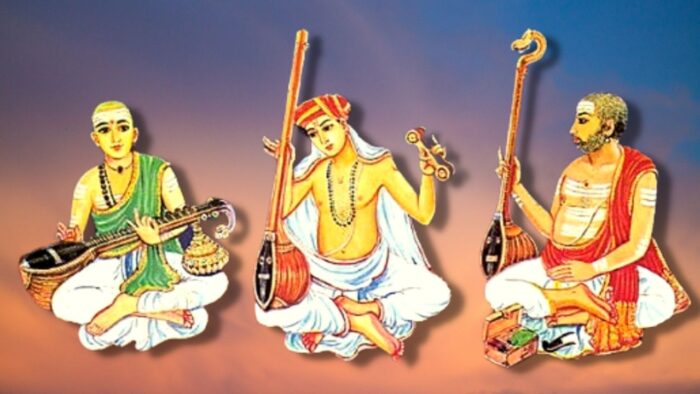 Launch of Dikshita Kshetra Darshanam, by Guruguhaamrta, a project which endeavours to produce high quality video documentaries combining the musical and other aspects of these Kshetras (places) that are also filmed at these Kshetras.

This project was originally conceived by classical vocalist, G Ravi Kiran, who is also the founder and Managing Trustee of Guruguhaamrta in collaboration with storyteller, arts, culture, history and heritage enthusiast, Madhusudhanan Kalaichelvan.

The first season, comprising a total of 6 episodes, that will be released on a monthly basis, each episode will be available for viewing, for free on Guruguhaamrta’s YouTube Channel and features a Dikshitar kriti sung by G Ravi Kiran and elucidated by Madhusudhanan.

The first episode premieres on March 24, 2022, to coincide – as per the Western calendar – with the 247th birth anniversary of Dikshitar. The first episode features the Bhaktavatsala Perumal Kshetra at Tirukkannamangai, near Tiruvarur and is supported by Indica Academy.

Speaking about this project, Ravi Kiran, who also juggles a career as an IT professional, says, “Dikshitar’s compositions lend themselves to myriad interpretations depending on what one seeks – his Kritis could be viewed as musical edifices, spiritual outpourings, travelogues of Dikshitar. Through this project, we are trying to look inside out from a Kriti to the context in which it is set.”

The decision to bring Madhusudhan on board was to tap into his expertise and passion for both Dikshitar as well as Architecture and heritage – it is a rare combination.

Over the years, Guruguhaamrta has been working to create a movement aimed at highlighting and propagating the legacy of Dikshitar through its various activities.

In the year of the pandemic, this not-for-profit trust, has also set up an Artist Support Fund through which Carnatic musicians from rural parts of Southern India were supported during these testing times.

Thyagaraja, Muthuswami Dikshitar and Shyama Shastry are regarded as the “Trinity” of South Indian Classical Music as they instilled a Renaissance in this ancient art form. Each of them had a unique approach to composing and writing music.

Muthuswami Dikshitar (1775-1835) was an “eternal pilgrim”. Even though he was born in Tiruvarur and later lived in Manali (near Chennai) and finally at Ettayapuram, he travelled extensively. In his early days, he was taken to Kashi by Chidambaranatha Yogi where he began his life long journey as a staunch Advaitin and a Devi Upasaka.

After his return from Kashi, he composed his first kriti (Srinathadi Guruguho Jayati) at Tiruttani Kshetra. During his life, he travelled to the various kshetras of South India. His kritis describe various aspects of the kshetras visited by him in intricate detail – including the references to Sthala Puranam, the iconography, the details of the other deities, the Kshetra Puranam, the Vriksha (tree) of the Kshetra, the Utsavams and the architectural details of the temple, apart from other intricacies.

Today, there is no authentic documentation where one could map, visually and aurally, the kritis with the details present in them – both explicit and implicit.  It is herein that Dikshita Kshetra Darshanam bridges the gap and lends a visual aspect to the aural beauty of these compositions.

Guruguhaamrta is a movement committed to the propagation and preservation of the legacy of Dikshitar. Guruguhaamrta is the brainchild of Carnatic musician G Ravi Kiran. a performing musician with several concerts, lecture demonstrations, workshops to his credit.

G Ravi Kiran has successfully been running this movement since 2009 and has conducted focused workshops, concerts and day-long events in India, Dubai and Australia (with SPIC-MACAY Sydney). These have been very well received by the student community in India and Abroad.