The Ocean of Churn 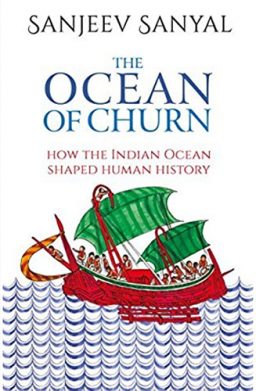 If history is to be written to make it accessible to the lay reader, the student, and make it interesting, Sanjeev Sanyal is one author I would pick. I say “one”, because I would also pick Michel Danino, but that is a different story and for a different book! Sanjeev Sanyal’s previous book, “The Land of the Seven Rivers“, was a grand, sweeping, and ambitious narrative of India’s history that tied it to the equally fascinating geography of Bharatvarsha. His 2016 book, “The Ocean of Churn“, goes one better in both scope and sweep. This time Sanyal takes the reader on a ride along the Indian Ocean, and ties together the histories of the lands touched by the mighty ocean. In doing so, he sheds light on several fascinating episodes that deserve a wider audience.

The span of attention and detail for Indian historians has tended to wane the further one goes away from Delhi – which explains why entire chapters in school history texts are devoted to Mughal kings, the Lodhis, the Khiljis, and what not, while a paragraph or two is deemed sufficient for grander and greater empires like the Cholas, Pallavas, or the Marathas. The empire of Vijayanagar, that was perhaps the largest and grandest empire in medieval India, is done away in a paragraph or two in most academic textbooks. In doing so, Indian historians have followed the template set for them by their colonial and ideological masters. Prominent characters in Indian history are either diminished or even erased completely from official histories. Therefore, Kanhoji Angre, a formidable naval commander is dismissed as a “pirate” by English historians, and barely talked about by Indian historians. Angre was a “Surkhail” or “Grand Admiral” of the Marathas, and for almost half a century, till 1756, the Marathas would be a major naval power on the Konkan coast, challenging and defeating on several occasions the English and Portuguese navies. In 1718 the East India Company would sail to Angre’s main base at Vijaydurg, only to retreat in just four days. Four years later, the East India Company would seek the help of the Royal Navy and the Dutch, only to be defeated yet again. Yet this great Maratha naval legend merits not even one line in many school history texts.

Kanhoji Angre is but one example of how the Indian Ocean has shaped human history for thousands of years, and in ways one may not have imagined – trade, martial, even marital, cultural, and later imperialist! The marital part is quite fascinating, and Sanyal opens his book with the story of how, in 731 CE, the death of the Pallava king, Parameswara Varman II, without leaving an heir, necessitated a journey across the oceans. From across the oceans, to a distant land today called Cambodia, a “delegation of Brahmin scholars” traveled and got back an heir that traced his roots to the Pallava family from five generations ago! Thus started the reign of Nandi Varman II! Equally fascinating is the story of how the Sinhalese came to Sri Lanka – the great-grandson of the king of Vanga (Bengal) was banished because of his errant ways. Vijaya, the great-grandson, took 700 of his followers, sailed south, landed in Sri Lanka, mended his ways, and ruled for many years. Truly a case of truth being stranger than fiction!

But if we have to talk of truly truth-stranger-than-fiction tales, my favourite from the book is that of how in the 17th century, a father named Naruttam not only saved his daughter from the lecherous demands of Periera, the Portugese commander at Oman, but also orchestrated a series of events that led to the eviction of the Portuguese from Oman!

“The Ocean of Churn” traces a near-linear temporal arc, beginning with dinosaurs (not exactly!) – but from the time before the Indian Ocean existed – that would be about 270 million years ago – to the formation of Gondwana (the name is derived from the Gond tribe of central India) and then on to the formation of the Himalayas. The Himalayas were formed by the collision of India with the Eurasian plate. This tells us that “the seabed that had existed between India and Asia was thrust into the sky. This explans why fossils of marine animals can be found high up in the mountain range.” As you read on, more fascinating nuggets come tumbling out. The rise of the oceans after the last ice-age meant that Kutch was an island, and that it would have also meant that “the Saurashtra peninsula was an island. Thus ships could comfortably sail through what are now the salt flats of the Rann of Kutchh and then make their way out to the Gulf of Khambat.” It is therefore no surprise that “two large settlements” were discovered in 2001 in the Gulf of Khambat.

Perhaps the most striking part of the book is how economics and geo-politics have stayed strong over millennia.

Geography played a strong role in determining how history evolved.

For several centuries, the Arabs very successfully managed to conceal from the Europeans the secrets of their trade with India. To directly trade with India, and cut out the Arabs, the Europeans had to find a sea route to India. Geography meant they would have to sail around Africa to get to India. When Vasco da Gama finally managed to find his way to India, he landed at Calicut. The brutality and sadism of the Portuguese seems to be quite something. The Portuguese under Vasco da Gama captured 10 ships and burned their crew in full view of the people ashore. On his second second voyage to Calicut, he captured 800 sailors and had them killed by hacking off their arms, noses, and ears. All so the Indians would agree to trade directly with the Portuguese. If India had thought the Arabs and Turks were the last of the savages to ravage India, they were mistaken – the Portuguese, Dutch, French, and English savages were only starting to make their way to India. Events today are little different from five hundred years ago – regimes are overthrown and hundreds of thousands of civilians butchered, all in the name of regime change, all for the sake of commerce.

History, in turn, was determined by commerce.

From Harappan times (that would be more than five thousand years ago), Indians were trading with places thousands of miles away. One of the largest and most powerful empires of south Asia would be the Chola empire, and we have the example of Rajendra Chola, who launched a major naval attack on the Sri Vijaya kingdom of Sumatra and Java in 1025. But it was not the pursuit of military conquests that motivated this naval battle. This was one heck of a major geo-economic-political game going on, involving the Indians, Chinese, and the Sri Vijaya kingdom. The Sri Vijaya were using the Chinese to strengthen not only their own position, but also gain control over both the shipping routes there. This, therefore, affected the Cholas, who had a robust maritime trade going on in that part of the Indian Ocean. A diplomatic mission by the Cholas to the Chinese in 1015 was followed by a massive Chola naval fleet that sailed in 1025. Commerce and geo-political interests decided history and geography – little different from geo-politics today, a thousand years later, as recent developments in the South China Sea eloquently attest.

Commerce was (partly) organized and financed by temples.

India’s maritime leadership slowly lost out to the Chinese and Arabs. This happened because of the systematic destruction of temples by the Turks, starting in the 11th century. Finance, which was conducted from temples, was destroyed, as was the money looted. A visit to Mahabalipuram near Chennai is strongly encouraged. Why Indians withdrew and ceded ground, almost completely, is still somewhat of a mystery, and Sanjeev writes he has been unable to find a satisfactory answer.

Commerce influenced the evolution of the cultural mores of the society.

How come matrilineal genealogies are so strong in some places like Kerala? It is because of the long sea-faring tradition of those places. Therefore, with the menfolk out on the seas for long periods of time, the women ran the families. Matrilineal linkages were important there – whether it was the Nairs in Kerala or the Bunt of Karnataka. The first Indianized kingdom of South East Asia – the Funan kingdom in the Mekong delta – itself has a surreal story where a Naga princess (who was also a pirate!) has an encounter with a ship that has a handsome Brahmin boy, and thus we have the founding of a dynasty! And why were those ships on the high seas? Because India had a long and strong maritime tradition.

History has been written by the victors.

Victors do not like to be reminded of the people who had the better of them – the example of the wiping out of Kanhoji Angre from history texts is but one example. Nor do victors like their subjects to be reminded that it is possible to fight back against the colonials. Therefore, while there is no end to paeans penned on the effortless, almost bloodless victory that Robert Clive secured against Siraj ud Daulah, establishing the English rule and loot of Bengal, the Indians learned almost next to nothing about the Dutch, who were as active in South Asia as the English. Is it because it was not the English but an Indian who delivered a crushing blow to the Dutch, sixteen years before the battle of Plassey? That person was Martand Varma.

History continues to be written by the mentally enslaved for the mentally enslaved. “The Ocean of Churn” is Sanjeev Sanyal’s continuing and gentle attempt to shake Indians from their stupor and look at history afresh. It is breathtaking when one surveys how history, geography, and the history of arthashastra (economics) in India have been taught – each divorced from the other.
Source: http://blog.abhinavagarwal.net/2016/10/ocean-of-churn-by-sanjeev-sanyal-review.html