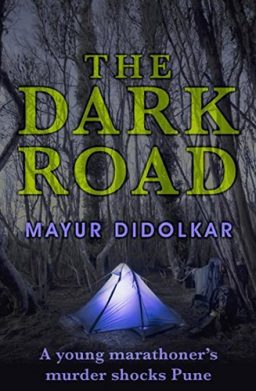 The Indian Literary space is dominated by romance, finding yourself, relationships and coming of age sagas  the whole nine yards of sweet corn syrups and then some more. Most of them are dreary and boring. Mostly, they are not close to reality and pander to the narcissistic instinct of the social media generation.

Then, once in a while, like the door creaks in the old mansion [pun intended] comes along a riveting suspense drama, which has a different take on human emotions and while it is doing that, also keeps you on the edge of your seat.

I am talking about the book named The Dark Road by Mayuresh Didolkar.

Mayuresh is a Financial Manager at his Day job in Pune when he is not strutting his stuff and jolly good stuff it is!

The Dark Road is in the mould of Roman Polanski’s  Chinatown, I kid you not. It is that good. It is essentially a murder mystery in the Whodoneit genre , but it also a modern take on modern, dysfunctional relationships.

Who are the characters in the book Dark Road?

Sanjyot Pathak  A young girl and a marathon runner. She is found murdered in mysterious circumstances at a camp site in Kolhapur.

Mr and Mrs.Pathak- Sanjyot’s parents, with whom she shares an extremely troubled relationship.

Kunal Darekar is a left-leaning , short-tempered [almost madcap] married man  with whom Sanjyot shares her heart and, the bed too.

A woman private detective  Mrs.Prasanna Killedar , the protagonist of the book.[Formerly with the police, retired as Assistant Commissioner of Police] employed by a millionaire extraordinaire  Siddharth Pandit to investigate the circumstances surrounding Sanjyot’s murder. Prasanna is resourceful and meticulous. Her meticulousness ultimately helps her in finding the real killer.

Siddhartha Pandit  godfather, friend, philosopher, software baron and guide to Sanjyot Pathak. He is the only bright spot in Sanjyot’s short, sad & unhappy life. He is also an expert marathon runner and trains Sanjyot in running.

Weda Shukla a political leader who has high ambitions and uses questionable means to achieve them. [Naxal Undertones here]

What is the big hook in this book?

The female protagonist in the big, bad world of men and her supreme skill in navigating through the Kafkaesque maze of male hierarchies. You immediately start rooting for Prasanna you feel her struggles and there is an instant connection with her character. You can sense a duality in her character  the professionalism with which she investigates Sanjyot’s murder and her concern for her daughter as a single mother. She also has her gang of besties- with whom she likes to share a peg of the finest scotch and more. She shares some funny moments with them  Didolkar excels in these moments and displays sardonic wit.

Some readers might argue that the Naxal movement is shown in rather a poor light  but to be fair, it is presented in an absolute blunt fashion and presents a realistic view of such movements.

Didolkar shows rare skill here  writing a book from a woman’s point of view and that too with lan. He is not preachy nor does he judge and that filters through Prassanna’s view-point.

Not for once does the story slip up  the story moves at a riveting pace as Didolkar takes us through a tour of Pune and subtly introduces us to the evolved trekking culture of this city.

To be fair, the more discerning reader will get an idea of who committed the murder, but still would want to continue to know the why? Didolkar does not disappoint here also. The ending is believable and is also a lesson in introspection.

The book ends on Prassanna reminiscing about girls like Sanjyot who are dragged in a quagmire of emotions and circumstances  much similar to Polanski’s JJ Gittes whose friends tell him,  Forget it Jake, It’s Chinatown You also want to shout out loud at her, Forget it Prassanna, you will never get why girls like Sanjyot behave the way they do.