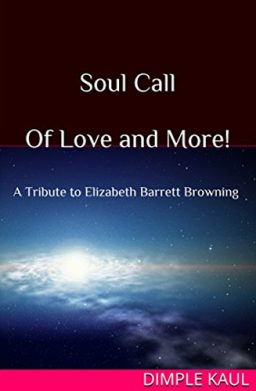 Soul Call – of Love and More is a tribute by Dimple Kaul to the poetess, Elizabeth Barnett Browning. Dimple writes, Many Years Ago, I chanced upon her How do I love thee?. It resonated with me. Made me ponder over the emotions beneath those words.

Elizabeth started writing poetry from the age of six. At 15, she became very ill  an illness which contributed to her weak health and possibly, also contributed to hear death in June 1860, at the age of 55. Elizabeth was introduced to literature by her cousin John Kenyon, who is now known as a patron to Robert Browning.

Elizabeth’s volume titled  Poems brought her great success, attracting the admiration of then already famous writer  Robert Browning. The couple’s correspondence and their courtship is indeed, very well-known. However, her most poem can be thought to be, How do I love Thee?.

This poem is also the source of inspiration for our Author and poetess  Dimple Kaul. She notes that, this was the poem which made her into an ardent admirer of Elizabeth Barrett Browning.

It is noteworthy that, in spite of having a busy schedule writing articles on politics, society and history  she has written down twenty poems on the topic of Love.These poems describe the entire range of emotions, a person feels when they are in love. A short description of the poems is given below:-

The book is short and makes for easy reading. Also, much credit goes to the Poetess, Dimple Kaul for making us experience in a short time frame  the crests and troughs one experiences when in love.