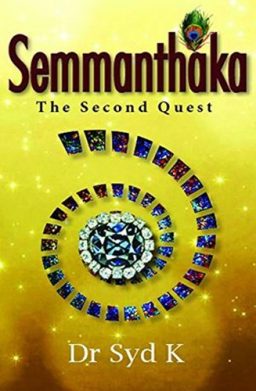 Semmanthaka is a clear dedication to Lord Krishna and his countless devotees. It is a story about a Gem that has been travelling through time through many Yugs.

The story begins thousands of years ago during the time Lord Krishna had his first birth. There is a Canadian NRI who is possessive about worldy treasures and enjoys looking for new ones. He hires an archaeologist Dr.Baalan to search for this gem which had been lost ages ago. According to him, the city of Dwarka where Lord Krishna lived, had been buried below the sea during a tsunami and that if searched properly , the gem might still be found. This Gem had the quality of producing gold every day thus making its owner rich beyond comprehension.

Dr. Baalan alongwith his assistant Yogi agree to his project and start looking for it. This is when they realize that the gem which they have been hired to search for is no ordinary gem. It has its descent from Lord Krishna and it has travelled 4 yugs. They meet a holy man, who guides them on how to get the gem and this gem will prevent the world from facing a major calamity. This now no longer becomes a commercial quest, but a quest which will save the world. The onus now lies upon Dr. Baalan and Yogi on how they would go about hunting for this treasure.

The narration of the 4 yugs is very clear and one can visualize each and every scene the author is trying to communicate. The story begins with how the gem came into existence in the first place, then how did it disappear and how it reappeared in every yug until it is retrieved by Lord Krishna himself in the present day. The gem travels through the period of Mahabharata to Chandragupta Maurya to Chatrapati Shivaji and to Netaji Subhash Chandra Bose! Dr. Syd has cleverly interwoven the important historical episodes with his fictional story and makes us believe that for every important historical event that occured, Lord Krishna had a direct influence on the result. If he wasn’t there, history would have been different and the world would have been different.

The author is clearly passionate about wild animals, in the sense the description of each and every animal, their movements, their fights is described in detail and with utmost precision.

Overall it is a story that will make you witness history in its best form. Beautifully narrated, edited, and a type of story that will keep you intrigued and glued to the book and wonder what would happen next. Writing a tale that spans across thousands of years and to connect the reader with it is a mammoth task and the author has done it successfully here.

Absolutely recommended, and would definitely look forward to the next quest Dr. Syd will be engaged in.