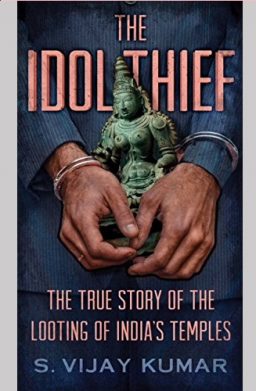 As an art lover I’ve spent major part of my time in attending talks and walks by historians, predominantly in temples of Tamil Nadu. I have always been awestruck by the magnificence and workmanship of our humble anonymous sculptors and temple builders. Reminding myself of the “moola kaaranam”(primary reason) i.e., the kings of our ancient land, I was struck by their virtue and bhakti to the Gods, without which they couldn’t have come up with a beauty like those found in temple sculptures and iconography. While gazing into that amazing lost world, I’ve felt extremely helpless and disappointed whenever I hear about the theft of idols and iconography from  the Temples. There isn’t ONE idol thief but multiple channels with many people aiding and abetting in the theft. The government bodies controlling the magnificent Temple structures, the Devasthanas, our places of worship, especially in Tamil Nadu show extreme apathy and sheer ignorance. One can only get depressed when we see ghastly fluorescent paints, fancy vitrified tiles, lights and fans in a 1000 year old structure. My time in Westminster Abbey in London and Shakespeare’s Home town at Stratford Upon Avon was in fact spent more on a parallel thought: Why aren’t we Indians taking pride in our own heritage structures which are much older than most European places of worhsip?

The book “The Idol Thief” by S. Vijay Kumar, will take you through varied emotions. After a prologue taking us back in time to the glorious era of the Cholas, the author’s detailed insight into the lavish life of Subhash Kapoor enables the reader to understand the global nexus and the methods the collectors adopt to shift the priced and exquisite ancient bronzes from small villages to the Museums such as the ones in New York ad New South Wales. The description leaves one teary eyed. The first case deals with the Suthamalli and Sripuranthan (Tamil Nadu) Bronzes. The “biggest heist of Chola Bronzes in history” is planned by Sanjeevi Ashokan, a local art dealer who knew “topography of ancient temples of Tamil Nadu like the back of his hand”( if only this nformation was used for a better purpose!) The unfortunate event was carried out by our own people, the locals, coolly shipping the idols to New York via Chennai for over a Crore of rupees as the value.

The book chronicles the pathetic neglect of the ancient temples by the Hindu Religious & Charitable Endowments department. Many Temples today are literally just a ruin. And that’s exactly what makes it a treasure trove for the art smugglers. The author Vijay Kumar has exposed the relationship between Subhash Kapoor and Sanjeevi Ashokan which goes beyond thee bronzes, the loopholes and contacts in the entire system helps them route the idols from Indian shores across the word without being caught. But despite many corrupt officials the Indian bureaucracy also has some good honest officers on its payroll.  The Idol wing had one such honest Deputy Police Inspector (DSP) who got into action and ensured that Subhash Kapoor and the group were caught. The DSP and his team encounters]ed failed arrest attempts, at close quarters, thanks to the leaked information from an insider. The Idol Wing did not recognize the Suthamalli thefts to Subash Kapoor, until they get a clue from another theft. The eventual discovery, lead to the arrests after a long chase, an ex-girlfriend nailing him and difficulty in establishing proof to the origins of the Bronzes and his purchases from the smugglers.

Shri Vijay Kumar, the author who is an art enthusiast used his study and source along with the enthusiastic group (An officer from US Immigration and customs who encountered an abandoned shipment earlier) did a magnificent job of identifying the stolen Bronzes, across museums in the world, and establishing the proof which eased the efforts of the Police. The author and his team studied various pictures from Museums and collated the data with historical information about the location of the idols and iconography in various Temples to prove the thefts.

Other similar thefts and recoveries are detailed in the following chapters. The book reflects how shoddy and indifferent the Indian government are to these thefts, the corruption in the departments like idol wing of Police, HR&CE, external affairs, customs etc, the glaring lack of archives on our invaluable treasure and importantly the attitude of top Museums who purchased the sculptures from Subhash Kapoor. Not to forget that some of the thefts were as recent as 2006. Suffice to say that this is a MUST read if you take pride in our heritage.

At this point I have two pertinent questions-

It is high time we woke up from our slumber and work towards preserving our precious heritage.