How India Sees The World from Kautilya to the 21st Century 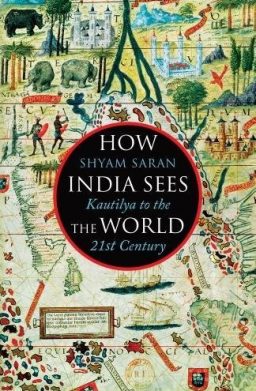 How India Sees The World from Kautilya to the 21st Century is a part memoir, a part history and a part description about India’s foreign policy that has been shaped because of this history. Written by one of India’s foremost diplomats Shyam Saran who served as the Foreign Secretary of India between 2004 and 2006, it takes a historical worldview of India and describes the tenets of foreign policy of the country. The book is basically divided into three parts.

In the first part, the author gives a historical background regarding the foreign policy and statecraft in ancient India built upon ancient texts such as the Arthashastra which he describes as undoubtedly the most important Indian treatise on statecraft. Kautilya or Chanakya was the counsellor and guide to Chandragupta Maurya, one of India’s greatest ever emperors and the founder of the Maurya Empire. The author observes that the Arthashastra dedicates quite a large section in it to foreign policy and the backdrop is highly suited to the modern, multipolar or multistate world that we are in today. Although the book by Kautilya was written from the perspective of a conqueror, the author opines that its principles hold true for any state for that matter.

The author describes another work of ancient India which is relevant to diplomacy, the Nitisara of Kamandaki. In both these works, the mandala serves as a conceptual framework for examining interstate relations. It is interesting to note that Kamandaki dedicates one whole chapter to the role of diplomacy and diplomats. The chapter is rightly titled “Dutapracana”. The author laments the fact that when he joined the Indian Foreign Service (IFS) in 1970, neither he nor his colleagues were aware about India’s incredible contribution towards foreign policy and statecraft. They had to rely only on British works such as British diplomat Ernest Satow’s A Guide to Diplomatic Practice. The author describes the eminent role played by India in its extended neighbourhood ranging from West Asia to South East Asia from a historical perspective and the various exchange of information and communication that took place between them. Finally, the author sheds light on Indian foreign policy under the British Raj, early independence era, the Cold War era, and the Post-Cold War era.

In the second part of the book, the author focuses on the subcontinent and the neighbourhood with emphasis on China, Nepal, and Pakistan. The author served as an Ambassador to both China and Nepal so he uses his experience that he gained over there to good effect and make us understand the various issues that these two states have with India and the historical background for it. The issues between India and Pakistan; and between India and China are pretty well known but it is interesting to read through the paradoxical relationship between India and Nepal which is quite strange considering the close cultural and historical links between the two, particularly considering the fact that the two nations have the highest proportion of Hindus in their total population. The political leadership in Nepal has often tried to antagonise the people of Nepal with respect to India at times in the context of nationalism and to get a political mileage out of it. However, despite all this, India is viewed positively to a large extent and apparently about six to eight million Nepalis live and work in India. Also, India has been successful in leveraging its considerable assets to influence the political calculus. Although Nepal has often tried to play the “China card”, India maintains significant influence on Nepal and is the largest trade partner for that country.

In the third part of the book, the author gives a perspective of India in the wider world particularly covering his experience of representing India at the global level at climate change summits and the historic Indo-US Civil Nuclear Deal wherein he was directly involved, first as the Foreign Secretary and later as the Special Envoy of the Prime Minister dealing with nuclear issues. Almost three chapters are dedicated to the whole process during the course of which this historic deal was finalised. The reader will appreciate the painstaking efforts taken by our diplomats to ensure that the deal passed through every hurdle it came across, right from the negotiations stage between the two countries to getting the approval from the NSG and the IAEA.

Getting the approval from the NSG was the most challenging part of the deal according to the author who mentions that Indian diplomats made all out efforts in discussing with all the member states of the group. At the NSG meeting in Vienna, Russia was a constant support as was Australia who’s then Prime Minister John Howard had unambiguously expressed his support to the author. Brazil despite its initial reluctance became one of India’s strongest supporters at the NSG and its neighbour Argentina also supported India despite China making a demarche to it arguing against an India specific waiver. Although Japan has serious reservations against nuclear issues having been the only country against which nuclear weapons have been used in war, it did not oppose a consensus in favour of India at the NSG. India benefited from the support that it received from South Africa, Mexico, France, and the United Kingdom.

It was the “like minded” countries that the author uses to describe Austria, Ireland, the Netherlands, Norway, New Zealand, and Switzerland that were strongly opposed to the deal. They even issued a joint statement strongly criticising the nuclear deal and described it as the death knell for the NPT. It was here that the United States pitched in. After some strong arm-twisting by the US, these “like minded” countries finally relented. As the US put pressure on its allies, India made a further demarche with China and this time, France, Britain, and Russia also pitched in. Finally, China relented as it did not want itself to be seen as the last one left standing. The nuclear deal was instrumental in ending India’s isolation from nuclear matters. After the Indo-US nuclear deal, India has managed to sign similar agreements with France and Russia. India has since then also become a part of the Australia Group, the Missile Technology Control Regime (MTCR), and the Wassenaar Arrangement. It is worth noting that China which is opposing India’s entry into the NSG is not a member of any of these three groups.

I have always maintained that George W Bush has been the best American president as far as India is concerned and my views were reinforced by the author’s observations in which he says that President Bush personally intervened at various stages whenever it seemed that the two parties had reached a deadlock. The personal equation between President Bush and Prime Minister Manmohan Singh was crucial according to the author in ensuring that the nuclear deal materialised.

In the final part of the book, the author tries to assuage the concerns regarding the rise of China, particularly in our extended neighbourhood and in the Indian Ocean. He says that it won’t be easy for China to become a superpower exhibiting influence all over Asia Pacific. There will be opposition to China and India is already improving its relations with like-minded nations who have equal concerns regarding China, such as Japan, Vietnam, Australia, South Korea, Indonesia, and of course the US. The author champions the cause of a multipolar world and emphasises that it would also serve India’s interest as well. Highlighting the major difference between China and India, the author quotes the Rig Veda to describe the coexisting, universally accepting nature of India which distinguishes it from China’s policy of seeking domination over the world: “Ekam sat vipra bahudha vadanti”. Truth is one but sages call it by different names. Finally the author upholds the principles of Kautilya and Kamandaki and deems them to be relevant even today. The author states that these principles are valid even in today’s transformed world although they were first formulated hundreds of years ago.

(The book can be brought here) 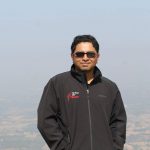