The Indic Creative Narrative – A Philosophical Base & Meta Universe 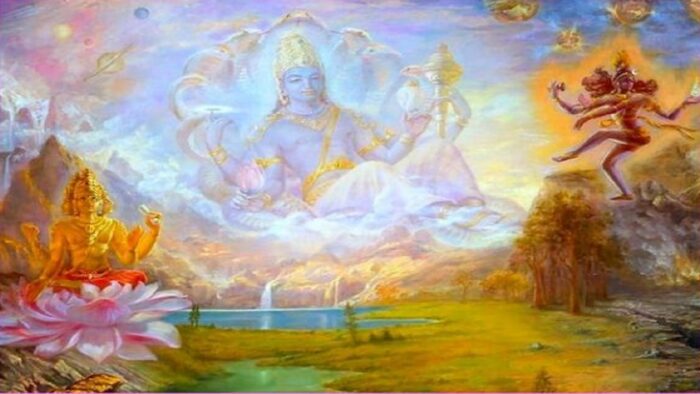 Prose Fiction as a literary genre is a highly evolved form. It is one of the important innovations of the Modern times. Life has significantly moved from Poetry to Prose in the Modern times. The Modern ‘Novel or Fiction’ is the most representative form of the Prose. With it, expression moved from the lyric to the narrative. Lyrical metaphors which adorned poetry as beautiful ornaments became pearls spread in the ocean of the Narrative. However, the latter has created its own “Narrative Metaphors”, far more invisible and equally impactful, which now reign supreme. Thus, the modern man is more of a prose/narrative man than a poetical/lyrical man. This has huge implications for every civilization and ought to be the subject of a different paper.

Ancient poetry across the world evolved its own grammar and poetics. Bharatavarsha anchored its poetics centred around the Natyashastra and Alankara-Shastra, deriving inspiration from Vedic poetry. However, principles of Indian Poetics are applicable equally to prose and poetry. The ‘Champoo’ form of literature is a mixed form – a composition of poetry and prose which has emerged from within the same poetics of our Shastra-s. In addition, our stalwarts of Indian literature who wrote in Bharateeya-Bhashas, to their credit, evolved our own narrative form – a mix of ancient Indian poetics, western narrative forms and some innovation to synthesise the two.

However, before we could reflect our poetics onto the Modern Narrative Plane, the west moved leaps and bounds. It has evolved an exclusive Narrative Theory of its own which has come to significantly influence the modern expression. As our innovation in the Bharateeya-Bhashas did not translate itself into a Theory and Practice built on that Theory, the west has also begun to influence our writing. This influence, more visible in Indian writing in English where it started, is now spreading across our Bhashas.

As a result, we have lost our generative capacity to shape our own narrative forms. Our universities now teach western narrative theory. This theory is drawn from the experience of the way the west evolved as a civilization. As a consequence, not just India, societies world over are gradually imbibing a western way of thinking in their narrative construction. Indic Fiction is no exception. There is plenty of literature in western narrative theory that further deepens the access and the evolution of this theory. In recent times, one can see the influence of Joseph Campbell’s work in the novel form [Ref: A Hero with a Thousand Faces – Joseph Campbell].

There is an opportunity to create our own Theory of Narrative drawn from our rich tradition consisting of our Philosophy, Poetics and Performative Traditions. The Modern Novel, a representative form of the prose, can be characterised as a collection of character-journeys in complex engagement with each other. It needs a Bharateeya philosophical foundation from which we can imagine diverse character journeys and engagement. In many ways, such journeys are available in our epics, classical literature and folk literature. However, we need to bring them to the modern forms of novels and short stories.

This paper aims to create a philosophical foundation and a meta universe for the Indic Creative Narrative, drawn from Indian Thought, within which such journeys can be imagined and carved.

In the Bharateeya Parampara, the Chaturvidha Purushartha drives one’s life. From the western stand-point, it can be termed as the equivalent of an axiomatic fundamental. All traditional Indian texts have Purushartha as their underpinning. It is often not stated but assumed as an obvious reality. The perspective of Chaturvidha Purushartha and its origins are explained in detail in the paper – Vedic Origins of Sustainability and Environmentalism. This section provides a brief summary as required for this paper. It consists of four elements as given below.

It is important to note that Kama and Artha are subservient to Dharma in this framework. That in our pursuit of security and desire we may run amok and create significant conflict is part of the deep rooted wisdom of Bharateeya Parampara. This has two reasons

These six Arishadvargas are considered as our enemies – fundamentally arresting our progress in the path of Moksha. We must recognize two important points in these Arishadvargas.

Chaturvidha Purushartha is a framework for one to go about with life. In other words, one’s indulgence in this framework or the abstinence paints one’s journey in life. It’s a complex plane on which our life becomes a multi-dimensional trajectory.

This philosophical perspective is not incidental or accidental, though. It is drawn from the larger trajectory that Bharateeya parampara desires for the collective Universe of life. That is described by the principle of Srishti-Sthiti-Laya, described in detail in all Vedic texts including the Bhagavata. It can be minimally described as given below.

This worldview is beautifully translated into daily life by the Bharateeya Parampara through the Purushartha. It is drawn from Srishti-Sthiti-Laya in the following manner.

Using this foundation and framework, Modern Creative Literature can paint complex narratives and draw a rich set of characters.

A Meta-Universe is that which

These principles determine the navigation within that Universe and help us to paint a trajectory of life in time. Theoretically, a Meta-Universe contains within an infinite number of specific universes.

Every creative fiction operates in a specific universe. A Meta-Universe should be potent enough to be able to craft any specific universe. The elements and principles should serve that purpose. Such a specific Universe consists of a definite set of contexts (Vartamana), characters and a distinct movement of time. The Meta-Universe is a collection of all such possible universes i.e., infinite universes articulated through elements and principles.

Meta Universe from Srishti-Sthiti-Laya and Purushartha

Srishti-Sthiti-Laya and Purushartha lead to a Meta-Universe of life that distinguishes itself from other cultures. Here is the Meta-Universe that emerges from the same.

Life journeys in this Meta-Universe

In the Meta-Universe of SSL-Purushartha consisting of Sthiti-Nodes, Non-Sthiti-Nodes and Laya-Nodes what constitutes an ideal journey of life? A sense of ideal journey determines what is culturally aspired for and becomes a north star. It also helps to draw a rich set of deviations.

With this vision of life consisting of many Sthiti-Nodes, we have a rich set of ideal life journeys. Completely different life journeys can be ideal at the same time without being the same.

The Application of this Meta-Universe in Creating Writing

How is this Meta-Universe helpful for creative writers? Let us assume a novel/story consisting of different characters.

A creative narrative then paints the journey of each individual, family, community, state etc., and their Purushartha journey in a specific universe from within this Meta-Universe. These journeys will be a complex result of answering many such questions from the Purushartha framework.

Thus, a Creative Fiction then becomes the journey of individuals and communities operating within the Purushartha framework and striving for a path of Sthiti-Nodes.

A Diagrammatic representation of the above world view

What is the journey of the Hero of a Novel

One of the biggest elements of Plot construction is to paint the trajectory of the Hero/Protagonist as that determines the larger trajectory of the work in the modern novels. The rest of the Paper is dedicated to building a framework using which a Hero’s trajectory can be drawn.

The journey fundamentally is one of the extent of success in moving from a Lower-Sthiti-Node to a Higher-Sthiti-Node.

Assuming that the context is determined by the Self, Family, Community and Universe we have 16 Starting Nodes and 16 Ending Nodes as listed in the table below. This essentially means we have 16*16 which is 256 different possibilities just from the Start and End Nodes stand-point. 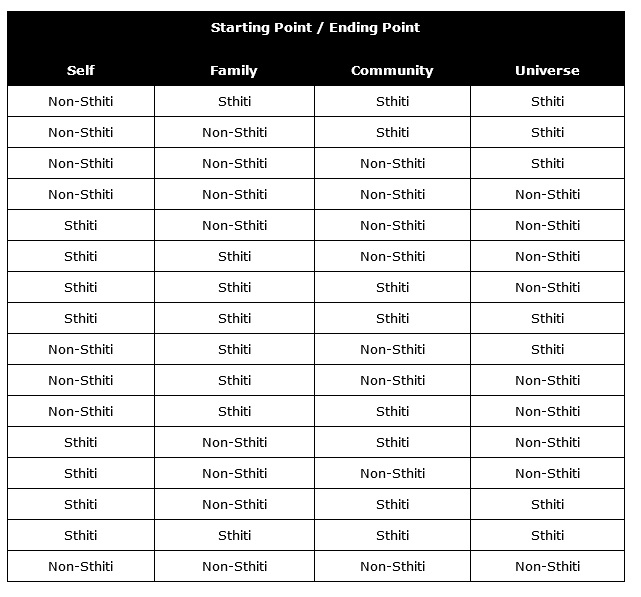 The world is not ideal though and most will never be in a Sthiti state. Between a Sthiti-State and a Non-Sthiti State it is always a very wide journey. Similarly, the journey between the start and the end state would be one of a series of intermediate states where they would be in one of the above 16 states.

Thus, the creative room is big and wide open for a writer to pick a starting date, determine the series of intermediate states towards an end-date. Around this one builds a set of characters and the Indic philosophies provide a basis to imagine characters with specific Tatvas (Satvika, Rajasa, Tamasa) who have a specific orientation of Artha, Kama resulting in rich possibilities, which we shall be covered in a subsequent paper.

Finally, any new framework must articulate how it differs from the convention and defend the value proposition.

The SSL-Purushartha framework provides a way of imagining and representing a trajectory of a novel/fiction and its hero differently. However, does it really result in any substantial difference from artistic and cultural stand-points? Here are some differences.

Thus, the SSL-Purushartha framework provides an opportunity to visualise a different universe of life with different character journeys. Apart from being culturally aligned to Bharateeya Parampara, it expands the universe resulting in more diverse journeys and characters.  These can already be observed in ancient Indian classics and many modern Bharateeya Bhasha novels.

This paper, though, presents a simpler version of the Indic Creative Narrative that can be drawn from the SSL-Purushartha framework. It further needs to be expanded using the Arishadvargas, Yagna, Tapas, Karma, Satva-Rajas-Tamas so that we create archetypes and apply them to modern contexts.

This paper is a step in that direction.