Sculptural Positioning In Rājarajeshwaram – An Aesthetic Expression Of Agamic Cosmology 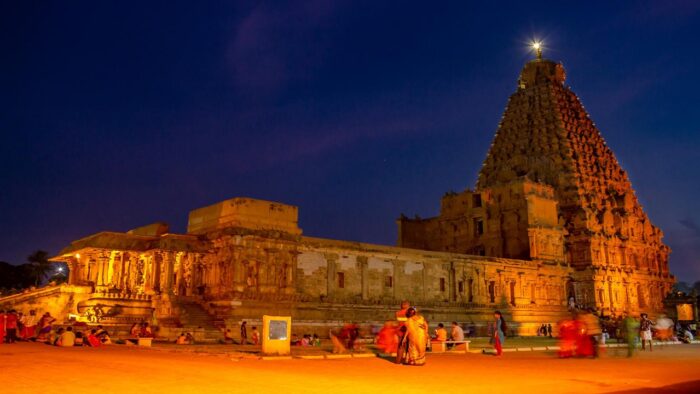 Sacred art is not sacred just because it represents a sacred theme or is placed in a sacred context such as a temple. It is not only the form, which makes it sacred, or the ritual which transforms it, but the material itself partakes of the sacred and is so to say its basis (ādhāra). Unless even the gross matter such as stone has the inherent nature of divinity, it cannot become an instrument and expression of divinity, as is the case of mürti or temple. In the order of tattvas or categories of the universe, they belong to the earth category (prthivi), the lowest in the scheme of 36 tattvas.

In his commentary on the Paratrisika (Tantra), Abhinavagupta shows in a subtle way the inter-relatedness of the tattvas, according to the principle Sarvamsarvatmakam, “everything is containing everything else”. He interprets the Agamic theory in a way to arrive at a comprehensive understanding of reality and of language. Instead of speaking of hierarchy it is rather a theory of inter-connectedness and of reflection, which he develops. On the one hand every tattva is complete in itself.

Brihadishvara temple at Thanjavur (Tanjore), originally called Rajarajeshvara, was built by the Chola emperor, Rajaraja Chola I. It is the most outstanding temple that was meticulously planned on a grand scale. Every aspect of the temple – its architecture, sculptures, images, bronzes, inscriptions etc. – was pre-planned as to where to position each and how it had to be articulated with the central image, Rajarajesvaralinga, serving as the central point. Chola architecture is at its peak here, it reached such heights that you can almost call it the Himalayas of Chola architecture.

Rajaraja-I received his Sivadiksa from Isanasiva Pandita and has was conferred with the diksanama – Sivapadasekhara. Isanasiva was an authority on Siddhanta Saiva and his manual Isanagurudevapaddhati is still considered as an authoritative text on Saiva Agama.

Every temple is guided by procedure laid down in a particular agama. The present temple follows the Mukutagama, and therefore the entire edifice is guided in its design by the philosophy and rituals of Mukutagama.

The Brhadisvara Linga is an imposing structure composed of:

Being installed and consecrated by men, it belongs to the Manusalinga category.

The linga-pitha belongs to Padmapitha variety. With its ratio of 3:5 to the width of the garbhagrha, this belongs to the Uttamottama Linga, the foremost of the lingas.

According to the Mukutagama, the supreme form of Lord Siva is Paramananda Tandava Murti, the supremely blissful cosmic dancer. He is invoked in the Brhadisvaralinga as dancing above the nine principles (nava-tattvas). 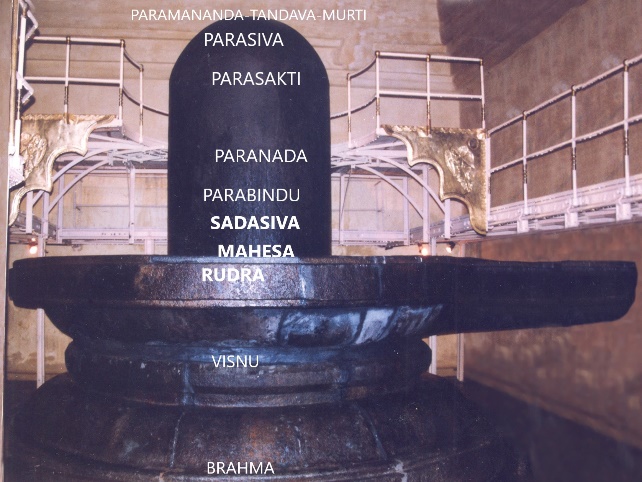 According to Mukutagama, the vacuum or space above the main linga of the temple was considered as the dancing form of Siva, the Paramananda-Tandava – Murti or Adalvallan. The linga inside the garbhagriha (sanctum) represented the manifestation of this dancing form.

The Paramananda-Tandava-Murti was represented by the inner vacuum above the lingabera. The Nrtya-Karanas which are sculpted along the vimana’s inner wall in the second level too suggest this representation. When we know the central philosophy of Mukutagama, one would not be surprised that the Nataraja was one of the favourite theme one comes across in the Brhadisvara temple.

An inscription refers to Rajaraja’s gift of a metal cast image called Adalvallan. It is also the name of the inner space within the Garbhagrha. 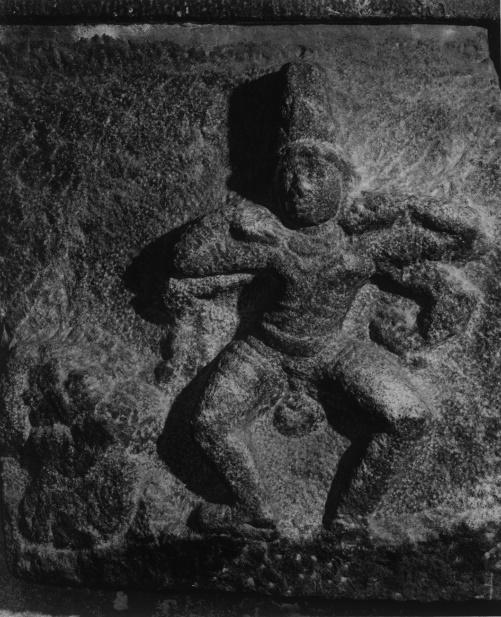 Arrangement of Devatas as per AVARANA

In the First Avarana – outer circle Astra Purushas, in the Second Avarana the sculptures of DasaLokaPalas( Guardian deities), in the Third Avarana- AstaGanesvaras, in the Fourth Avarana- AstaVidyesvara and in the last Avarana called the PancamaAvarana – GarbhaGrham ( Sanctum Sanctorum) 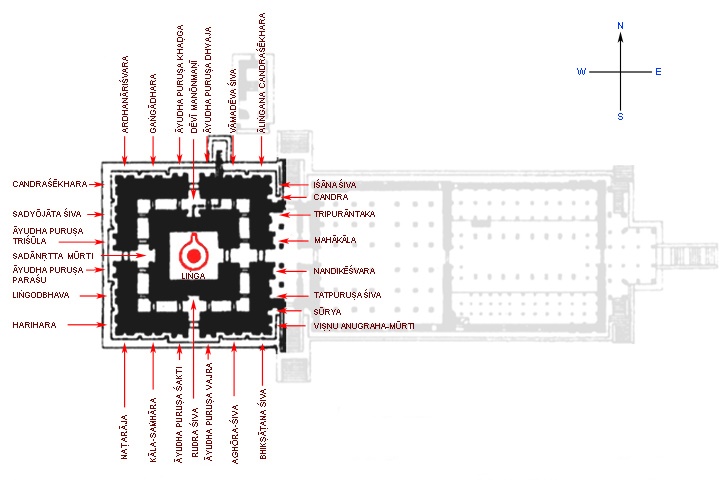 The foremost characteristic of the Brihadishvara temple is its layout and orientation and also the distribution of its various shrines. As far as the main vimana is concerned we have different groups of deities represented on the walls, like Siva or Chakradana-murti, Nataraja, Bhiksatana, Ardhanarisvara, Lingodbhava, Gangadhara etc. This is one circle of the conventional deities which are distributed according to the agama.

According to Siddhantha, the Linga is called Sadasiva.

Sadasiva assumed 25 forms for the benefit of the creation and these are called Mahesvara murtis.

They are classified as:

The main SriVimana over the two-storeyed Garbhagrha belonging to the sandhara variety (having inner and outer walls with intervening moving space for pradaksina) along with mahamandapa and two Gopuras, were built in perfect symmetry following the Agamic code and philosophy. The distribution of other icons in the various kosthas and pillars too follows the same planning.

Rajaraja-I called the vimana of the temple as Dakshinameru, the Meru of the South.

The term ‘Meru’ has three-fold significance from the –Sacred Geographical point as described in Puranas, Spiritual point as treated in Agamas, Architectural point as seen from various inscription and Architectural treatises. The nomenclature also suggests that Mount Meru which was also called as Rajaraja in the Mahabharata would also speak of the king who bore the same name. 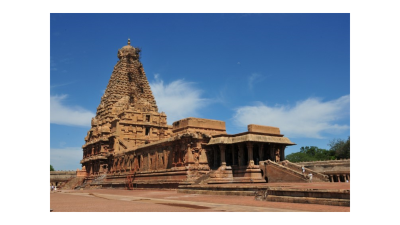 The king says that ‘I built it of stone’-

Kaltali – Kaltali means kal-tali, tali means temple, kaltali means stone temple. From base to the finial this temple was built of stone. This is called the shuddha (pure) type of architecture where you use only one material for constructing the whole vimana. In this case it was the granite stone, and this is considered as the best form of architecture for a temple.

Meru according to Puranas:

Meru, with its three lofty peaks is the abode of Supreme divinity surrounded by eight smaller peaks called MaryadaParvatas inhabited by the Lokapalas.

Meru as per Agamas-

Starting from the base till the stupi, there is a correspondence to the Sad Adhvas (six paths/manifestations)

From Top to Bottom they are:

That Meru, was a nomenclature for the conical tiered structure of Vimanas can be seen from many inscriptional references like Bangadh inscription of Nyayapala.

It was considered as the best type- meruprasadaHuttamaH

amongst the three types of Vimans namely- Meru, Kailasa and Mandara types.

The beauty of the Hindu temple lies not only in the artistic depiction of the craftsmanship, which are like the alankaras embellishing the poetry, but also in realizing supremacy of the Isvara, to whom the entire complex is dedicated. This is the atma- the soul, which is suggestive.

The key to the recognition of this suggestion lies in the Agamas which are indispensable towards understanding the grandeur of the entire plan – be it the cosmic Sad-adhvas or the micro-cosmic Devalaya.