Text As The Metaphoric Body: Incorporation Of Tripurā In Saundaryalaharī – Part IV 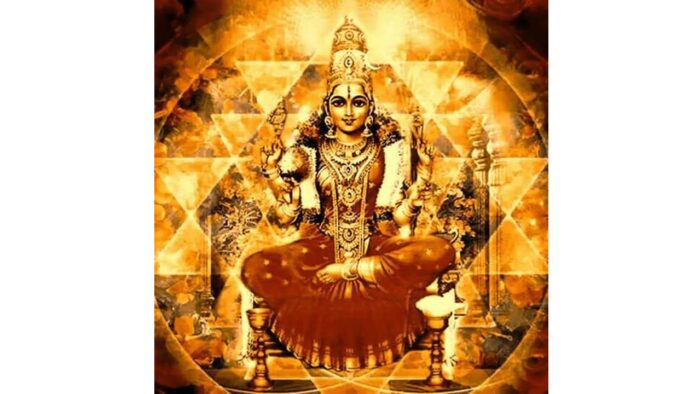 The Divine Body of Metaphors

It is reasonable to conclude that SL constitutes three bodies of the goddess: the first section identified as Ānandalaharī generates the esoteric experience through ritual visualization, mantras and maṇḍalas, philosophical speculation, and the practice of cakras and Kuṇḍalinī. This section is linked with the surge of bliss that occurs through the rise of Kuṇḍalinī, and the relation of this passage to mystical bliss is explicit even in the very title of the text. We can consider this as the mantra body of the goddess which is concealed within. The constituents of this body are mantras and maṇḍalas. The second section of the text that is also identified as Saundaryalaharī (the name through which the entire text is known) brings to prominence the corporeal presence of the goddess. Above all, the text, replete with literary ornaments, constitutes the aesthetic body of the goddess. By transforming ordinary language to the aesthetic one, the text thus mirrors Sundarī or the ‘Beautuful One,’ and in this sense, the text becomes the metaphoric body of the goddess. Furthermore, the text is not merely descriptive. It is performed, as singing in melody is inseparable from the process of comprehension. The text frequently acts as a hypertext, assuming divergent readings through adoption of mystical and literary perspectives. Above all, each of the verses is used as a mantra that cannot be reduced to its literal translation. In essence, the divine body depicted in the text is identical with the text itself.

The process of integrating multiple metaphors establishes the divine body of unparalleled beauty. In this creative poetic vision, literary tropes constitute the divine body: the face of the goddess is a lotus, with the goddess’s neck being compared to its stalk; her ornaments are compared to the tangle of lotus roots. This depiction of beauty is inseparably linked to the text itself, as the poet’s choice of words not only allows him to weave the metaphors but also to inscribe the mantras. This piece represents the most perfect expression of language: it represents the absolute even when it says it cannot describe it. It is vividly demonstrated in the text by the application of suggestion (dhvani) in every mode of expression that language is not merely a device of literal representation. This depiction of language evokes an early representation, where word and meaning are compared to Śakti and Śiva.59 In the case of LS, Śakti is both the source and the target: Śakti as speech is the source and Śakti in her esoteric form is the target. In this light, a new framework is needed to ground speech that defies conventional understanding.

SL integrates mystical experience with the aesthetic one, as the same passage functions for both. While the mantric body of the goddess is linked to transforming commonsense experience to mystical one, the text itself that incorporates literary tropes and suggestions as a means to the desired end of aesthetic pleasure. The text is written for the connoisseur of both Tantra and aesthetics, and reading it just to serve a literary or Tantric purpose discredits its merits. On the surface, the poet praises the goddess through describing the divine limbs and ornaments. This process, however, is not distinct from of the metaphoric expression and the application of alaṅkāra or dhvani. When revealing multiple layers of meaning through primary or secondary indications or through suggestion, what is discovered is not just what is referred to, but also the innate experiencing mode of awareness. Since this realization underlies all the cognitive modes, there is no instance of cognition that is not endowed with self-awareness, the target meaning of the poem. This understanding cannot be reached without accepting the world-affirming Śākta philosophy that grounds the embodied nature of mystical experience. Following this philosophy, all modes of bliss – not just the aesthetic bliss – are the manifestations of the very self described in terms of ‘awareness and bliss’ (cidānanda).

The poet’s application of alaṅkāra in describing the divine beauty while essentially composing poetry of suggestion (dhvani-kāvya) follows the classical comparison of alaṅkāra as the body and dhvani as the essential self of poetry.60 The text demonstrates the prominent among innumerable alaṅkāras,61 and both the tropes that rest on the form of language and those that reveal content are displayed again and again in the text. The poet skillfully crafts both in a single verse (for instance, verse 1), and to fit the requirement of a poetry relying on suggestion (dhvani-kāvya), the literary devices are manifest as the second nature of the poet, without any intellectual gymnastics.62 This effort matches the poet’s quest of materializing the beauty of the goddess without any effort (sahaja, verse 43) with the self-realization described in Tantric literature as ‘born together’ (sahaja).63

The poet utilizes the poetic device of ‘ornamentation’ (alaṅkāra) with the awareness that the classical aesthetes viewed poetry or drama specifically as the body and literary tropes its ornaments. Although not all aesthetes take this literally, Ānandavardhana does, comparing the poetic alaṅkāra with bracelets (DĀ 2.6), recommending that it should be subordinated in order for rasa to be expressed (DĀ 2.19). The same alaṅkāras, however, attain the status of the self, if they are not simply resting in the signifying words, but are expressed through suggestion (dhvani). As Ānandavardhana (DĀ 2.28) states:

“Those figures of speech which cannot be made into the body of a poem when they are directly expressed, attain the highest beauty when they form a part of dhvani.”64

The centrality of the body metaphor in describing alaṅkāras is crucial for the discussion of the divine body.65 It is not coincidental in SL that the poetic alaṅkāras abound when describing the divine ornaments. For instance, verse 42 describes the golden diadem with an application of the device of doubt (sandeha) and exaggeration (atiśayokti); verse 61 portrays the nose pearl through an application of rūpaka and upamā; the garland of pearls is depicted in verse 68 with an application of nidarśana, rūpaka, and the inter-mingling of both into a single ornamentation (saṅkara). Verse 74 again describes the garland of pearls with application of utprekṣā and upamā. Verse 91 portrays the anklets embedded with shining gems applying utprekṣā, atiśayokti, and the inter-mingling of both (saṅkara). The relation of two corporeal and poetic ornamentations are, however, marginal to the description of the body of the goddess where dhvani plays central role in elevating the status of ornaments to the very essential body of the goddess.

Dhvani is at the center of the description of the divine body. The poet relies on alaṅkāra and rasa to reach to the suggested meaning (dhvani), and the text is saturated with examples of this application. Varied examples of dhvani can be gleaned from just the examples discussed above. In verse 23, the identification with Śiva through the identity with the goddess is reached through dhvani, and the poet utilizes multiple alaṅkāras in this process. The description of the eyebrows in verse 47 suggests the power of the goddess to destroy obstacles, a fine example of the application of dhvani. Lakṣmīdhara considers verse 48 as a perfect example of poetry with two different types of dhvani playing a role in the description of the eyes of the goddess that suggests transcendence of time. The aurora of the third eye of the goddess described in verse 50 is an example of alaṅkāra-based dhvani, as it applies multiple alaṅkāras in the process of animating the third eye. In extolling the glory of the goddess, verse 55 is an example of vastu-dhvani, and demonstrates a subordinate utprekṣā in this case. It is thus vivid that through suggestion, the literary device of ornamentation (alaṅkāra) transforms into the essence of literature, and for our argument, it makes the linguistic body irreducible.

SL is thus poetry for aesthetic experience and an Āgama for esoteric Tantric practice. With its focus on Tantric yoga in the first part identified as ĀL, 41 verses of the text elevate the experience of bliss from a limited bliss of self-awareness to the bliss that encompasses all that exists (jagadānanda).66 This process coincides with spelling out the mantras, as confirmed by many classical commentaries. The esoteric domains involve the discourse on cakras and Kuṇḍalinī, integral to Tantric yoga. This meditative practice supports the inward flow of the mind.

The text, following this argument, does not just describe the goddess but instead embodies her. Rituals directed towards the goddess, along the same lines, do not invoke the deity but confirm her corporeal presence. In the case of SL, the language of the text and its conscious flow of metaphors and metric articulation, are integral aspects of Trika, wherein the absolute is realized through both transcendent and immanent experience. What transforms the common words to the divine body is its aesthetic representation. The goddess is the beautiful one (Sundarī), and what embodies beauty (the words) stand for the divine body. Literary tropes of alaṅkāra and suggestion (dhvani) thus mirror the very body and the self of the goddess. This platform grounds both the aesthetic and esoteric experiences.

Ballantyne, J. R. and Pramada Dasa Mitra 1994. The Sāhityadarpaṇa or Mirror of Composition of Viśvanātha: A Treatise on Poetical Criticism. Delhi 1994.

Brown, Norman 1958. The Saundaryalaharī, or The Flood of Beauty. Cambridge 1958.

Dyczkowski, Mark 1987. The Canon of the Śaivāgama and the Kubjikā Tantras of the Western Kaula Tradition. Albany 1987.

Gerow, Edwin 1971. A Glossary of Indian Figures of Speech. The Hague: Mouton.

Hacker, Paul 1962. The Saundaryalaharī or Flood of Beauty. Orientalische Literaturzeitung, 57:1, 78.

The paper was first published in Zeitschrift für Indologie und Südasienstudien 32 (2015) and has been republished with author’s permission.