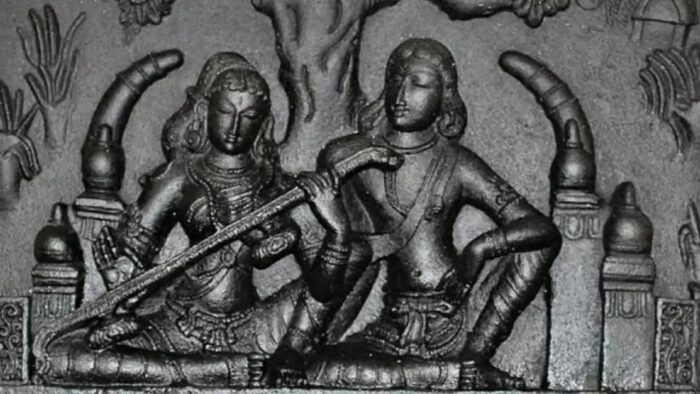 In the tradition of the ancient Tamizh people, the land was divided into five Thinais or landscapes, based on their terrain:

The Sangam poets had observed an intimate connection that landscapes had with the people and their lives, emotions and beliefs. Hence, certain conventional characteristic features were given to each of these landscapes – time of day, season, crop/plant, flower, animal, water body, soil, inhabitants, their occupations, and presiding deity. One guardian deity was identified for each landscape.

This classification forms the basis for the themes of the Sangam poems, composed in classical Tamizh. However, the use of Thinais in Tamizh literature was not restricted to Sangam poetry but was present in the common people’s songs as well. These songs, passed down from generation to generation through the oral tradition, are today brought under the umbrella term of “folk” songs. The common people sang these songs while they went about their daily work to reduce the wearying effects of their jobs.

While the Thinai conventions are fixed in Sangam literature, it is interesting to note the fluidity of the same in these folk songs. Many of these songs are specific to each of the Thinais but only in terms of the terrain and the occupation followed there. The deities for each of the Thinais find themselves travelling unrestricted out of their own landscapes and into others. Other deities also find a place in these songs. These divisions of deities for each landscape were perhaps based on the most popular deity worshipped in that region.

The songs are often interspersed with a relevant refrain along with a series of syllables of no specific meaning used to maintain the rhythm. By singing these songs while at work, the prayers of these people are combined with their chores. They are replete with not only poetic value but also Hindu religious and philosophical concepts in deceptively simple language and simple tunes. They are a reflection of Sanatana Dharma at the grassroot level. This paper attempts to bring out the Hindu religious aesthetics inherent in the traditional folk songs of Tamil Nadu and to try and relate them to the conventional landscapes.

The folk songs for this paper have been sourced from the pioneering M.Litt. thesis of late Shyamala Balakrishnan titled “Folk Music and Dance of Tamil Nad” (submitted in 1960 to the University of Madras). Though she collected these songs more than sixty years ago, it is not easy to trace the origins of these songs, which could go back to even centuries. The terrain or social milieu of today or of the year 1960 may be vastly different from the settings of the songs.

“Placing one hill over the other and creating a pavilion,

He appeared as an idol, the Lord Suruḷiyāṇḍi, the embodiment of prosperity.”

Suruli Hills lie in the Theni district of Tamil Nadu and they are home to the Suruli Andavar Murugan temple. The above lines poetically describe the small cave temple of Suruli Andavar nestled in the crevice of Suruli Hill. Historically, Suruli Hill is known as “NeḍuvēlKuṇḍram”, which finds mention even in the Silappathikaram, the great Tamil epic written by Ilango Adigal.

“I tilled the grass and transplanted the plantain,

where do all the plantains go?

They go for the worship of Pūmbāranādan,

what has Pūmbāranādan have in store [for me]?”

This is a song of the Pulayar tribe. Pumbaranadan is a form of Murugan worshipped in the village of Poombarai, at the foothills of the famous Pazhani hill. The temple still exists today and is in active worship. Poombarai lies on a plateau-like region surrounded by forested hills – an interesting confluence of the Kurinji and Mullai terrains. The above song refers to the sowing of the “pulavazha” plantation on the hillside and its produce being offered to Murugan, the presiding deity of Kurinji region, in the temple of Poombarai.

Shyamala Balakrishnan records a unique incident in her work. She had been a part of one of the night-time fireside gatherings of the Pulayars where their goddess had descended on a woman. A particular song was being sung at that time which Shyamala Balakrishnan started taking down and notating. The possessed woman suddenly stopped her and told her that unless she was to live with the tribe and worship her as one among them, she must not write down the song. Respecting the deity and the tradition of the village, Shyamala Balakrishnan stopped writing.

How will I cross this river and come?

How will I live in this hut of eight spans?

This is a harvest song, sung in the Marudham region where the main occupation of people is agriculture. However, the deity addressed here is Murugan or Karttikeya, the presiding deity of the Kurinji region. In this song, he is addressed as Subbaiya, a Tamizh variant of the Sanskrit name Subrahmanya. This song is of a highly philosophical nature. The vast river symbolises the bhava-sāgara or the ocean of birth and death. The eight-span “hut” is the body which houses the ātmā, and which measures eight spans by one’s own hand. This song is a cry to Lord Murugan to come and save the people from the vicious cycle of birth and death and grant them liberation. The intermediate shouts of “Vēl! Vēl!” and “Arōharā!” are immediately associated with Murugan in the South Indian tradition.

“A net suitable for fishing!

Wood suitable for a boat!

A vast net for fishing!

“Who all will I blame?

Can I blame the sea?

O Goddess, please cast an eye on this struggling soul!

Oh Consort, take pity on us!”

These are songs of the fisherfolk, sung in praise of Goddess Meenakshi, the one with beautiful fish-like eyes. In the first song, the fishermen have gone out to sea and have cast their nets. They sing of Meenakshi as their patron goddess who guards over their nets and their catch. In the second song, it is evident that they have not had a single catch. They call out to the sea as their “Pattini” or consort, asking her to yield some fish for their livelihood. It is common for water bodies to be referred as “Mother” in the Hindu tradition. The fisherfolk’s song is a unique instance where she is perceived as a consort or wife of the community. This song is sung by the men. The phrases “ḍiṅgiri diṅgālē” and “ēlēlō” are rhythmic in nature and sung as a refrain between lines.

Behold how She comes dancing and singing with joy!

Kottravai, a form of Durga or Kali, is the presiding of the Palai region. Though Tamil Nadu does not have a desert per se, the worship of Kottravai has been prevalent since times immemorial across landscapes. The above verses are from a song called “AmmanKoṇḍāḍi”, literally meaning “A Song of Celebration of the Goddess”. There are two notable references here with relation to the Goddess. One is the mention of “kumbam” and “kuḍam”, both meaning pot. In this context, they refer to the tradition of Karagam or Karagāṭṭam, a ritual where devotees balance on their head a consecrated pot filled with turmeric water and decorated with neem leaves and a coconut, and they dance to worship and please the Goddess. The second reference is the mention of Goddess Mahākāḷi of “Ujjini” or Ujjain, Madhya Pradesh. This shows the awareness of the people of the villages of Tamil Nadu and proves that faith has no geographical boundaries.

Normally, the word “folk” evokes an idyllic picture of rusticism and laukika. However, this rusticism is laden with subtle philosophical values. These folk songs prove that Hindu philosophy is not something that is restricted to the scholars and academicians, as is often misunderstood today, but it is embedded in the lives of all, finding practical expression even at the grassroot level. The simple language and tunes bring out the aesthetic quality of rural life. The respective Thinais were not just living spaces for the people inhabiting them but were considered sacred all-encompassing deities worthy of worship and celebration. This oneness with Nature finds expression through their songs. Moreover, these songs ooze with unadulterated bhakti (devotion) and sraddha (faith) to their respective devatas. Prayer was a part and parcel of the simplest daily chores, thus giving practical sanction to the saying “Work is worship”.

[1]The Tolkappiyam, which records this five-fold division of land, uses only the word Naduvunilai to describe the drought-striken areas of kurinji and mullai regions. The word Palai came into use at a later timeand is most commonly used today to denote the desert/arid region.

[6]Ibid., song 47, pg. 39. Only the first two lines of the song have been given in the thesis. The other two lines have been included in the LP record of the same title as the thesis by Shyamala Balakrishnan, Dr. Padma Subrahmanyam and group.

[7]Ibid., song 60, pg. 47. Like the previous song, in this song too, the first two lines are present in the LP record and absent in the thesis.