Unknown Tales from the Puranas: Dasharatha’s Brahmahatya and The Purification Power of Godavari 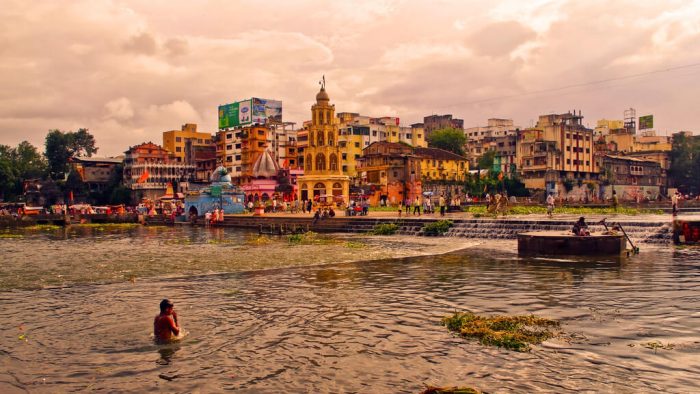 (This is the third article of the series titled ‘Unknown Tales from the Puranas’. There are myriad stories from puranas and upapuranas that are hardly known to most of us. The series will cover such lesser known tales, as well as unknown versions of the popular tales from pauranika sources. Read the earlier story here. The present story narrates what happened to King Dasharatha due to the sin of brahmahatya, and how he was freed from the same.)

Puranas note many cases of brahmahatya and its effects. However, it is rather unusual to locate the results of or punishment for brahmahatya in puranas, as they usually focus of means of expiation for the same. Kapalika-vrata as undertaken by Bhairava, giving up their life for the protection of a Brahmana or a cow, visiting a certain sacred place, bathing in a sacred pond, chanting of a certain Mantra, wearing rudrakshas of a given number of sides or mukhas, listening to the recital of select passages from puranas, establishing a temple/ idol/linga, undertaking a vow, observing fast at a sacred place, worshipping a deity, performing a sacrifice, offering donations, etc. are some of the ways noted by puranas to expiate a brahmahatya.

There are very few instances where effects of brahmahatya are noted. Agnipurana suggests beheading as a punishment for brahmahatya. However, this does not seem to be a common practice. Vayupurana states that the sinner shall go to a hell called Sukara. Vishnudharmottarapurana opines that killing a Brahmana is the most horrific sin one can ever commit. The killer of a Brahmana would rot for innumerable years in hell; so also will a Brahmana committing suicide.

In opinion of Padmapurana one who hurts a Brahmana physically, mentally, or even verbally shall receive punishments like being sent to horrible hells, being born crippled, being born in lowly classes like insects, being born with leprosy or paralysis, etc. Yet, we hardly see an actual case of such results. A rare case is found in Brahmapurana with reference to King Dasharatha.

The background story of Dasharatha’s brahmahatya is very famous. King Dasharatha had mistakenly killed a Brahmana boy Shravana, and due to the shock of losing their only son, his parents also died. Many texts note that due to their curse, Dasharatha died being separated from all his sons. But what remains unsaid in the story is implications of not one, not two, but three brahmahatyas committed by Dasharatha. The story is elaborated upon in Chapter 53 of Gautami Mahatmya under Brahmapurana.

As King Dasharatha caused one direct and two indirect brahmahatyas, he undertook the Ashvamedha sacrifice in consultation with his Gurus and Purohitas to expiate the sin. A divine speech declared that he would be freed from the sin due to his eldest son, Rama. In spite of having done the Horse Sacrifice, due to the horrendous nature of his sin, he was subjected to torment in multiple hells upon his death; where he was boiled, crushed, squeezed, and roasted.

When Dasharatha approached them, they could not recognize him due to the effects of his sin. Lakshmana in fact tried to threaten and shoo him away, mistaking him for a demon. Upon his introduction, and realizing the triple brahmahatya as the reason of his despair, Seeta offered to share the three sins between her, Rama, and Lakshmana; so that Dasharatha could be freed from the miseries of hells.

Dasharatha assured her that a simple solution of ritual bathing in Gautami Ganga, i.e., Godavari and offering of pindas would suffice. After the trio does accordingly, Dasharatha is freed from his sins. All the divinities appeared there to inform Rama that his father had indeed attained heaven. Rama, Lakshamana, Seeta, and other Gods expressed their awe at the cleansing capacity of River Godavari.

Rama went on to establish a shivalinga at the site. The place where Rama bathed came to be known as Rama Tirtha. Similarly, Lakshmana Tirtha and Seeta Tirtha also came into being. One who offers pindas to his ancestors here, allows them to go to heavens.

It is fascinating to see how the story of brahmahatyas by Dasharatha and the Rama’s visit to areas around Godavari, are clubbed with the establishment of a sacred site with definite activities and definite fruits associated with it. It is amazing to analyse the various instruments and motifs utilized by puranas to incorporate newer places into the pantheon. A very clever analogy is employed with the trio Rama, Lakshmana, and Seeta against the triple sin.

Purificatory power of Godavari to free one from even the major sins is highlighted here. Association of Bhagirathi Ganga with freedom from the sin of brahmahatya is well-established through the tale of Bhairava. Here, a similar connection is established with Gautami Ganga as well. This duplication of sites is a typical feature in the field of sacred geography.

Significance assigned to Brahmana in the society is highlighted with the plight of Dasharatha. There are many cases in puranas like that of Rama and Indra, where they are freed from the same sin with a Horse Sacrifice. In spite of having performed Ashvamedha, Dasharatha is subjected to torment in hells. However, an escape is planned with the use of divine speech stating Rama as the solution provider. This throws light on a gradual and definite shift from sacrifice to activities associated with sacred geography as the principal ritual practice.

In all, the tale is a very good example of incredible narrative building skills of puranakaras, establishing a new connect between otherwise unrelated episodes, and employing various means and motifs to smoothen the transition from sacrifice-centric Vedic religion to modern Hinduism.