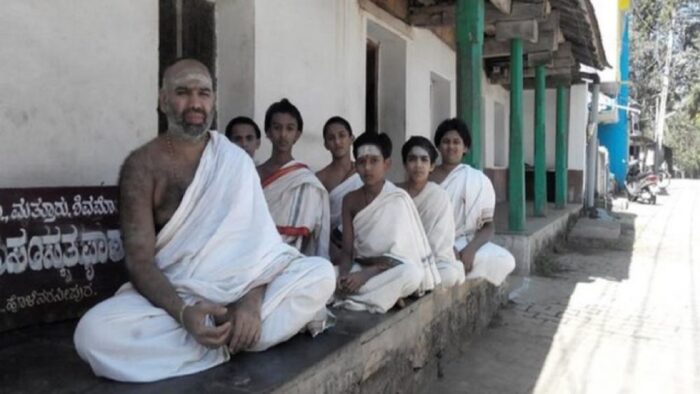 Mattūru (aka Mattur) is a unique village near Shivamogga, Karnataka on the banks of Tungā. It is notable mainly for being a rare place where one may find a pristine agrahāra still brimming with Sanskrit, Vedic and Vedantic study and practice. It is extremely hard to find such a concentrated milieu involving devout shrauta and smarta ritualists and scholars of many of the traditional branches of Vedic knowledge (advaita vedānta, jyotiṣa, shikṣā, kāvya, kalpa) who encompass all the extant āshrama-s (brahmacharya, gṛhastha and sannyāsa). When was the last time you saw the sacred shrauta fires for which the veda-s were compiled in the form we see today? Can you think of another place on earth where you would find three practicing agnihotrin-s and many more former agnihotrin-s and somayAjin-s? And even sannyāsin-s? If you wanted to do a Vedic iṣṭi, would you easily find skilled Rtvik-s to fill the roles of hotṛ, adhvaryu, agnīdhra and udgātṛ in your surroundings? Do scores of devout brāhmaṇa-s in your surroundings stay awake in the middle of the night during a lunar eclipse to take a bath in a very cold pristine river and do their japa-s? Impeccable command over the lore Do learned vaidika-s from other regions invite your neighbors for conferences where tough shāstra questions are considered? Do learned practicing brāhmaṇa-s in your neighborhood teach veda-s, shāstra-s and kāvya-s in Sanskrit? Are they able to explain and present tough concepts clearly and concisely to the amazement of savvy skeptical outsiders from the city? Have they compiled and published original books?

Happiness and the arts Do you see kids happily play on the street even as they bear shikha-s and wearing dhoti-s? As you walk around your neighborhood, as you make your way around loitering desi cows, can you listen to the chriping of birds, the chanting of the veda-s, the Carnatic classical music, practice of the gamaka art form {YT} and high pitched challenge of the shrauta ritualist?

Mattūru preserves a vigorous kernel of the pristine life of vaidika brāhmaṇa-s. Stepping into Mattūru, is like stepping into a past age – and a potential part of our future! It is not too improbable that we will find refuge in the virile lifestyle and ideals of our distant ancestors such as Rāma, Kṛṣṇa and father Manu – even as we meet the challenges of today. Whether it is Shrauta and smarta ritual, mastery over the Vedic lore and philosophy or delight in the classical arts – as long as the current Mattūru ecosystem persists, these will persist. And so will a warm and welcoming people, who will happily explain the ways of the sages to curious visitors and students without compromising the essence.

As we can see in the intro, Mattūru is unique in this regard. It is extremely hard to create another Mattūru elsewhere (though we should try). In fact, but for this tiny spot of earth, we would scarcely believe that such an ecosystem can exist in this day and age.

As an example, villagers from Mattūru and neighboring Hosahaḷḷi played a major role in (trans)forming Mohit Bharadwaj, founder of Vaidika Bhārata, who has gone on to play a major role in reviving the near-extinct Śānkhāyana branch of the Ṛgveda and shrauta ritual tradition in the heartland of the ancient Bhārata-s in North India. Several outsiders have studied in Mattūru for extended periods of time; some have even come to settle there with their families (such as Pradīpa, a devout Āśvalāyana agnihotrin and Rājārām Mūrti, a former businessman)!

The Mattūru agrahāra is not cut off from the rest of the world – they interact and contribute to the well-being of others, and are in turn buffeted by outside lures and pressures. Some youngsters from the village choose to leave to become engineers and doctors; some stay contentedly stay back to become the future embodiments of Vedic ideals. Though the agrahāra is self-sustaining, thanks to ancient land grants to the resident brāhmaṇa families, it does benefit from outside contributions for some of its scholarly and educational activities.

We should ensure that this outside influence continues to be as positive as possible. Out of gratefulness and frank self interest in letting our children have access to a place like Mattūru, we should contribute to its sustenance and security. श्रुति-शङ्कर-संस्कृत-संशोधन-प्रतिष्ठानम् is the agrahāra’s veda school and research center. While much Vedic education happens at homes, students from outside (including young boys from Andhra Pradesh, North Karnataka etc., as of 2018) come to this school to study the veda-s, shāstra-s and imbibe the inimitable opportunities for acquiring and practicing the Vedic lifestyle that Mattūru provides. The talent of the village is capable serious research and editing work, as demonstrated by their production of meticulously researched and highly lauded books on Āpastamba śrauta rituals. This involved decipherment of multiple manuscripts acquired from distant places, learning unknown scripts, projecting hard to read manuscript images and consulting distant scholars for clarity. Circumstances permitting, their ambitions extend to several other similar works.

The smooth running of a gurukula is a tough task, requiring a resident master. Kids being kids will otherwise tend to run amok. The village masters, led by shrI Venkateśa Avadhāni, contribute what time they have left over from attending to basic survival needs and household tasks. Unfortunately, this has not been enough, and the institution does not have enough funds to attract, hire and sustain a resident master (requiring around 30000 per month as of 2018).

With whatever funds they have, the local management is currently (as of 2018 August) renovating the institute building.

Research is a time consuming affair (as described earlier), which necessarily require the scholar to neglect his mundane work (such as tending to his family farm) and worries. Producing works of quality similar to the Āpastamba śrauta texts would require 15 to 20 lakhs as of 2018. Though various people (including heads of monastic institutions) have made promises (even in public!), nothing has materialized.