The Dance Of Dharma 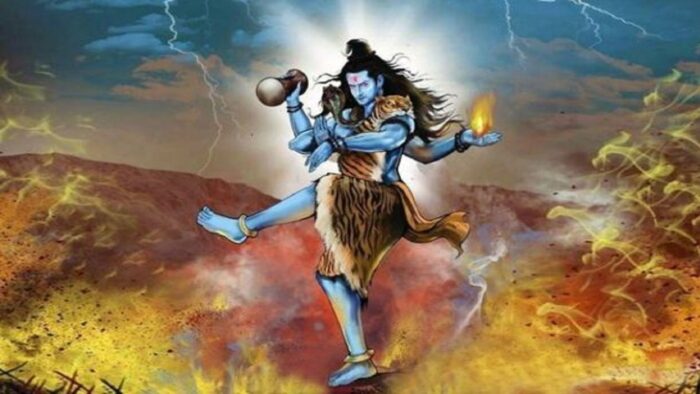 On a snow-clad peak far above the mundane world of mortals, Nandi sat motionless. His white coat glistened like silver against the spectral Moon and the golden horns from afar looked like two fierce eyes guarding the night.

“They say I have waited for centuries,” said Nandi to the eternal presence before him.

At a distance, the darkness gave way to a formless form of shimmering light as Śiva emerged, a faint outline in which the Moon got enmeshed in His dark locks from which a divine river of stars seemed to emerge. The horizon turned blue, the blue of poison that once in a previous eternity he had consumed.

“You have always waited for me, my Nandi,” said Śiva, His voice reverberating across the icy mountains.

“I could always see you,” said Nandi, implying that, well, nothing could come between them.

“They have short lives, Nandi,” said Śiva with what appeared a smile in his formless form,” and even centuries cannot punctuate an eternity.”

“Should we not work on their timescales, then?”

As if giving an answer, Śiva flicked his ḍamarū, the sound of which carried across the vast expanse of Time, perhaps setting in motion events that only He knew would transpire.

“What untold pain and misery, O Lord,” said Nandi with a concerned voice. “If only stones could speak!”

“You know very well, Nandi,” said Śiva, “that stones have life, that prāṇa flows through them too. They can breathe, they can speak, they can sing, and therefore, they can also cease to be and become silent as the night.”

“The hammers of hordes have erased the life from them, O Lord!”

“The hammers of indolence are no less, Nandi,” said Śiva, and then after a pause, added, “and yet, the devotion remains as steadfast.”

“Who can interpret the speech of stones, O Lord?”

“How can you understand a child without becoming a child?” asked Śiva cryptically.

At that moment, the divine sage, Nārada, appeared there. Wearing his usual ochre robes, with a kartāl in one hand and his vīṇā in the other, he bowed his head at Śiva and then at Nandi.

After singing the praises of Śiva, Nārada asked him with a subdued amusement, for he knew better than to jest with the Three-Eyed Lord, “Who needs to become a child, O Lord?”

“What brings you to my abode, O Nārada?” asked Śiva, as if deflecting the conversation.

“So much happening on the Earth, O Lord!” said Nārada. “Is it not time for you?”

“I decide the Time,” said Śiva and flicked his ḍamarū, the sound of which carried across the vast expanse of Time.

“Should you not intervene?” insisted Nārada.

“Should I or Nārāyaṇa?” asked Śiva in jest. “Nārāyaṇa is the one who takes avatāras, Nārada!”

“Nārāyaṇa! Nārāyaṇa!” laughed Nārada. “You should come down from the mountains, O Lord!”

“Where these mountains are,” said Śiva, “there once was an ocean. Ask Nārāyaṇa, O Nārada!”

Nārada thought for a few moments, for among the divine sages, he was the most prone to think like the mortals.

“What is the way out, O Lord?” he asked with concern.

“For your bhakts, of course.”

“My bhakts should find the way, O Nārada,” smiled Śiva.

Nārada felt the darkness throb and pulsate as if Śiva was playing his ḍamarū while dancing his cosmic dance, but he could see nothing.

Awestruck, he stared and looked around him until he saw a flicker, the triśūl becoming larger and larger, and engulfed in angry red flames that threatened to burn the very mountains with its rage…

“O Śiva!” he pleaded and prayed.

Behind the triśūl he saw the outline of Nandi, large and menacing, the red eyes of the divine bull flicking like wrathful embers in the night sky.

“My bhakts should find the way, O Nārada,” repeated the God of Time, now only a Voice in his mind.

When Nārada woke up he found himself in the mortal world.