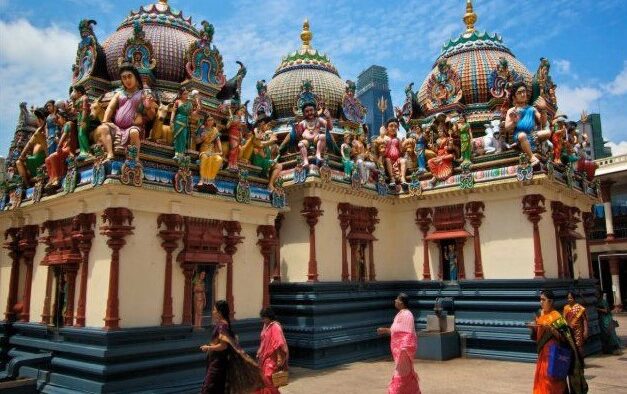 Pradakshina and Kshetram – The Sacred Sense of Space

The most potent means of imparting meaning to rituals and symbols is pradakshina or the ritual of circumambulation. The Agamas which dictate how a temple should be built, how worship should be offered in the temple, how a priest shall behave and conduct affairs, also speak upon the conduct of the devotee. There are very clear instructions on how to visit a temple and what to do upon visiting a temple. Every Agama Shastra has elaborate chapters on the behavior or ‘charya’ of the devotee. And our rishis would not be writing entire padas in the Agamas if they were not meant to be widespread or not to be known by the devotees.

The charya that dictated the conduct upon visiting a temple included rituals which made sure that the devotee beheld every part of the temple completely, along with intuitively grasping its full meaning. And the most potent means of making sure that the devotees grasped the full meaning of the divine architects was the tradition of doing pradakshina.

Doing many pradakshinas around the temple, the devotee would pass through every important part of the kshetram and stop at regular intervals, performing necessary rituals and soaking in the importance of every constituent that comprised a kshetram. If there is one single ritual that is associated with almost all Hindu temples apart from having darshana itself, it is the tradition of pradakshina.

No matter the location, sampradaya or affiliation of a temple, pradakshina is an inherent feature of temple going. Some temples are built with a pradakshina patha included inside the temple called sandhara, but that does not mean that other temples do not necessitate pradakshina. In nirandhara temples, the pradakshina is done on open ground. There is hardly any temple which does not have the tradition or provision of pradakshina.

The devotee while going around the temple chants mantras specific to pradakshina. These mantras immerse his body and mind more completely into the ethos of the temple. They cleanse him of all other thoughts but those pertaining to the kshetram and the deity. One popular mantra is:

“O Lord! Whatever sins I have committed all my lives (including previous lives), please destroy them at every step I take around you.”

When a devotee goes around the temple chanting this, he takes the samkalpa that he is cleansing himself of all sin, of all bad deeds that he knowingly and unknowingly committed in all his lives. Karma is not destroyed with this samkalpa, but the heart is prepared to visit the kshetram in its true spirit.

The word differs in different regions of the country. In most temples of the south, where Sanskrit is still the primary language of rituals, pradakshina is the most common word. In the north, almost no one knows the word pradakshina. The word they are most familiar with is parikrama. However, in most rural areas even this is different and the region in and around Gwalior where I come from, ‘parikamma’, the local word is most popular. However, the tradition is universal. Temple going is meaningless without pradakshina or parikrama.

Every Hindu temple is built in the imitation of the cosmos, the entire universe or the entire world. The scale does not matter, but the architectural idiom of the temple makes sure that the entire cosmos is reflected in the temple. And the most important purpose of pradakshina is to understand the macrocosmos through gazing upon or going around its reflection in the microcosmos, that is the temple.

This purpose of pradakshina is made clear through various Pauranic stories, the most famous being the story of the competition between Kartikeya and Ganesha. The two brothers get into a competition of who goes around the entire universe faster. Kartikeya, being the smarter, more agile and more supple one, immediately abounds on the pradakshina of the universe on his quick vahana, the peacock. He thinks that Ganesha has no hope of doing it faster than him, being plumper and slower than him and also having a mushaka as a vahana. But Ganesha thinks of a clever solution. He does 108 pradakshinas of Shiva and Parvati, his mother and father who represent the entire universe to him.

Apart from stressing the importance of pitras and the immediate family that this story tells, it stresses a very important point. It tells us that the objective way of knowing the universe by discovering and analyzing its every single part is not the only way to know about it. The story tells us that the macrocosmos with its unimaginable vastness is actually reflected in every constituent of its own, completely. And analyzing and knowing one of its part completely is akin to knowing the universe in its entirety. It is also an endorsement of the subjective way of knowing, stressing the impossibility of doing so objectively.

This sentiment did not emerge late in the ‘Puranic era’, whatever that means. It has been present ever since Sanatana culture took shape. The Vedas give the metaphor of Indra’s net, in which the entire cosmos is reflected in every single constituent of the cosmos. There is a universal interdependence of the constituents and a co-arising of all its constituent parts. Knowing one deeply makes sure you know it all.

Coming back to the temple, the temple as we discussed represents the entire cosmos no matter how small it is. Thus doing a pradakshina of the temple was an act of knowing the universe, the cosmos, the creation, in its entirety. Going around a temple, doing the sacred rounds was not just a simple ritual. It was an act of knowing, similar to the act of darshana of the Divine Consciousness in the garbha-griha.

In the Tamil Nadu temples there are as many pradakshinapathas as there are concentric squares. Though it is not enforced and a modern devotee can enter one gopuram and go straight through the other inner gopurams to arrive at the inner sanctum directly, but generally the devotees don’t do this. They go around the many prakaras and many pradakshinapathas encircling the garbha-griha and the sacred center many times, gradually honing in at the garbha-griha and finally arriving at the darshana of the dhruva bera or the primary vigraha.

Many devotees first have the darshana of the primary deity and then go around the pradakshinapathas. In either case, there are various smaller teerthas, within the great temple itself which the devotee visits. All of these teerthas are spun together in the temple legend, creating an organic whole. They do not just represent the evolutionary history of the temple structure, but weave the different structures into an organic whole. The devotee without being conscious about the process gets acquainted with the legend of the temple.

There is another great role that the tradition of pradakshina performs. It is the act of pradakshina which decides the limits of a sacred kshetram. Pradakshina is the boundary, kshetram is the influence area, the garbha-griha of the main temple is the core. And this metaphor of pradakshina and kshetram is repeated on many levels, not just at the level of a temple.

The circumference and the area of the kshetra to do a pradakshina around keeps increasing. Thus, people go around the Govardhan mountain in Vrindavan, for the entire mountain is sacred. Similarly the Agni Kshetram of Thiruvannamalai has an 18 km pradakshina around it. Then there are pradakshinas of rivers. The Narmada parikrama is famous in which devotees go around the entire length of the river, visiting numerous teerthas on its banks.

Entire regions become sacred kshetrams by dotting the landscape with various temples that represent the larger kshetram. For example, Tamil Nadu is spun into a network of many sacred kshetrams. One of them is the circuit of the sacred Kartikeya temples. These temples are found across the length and breadth of the state. People go on pilgrimage of all of these temples in one go, thus going around the sacred Kartikeya kshetram and in one sense entire kshetram of Tamil Nadu. Similarly there are the Pancha Mahabhoota Sthalams, the five most sacred Shiva kshetrams in Tamil region. There are 108 Divya Desams, the most sacred of the Vishnu temples mentioned in various Puranas.

Similarly the pradakshina of Char Dhams across the country encompass the entire sacred landscape of Bharatvarsha. Similarly, the 51 Shakti Peethas also cover the entire landscape in yet another circuit. So do the Jyotirlingas and various other such pilgrimage circuits. The ritual is the same, that of pradakshina and the kshetram. The boundary and the body. The core and the periphery woven together in an organic whole.

Pradakshina is a way to make the meaning of the temple and the teertha more easily available to the devotee, to present the entire kshetram in its entirety to him, to make its significance and meaning more immediate to him, and to make the entire experience more holistic. The tradition of pradakshina created the sacred sense of space, sacralizing the very geography of India.

Hindus in general did understand the meaning and symbolism of their deities, their sculptures, their temples and their art forms. Various means were devised to make sure that they understood this symbolism. A shared vocabulary familiarized symbols across the boundaries of disciplines. Rituals like chanting mantras, doing pradakshina and practices like meditation made it possible for the common man to partake in the meaning that the Hindu art intended. Of course some may not have understood it, but in general, the meaning of the vigraha, the meaning of Hindu arts was not lost upon the common man.