Swami Vivekananda and the Re-emergence of Indian Thought 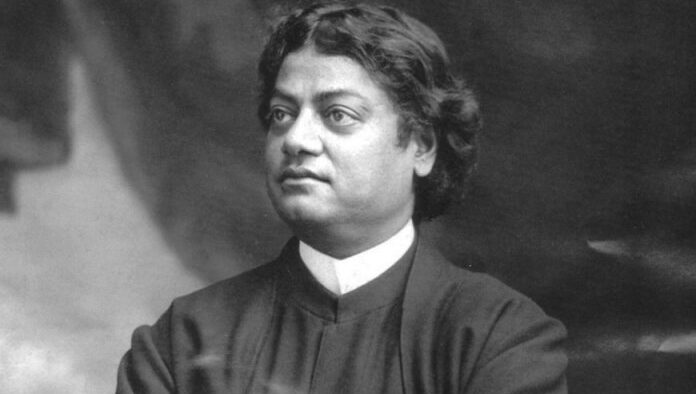 Scriptwriters of traditional Congress propaganda would have us believe that M.K. Gandhi was the “Universally revered Bapu” (Father of the Nation) and J.L. Nehru its lovable and benevolent “Chacha” (Uncle), never mind the sacrifice of millions, the wisdom and contribution of countless great souls who made us the nation we are today, unfettered by alien bonds but trammeled somewhat by a divisive polity, the latter thanks to a lop-sided, entitlement based constitution. Somewhere along the way between the great 19th century re-unification of Hindu consciousness achieved by Swami Vivekananda and the political reassertion of native culture via the 2014 elections, we have lost the way and transferred our reverence to a pallid mimic of the modern Indian nation’s true progenitor.

Among those original dreamers of a rejuvenated Bharat, were the triumvirate of Lal Bal Pal (Lala Lajpat Rai, Bal Gangadhar Tilak and Bipin Chandra Pal), who also ushered a 47 year old M.K. Gandhi into future national prominence. Later Congressmen of course diluted these triumvirs as lesser leaders in post-independence historical discourse and pushed Nehruvians to the forefront of the struggle for self-determination in school textbooks.

However, as we glance back at recorded assertions of the chief ideologue among the three, i.e. Bal Gangadhar Tilak, he clearly recognized who the original father of the nation was. He gave that honorific to Swami Vivekananda, the once in a millennia colossus credited with giving voice to what Bharat and Bharati stand for. This was done in recognition of Swamiji’s uniquely successful efforts in coalescing fractionated streams of Hindu consciousness into a Gestalt whole, which in turn birthed the nationalism which would carry Bharata-varsha to political freedom within 50 years of Swamiji’s passing and perpetually set the sun on the British Empire.

It has become rather popular, within predominantly Marxist historian discourse (there is precious little of another kind in India), especially in the last three decades, to dismiss Swamiji as a “religious” icon. Had the great man been alive, he would have smilingly repudiated the word ‘religion’ in the Greco-Roman sense when applied to the greater Hindu consciousness. His greatest achievement was, after Adi Shankaracharya’s original Sanatan revival, defining us as a people with commonly defined principles of Dharma and Karma, loosely translated in English as duty and action as applied to society. Therefore, we must view Swami Vivekanand’s legacy as a cultural one above all else.

To any who have read his words seriously, it would be clear that Swamiji’s vision was far from the deplorable communal cast the word “HINDU” has been pushed to. His definition was culturally and historically rooted. Swami Vivekananda was the last of the indubitably great seers and Karmayogis in a long line of illustrious predecessors from Adi Shankaracharya to Dayanand Saraswati who kept the flame of the native belief systems and philosophies alive. In this task, they were aided by Shrutis and Smritis preserved by select sections of Acharyas particularly in Southern India but surprisingly also in Islamic rule dominated Kanyakubj (the region around Kashi). Embedded in these stores of knowledge were the original seeds of a singularly unified and systematically organized civilizational ethos. Swamiji’s quest and apotheosis was based on those seeds of civilization and hence his definition was primarily cultural.

This belief system, given medieval challenges of poor communication and surface links accompanied by mostly intolerance and censorship of Islamic and to a lesser extent but equally effective, disdain from neo-Christian occupants from Europe, remained disparate. Over time they became diffused and slowly entrenched as distinctly flavoured religious dogma, deviating from the original unity of the civilizational ethos. Adi Shankaracharya’s work can be viewed as a great revival and re-flowering of the original Sanatana system (Sanatana itself was a syncretic term popularized by Adi Shankaracharya himself) and was based on using Tarka logic of Purva Paksha and Mimamsa to resolve the schism from Sanatana Dharma of Buddhism. In this context, and it is perhaps an entirely new article, it is worth mentioning that Adi Shankaracharya didn’t set out to “defeat” Buddhism as propagated by Marxist historians who perhaps wish to cast Buddhism as a subaltern revolt against “oppressive” Brahmanism, but to reintegrate it back within Sanatana fold, a task in which he succeeded resoundingly.

Swami Vivekananda’s achievement was defined by his focus on Vedanta, which was to be the great flow of all Sanatana tributaries into one river, almost like a generic operating platform into which all Hindu faiths or applications could be integrated. I.e., Swami Vivekananda left us a legacy which allowed us to be culturally unified and able to assimilate every possible faith system, even Abrahamic ones if required.

His early demise left a great work unfinished but did leave us the architecture for final assimilation and unification of what he called Hindu belief systems. He used the word “Hindu” in a counter proselytizing nod to western comfort with that descriptor, though not the underlying unifying purpose of that word. So what did Swamiji really mean when he later exhorted all “Hindus” to unite in a new national resolve to rebuild our once great culture and resume its spiritual and intellectual leadership of humanity? Since the Alexandrian invasion and perhaps earlier, the word Hindu has implied all people who dwell on or to the east of the river Sindhu. The word itself is a derivative of an Arabized pronunciation of Sindhu, i.e., Hindu. Later Europeans who travelled east for their periodic trysts, from Roman onwards, merely adopted the existing Arab word Hind, which logically they encountered before they did Bharat Varsha. So in adopting the traditional Judeo Christian or Arabic word for Bharat Varsha, Swamiji effectively sealed the territorial definition as well as cultural distinctiveness of people within that territory as “Hindu”. This politico-cultural definition was thus a crucial piece in creation of the new identity.

As its imaginative progenitor, Swami Vivekananda did not just capture the tacit acknowledgement of our “Indian-ness” by Judeo Christian leaders and consequently the culture definers of the west. He also captured the imagination of the emergent national leadership and gave them the inchoate but definitive cause to build the national consciousness on. Its chief early ideologue, Bal Gangadhar Tilak, in recognition of this genesis and progenitor rightfully called Swami Vivekananda as the true “Father of the Nation” at a time when M.K. Gandhi was still discovering his true roots in South Africa.

This article is written to remind us of this bit of history we are in danger of forgetting but must revive and spread widely. Sans our real past, we merely stray off in directions away from what should have been our natural path. It is this author’s sincere hope, that this essay at least evokes re-examination of our recently received wisdom which is indeed an experiment with the real truth.

(This article was first published by IndiaFacts here)

Shamik Moitra is an expatritate British Indian based in Mumbai and Founder CEO of Maitreyi Capital, an India-focused Venture Capital partnership. He comments on Economics,Read more