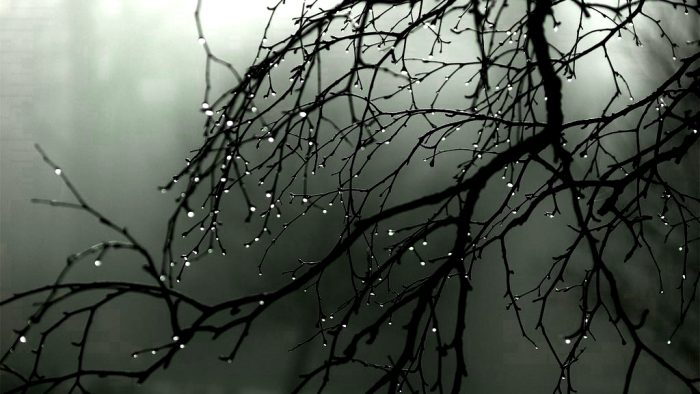 The lifeline of Bhārata, the southwest monsoon wind, was not surprisingly an object of attention of the Hindu poets, in the long Sanskrit kavya tradition over the ages.

One example presented by the anthologist Vidyākara, whose author remains unknown to me, goes thus:

While the smooth and delicate alliterative effects of this verse are not easily rendered from the Devabhāṣā, one may roughly render its meaning thus:

The southwest monsoon wind blowing from the waves of the ocean of the Muralā land (northern Kerala) which, it has tasted and abandoned, shakes up the trees of clove, Symplocos racemosa, star fruit and Millettia pinnata beans. The wind born in the southern sea slopes with banana groves blows at will, rustling and beating the palms on the banks of the Kāverī.

Several poets over a period of more than a thousand years are seen consistently resorting to evoking śṛṅgāra (eroticism) as the primary rasa as they describe the southwest monsoon winds. One example is a poem of unknown authorship recorded by Vidyākara:

Here the southwest monsoon wind is described as having the southern direction as a wife whom he has enjoyed for long. He then leaves her behind and very slowly steals away in fear from her with his body decked with the perfumes and essences of the south, and proceeds to the northern direction which is like his paramour (dayitā).

Yet other poets work the classification of women of the subcontinent typical of the kāmaśāstra into this expression of the śṛṅgāra-rasa. Two of the most famous of these are of the Bauddha poet Vasukalpa and the Shaiva poet, Śrīkaṇṭha-śiva.

It states that the fragrance-bearing winds blowing from the south roll and slow down after striking the surfaces of the firm and closely set breasts of the Andhra girls; then they play among the elegant, heavy flower-decked hairdo of the wives of the Tamil country; then they smell the fresheners in the lotus mouths of the girls of Śrī Lankā and finally kiss the cheeks of the girls of Kerala.

Here the southwest monsoon winds are described as stealing the jasmine pollen from the hairdo of the Kerala wives which have been loosened upon being pulled by their paramours; then the winds grow motionless upon colliding with the breasts of the women of the Tamil (Choḻa) country endowed with good hips; then they are said to bear the streams of water from the Revā peak and remove the seal of self-consciousness (or more plainly the unbuckling the garment that covers their honor) of the women of the Andhra and Muralā countries, shrieking like a young female cuckoo.

Such tropes working śṛṅgāra into the description of seasonal and weather patterns is a common theme in Hindu poetry and often offend the western-conditioned modern Indian mind.

While most of the above examples describe the more benign aspects of the arrival of the winds, especially just prior to the actual burst of the monsoon, there are some which talk of their more violent manifestations. We may consider one such example in full detail:

Thus we may render it as:

These clanging winds, with dark fibrous tangles of ruined nests,

helpless from the swaying of branches, causing trees to tremble,

play with covers of water tanks, contemptuously agitating them,

making them dance about, having loosened and struck them,

having shaken, uprooted, thrown up, and whirled them around.

Anyone who has witnessed the Indian monsoon it is unbridled vehemence can fully appreciate this verse.

As a digression, we may note that this verse gives a hint regarding an ancient feature of Indian life – the prapā or the public water-store from which people could drink water. Making public water-resources, i.e. kupādi dānam, was among highest of meritorious activities for a Hindu.

Śabharasvamin mentions a mantra from the Ṛgveda (RV10.4.1) as being the Vedic injunction for such constructions. The said mantra specifically alludes to the water-store known as the prapā which is set up in an arid zone to provide for wayfarers. One is said to burn half of one’s duṣkarman (bad karma) when one sets up water resources for public use. The recommended water resources are kūpa: wells, prapā: water-sheds, apā-cakras: water-wheels, vāpī: a water-tank with steps leading to the water (a construction of great antiquity going back to the old Harappan cities), hrada: deep tank, puṣkariṇī: a pond and a taḍāga: an artificial lake.