Sabarimala And The Blood Demons 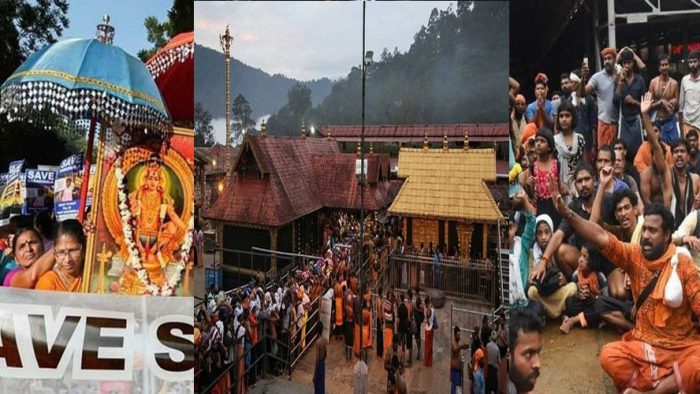 Twelfth day of Devipaksha. Moonlight was flooding the face of the earth. Goddess Durga & her children have returned to Kailash, just a few days back. Once crowded grounds have now fallen silent, quiet.

The boy was in deep dark slumber. Pages of the book lying beside him, were turning with the pace of the wind. Old memories crept in the boy’s dreams. Memories that go back a few ages, perhaps a few births before this. In the boy’s head reverberated the shriek of a barbaric desert traveler.

The priest of Somnath temple held his head down as Sultan Mahmud of Ghazni burst into a hysterical laughter.

The year 1025. The date was 25th October. Records indicate Patan of Gujrat to be the site.

The Gods have fallen. Resistance of Pagan Hindus have been demolished to the dust. 84,000 trained soldiers of Mahmud & 10,000 fanatic Ghazis have made this victory possible with relative ease. Bhimdeb, the king of Patan, Amar Singh, the king of Lodar have been defeated perennially.

Idolater Hindus foolishly believed the Lord deity of Somnath will lead them in war, defeat Mahmud, demolish his pride and punish Mahmud with his own bare hands. But all hope is lost now. Once all of Patan’s temples were burnt to ashes, Mahmud finally reached the gates of the mighty temple of Somnath. Facing him was an army of 20,000 Rajput warriors and countless Hindu devotees, ready to fight till their very last breath.

The priests of Somnath temple humbly stood in front of Sultan Mahmud. They requested him with folded hands, to spare the Gods and their abode. In return Mahmud can receive all of the temple’s Gold, jewels and ornaments. Millions of devotees and their faith is attached to this temple. For humanity’s sake, beliefs should not be attacked, faith should not be disturbed.

“You do not know what I’m about to do.” Mahmud responded with a wry smile.

“Destroy the temple of the non-believers. Break their idols into thousand little pieces. Let the heathens witness with their own eyes, that their idols are nothing but lifeless pieces of stone.”

The stage was set for a last battle. Rajput swords flung high in the air like a thunderbolt shining through a bright sunny day. It was a point of no return. This battle ground was going to be the place where they’re laid to rest for the rest of eternity.

Historian Alkaz Wini noted, the crying warriors would go inside the temple to pray to their Gods, and then come out to fight until their bodies fell to the ground, lifeless. It is a fatal attraction, like the moth to the flame. The battleground was painted red with blood of the fallen warriors.

50,000 dead bodies fell to the ground that day, as Mahmud Ghazni finally set foot inside the beautiful temple of Somnath.

The piece of stone that made the deity of Somnath was broken into thousand little pieces. Heaps of Gold, precious jewels and ornaments of the temple were taken away by Sultan Mahmud.

Soon after, the temple was set ablaze. As the fire engulfed the mighty temple of Somnath, the faith of millions of devotees went up in smoke. Destruction of Somnath was complete. It was proven beyond all reasonable doubt, the deity of Somnath was nothing but a lifeless piece of stone. Mahmud made sure of that.

The boy suddenly woke up from his dreams. His body, bathed in sweat. Memories from his past birth continue to haunt him. There is no escape, no respite from the troubled conscience of his own senses.

The same wry smile played across the face of Ikhtiyaruddin Mohammad Bin Bakhtiyar Khilji. The Buddhist monks stood in front of him, with their heads bowed down. Not in reverence or awe; but in humiliation of utter and absolute defeat.

“Tell me Kaffir, does this fort have our Holy Book”?  Bakhtiyar’s voice roared loud and clear. That cruel wry smile intensified between his lips. The answer to this, is already known to him.

“No”. The Buddhist monk responded in negation. Bakhtiyar’s sword came down at once, as the monk’s head tumbled down far from his body.

“Set it on fire, burn the abode of non-believers.”

Thus began the burning of Nalanda. Precious manuscripts, the leaves that held together the epitome of science, philosophy and literature of Bengal’s finest, became the funeral pyre of a glorious kingdom. For three whole months they burned.

The boy was in tears. How long before he can evade the nightmares of his long gone past?

Year 2018, 21st October. It still is the twelfth day of Devipaksha.

The boy has turned into a man now. He is so strong, he can put an Elephant to shame. But those nightmares still won’t let him sleep. They are the same dream, only the names change.

He can still hear the hysteric laughter of Mahmud and Bakhtiyar. But the face is slowly transforming into someone else. A beautiful luscious woman takes their place.

The same wry smile played across the woman’s lips, as she hissed:- “I will demolish all your traditions. I will make love to the deity of your temple. That temple will be my house of pleasure. I will shatter the purity of your imagined Ayappa, as I violate the celibacy of your revered deity. I will prove beyond all reasonable doubt, that your Ayappa is nothing but a lifeless piece of stone.”

“You do not know what I’m about to do.” A voice murmured softly.

The beautiful luscious woman stopped for a moment. The wry smile has been wiped off her face. Who said that?

“You do not know what I’m about to do”, said the boy again. This time in a stone cold voice. Memories of his past have finally come of age. After many many births he’s finally learned to say it back. The boy let out a wry smile, the same smile that cursed his memory for many many births.

“Hey you…” The woman tried to scream. “You are a creature of culture. Man of a proud civilization, of wisdom and education. You can not disobey the law and it’s order.”

“Educated who? Cultured who?” The boy started laughing hysterically. “Take a good hard look at me, woman.”

The woman stared at him, bemused. The boy sitting in front of him has the body of a Hindu man, but his face? It is Mahmud’s head sitting above a Hindu man’s shoulders. Or is it the face of Bakhtiyar, the destroyer of Nalanda? Or Yahya Khan, destroyer of Ramna?

“No, you can not. This is unreal.” The woman violently shook her head in disbelief.

“Oh yes I can. You have made it possible. Every time I turned to you for justice, prayed to you to save my deity; you and your ilk have humiliated me, ridiculed my dignity. Your sword has never spared me, as I am part of a defeated race. But then, there’s that one thing…”

“What is it? What is that one thing?” Asked the woman. Now her voice is trembling in fear.

“Every time your sword has drawn my blood, each drop has created a multitude of Blood-demons. Mahmud, Bakhtiyar, Yahya have all become a part of me. You are the reason for these births. The Frankenstein in me is your creation.” Said the boy in a defiant tone.

“But this is not your heritage. What about your humanity, integrity?” The woman pleaded, desperately.

“Humanity, integrity did not save my forefathers. It did not save Nalanda, Somnath, Ramna. We lost it all despite our humanity. Humanity is of no use if it can not save the humans.” The same wry smile now played wide and large across the boy’s face.

“A defeated race always learns from its’ conquerors. This is the universal truth of survival.” The boy finished his thought.

It finally came to the woman’s notice, the boy is not alone. Around him there’s an army of thousands of Mahmuds & Bakhtiyars. The blood-demons have come together with one mission. Not to destroy the temple, but to save the temple. To shut it’s gates, to protect it’s heritage. To preserve the celibacy of Lord Ayappa. The blood demons have a Hindu’s body but their mind resembles that of a barbaric desert-traveler.

The blood demons of Mahmud and Bakhtiyar took one long glance at the moon of the twelfth night. And their voice grew louder as they roared in unison- “Fight Sabarimala, FIGHT.”

An original story by Chayan Mukhopadhyay, translated by Smritilekha Chakraborty.

This story originally appeared in Bengali e-mag Bangodesh. The Original story can be read here.