The Other Side of the Coin: Conference on Hindu Traditions on Sex, Gender, and Sexuality 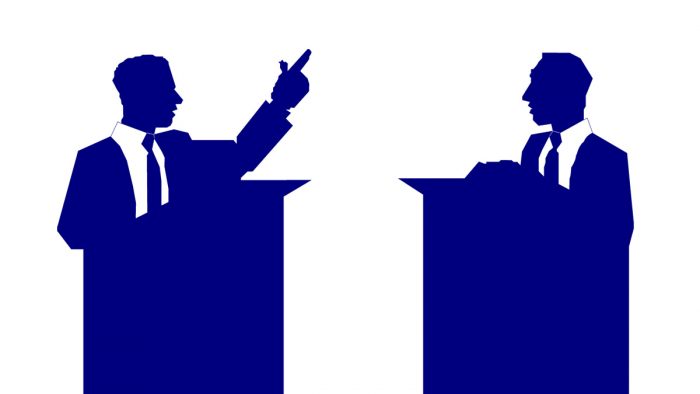 (Editorial Note: We have received a rebuttal from Humourless Arya to an event report published on 13th February, 2020. We are publishing it as it is. The readers may note that the rebuttal is to an event report, which includes statements made by different speakers at the Conference on Hindu Traditions on Sex, Gender, and Sexuality.

Neither is it our official stand, nor is it the report writer’s specific opinion on these subjects. The actual proceedings of the conference can be located on our YouTube channel. One may view the videos therein, and join issue with the opinions expressed there. We will be sending this rebuttal to all the speakers concerned, and will publish their response to this rebuttal.

Since our very inception, we at Indic Today have been committed to nurturing scholarship and debate. We will not discriminate on the basis of the author’s anonymity or credentials, but only with the nature and quality of content.)

Since American states started legalizing same-sex marriage, there has been a lot of clamour among a section of the BJP-supporting right-wing, about how Hinduism is a very LGBT-friendly religion, using quotes and analysis, some true and some not so much. While it is true that Sanatana Dharma has a more nuanced view towards most things – sexuality and LGBT being no exception, the Dharmic view towards LGBT is nowhere near as positive as people claim. Several learned Hindus have written about the Hindu view on LGBT taking a bird’s eye view. Recently Indic Today published an article about Hindu tradition in the context of LGBT issues.

Here we present a point-by-point rebuttal. The article makes some scientific claims which are no better than modern day flat-earthism, but in the spirit of steel-manning rather than straw-manning, we will not delve into them, apart from briefly pointing them out, at the end of this article.

Summary of Claims Made on the Hindu View of sexuality

The author claims Indian culture (by this we assume and restrict ourselves to Dharmic culture) was based on the spirit of Vasudhaiva Kutumbakam – meaning that the whole world is one, which granted freedom to women, but this was lost over the last 1000 years as practices like Sati and Purdah crept in. Kamasutra and Khajuraho are cited as examples to claim that the Indian society circa 1000 AD was “progressive and modern”. The Mahabharata is cited as evidence that Indians respected and had people from the third gender in their stories. The author concludes by claiming that the notion of “safe-face honour” is what has caused suffering for LGBTs, which is supposedly not a part of a true Hindu society.

The essence of the argument in the article is that early (Pre-1000 AD) India was a very compassionate society that accepted everything that is discouraged or considered sinful by the Abrahamic faiths. This claim is not based in fact. Our ancestors described those who were uncultured and ‘the other’ as ‘Mlecchas‘ and  they even had a system of out-casting those who committed deeds that were considered wrong and unnatural, as can be seen in the Dharmashastras, testifying to how absurd the original claim is. The article uses orthodox and traditional pejoratively, while paradoxically calling today’s Hindu system backward.

Then to add to the irony, the author reminds readers of Indians “aping the west” at the cost of Hinduism, while she herself cherry picks and distorts our Shastras and traditions to justify modernity and progressivism. Note that these types of activists were not justifying LGBT in the 1920s when the West looked down upon it, and look to drop any position not held by Western liberals like a hot potato.

The Myth of Vasudhaiva Kutumbakam

The misrepresentation of Vasudhaiva Kutumbakam is well documented. Here we present only a summary. This oft-quoted verse is mostly taken out of context. The most popularized form of the verse comes from a collection of tales called Hitopadesha, where its meaning isn’t positive as most people would like to believe. The story is about a jackal and a naive deer. When the jackal targets the deer for his meal and cleverly wins its trust, a crow gets alerted by the suspicious sight of this interplay and tries to warn the deer about his naivety in trusting the beast. However, the jackal protests this suspicion and opens his argument with the famous verse:-

Which means, “For narrow minded people things belong to him or others, but a person with a broad mind does not differentiate. For him the whole world is one family.” The crow has to back off, but remains vigilant from a distance. Finally, when the jackal tries to strike, the deer is saved by the crow’s intervention. So, the obvious moral from this story is that only a fool would believe in something like “Vasudhaiva Kutumbakam”. It is also found in an Upanishad, but the context is not being open-minded (more here).

Sati in Hindu literature goes back to at least Madri in Mahabharata. The earliest widely accepted historical occurrence is that of the younger wife of the Hindu general Keteus, who died in 316 BC fighting against the Greek Antigonus. Keteus had two wives and like most royal wives, as historical records suggest, both of Keteus’ wives were eager to die, but only the younger one got her wish. In addition, it is reflected in the writings of poets and dramatists of the classical period (200 AD – 600 AD) like Bhasa, Kalidasa, Sudraka etc., that they were aware of Sati too.

Next, on the topic of Parda Pratha, even a text as old as the Valmiki Ramayana has references to the practice of veil. Once, when Sita Maa was brought to Shri Rama in covered palanquin after Shri Rama’s victory over Ravana (Valmiki Ramayana 6.114.14-15 & Valmiki Ramayana 6.114.18-19), and the other instance is when Mandodari is shown mourning the death of Ravana. She asks Ravana why he’s not enraged seeing her and his other wives unveiled.

O Lover of your Consorts! Look at all your spouses, who came out, with their veils dropped off. Why are you not getting enraged in seeing this.” (Valmiki Ramayana 6.111.63-64)

As we have shown, Sati and Parda go back more than two millennia in history and are attested to in our Itihasas. These claims of them being recent additions to Hindu culture do not hold up to scrutiny.

The people making bogus claims would no doubt be abhorred by this suggestion. For more info on the true symbolism of the sculptures, please read The Religious Imagery of Khajuraho by Devangana Desai.)

The Kamasutra and the Sexual Revolution

Despite all claims of the Kamasutra being a promiscuous text made in the article,  Vatsyayana says the text should only be read by a married person without neglecting the periods for the study of Dharma (KamaSutra 1.3.1). Contrary to the popular belief of the Kamasutra being a liberal text, it talks about how a student should remain celibate until his studies are finished (KamaSutra 1.2.6). Furthermore, while talking about what type of a woman a man should choose to marry, it says to choose a woman of the same class and someone who hasn’t had a man before(KamaSutra 3.1.1). Later in the same chapter, Vatsyayana also talks about avoiding a girl who has a disreputable name and one whose purity has been defiled (KamaSutra 3.1.11).

“In childhood, he should strive for goals such as the acquisition of knowledge; in youth, sensual pleasure; and in old age, religion and release. Or he should pursue these aims as the situation permits, since his lifespan is uncertain, but he remain celibate until his studies are finished.”

“There is religious merit, wealth, sons, social connections, reinforcement of one’s faction, and normal sexual pleasure with a woman of the same class who has not had another man before and who has been obtained according to scripture.”

Shikhandi in the Mahabharata

The article refers to Mahabharata having a story that includes a character of a third gender. We assume this is referring to Shikhandi as it is an frequently repeated story in these circles. Here we attempt to show how it is a misrepresentation of the epic, exhibiting why Dharmics should be careful while quoting sources. Interpolations in Hindu texts to fit the narrative of something has occurred very frequently since the advent of German Indology.

Shikhandi was born to Drupada by Lord Shiva’s blessing. Mahadeva forecasts that Shikhandi will take part in a Dharma Yuddha by attaining manhood. Knowing this, his family didn’t reveal that a girl was born. He was raised like a man, taught everything a man should know. Hoping for Mahadeva’s words to come true, he was married to the daughter of Dashraja. Later when Dashraja’s daughter came to know that Shikhandi is a woman, her father planned an attack on Drupada with some other kingdoms. Shikhandi, realizing that she was the root of this war about to happen, leaves for the forest, and meets a Yaksha named Sthūṇākarṇa. Seeing Shikhandi’s plight, Yaksha asks if he can help her, and Shikhandi asks for Purushatva. Yaksha takes her womanhood, and grants Shikhandi manhood. Thus, Shikhandi becomes a man. Nowhere does any mention of third gender comes into the story.

We reiterate that the Hindu view of LGBT has not been celebratory, either in scripture or traditions. There are numerous examples from the tradition we can cite to support this claim. One is that in Hinduism a yajna is considered incomplete without the involvement of one’s wife, and another is that the primary purpose of marriage according to Hinduism is continuing the biological lineage. Adi Shankaracharya in his commentary of Taittiriya Upanishad (1.11.3) says,

“As a return for the knowledge, do thou obtain for the teacher a most acceptable wealth and give it to him. Then, with the permission of the teacher, secure a suitable wife and prevent break in the line of descent. It will not do to bring about a break in the line of descent. That is to say, if a son is not born, attempts should be made to get a son by means of sacrificial rites such as the Putrakamya-iṣṭi, a rite performed with a view to get sons. This appears to be the meaning of the śruti because of the mention of three duties, “offspring, begetting, and propagation.””

It is easy to see that so-called progressive and modern ideas were non-existent in pre-industrial revolution societies; let alone in Hindu society circa 1000 AD. One can not separate culture from religion in natural religions like Hinduism, and hence claiming that honour is not a religious practice but a sociological one is just an exercise in reductionism.

We conclude by appealing to people who are infatuated with liberal ideals to not desecrate and misrepresent Hindu texts to justify them.

The article claims, “Humans start with a gender-neutral embryo and the sex determination happens only after seven weeks due to a complex combination of genes.” This is elementary middle school biology – the sex of the foetus is determined during fertilization and only chromosomes are involved, not complex genes as some would like to believe. The author claims “Chromosomal presentation of XX or XY is only one aspect of biological sex, and we currently know close to hundred genes that can regulate sexual development, irrespective of the chromosomal component”, which seems to miss the point that genes reside on chromosomes and hence “regulation by genes irrespective of chromosomal content” just makes no sense.