Ram Mandir at Ayodhya is Not Just About Ram 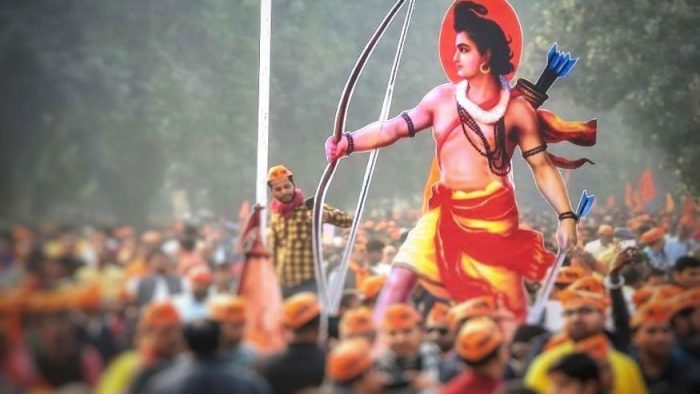 It is remarkable that Bodhan, a place I grew up in Telangana, is over a thousand kilometers by road from Ayodhya, and yet this small town reverberated with the chants of Jai Shri Ram during this period. Kar Sevaks on way to Ayodhya in 1992 were taken house to house, felicitated by residents – by garlanding them, washing their feet, and applying tilak on their forehead to bless them with victory as sons of Bharat Mata.

Most of these Kar Sevaks were complete strangers to these families and the only bond they shared was their common belief in Ram. Kar Sevaks were followed by cheering crowds shouting slogans, that in hindsight sounds prescient, but these were just cries of hope at that time:

We take an oath on Ram, we shall build a temple right there! Jai Shri Ram!

For many sanātanis, the Bhoomi Pujan (Ground-breaking) ceremony of Ram Mandir at Ayodhya on August 5th is a long-awaited return of Maryada Purushottam Ram to his home, following hundreds of years of exile. For many others, including people like me who were associated with the RSS at some point, it means much more. A mandir at Ayodhya reflects the Hindu community’s willingness to assert its identity, and reclaim its self-respect. A community subjected to centuries of humiliation is finally able to acknowledge its civilizational past. This is a new beginning.

The ceremony is the result of the sacrifice of millions of kāryakartas (workers) and leaders across India, who toiled day and night at various stages of the Ram Janmabhoomi movement. In this long-drawn struggle, many visionary leaders and their foot soldiers, unfortunately, didn’t live to see the fruits of their labor.

This movement spanning several decades serves as a reminder that any social change comes about as a collective contribution of many selfless individuals. It is not a coincidence that the philosophy of RSS, the parent organization primarily responsible for the Ram Mandir movement, revolves around niswārth sevā bhāv (selfless service).

Spending one’s precious time with people not related to you, and for no personal reward, subconsciously triggers the spirit of being part of something larger than the individual. The Ram Janmabhoomi movement was largely carried on the shoulders of individuals who shared such common values about India’s civilizational past, and who shared a feeling of camaraderie with their fellow Hindus – both attributes nurtured by RSS Shakhas.

Though the movement was spearheaded by Vishwa Hindu Parishad (VHP), a sister organization of the RSS, the cadre at the local level in many places was predominantly from RSS. I was only ten in 1992 but I have vivid memories of what I saw on the streets and what I heard from family friends throughout this period.

My father being a core member of local RSS leadership, grew up in an environment of frequent visitors at home, bringing with them their experiences and stories. Looking back, I can put together a more coherent view of past events that were not clear to me at that age.

At the core of RSS is a daily gathering of men called ‘Shakha’, which involves among other things vyāyām (physical exercise), khel (games), geet (singing), boudhik (message or speech) and prārthanā (prayer). Among these, Khel and Boudhik are particularly effective in team-building and in fostering shared values. Boudhik consists of inspiring messages about the valor and sacrifice of our national heroes, drawn from India’s civilizational past.

Khel works as a bonding exercise bringing people from various backgrounds together and instills a feeling of brotherhood. It is important to note that most of the people attending Shakha come from socially disadvantaged backgrounds, and RSS is the only avenue available to them for understanding their Hindu identity.

And it is one of the few places where they are treated as equals. Shakhas routinely involve giving one’s parichay (introducing self) in the presence of others, thus encouraging people from all backgrounds to feel comfortable with oneself, and identify themselves as part of the broader Hindu community. Punctuality and discipline – key for effective collaboration – are other aspects stressed in Shakhas.

Leaders of various Sangh organizations acted as a bridge to connect Kar Sevaks from villages to towns to cities and on to Ayodhya. Many Kar Sevaks walked tens of kilometers in the last stages of their journey to Ayodhya when all transport facilities were restricted by the Government.

In an era with no quick modes of communication, the ability to facilitate the mobilization of thousands of Kar Sevaks from across the country reflects the reach, meticulous planning, and organizational skills of Sangh.

One reason why the Ram Janmabhoomi movement had resonance in a place like Bodhan was because of the significant Muslim population. A large number of Hindus coming out to support the movement was a reaction to the sense of identity and unity that the Muslim community already shared among themselves. Muslim students at school cheering for Pakistan against India in Cricket was fairly common.

During the Gulf war of the early 90s, kids at school would express solidarity with their Muslim friend’s thousands of miles away by scribbling Bush Under Saddam’s Heel (a play on the then US President George Bush Sr’s last name) on their books.

One particular incident that occurred in my class when I was about ten demonstrates the willingness of some Muslim kids to put religion above any man-made rule. Wearing a skull cap (or any cap) in school was against rules but the rule was rarely enforced for fear of stoking anger from the Muslim community.

One day in class, the newly appointed principal showed some spine and asked a student to remove the skull cap he was wearing. The student had the gumption to tell the principal that he will remove his skull cap only if the Hindu kids in the class remove their bindis.

In spite of religion playing a predominant role in day to day life of Muslims, relations with Hindus at a personal level were largely cordial. But things were not so pleasant at the community level with Ganesh Chaturthi being one of the flashpoints.

Ganesh Chaturthi was a time of great bonding within the Hindu community, involving various cultural activities during the 11-day festive period. However, the day of Ganesh Visarjan was always full of tension, with fears of communal clashes between Hindus and Muslims.

There were incidents of stone pelting from the mosque aimed at Ganesh mūrtīs in earlier years, which made the police extra cautious. The Ganesh Visarjan procession would carry hundreds of Ganesh mūrtī from various homes and Ganesh Mandals, proceeding towards the immersion point.

This process, involving chanting, dancing, and āratīs, at various places along the way would take many hours. En route, the procession had to go past a mosque that had a scheduled daily Azaan around 8 pm.

Any noise emanating from the loud Ganesh procession was deemed as an interference with the daily Azaan and was not acceptable to the local Muslim community. So, the police and local elders would go out of the way to slow down or rush the crowd, to avoid the Visarjan procession being near the mosque at the time of Azaan.

Two things from this experience find a parallel in the larger Ram Janmabhoomi movement. One, the onus is always on the Hindu community to maintain peace. Second, forcing a false equivalence between something special for Hindus versus something routine for Muslims.

Ganesh Visarjan is once a year event for Hindus, while Azaan is performed five times a day by Muslims. Ayodhya is the holiest site for Hindus whereas it is just another disused mosque for Muslims. Portraying both as being of equal importance is disingenuous and unjust.

The determination of many Hindus to see a Ram Mandir at Ayodhya is also a reaction to the intransigence of the larger Muslim community in accommodating things of special value to their Hindu friends.

This was not inevitable. Political leadership in post-Independent India could have nurtured a more harmonious relationship between communities by defining India in civilizational terms. Instead, our leadership defined our identity purely in secular terms, on the basis of our Constitution. Worse, a perverted form of selective secularism was practiced for vote bank politics, driving the communities further apart.

The responsibility of recasting its image and defending its interests lies solely with India. Looking for validation from the outside world is not only futile but dangerous. Hindus, making up the largest community in India are least understood outside India primarily because they are unique. Other so-called ‘Pagan’ cultures have long been decimated and Hinduism is the last bastion of Pagans in a world dominated by Abrahamic religions.

A world increasingly dominated by the West, by default favors uniformity – which is the antithesis to Hinduism. The recent controversy related to the entry of women into Sabarimala temple is a case in point. Hindus need to take control of their narrative and demonstrate to the world their ability to resolve complex issues in peaceful, democratic ways. Despite the long wait, the Bhoomi Pujan ceremony at Ayodhya will be cherished for a long time particularly because it came about within the ambit of the law.

A new Ram temple at Ayodhya will mark the beginning of a new, assertive India that identifies itself in civilizational terms. It places an enormous responsibility on our political leadership to steer all communities towards this new idea of India in a peaceful and mature way. Given the mistakes of the past, this is by no means easy and will by no means be perfect. However, India took the first step on August 5th, and there is no looking back.

PS: My experience in relation to RSS has been as a Swayamsevak over twenty years ago, and I have never held any position in the Sangh. RSS has not contributed to this article in any form.

Krishna Chivukula works in the Financial Services Industry and is an avid follower of Dharmic issues & Contemporary politics.