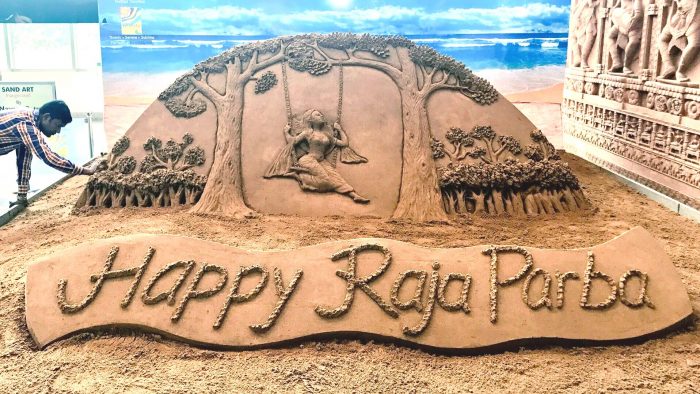 Women in the form of Prakruti have an established position in the Sanatan Dharma and also in the Puranic scriptures. “The Encyclopedia of Religion and Nature”, refers to Prakruti as the feminine aspect of all life forms, and more specifically a woman is seen as a symbol of Prakruti. Prakruti also means that aspect which gives shapes or forms, signifying nature or pure energy. The woman represents Mother Nature and nature personifies life that is forever evolving, altering, multiplying, and manifesting itself with the urge to give, grow, and gather. A woman is a giver, a benefactor of life who contributes to adding numbers to humankind. It’s the biological difference that makes the woman’s womb the initial capsule of life. The seed of life that grows within the female kind finally sees the world post the gestation period. An alternative for this remains unknown. In Hinduism, ‘Yoni’ the female genital and ‘Linga’ the male genital are worshipped in the conjoined representative form of Shiva, and Shakti and the unification of the two create the tangible beings that are ‘Life in existence’.

The most extreme iconography of female corporeal representation of ‘Yoni’- The female genital, can be seen in the lotus headed Divine representation of Lajja Gouri  –Lajja meaning shy and Gouri who is Parvati. This form of Shakti is worshipped as the Modest Goddess of fertility and abundance and addressed as Lajja Gouri. Faith holds that by worshipping the Lajja Gouri women having problems with their puberty, issues with menstruation, child conception, and gynecological concerns are solved. An inseparable aspect of being a woman, a life-giver, and a creator is the occurrence of the menstrual cycle. Menstruation is a physiological process related to the propagation of our species. This blood discharging process happens in healthy and fertile women on a monthly basis. Every month, a woman is biologically made ready to play the creator. What clutches the natural flow of creation from being acceptable and celebrated are the religious and social taboos associated with this phenomenon. The cultural impact on breeding negative menstrual attitudes has been long-standing and imbibed in the social weave.

Jagannath Sanskruti is mystical and enigmatic. The practices and celebrations are a blend of aboriginal and Vedic practices. The Ratnasinghasana at the sanctum sanctorum of the Srimandira has seven Deities. The wooden idols of Shri Jagannath seated with his elder brother Shri Balabhadra and Younger sister Devi Subhadra along with Sudarshana. He also shares the Ratna Bedi with Madhaba carved in wood and his two wives Sri Devi and Bhu Devi. The idol of his wife Sridevi is sculpted in gold and represents Goddess of wealth, Devi Lakshmi. The idol of his wife Bhu Devi is sculpted in silver and represents the Goddess of Earth, Devi Basumati. As per Puranic scriptures, Bhu Devi is the epitome of the entire Prakruti. Legend has it that Shri Jagannath is in the sick quarters during the Anabasar period, his wife Bhudevi goes for a three-day-long menstrual cycle and becomes Rajaswala. Thus ‘Rajo’. The word ‘Rajo’ or ‘Ra-jaw’ as it may be aptly pronounced, is a festival rooted in the Jagannath culture and celebrates the menstruating cycle of Jagannath’s wife Bhu Devi – The Goddess of Earth. Rajo is celebrated in Orissa as a fertility festival of the Earth. It is an annual celebration to honor Mother Earth’s capacity to create life and her power in allowing the emergence of life-sustaining factors. The lines below suggest the power of Mother Earth:

The above lines translate to – Om you are the purpose of sensory awareness; you are the Goddess who distributes the forms of the Earth. You are the creator of the Universe, the sustaining element of all things accessible in the universe. Control (or sustain) the earth, firmly establish the earth, make the earth efficient in its motion.

The word ‘Rajo’ may be translated to ‘blood’ in Sanskrit.  The Festive name Rajo originates from the Sanskrit word ‘Rajaswala’ meaning ‘menstruating woman’. The festival recognizes the importance of menstruation in women as a blessing as against a taboo. It is a festival that celebrates menstruation, fruitfulness, and feminine capacities of creating and fostering life. The Rajo festival is celebrated across Orissa for four days. The day before day one is the preparatory day and is called Saja Baja. The day one is Pahili Rajo, the second day falls on the day of Mithuna Sankranti when the Sun transits from Vrishabha Rashi  (Taurus) to Mithuna Rashi (Gemini).  The transition marks the beginning of the Hindu month of Ashada. The third day is celebrated as ‘Basi Raja’ or ‘Bhu Daaha’ and the fourth day is the ‘Basumati Snana’. On a concluding day, the day of Basumati Snana the stone used in the hand grinder is considered as the representation of the Mother Earth of Bhumi. Women give a ritualistic bath to the grinding stone with water, turmeric and sandal paste and then decorate it with flowers, vermillion, earthen lamp, and aromatic incense sticks. A variety of the last reap of summer fruits that include mangoes, pineapples, jackfruits, tender palm, etc. are offered to mother Bhumi. Most of the Rajo rituals have aboriginal links. Traditionally the first day of the festival is dedicated to the bathing of girls, scrubbing their bodies with a paste of turmeric and oil followed by an early morning bath. As per tradition bathing for the next two days is prohibited. The fourth and the last day marks the ritualistic bath of Bhudevi or Basumati Snana , signifying the ending of  Mother Earth’s menstruation cycle.

The Maha Vishuba Sankranti marks the welcoming of summer and Rajo Sankranti or Mithuna Sankranti bids adieu to the scorching summer and marks the welcoming of the monsoon. The Rajo festival also marks the beginning of the agricultural calendar in Orissa. The Earth that is arid by the hard summer sun looks forward to the monsoon showers to drench her and encourage the germination of foliage and agriculture in the cultivation period scheduled ahead. As an honor to Mother Earth, the farmers refrain from ploughing or digging the Earth or doing any agricultural activity as she is menstruating and readying herself for another fertile copping season. The reference below confirms her as a life force.

The above lines mean: In Her reside the Four Directions of the World; in Her is enclosed Food which She manifests when Ploughed, She sustains a variety of lives alive in Her; may She, the Mother Earth, bestow on us the ray of life present even in Food.

The Rajo festival is primarily a celebration dedicated to the entire womenfolk of Orissa. Women are given a break from the kitchen and the daily chores. Traditionally nothing is done to scuff the earth, nothing is grinded instead the grinding stone is put to rest and worshipped. Nothing is allowed to be cut, torn, or cooked during the three days. Young girls spend the entire three days dressing up, wearing new clothes, playing indoor games, and swaying on the Rajo Doli (rope or bamboo swings) hanging on trees. From little girls to prospective brides all are made to feel special as they hold the future of creativity within themselves. Walking barefoot is a strict no for girls during the festival. Women and girls color their feet red with alta, adorn their foreheads with dots of sandalwood paste, and dress up to look their best. Food during this festival has a spread of pithas and the main attraction being the ‘Podo Pitha’– A rustic rice cake slow-baked in wood and fire and kept ready to be consumed throughout the three days of festivity. ‘Rajo Pona’ the slushy fruit, yogurt, and milk-based pastoral smoothie. Finally, not to forget the ‘Rajo Paan’, sweet bundles of betel leaf are shared as a festive gesture with friends and family. The Ambubachi Mela is a similar festival, celebrated at the Kamakhya Devi Peetha at Guwahati in Assam. The festivity celebrates the annual menstruation period of Goddess Kamakhya that falls during the Mithuna Sankranti and is a tribute to Mother Earth.

Rajo confirms the presence of life in life itself. Hinduism has a very inclusive approach to encompassing every aspect of life in itself. Faith has a limitless horizon. It can evolve from anywhere and lead to create diversified visions. These visions can transcend beyond geographical margins and social limitations. The fluidity of Sanatana Dharma makes it magnanimous. Each vision is critical and has a message that adds value and dimensions to be decoded and understood. There may be many debates on the subject of menstruation, the fact remains that the menstrual discharge is essential for the ever-moving cycle of life. The rudimentary mindset that has been made to accept this natural process as a taboo needs thoughtful reconsideration.

(Editor’s Note: We are running a series of articles describing the various rituals of the Jagannath Yatra. The first part deals with Jagannath’s Snana Ritual and the Anasara Quarantine and the second part discusses Anabasara – Shri Jagannath’s Isolation Ritual )

All images from Google.