Note On The Significance Of Rituals 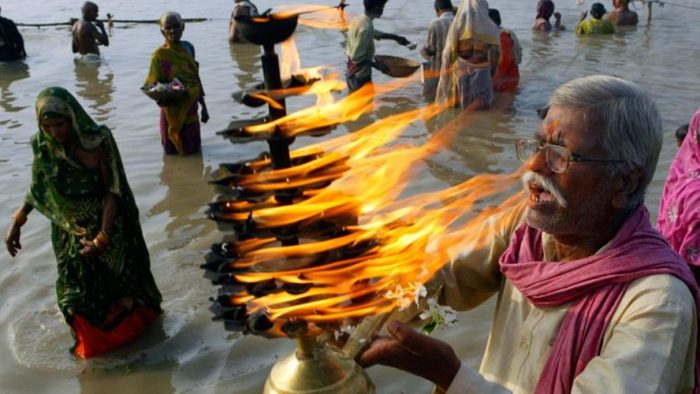 Rituals are ridiculed by the self-styled rationalists alleging that they are meaningless and superstitious in nature. These rationalists are quite often ignorant of the essentials of the Hindu thought. Even those who perform the rituals, do it in a mechanical way, seeking some personal gain by performing them. Some others, who are believers in God, would like to avoid rituals and try to label themselves as spiritual but not religious.

Sometimes, even the students of Indian philosophy may doubt the relevance of rituals. The realization of oneness, or non-duality of Reality, would lead to interesting consequences and questions. Vedanta says that an enlightened person goes beyond the framework of karma and rebirth. His individual notion of Self (ego) has evaporated in the ocean-like consciousness of Brahman. Karma, the whole mass of rituals mentioned in the texts, is of no use for him. We even find some teachers of Vedanta discouraging ritualism and appearing almost iconoclast in their approach. Non-dual Vedanta (NDV) is also accused of being crypto-buddhist, bordering on agnosticism. On the other hand, we also find the greatest living preceptors of Advaita – the acharya-s of Sringeri, Kanchi, Puri etc., performing elaborate worships in their Peethams and also doing उपासना of certain deities according to their Peetham tradition. So, when followers of Vedanta practice rituals, a question follows whether they not fully enlightened, or are they following some double standards or duplicity? When the individuated consciousness, जीव, is none other than Brahman, whom is he worshipping and where is the need for several gods, idols or rituals?

I wish to examine the question in two parts – first, why does the NDV accept rituals, and second, the way in which they are integrated with the NDV without any compromise on the doctrine.

The Vedas take into consideration all levels of people, not merely the thinkers and seekers. The texts have to take everyone along by going down to the person’s level and prescribing a path suitable to the person. This approach is clear throughout the प्रस्थानत्रय. The Upanishads clearly talk of the उपासना-s, the Brahma-sutra-s devote a whole chapter on this and the Gita makes it more clear. I will examine the issue mainly from what we see in the Gita.

Krishna discusses this clearly in the Ch. 12 of the Gita. The followers of the nirguna path reach me, ते प्राप्नुवन्ति मामेव. But for the followers of the saguna path I am their savior, तेषामहं समुद्धर्ता. In the process of समुद्धरणम् he suggests several steps which cover our topic completely. In 8-8, he suggests contemplation on the विश्वरूप, the cosmic form – मय्येव मन आधत्स्व. The commentators explained the word ‘मयि’ as मयि विश्वरूपे, ‘in my cosmic form’. In the next verse (8-9), Krishna comes one step down and says, ‘if you are unable to do this, at least do abhyasa yoga. The word ‘abhyasa’ is explained as dhyanam with some alambana, an idol, a picture etc. Keep an idol, achieve concentration and aspire to come to viswarupa meditation. Introduction of idol is done with a purpose and not in a foolish way. In the next verse, Krishna steps down further. He says, मत्कर्मपरमो भव, try to do some activity related to me. The commentators Nilakantha and Madhusudana Saraswati have interpreted the word matkarma to mean the nine-fold path of devotion – श्रवणं कीर्तनं विष्णोः etc. In the next verse (8-11) he steps down further and says, ‘if you cannot do even this, in such case perform karma yoga at least’.

The sub-commentators have explained the point further. The भाष्योत्कर्ष दीपिका quotes the Br. Su.1.1.20 अन्तस्तद्धर्मोपदेशात्, in which it is pointed out how the Upanishad is referring to the upasana of Brahman and not to the person in the eye or in the Sun. Madhusudana Saraswati quotes:

The idea of Vedas is to uplift even the most common person by coming down to his level and by suggesting what is suitable to him. This is in perfect consonance with the NDV. There are no double standards or duplicity. Krishna gives one more reason in a different context. He says:

सक्ताः कर्मण्यविद्वांसो यथा कुर्वन्ति भारत ।
कुर्याद्विद्वांस्तथाऽसक्तः चिकीर्षुर्लोकसङ्ग्रहम् ।।3-25।।
Just as the unwise persons, seeking the fruit of action, get engaged in karma, the wise should also engage in karma, without attachment, for guiding others in the right path.

Krishna gives his own example in three verses starting from न मे पार्थास्ति कर्तव्यम् … (3-22). He tells the reason also. If the wise person stops doing karma, all others too would follow (यद्यदाचरति श्रेष्ठः – 3-21). Hence the enlightened person performs it in order to make people follow the same path and lead a harmonious life. (This is not forceful imposition, as in the other religions).

Among the four types of persons who worship God, ज्ञानी too finds place (Gita 7-16). It says – ज्ञानीत्वात्मैव मे मतम् (Gita 7-18) – ज्ञानी is my own self. How can the self worship the self? For this riddle, Gita talks of two types of भक्ति in this context – भक्ति with the notion of duality (worshipper-worshipped relationship) and भक्ति with the notion of non-duality, called अनन्यभक्ति (9-22, 11-45, 13-11). The unenlightened person is in the mode of duality while the enlightened one knows that he is in essence not different from the Supreme, but he continues to worship. Three reasons are identified for this – 1) he does it in order make his knowledge steady (आवृत्तिरसकृदुपदेशात् Br.Su.4-1-1); 2) for लोकसङ्ग्रह and 3) out of love for the Self (सा त्वस्मिन् परमप्रेमरूपा Narada.Bh.Su-2). Thus, there is no duplicity or condescension in his behavior. The ritual becomes a philosophical meditation.

An important contribution of this non-dual vision is that it integrated the भरतवर्ष peacefully. It harmonized different traditions (षण्मतस्थापनाचार्य). Without NDV, the country would have broken into pieces long ago. Rest of the world witnessed Darwinism among religions – it was the survival of the fittest.

We may now examine the integration of rituals. When Reality is One, why did our sages evolve and prescribe various rituals? They did this to accommodate various traditions, but while doing so they remembered that the highest human goal is realization. Hence, they adopted an ingenious strategy to gently induct a worldly person into the path of knowledge. A worldly person would not even perform rituals unless some merit (पुण्यम्) is promised. Rituals promise such पुण्यम् but mantras included in them are so selected that they can slowly lead an alert person to the higher goal of self-knowledge (गुडजिह्विका न्यायः). SB on the Gita (2-11) says – स्वर्गादि कामार्थिनः … काम्य एव अग्निहोत्रादौ प्रवृत्तस्य सामि कृते विनष्टेऽपि कामे … न तत् काम्यम् अग्निहोत्रादि भवति – a person engaged in a desire-oriented action may, during the course of such actions, get enlightened. For such person such actions are no longer desire-oriented actions.

To see how intelligently the rituals are structured in our daily routine, we can examine our daily rituals. To start with, we can see the सन्ध्यावन्दनम् (SV), which is a mandated karma (नित्यकर्म). Non-performance of this would lead to sin and hence it has to be done. At an ordinary level, SV is a ritual which is mandated to be performed three times a day. For an intelligent student, it is a guided meditation which helps him to remind him of his divine nature. Performing it three times a day would mean that a person would adjust his spiritual vision in such manner and goes about with his daily routine. It is the vision of our Vedic seers to purify the individual and promote right action in society.

In the performance of any व्रतम्, there is a component of charity. For instance, while giving दानम् at the end of the विनायक व्रतम् one says गणेशो प्रतिगृह्णाति गणेशो वै ददाति च, meaning that गणेश is the giver and he is also the taker. He is the all-pervading one. Thus Ganesha is praised as the Supreme Brahman.

If we take any other व्रतम् also, the same spirit is seen. In अनन्त व्रतम् we say अनन्तो प्रतिगृह्णाति. In the सरस्वती व्रतम् we say भारती प्रतिगृह्णाति etc and in the वरलक्ष्मी व्रतम् we say इन्दिरा प्रतिगृह्णाति etc, meaning that we are worshipping these deities as the Supreme Reality.
Any visitor to Tiruchanur temple would notice that during the ritual of अभिषेकम् of the goddess, the entire तैत्तिरीयोपनिषद् is recited. We know that the Upanishad has no connection with अभिषेक but the philosophical passage is built into the ritual.

In most temple rituals, the recitation of पुरुष सूक्तम् and उत्तर नारायणम् is essential. These two are not mere prayers seeking prosperity or fulfillment of desire but they are philosophical passages. They are exercises in achieving the vision of oneness. The passage says – स ब्रह्म स शिवः स हरिः सेन्द्रः सोऽक्षरः परमः स्वराट्. The Supreme Reality is in one’s own self and it is called by several names such as Brahma, Vishnu etc. We get a similar expression in the मन्त्रपुष्पम्, which says – त्वं यज्ञः त्वं विष्णुः त्वं रुद्रस्त्वं प्रजापतिः. A mature devotee is expected to realize that the Supreme is in fact dwelling in his or her own heart.

Our भोजनम् is also a यज्ञ. The Gita says अहं वैश्वानरो भूत्वा (15-14). The commentary of Sri Shankara elaborates – भोक्ता वैश्वानरः अग्निः, भोज्यम् अन्नं सोमः, तद् एतद् उभयं अग्नीषोमौ सर्वम् इति पश्यतः अन्नदोषलोपः भवति. For the person who realizes that he is propitiating the Supreme Being which is present in the form of fire in all the beings, the act of eating becomes equal to अग्निष्टोम यागः.
Some rituals like the चण्डी याग involve recitation of देवी सप्तशती in which the goddess is said to kill several demons. Unless the symbolism is understood, one is likely to think that the goddess is cruel, blood thirsty etc. The sages have portrayed the hideous nature of negative emotions by personifying them as demons. The positive tendencies are portrayed as divine beings.

Eradication of negative emotions is the theme. For instance, in the story of रक्तबीज in the same सप्तशती, the theme is complete eradication of वासना-s which obstruct the spiritual growth of a person. (See the chapter वासनाक्षय in the book जीवन्मुक्ति विवेकः of Swami Vidyaranya).

During the nine days of Devi Navaratri, young girls are dressed up as goddesses and are worshipped. This is known as बाला पूजा and is meant to inculcate the idea of purity even from the tender age. Prayers like विष्णुसहस्रनामावली, ललितासहस्रनामावली present the summary of Vedanta in simple terms.

The uniqueness of Hindu tradition is that our rituals are shaped under the umbrella of the philosophy of the Upanishads. We understand them depending on our level of maturity. Teachers of Vedanta mention two levels of reality – the absolute and the transactional. The ज्ञानी is at the absolute level and the common person is at the transactional level. In fact, they are not two levels of reality, because truth is always one. There are only two levels of people – those who think that the BMI is the Self and the others who think that the individual Self is not different from the Supreme Self in its essence. For the common person the ritual is a ritual, but it is a philosophical meditation for the enlightened one. 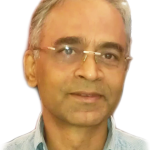 Dr. Karnam Aravinda Rao, IPS, retired as Director General of Police of the combined Andhra Pradesh state. He holds a Ph.D in Sanskrit and hasRead more