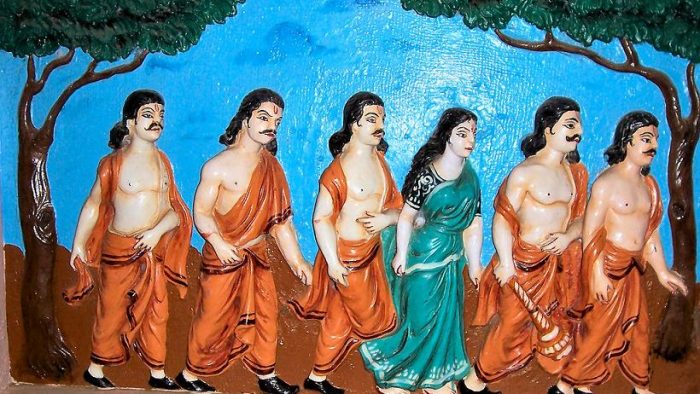 The Pandavas spent the final year of their exile incognito called as the ajnata vasa. They did so in King Virat’s kingdom taking on different identities and serving the Kingdom such that they would not recognized for who they are. Arjuna, who was an ardhanari as Brihannala who taught dance to King’s daughter; Bheema took on the role of a Ballava, Yudhishtra was Kanka a minister to the King advising him on the kingdom’s administration, Nakula tended to the horses as Granthika, Sahdeva took care of the cows as Tantipala and Panchali as Sairandhri; was one of the maidens to the Queen.

The ajnata vasa was a crucial period for the Pandavas not because it was the final year in exile but because this was the period they confronted their disowned self and what happened after this as we all know, is the war which led to their victory.  The exile period in their lives after the loss of the game of dice was such that it allowed them to delve inwards, step back and look at themselves and their context. But the thirteenth year is when they came to be aware and accept their disowned sides.

For thirty years I had faced defeats in school with respect to academics, disappointments of not getting into the best colleges, anger at myself for not being capable enough, thick defense walls against outsiders and all the parts of me that I completely abhorred. These patterns of these duhkhas continued and really saw no change despite my futile efforts of coaching myself, affirmations, positive talk etc.

I could not understand what I was doing wrong. I was not only soul searching, but also looking for answers to my how’s, why’s and what’s. A grand opportunity came in front of me or rather it manifested in my life; The Mahabharata Immersion Lab. The six-day lab was not a typical classroom lecture which is what I was accustomed to and there were no theories taught. It was a safe experiential lab space created to get in touch with our inner being through Indian theatre (Koothu), dance (Bharatanatyam) and self-reflective art. It was not a space to show off your talents or the lack of it but to aid you in stepping back and re-creating your psycho-dramas and stories through theatre and movement.

The expression through the body movements during dance and theatre were enough proof for me (because they did not entail words from my imagination) that I had a beautiful sensual feminine side which I was not nurturing in my life because in the current patriarchal society I ought to be the alpha male walking around with an armour and was only nurturing my masculinity instead. The navarasa anubhava through nritya allowed me to see that I am so comfortable to enter the raudra (anger), veerya (courage) and bhayanaka (fear) rasa but found it equally difficult to explore shringara (love) rasa or karuna (compassion) rasa.

None of this was false, but the difference was that my mind was not telling me all this, but I accessed my body which has kept a log of the scars, memories of my past hurts, deprivations etc. As they say, your mind may lie but your body never lies if only you choose to listen to it.

The last two days of the immersion ripped me apart completely, because here is where the Mahabharata story of your favourite character had to be enacted; in my case it was Karna. My group of co-explorers had enacted the scene where Kunti reveals to Karna about his identity. My entire psycho-drama of anger, anguish and lack of acceptance played out and I watched myself standing behind myself in shanta and of course it was there for everyone to see it.

Karna was as capable as Arjuna and other Pandavas but because of the hurts and humiliation he goes through as suta-putra; the anger engulfs his life and actions, leading him to side with the Kauravas. The beauty of Mahabharata is that it is full of archetypal energies residing within all of us, and I was holding a strong Karna’s energy at that point in time, knowing full well about my capabilities yet not doing something worthwhile with them in my life.

I realized that my anger and disgust was towards myself, which I was projecting on anyone and everyone who came into my life. My patterns of behaviour and the deeper cause of it came into light through the experience.

What was so significant and different about this experience one might ask? I could only appreciate and understand the profundity of this process now, almost after a year. The last one year has also been my ajnata vasa wherein the lab was a trigger for me to go into a sort of an exile to look at my inner self. To look not in the ways of the usual western theories and affirmations that only sit at the manomaya but allowing it to seep through the pranamaya level.

Most importantly, it told me how to accept the shunned disowned parts, the unresolved anger, the sensitive feminine side and even the resolved parts as ME. The more I banish them and ‘manage’ them the stronger is the hold of the prana on these patterns, thus they only strengthen and re-enforce my defence mechanisms rather than lead to a transformation. The moment I learn to be aware and accept them wholly from a space of shantam and compassion the more liberating it is for me.

As Jose Stevens said in his book ‘Transforming Your Dragons’, the dragons which are a symbol of our fears actually fear being seen and just being aware of them is enough to reduce their power. My antaranga sadhana post the immersion has propelled me to be aware about the patterns where I project my anger, shame and guilt onto others and not owning up to them.

Unfortunately, we have been conditioned to look at emotions such as anger and other disowned ‘not so nice’ parts as ‘weaknesses’ and ‘bad’ whereas these are significant parts of oneself, and without acknowledging them one cannot hope to be the best that one can be. It was not until Arjuna embraced his feminine side or Bheema owned up to his lust and greed that they could fulfil their dharmika duties as great warriors.

The asuri and daivi parts are all within you and you cannot banish the asuri parts but only invite the daivi forces to take prominence in guiding your actions. To make space for the daivi forces one must start to look at these parts and the context from a third perspective; the perspective of isvara (higher intelligence) within you to help you navigate through these dharmasankatas. All of these are part of your whole and even if you take it out it will always remain part of the whole.

(The article was earlier published on indiafacts.org)