Katha Series: The Princess of Kashi 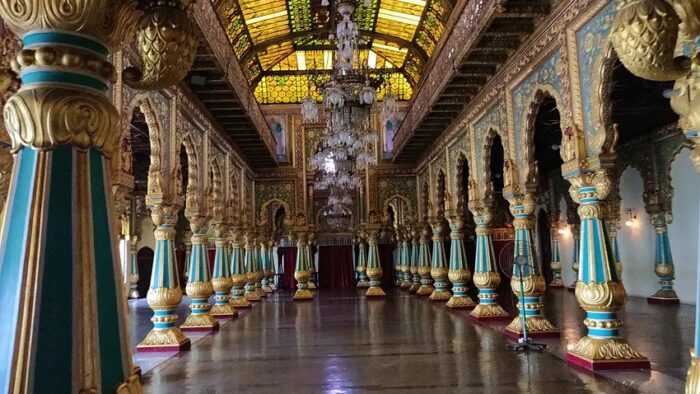 Once in Kashi, there was a theatrical performance arranged. The Queen & the entire kingdom participated. A character in the Play was to be a little princess. They had a casting issue. The queen had a son (not a daughter). She suggested that her son be dressed up as a princess. People around did a fantastic job in dressing up the Prince as a Princess. He looked so pretty that the royal painter painted a portrait. That portrait was framed, with the proper date and caption “Princess of Kashi”. The play turned out to be very successful.

A few years passed. Prince grew in age. He was performing all the princely activities (Horse riding, archery, learning combat, learning all the royal skills of politics & economics) to get ready to be a King. One day, on a lazy afternoon, Prince was looking for something. His search led him to the basement of the palace, where material not used for long was dumped. Prince stumbled upon that very painting. He read the caption “Princess of Kashi”. Prince could not take his eyes away from the painting. He was totally bowled over by the little girl’s beauty. He saw the date too and did some mental math. According to him, the Princess would have been of the same age as him, now.

The portrait and the beauty of the princess stayed with him. Days passed, the entire kingdom noticed, the prince was not his usual self. He would not concentrate on his classes. He would not pay attention to his royal chores. Such was the distraction that it got the King & Queen worried. The King summoned his smartest Ministers.

The elderly Mantriji duly agreed to his King. Mantri-ji met Prince and he asked, “Son, my experience tells me, something is eating your mind. Something is bothering you. Tell me, what’s the problem?”

Prince hesitated and said, “I think I am in love.”

Mantri-ji was relieved. He said, happily, “What, tell me who she is? We shall announce it to everybody. First I will tell the King and Queen. We will arrange a grand wedding ceremony for you.” Before Mantriji could go on, the Prince interrupted him, “But Sir, I don’t know where she is.”

“What, then how do you know, you love her?” he asked gently.

“I have seen her picture,” Prince replied.

“I would like to see her picture too. Can you please show me?” he asked.

Prince nodded and led Mantri-ji to the basement.

After taking a few steps in, he showed him the picture with the caption “Princess of Kashi”.

Mantri-ji looked at the picture with surprise.

Mantriji wanted to confirm that this was the “Princess” who Prince was in love with.

“Is this the Girl you are in love with and you want to Marry?” he asked.

Prince’s answer was emphatic, “Yes, Mantri-ji, she is!”

“Son, we need to talk about this. Please join me at the Court.” Mantri-ji sounded very concerned. He took the prince to the Court Hall, above the basement.

Very gently, Mantri-ji said, “Son, listen to me carefully. There is no ‘Princess of Kashi’.”

“What?” he asked, visibly distraught and angry.

“Sit down, let me explain. Years back there was a theatre performance. Where our Queen (your mother) had dressed you as a princess. That picture is of you,” Mantri-ji explained patiently.

“Are you serious, Sir? All this while, I was deeply in love with myself?” he asked, with a chuckle.

They both had a hearty laugh.

The moment the prince heard of the truth, the desire for the Princess of Kashi in his heart disappeared. He realised that he alone is that girl in the painting! He wondered. Why did the desire go away? Is it because he married her? No. Did it go away because he realized there was no way he could marry her? No. The Prince realized. It went away because he realised that there was no such girl, apart from him. The girl in the picture and he himself were one and the same.

[The Prince realised that the duality of him & the Princess was only ignorance and not reality. There are no two different individuals, two different beings. The illusion was caused by his not knowing, was because of the darkness of ignorance. This universe is our ‘Princess of Kashi’. When we realise “Brahma”, we realise there is nothing in this universe apart from us. We are one with everything that exists & ever will exist – Editor].