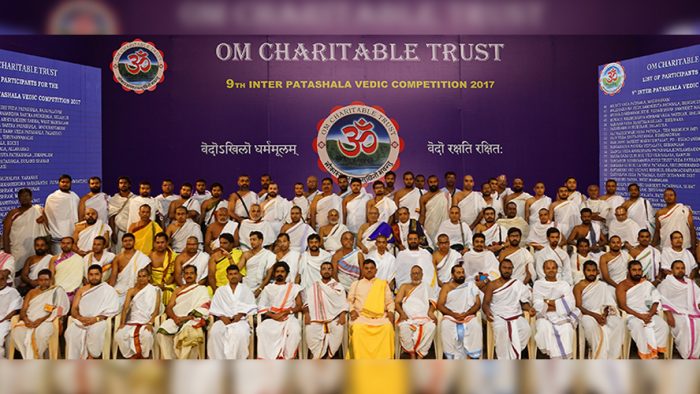 “Veda is the root of Dharma. Next the tradition and the virtuous conduct of those who know the (Veda further), also the customs of holy men, and (finally) self-satisfaction (Atmana santushti).”

A group of dharmikas from Chennai are working passionately towards establishing an ecosystem that encourages the study of Vedas and honors Vedic scholars.

Vedabhyasa – Study of the Vedic body of knowledge

The Vedas form the wellspring that has been nourishing and sustaining sanatana dharma from time immemorial. The divinity and strength one manifests by its study and rigor has helped the followers to sustain Dharma over 1000s of years.  As told by the great guru Sri Chandrasekhara Saraswati Mahaswamy of Kanchi Kamakoti Peetham, it is only because of continuous flow of Vedic knowledge and ongoing Vedabhyasa, even in this kaliyuga, bharatadesha is being regularly blessed by the arrival of great sages and gurus like Sri Sankaracharya who have been uplifting the sanatana dharma and making it possible for all of us to be still blessed by this great spiritual inheritance. He also emphasized for this very basic reason, the need to sustain this knowledge by encouraging the Vedabhyasa and also creating an environment where those studying Vedas are motivated to continue this noble activity.

Even though the destruction of the traditional Indic way of gurukula system has affected the Vedabhyasa to a great extent over the last 200 years, due to the blessings of great sages who have sacrificed their tapo phala for the benefit of this sacred land, Vedabhyasa has found sustenance and has survived this onslaught of secular education. Many noble souls have tirelessly worked and made great personal sacrifices to make sure Veda Pathashalas are still running and producing knowledgeable Veda panditas.

A lot of effort has been made in conserving the Vedic stream by sustaining vedic schools. However, not much has been done in the area of creating an ecosystem that nurtures these students of Vedic schools and encourages them to be competitive in the pursuit of these studies. Such an ecosystem would go along way in encouraging students to vigorously pursue their vedic studies.

A few years ago, a few like-minded friends and staunch followers of sanatana dharma from Chennai wanted to do something that can contribute to the holy cause of Vedabhyasa. By divine grace, their attention fell on this gap that currently exists in the area of creating an ecosystem that is conducive to and encouraging of Vedabhyasa. That is how Om Charitable Trust (http://www.omcharitabletrust.com) was formed. Since 2009, the Trust has been passionately working on various activities that contribute to nurturing this ecosystem. Below are the important activities the trust has taken up in the last 9 years:

Competitive forums like the International Science Olympiad where students can benchmark themselves and challenge themselves against their peers are a valuable means of instilling keen interest in any field of study. Students of Vedic studies badly lack such forums that promote meritocracy and instill a sense of confidence in these students. Om Charitable Trust has taken up this cause of creating such a forum and has been organizing an Inter-pathashala vedic competition since 2009. 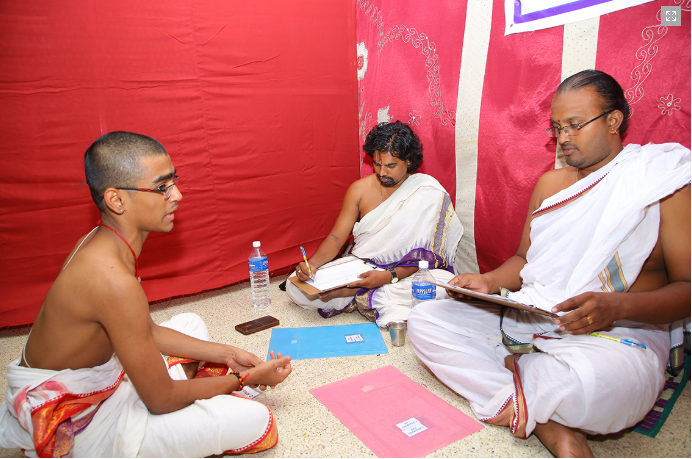 The competition was started in 2009 with around 150 participants and has now evolved into a huge event with 1200 students participating this year not only from all over India but also Nepal. The competition is conducted in two stages, with stage one being  conducted at respective pathashalas by the experts sent to these Pathashalas by the trust. The selected students from stage 1 are then invited to the stage 2 event that is held at Chennai. Students from all the branches of ruk, yajur, sama and atharva Vedas are classified in to 19 sections based on their branch of study and level of completion. Students are ranked and awarded for top 4 slots and the other students with above 60% score are given consolation prizes. The whole event is conducted with expert guidance from a team of senior vedic scholars headed by mahamahopadhyaya brahmasree Krishnamurthy Sastry, retired principle of Madras Sanskrit College. 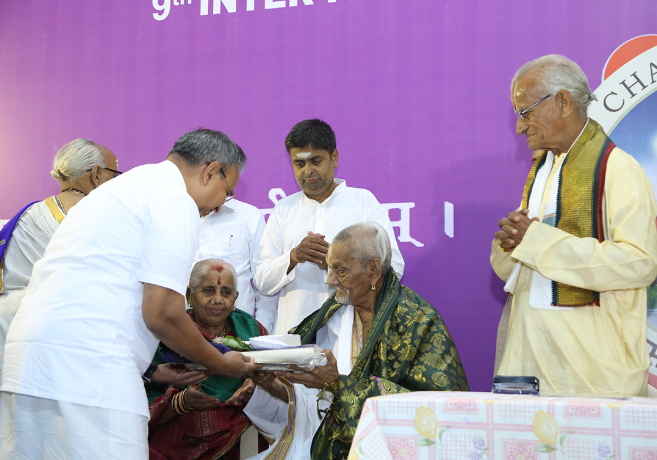 Honoring of Veda panditas and acknowledging their contributions to the sustaining of sanAtana dharma is duty of highest importance prescribed for every follower of sanatana dharma. This is well evidenced in Mahabharata as demonstrated by none other than Bhagwan Sri Krishna himself. During the Rajasuya yaga performed by Yudhishtira, when Bhagwan Sri Krishna was given the charge of assigning duties to the various folks in the organizing team, he took it to himself the responsibility of performing Padapuja to Vedapanditas.

Om Charitable Trust has taken up the task of upholding this culture of honoring the Vedapanditas. The organizers of the competition have ensured honoring of hundreds of Vedapanditas every year by performing padapuja in the very presence of Vedic students.

The trust has been providing financial assistance to the students and others involved in the study of Vedic and heritage studies. Few of the activities are: 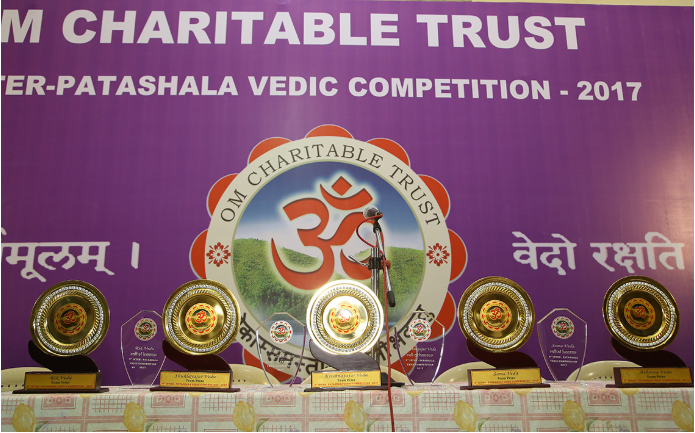 The 10th Inter pathashala Vedic competition has been announced earlier this year (Full details here. The first stage of evaluation was conducted during March – April 2018. 1200+ students from all over India and Nepal had  enrolled for the first stage. Around 350 of them made  it to the second stage of the competition that will be held in Chennai during 19th – 22nd July 2018. This will be a massive event with 350+ vedic students, 100+ Veda panditas and significant number of sanatana dharma followers attending. Apart from the enormous human effort required in organizing the whole event, the trust will need huge amount of money that goes into:

Om Charitable Trust is soliciting help from like minded sanatana dharma followers for making this event a success.

How can you help?

Here is an opportunity to be part of a great effort aimed at contributing to the sustaining of Vedabhyasa and producing bright Vedic scholars for the benefit of society. Om Charitable Trust is happy to have volunteers across India who can help facilitate this event by spreading greater awareness among the Vedic schools and teachers in their area. There is an aim to conduct this event at multiple levels – like doing similar events across all regional levels and then bringing the winners to a national level competition. If you are willing to facilitate such events, you can contact the trust at the email address: omcharitabletrust@gmail.com

There is also a need for having sufficient amount of funds to make all this happen and you can also contribute to this by making a donation. Donations to the trust are exempted under section 80 G of the Income-tax Act. This entitles donors to claim 50% of their donation as a deduction against the taxable income earned in the financial year. Indic Activists Network through Indic Academy has facilitated Rs. Seven Lakh as donations and is looking to raise additional Rs. Three Lakh through crowd funding. We request readers to make donations directly at below information.

Donations are accepted by way of cheques, credit cards, debit cards and NEFT. Donors can also click the following URL for making donations:

More details on how to make a donation can be found at: