George Floyd: The Concept of Ahimsa and Satya in Indian Thought 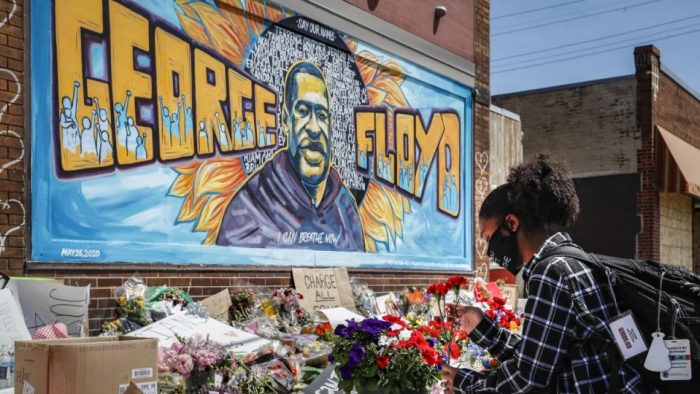 The US and other countries are flaring up to the ‘Black Lives Matter’ protests following viral footage of a white police officer killing a Black man, George Floyd, in Minneapolis by kneeling on his neck. The reckoning on race and brutality has again brought our attention to the nature of the world we live in, and how we live in it. A few of us in Ritambhara engaged in a dialogue to explore the question more deeply.

Raghu: I quite interested to understand how this incident is playing on our minds- in terms of our associations, questions on the world we have created, and how we live in such a world.

Participant: My first reaction is ‘how can one human exert such violence on a fellow human being?’ This question is making me feel very overwhelmed. But from a personal point of view, as an Indian liberal living in the US, I am engaged with other liberal groups in understanding the links between caste and racism. The issues of caste superiority and the subsequent oppression in Indian society makes me uncomfortable.

Participant: Having lived in the US for 9 years as a student and then as a working professional, my being is divided into three parts. One, I used to work closely with Black and Latin communities for my work in the study of education. There I saw how impoverished these communities were, subject to constant assault or violence (big or small), and yet they possessed a sense of resilience to fight back.

Secondly, I saw some members of the white community, like my professors, carrying self-hate, anger, and shame. Lastly, as part of the Indian diaspora, I saw how my community contributed to the violence by identifying with the white community as the ‘power center’. Now after all these years of being in India, practicing yoga and inquiring, I am currently feeling a sense of helplessness. I do not see dharma here at all! What can we do to move ahead?

Participant: Even though I have never lived in the US, I have heard many narratives about the Black community being quite poor and a center for many crimes, violence, etc. That did scare me and after seeing the Floyd incident, I realized that there are many such brutalities that happen all the time in the US, but we hardly hear of any sitting in India. I am in touch with the issue of the colonizer and colonized, whether Africans, Indians, or South Americans.

It seems nothing has changed after the rule of the white man has ended (so to speak). I am also seeing a stir here where people are voicing out their protests against Brahmins, Savarna Hindus, and drawing similarities between race and caste violence. I see the atrocities committed with respect to caste. But, I am not willing to beat myself for being a Brahmin/Hindu, and not take the blame for all the wrongdoings. I am not sure if it is ok to compare ‘Muslims lives matter’ with the movement in America.

Participant: I feel very small, and out of breath when I think about the incident. I have also been at the receiving end of discrimination being dark-skinned or even height-wise for being short. I feel that I struggled and survived the hurt. But will the community or the individual cope with a constant barrage of violence?

Raghu: Right after seeing the Floyd clip the image of colonizer vs colonized came up very clearly as a symbol. Later, a friend of mine sent me a clip showing a white person saying ‘whites are more intelligent, have a right to live, etc..’ Then another guy who is interviewing him is shocked and says ‘how can you say such things?’

I have seen videos from the Black community saying ‘Black people should not ask whites to forgive because even this is a racial act’…’, or ‘Floyd had a criminal record, so he is no hero. But what the policeman did needs to be condemned.’

I feel there is a part of me in every response. One part is shocked, one part is bewildered, one part is afraid of being symbolized – either as the privileged or racially profiled.

I am also reminded of two stories-:

One, where the white settlers went to America in search of new land. They were seeking freedom from religious oppression. They were welcomed by the natives who offered food, shelter, knowledge about growing food crops in the “Turtle Island”- as they called their land. Thereafter, the natives were killed by the same settlers a few years after signing a peace treaty. The initial contact is now remembered as Thanksgiving; the latter is conveniently forgotten.

If I think further, all this happened at a time when Colonization was rampant. Ideas of racial superiority and religious mandate were used to justify the horrors. We need to examine how the more Asuric tendencies of man have been justified and celebrated by using race, religion, and nationality.

The second is a contrasting story literally from the other side of the globe. The Parsis arrived in India at Navsari seeking asylum from the Muslim conquest of Persia about 1000 years before the Pilgrim Fathers arrived in America. The King of Gujarat sent a bowl full of milk to the Parsis indicating that the land is already full, there isn’t space for a new group.

The Parsi leader takes some sugar and dissolves it in the milk suggesting that ‘we will dissolve in the land without disturbing you.’ He sends the bowl back and the Gujarati king welcomes them in. The manner in which the Parsis have integrated in India is truly symbolized by this story.

Now let’s examine both the stories-:

In both cases, the native response was quite humane. The European settlers go on to say that if you are different from me you have no right to live and I have all the right to grab your land. I will kill you unless you conform to my rules and beliefs.

The Indian responses (both from Bharat and from the Turtle Island) are clearly saying that there is plenty, and we can share. There is more than one truth. We can live in this space, follow our practices. Let’s agree on the rules regarding how we interact. The foremost rule in interaction is ahimsa. This way we have respect for each other and create space for each of us to live in our own ways.

These stories are illustrating two ways of dealing with differences, two kinds of ‘othering’.
1. Un-livability – ‘If you (the other) are different then you have no right to exist except on my terms.’ This is the makeup of a colonizing mind.
2. Distancing – ‘You (the other) can be because there is more than one way to live and we will share the space.’

Let’s examine this hypothesis and see where it takes us.

Participant: But I feel that the violence towards the Black community is a little different from the colonizer-colonized. The oppression of Dalits, labour and other castes in India is still continuing and is just as terrible as what the colonizer did.

Raghu: We need to examine this parallel very carefully. At a human level yes, violence against human being for being ‘different’ is not justified. Period. The crimes against the other caste members are no doubt horrific but the underlying structural process is not the same as the racial crimes.

Looking at the Indian violence with the same lens as the American crimes mean we ignore the underlying structural process. Without that understanding, our response will be futile.

The Indian way of ‘othering’ is by creating a distance through upeksha (mentioned in many Buddhist, Jain, and Hindu texts). If I do not agree with something then I withdraw or create a distance. In the Parsi example, it was very clear: ‘I am not participating in your truth but all that we have to do is to work out the interface between us so that I can live my truth and you can live yours.’

In the European-Abrahamic frame, there is only one possibility: ‘I live on my terms and you have to live my terms or you perish.’ The form of violence this othering takes is obvious and very different.

Participant: So, what is the Indian form of violence?

Raghu: As resources become scarce, the Indian form of ‘othering’ transitions through what I see as three stages of violence:

1. Discrimination- I engage with the other selectively based on a framework of privilege.
2. Deprivation: Each of us hoards resources, and becomes miserly in transactions with the ‘other’.
3. Denial- I refuse to collaborate with you. The extreme form of such denial is untouchability.

I think this approach, one of distancing to the ‘other’, is influenced by the geography of abundance. In my limited understanding, the Native Americans, Indians, Africans, and so on practiced various levels of distancing and sharing. The ‘other’ is different but as long as my niche is not threatened, both can live.

The European mind emerged in a desert geography, an environment of scarcity. This promotes the notion of the ‘other’ as an enemy/ alien: there is no sharing and no space for the ‘other’ in my niche. If I do not make enough money or save up I will die in the harsh winter.

Participant: Doesn’t distancing come from a sense of paranoia, which is also true in western societies where say Blacks or Asians live in separate neighborhoods etc.?

Raghu: Yes, it can. When distance is not complemented by respect, it can become fear of the other. Then no meeting is possible except through violence.

Participant: So how can interfaces between different people work?

Raghu: The starting premise is that there is enough for everyone. You are free to live in your own way and I in my way, so we are both secure to start with. There are spaces where we can exchange things but there are some rules of exchange, which are captured in the Yoga Sutras as yama-niyama.

That is, the interface needs to have a certain quality, for example, it must be based on ahimsa and satya to begin with.

Look at the Satyagraha of Gandhi ji. He took forward Tilak’s assertion “svaraj is my birth-right”. However, he neither let the British cross the boundaries he set nor did he disrespect them for who they were.

Participant: Does the distancing lead to more isolation and a focus on individuality? Where is the space for community development or the collective?

Raghu: I don’t think so. Since there is respect, and in the best case there is trust and even friendship, there can be learning. Indeed, there has been in the Indic tradition. Peace and mutuality have been more dominant than the war in our subcontinent till the Muslim invasions.

Different spiritual traditions have continued practice of debate and dialogue for hundreds of years and learned from each other. I know so many beautiful stories of mutual respect between communities, families of different religious persuasions, and so on.

Participant: I understand there are two approaches to ‘othering’ but is there a third of not being separate at all. Because I feel discrimination will lead to some kind of violence or further divide too.

Raghu: Race, language, or color of the skin are realities you cannot wish away. That is obvious, however, the difference can lead to respect and curiosity, it does not have to lead to suspicion and animosity.

So we have to understand what interfaces foster respect and healthy curiosity.

Raghu Ananthanarayanan is a post graduate from IIT Madras who has focused on human behavior. He brings together his Yoga Sadhana and understanding of technologicalRead more