Excerpts from Aditi Banerjee’s Latest Book ‘The Curse of Gandhari’ 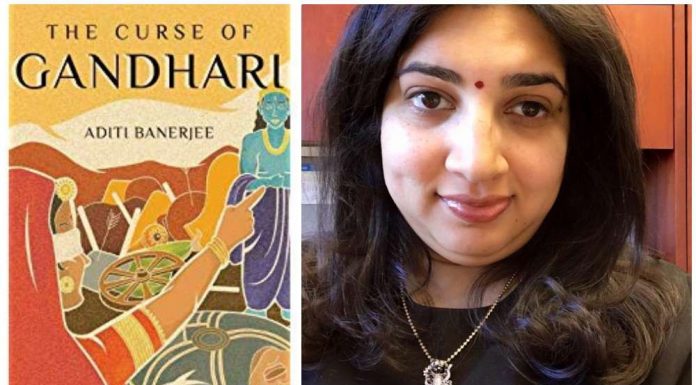 Recently launched ‘The Curse of Gandhari’, by author Aditi Banerjee is gaining popularity. With reviews and mentions in several Must Reads and Recommendations, ‘The Curse of Gandhari’ is winning accolades.  It was an Editor’s Pick for October by Writersmelon. It was one of the Festive Must Reads on Mahabharata recommended by the Financial Express .

“What I love about Gandhari is that she is not a conventional heroine. She shows anger and bitterness on occasion and does not meekly accept her fate. She exerts power and agency over her life in different ways, as constrained as her circumstances were… (The) incredible strength and complexity of her persona is what drew me… What was the meaning (of her blindfold)? Was it the sign of a devoted wife, a rebellious act of spite or a metaphorical blinding and hiding away of herself from the realities of life? Or perhaps something more enigmatic that we are not meant to analyse but simply behold with awe and respect as an incredible act of sacrifice.”, says Banerjee.

Here’s a small excerpt from the bestseller.

Gandhari woke up on the forest floor, and the first thing she tried to do was quieten her hunger. It had been over a year since she had eaten food. She told her stomach to behave itself. She knew it would obey her. She touched the earth beneath her. Her first prayer was to the earth for bearing her weight and the weight of all the humans who trampled upon her and destroyed her. Her fingers brushed against the straw pallet carpeted with leaves that served as her bed. She preferred the bare earth, but the men in the hermitage denied her that austerity, seeing in her still the queen she no longer was.

This is how she oriented herself in the world every morning since the day she had blindfolded herself, the day she could no longer see. I am in the forest ashram of Veda Vyasa, fifteen lengths of a bow from the river. She tested herself. Yes, now she could hear it: the chants of the yogis finishing their morning prayers; the hiss of oblations being poured into the sacrificial fire, the murmur of water being poured into clay pots for cooking the day’s meals.

Listen more closely. What is different today? What is missing?

The wind. The wind had fallen silent in the trees looming above her. So many nights, for years, she had lain on this forest floor, blindfolded and bored, counting the leaves by their individual sounds as they rustled through the wind, numbering them, leaf by leaf, high above her where the topmost branches of this giant canopy of trees met and mingled. She counted them as she had once counted the lives lost in the great war.

Eighteen million leaves, that’s how far she had counted. How long it had taken to count to that number, how many nights spent awake in this forest, an insomniac. But there had been even more lives lost, lost by her, because of her. That unsettled her. She stopped counting then. She was afraid that if she counted more, if she counted all the leaves in the forest, it still would not add up to the number of lives lost on her account. Just the thought of the war that had cost her all her sons, all her kin, the kingdom that should have been her sons’ – stirred up the dormant anger, the fury.

Focus. What else do you hear? What else is missing?

The insects had fallen silent too. The forest that had always hummed and vibrated as termites gnawed through trees, as cicadas hissed, as innumerable creatures feasted on sap and pollen and rotting vegetation – it had become deathly still, as quiet as a cave. It was then that she started to worry. She touched her face, pressed her palms over her eyes, warming them through the coarse white bandage. Her gnarled fingers combed through her hair. This, and the splashes of water across her body in the cold river where she would now go to collect water, would be her only grooming for the day.

Once upon a time, it had taken several hours and two serving girls simply to dress her hair for the day. They would waft the smoke of sambhrani incense through her tresses and thread gems and flowers into the strands of her long hair, as straight and strong as black iron. She had always insisted on tying the bandage herself. She would screw her eyes shut as her deft fingers loosed and retied the bandage after her wash so that there was no chance of inadvertently casting her eyes on the world.

She had spent years cultivating her physique, smoothing her skin with creams and scrubs that stung her sensitive eyes. She had learnt to drape her dresses at an angle that made her appear taller, to suggest the dip of a waist where there was none. She had sketched elaborate coiffures for her hair, wreathes of braids, cascades of curls like a carefully sculpted waterfall, artful scatterings of pins and shells. Her hair was so heavy when tied up that her neck hurt, but she practiced her gait, the soft, measured tread, the slight elephant-like sway to her hips, the butterfly fluttering movements of her hands. She did this not out of vanity but with the miserly fastidiousness of a merchant hoarding his wealth, carefully investing and growing it.

Beauty was one of the few assets young princesses had. She wondered how grey her hair had become now. She rose from her makeshift bed and listened to her own measured tread, the deliberate footfall as she picked her way down to the river. The others had taken to being barefoot but she wore bark sandals to keep her feet clean and supple. They thought it an indulgence perhaps, the act of a spoiled queen. But she needed to be surefooted.

She was determined that no one think her weak, that the only sign of her self-imposed infirmity be that white strip of cloth bound elegantly across her eyes. She was adamant in each step to not trip over a pebble or bump into an unexpected tree. In the beginning, it had taken her two hours to walk that little distance to the river, one slow step at a time, so careful was she not to err. The young boys studying in the ashram had taken pity on her and marked the path from the river to the ashram with spiked posts and a rope hanging between them that she could hold as she walked.

She knelt at the edge of the river, and despite her best efforts, it was an ungainly movement as she lowered herself onto her creaky knees on the pebble-strewn ground. The sharp wind pierced her belly like daggers under her thin, pale yellow cotton sari. The wind invaded her body, clawing at her throat and stinging her eyes through the bandage. Her hands trembled, spilling water from the copper vessel she filled for her husband.

What kind of cold is this? This is the not the cold of winter.

She leaned over the surface of the water to wash her face. As she was about to dip her hands into the icy water, a blast of cold air pushed against her from beneath the water and her eyes flew open beneath the bandage. She could not see; but she saw now. She saw the broad surface of the river frozen white, rippled with stiff waves stuck in mid-motion. Her death was etched across that blank white mirror of the river. There was no lettering, no image, no vision, yet she saw it with certainty, as if the guardian spirits of the water had whispered this to her:

Gandhari, it is time for you to die!

They did not seem particularly disturbed at the prospect. Why should they be? She was an old woman now. She rose and made her way back to the ashram. The wind clung to her, clasped her behind the neck, played with her hair. It would not let her go. She wrapped her sari around her more tightly but the wind was relentless. It mocked her, howling against her skin. The way back was slow. She gripped the rope a little too tightly, fraying her skin against its rough knots. I am going to die¸ I am going to die, she told herself with every step. A sickly dread settled in her stomach.

To purchase a copy for yourself to read further-