Despoiled Gaṅgā as a Metaphor for Loss of Hindu Discernment 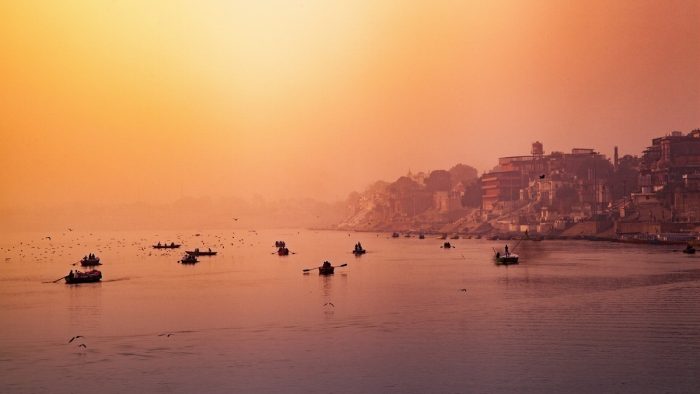 With the river Sarasvati going dry the plains watered by the Gaṅgā became the focus of civilization in India. This civilizational phenomenon is philologically mirrored in Hindu tradition with the Gaṅgā and cities along its course gaining prominence in the late Vedic period.

The great historical empires that brought about the multi-step unification of India can all be seen as having their “birth” on the banks of the Gaṅgā.

So much so that even in deep south India the conqueror Rājarāja of the Coĺa clan established a town to commemorate his bringing of water from the Gaṅgā in the course of his conquests that reached the Gangetic plains.

Indeed, the Gaṅgā is typically associated with everything pure and auspicious in Hindu tradition.

However, we shall note one interesting departure from this where Gaṅgā is presented as a negative example. We see this in the Nītiśataka, one of the triads of 100 verse-collections, composed by Bhartṛhari, a personage who is the locus of many a colorful legend in Hindu tradition. 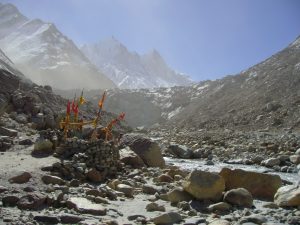 A small shrine at Gaumukh, Gangotri glacier, near the source of the Ganga

The other two of the triad being the Śṛṅgāraśataka and the Vairāgyaśataka, which respectively cover the opposites of eroticism and asceticism respectively.

The verse we are talking about is:

She falls from the heavens on Śarva’s head, from his head to the Himalayas,
from the Himalayan heights to the plains, and then from the plains to the ocean;
thus Gaṅgā has gradually attained a lower and lower status;
even so, the fall of those deprived of discernment is a hundredfold.

Here the descent of Gaṅgā from the heavens all the way to the ocean is presented as mimicking the manifold fall of those who have lost their discernment.

Sadly, the Gaṅgā we see today literally gets worse in the course of its descent: from its pristine glacial origins, the river is serially polluted by everything from corpses to industrial effluents as it passes through the civilizational centers on its mid-course to its delta in the Vaṅga country. This grimly polluted Gaṅgā of today is truly apposite to old Bhartṛhari’s metaphor.

We would even go as far as to say that this despoiled Gaṅgā is a key manifestation of the manifold dissipations of the Hindus arising from the loss of discernment, which was once abundant in the founders of their nation.

Sacred geography is an important aspect of a heathen civilization.

Hindus as the most expansive heathens in the modern world should be taking the lead in preserving the basis of what makes a particular geography sacred. Yet, barring few bright spots like the Prabhughat cleaning drive [Footnote 1], what we are faced with most commonly is not just a dreadful neglect but even a willful desecration of sacred geography.

On another front, Hindus face the possibility of being consigned to perdition due to their rank inability to wield nīti (politics) to their advantage.

But the lack of discernment among the Hindus is nowhere more apparent than in the matter which can be termed as “self versus non-self” discrimination.

The key to the survival of a nation, civilization, and culture is its ability to define itself in a sturdy fashion. However, an examination of the Hindu responses suggests that they have been struggling with this.

Sometimes we see Hindus placing emphasis on autochthonism, which in certain cases extends to include racial or genetic identity. Other times we see them mouthing the famous adage “vasudhaivakuṭuṃbakam (the world is one family)”, without realizing that early Hindu tradition frequently recorded this statement as a negative example [Footnote 2].

Irrespective of their intrinsic merit, neither of these models of identity providers for robust discernment of what is self and what is non-self. In fact, both models open the door for the invasive Abrahamisms and their secular derivatives such as leftism and liberalism.

It hardly needs elaboration that giving these ideologies the proverbial inch will result in them grabbing an ell and much more at the expense of the Hindu.

Thus, even as the immune system of an organism has manifold receptors to distinguish invasive material from self-substances, we need to develop the civilizational apparatus that can finely discriminate that which can be accommodated within our heathen framework from that which cannot be. 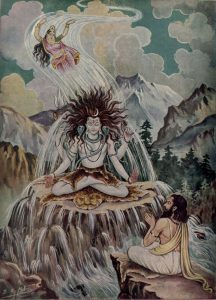 Pictorial depiction of Shiva stopping the Ganga in his matted locks.

Hence, if we intend to survive we need to collectively awaken to the big “if” in the statement of Monier-Williams, however harsh it might feel:

“The knowledge of human nature displayed by the [Hindu] authors, the shrewd advice they often give, and the censure they pass on human frailties – often in pointed, vigorous, and epigrammatic language – attest to an amount of wisdom which, if it had been exhibited in practice, would have raised the Hindus to a high position among the nations of the earth.”[Emphasis mine]