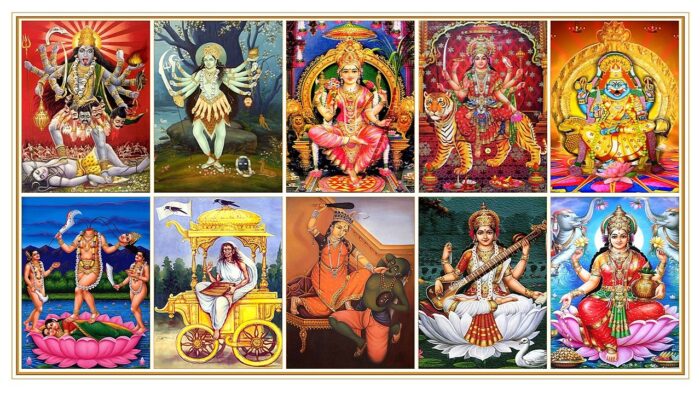 Perhaps the most intriguing and esoteric manifestation of different forms of the Goddess are the ten Mahavidya-s, who hold a preeminent position of great practical prominence in the Shakta traditions particularly of North India. Though it is believed that they emerged at a much later date, some of the Mahavidyas have acquired tremendous prominence as individual deities and have elaborate worship methodology and dedicated traditions centered around them. It is possible that the rivalry between Vaishnavas and Shaktas, especially in Eastern India, gave rise to these 10 forms as equivalent to the 10 avataras of Vishnu. Whatever be the root cause, soon these fantastic wisdom-goddesses climbed in the ladder of popularity and became firmly integrated into Shakta theology and practice. Their Tantric sadhana and application became widespread across North India, both in established paramparas as well as through colloquial sabar tantras.

The most common list of these 10 Mahavidyas are as follows: Kali, Tara, Sodashi, Bhuvaneshwari, Bhairavi, Chinnamasta, Dhoomavati Bagalamukhi, Matangi, and Kamala. However, this is not the final or fixed progression because certain traditions do have variations in the number and placement of the Mahavidyas.

In principle, while it is accepted that the energy of the Mahashakti is infinite and quite beyond human comprehension, yet for the purpose of streamlining Tantric sadhanas, these 10 cardinal forms were visualized and sadhanas appropriate for experiencing them were created. Some of the Puranas and Tantras mention Sodashi as Tripursundari. Also, in certain Tantras and sampradaya-s we find a different list of Mahavidyas, which may sometimes contain up to 24 names, or 18 (Niruttara Tantra), or 13 as in the case of the Devi Bhagavata. The Mundamala Tantra also provides a list that exceeds the 10 Mahavidyas. In some instances the Goddesses were further classified into Mahavidyas, Siddhavidyas, upavidya and vidyas. An oft quoted sloka on Mahavidyas says:

Another school of thought believes that there were originally just 3 great Mahavidyas – Kali, Tara, and Tripursundari – before the list was expanded to include ten.  However, in all instances of Mahavidya literature we find Kali as the Adya Shakti from whom all the rest were projected out. Eventually, in the course of time this tradition crystallized around the dasa Mahavidyas including later Tantric/Shakta declarations in texts like Guhyatiguhya Tantra that these are the root energies from whom the Avataras of Vishnu were created.

The Todala Tantra says Bagalamukhi relates to Kurma Avatara, Dhoomavati to Varaha, Chinnamasta to Narasimha, Bhuvaneshwari to Vamana, Parashurama to Tripura, Matangi to Rama, Bhairavi to Balarama, Mahalakshmi to Buddha, Kali to Krshna and Durga to Kalki avatara. While Tara relates to the blue form.

But the Mundamala Tantra gives a different correlation between Mahavidyas and Avataras.

Which translates to the following scheme:

Similarly, and of greater practical use, is the correspondence of Mahavidyas and their representation through the grahas of Jyotisha. This knowledge is useful even today for removing or mollifying certain negative and particularly troublesome planetary combinations in horoscopes.

The most commonly accepted relation between Mahavidyas and Grahas are as follows:

In many shakti peethas across North India, especially in Tantric temples like Kamakhya, serious graha afflictions are countered using rituals performed inside the cave-temples meant for the appropriate Mahavidya. In this context, it is proper to mention that while Mahavidyas can be worshiped for negating serious graha doshas, a Mahavidya per se is a much higher and powerful than any of the grahas and in itself can constitute a path to wisdom and liberation.

With time each of the Mahavidyas developed its own cult, but not all of them could attain to the same state of ascendancy, popularity and power as Kali, Tara and  Sodashi did. Kali was always a popular form of the Goddess both inside and outside the Mahavidya tradition. Due to the strong influence of Baudha Tantra in Eastern India particularly during the Pala era, and a general iconographic similarity between Ugratara and Kali, the worship of Tara quickly spread through across the Tantric circles from Bihar to Bangladesh. Sodashi, in the Mahavidya tradition, took over a more aggressive and vamacari form. Some believe, for example, that Kamakhya is essentially Tripursundari. So is the goddess in the state of Tripura where Sodashi appears in a form similar to Kali and her worship entails ritual sacrifices, which are an important part of the Vamacari Mahavidya tradition.

Kamala, probably one of the tamer deities in the tradition, eventually became regarded as a Tantric version of Lakshmi, worshiped for wealth, prosperity and well-being; while Bagalamukhi became the goddess capable of destroying enemies and winning court cases. Chinnamasta worship remained less popular among Hindu,s but resurfaced in massively in Tibet in the form of Vajravairochani. Dhoomavati, on the other hand, has remained a fringe Mahavidya goddess, worshiped occasionally by some individuals, but never attained any particular popularity among Tantra sadhaks anywhere. Moreover given the predominance of Mahavidya tradition in the North where Kali-Kula was the main variant of Shaktism, Kali, Tara, Chinnamasta,  Sodashi (in Her Kalikula form) and Bagalamukhi worship certainly remains the most easily worshiped forms both by the common people and the initiated Tantrics.

In this context, it is appropriate to mention that while Shakti puja through the 52 peethas is a long standing tradition in India, where the Mahavidya tradition differs is its exceptional thrust on Tantra, where mantras, mudras, yantras and specifics of the sadhana, and its application as power, for appropriate causes, in the world around is vitally important. The Tantric path is best described as a new approach to the Vedantic realizations, but without the ritual corpus from the Vedas. Instead it has its own methods and processes, particularly in the Mahavidya tradition. Some scholars in the last century have tried hard to find similarities between or trace the origins of these Goddesses into Vedic texts, but those are mostly labored adventures of speculation rather than a straight connection.

In the next parts we will take a closer look at some of the individual Mahavidyas and their history, worship and the current practical state of worship in this tradition.