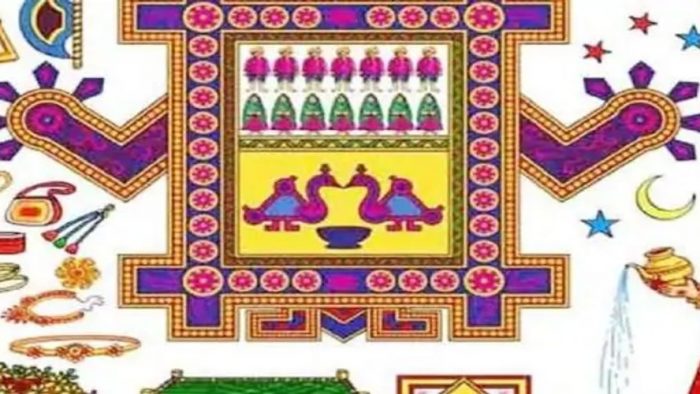 Karthik Maas Krishna Ashtami is celebrated as Ahoi Ashtami vrat across UP, Uttaranchal, and Haryana. This is a festival which comes in series after Navratri, Dusshera, Sharad Poornima, and Karwachauth and before Diwali.

Fasting: Mothers observe nirjala(sans water) fast, and offer their puja to Maa Ahoi, who is Goddess Gauri. The fast is traditionally observed for longevity and health of male children. However, women these days observe it for their children regardless of their gender.

Story Narration: In the evening, a story is narrated by the eldest woman in the family, while the story is being told and listened to, one has to also compulsorily hold rice grains in hands and utter the sounds of “hmm” as a sign of attentiveness!

Offerings: Post the story narration, water is offered to the stars/moon (as per family traditions), Athavari bhog is offered to Maa and to all the characters in the painting. A new cloth(usually a sari) is used to hide the painting and Maa during the bhog (this is done to deceive the syahu, into believing that no significant festivities are occurring at this place to ward her off). The sari is given to the sister-in-law, and puas are distributed to the kids. Then comes the best part, all the kids are asked to make a lot of noise and bang on the doors to let everyone know that this house is full of kids and their laughter!

Painting: A small panel of either puja ghar or kitchen wall is painted with terracotta, which acts as a base to draw the story related to the festival. The story is drawn using rice paste (made by soaking rice overnight and then grounding it). The painting depicts 7 brothers and their wives, a potter woman, syahu(porcupine) family, moon, stars, Tulsi ma, Ganga ji, Signs of Om, Swastik and names of the kids. 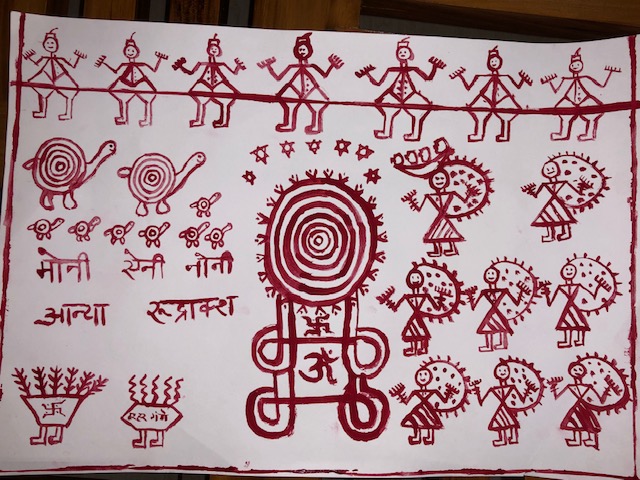 Chowki: A pooja chauki is prepared which is not removed till a day after Diwali and all upcoming Pujas will be offered here. Gauri Ma is prepared on the day of Karwachauth using mud from river banks or your own garden if it is pure and placed on the chowki . Other items include a karwa, which is one half of the pair used on karwachauth, contains water which is offered to the stars, a handiya(an earthern pot) full of water, which is sprinkled around the house post diwali and the remaining is put in children’s bath. Food offerings called Athavari (8) for Maa means 8 sweet pua or 8 sweet puris as per family traditions, also water chestnuts, radishes are offered, a sari for maa which is given to sister –in-law or Mother-in-law, and lastly handmade Syahu(porcupine) quills.

The puja chowki, here you can see quills made by using cotton and wooden sticks stuffed in the Karwa nozzle. 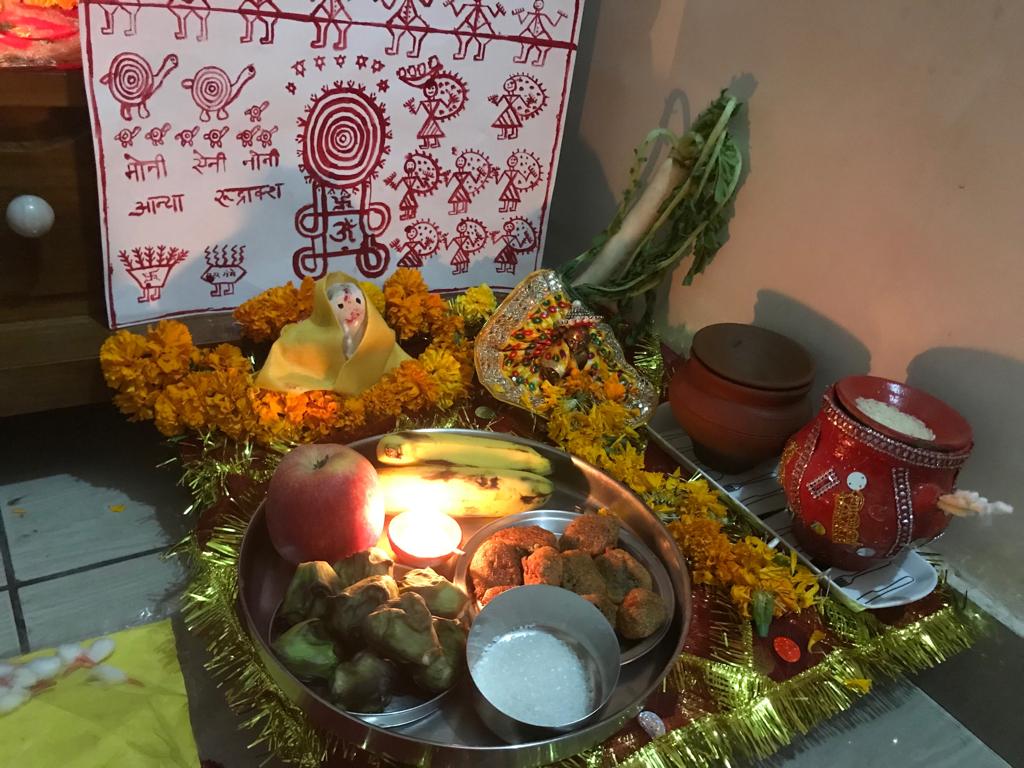 The Necklace: Another very important thing associated with this vrat is a silver necklace which is a symbol of healthy, a growing family and prosperity. It has a square locket with Syahu and her babies embossed on it and round silver beads. The beads represent children, one bead is added for each child born (traditionally male children), also for each important event in the family, like buying a house, car etc a bead is added, the longer the necklace the better, it is passed on from mother in law to the daughter in law usually, for families having more than 1 son, then it is not transferred and the daughter in law can get her own made and start afresh! 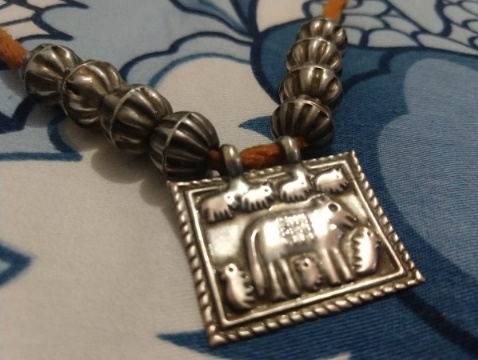 Once upon a time, a moneylender had 7 sons who lived with their 7 wives. As Diwali approached, the house was busy with the preparations. The youngest bride was given the responsibility to repair and clean the mud house.

She decided to go and fetch some mud. As she started to dig, one by one 7 times, she realized that she had killed 7 porcupine babies! Poor porcupine mother cried in pain and cursed her “I will take away all of your children”

Every year for 7 years this woman gave birth to a male child only to be taken away by Syahu on kartik krishna ashtami,!

It was the eighth year and Diwali was just around the corner, the bride was playing with her child, as her house and its surroundings were all dirty. An old lady passed by the house and felt disgusted to see the mess,and yelled at her, “O, bride, what is the matter? Why aren’t you preparing your house for Diwali? play with your child later, go first clean your house!”,

The bride cried and said “Amma, he is here for a few minutes more, after that I won’t be able to see him ever, as Syahu(porcupine) will take him away, let me play”

Amma enquired more from her and said “Arey, how can Syahu take him away like this, you just please her with your kindness and she will bless you”

Amma gave her a unique idea to trick the Syahu and win her heart. She asked her to clean the house first and to make it welcoming and then prepare delicious food

“Lay a large spread of food from main entrance to the living room” said amma “Syahu will not be able to resist the food! by the time she is inside the house, she would be full, happy and satisfied, and then you offer to oil her hair, when you are doing so, pinch your child so that he cries, when she enquires, just say, he wants your earrings (sharp quills on porcupine) to play with, do it 7 times”

Syahu as expected could not resist the food and ate to her satisfaction. She entered the house feeling all happy! As soon as the young woman saw her she said “O amma, you must be tired let me oil your hair”, Syahu readily agreed, and while the bride was at it, she pinched her child and he started crying

“Why Is the child crying, bahu?” Syahu asked

“She wants your earrings (quills) to play, ma” the Bride replied

“Oh take it, don’t make the child cry in the festive season” Syahu gave away her one earring, but the bride kept on pinching the child till she gave away 7 of her quills! And the moment she collected 7, all her children miraculously appeared! Syahu, in turn is pleased with the care and dedication of the young Bride, and in turn forgave her and lets her children live!!

In some versions of the story, it was the sister of those 7 brothers who killed the Syahu and got cursed, but the youngest bhabhi accepted her curse in order to save her sister in law’s children and rest of the story continues as above!

It is interesting to note that the vrat is observed for the male child, possibly because of him being an earning member and an heir to all the property, this is where the patriarchy seems to sweep in our matriarchal society

Secondly, the puja panel depicts so much of acceptance that was there in the society those days, Imagine worshiping a potter woman, as without them any festival is unimaginable and animals like porcupine which probably has no or least importance to the society in terms of economy, yet it is worshiped properly to show that everyone is important and equal for god! 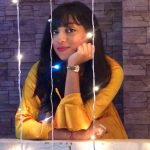 Anupriya Pandit is a marketer engaged professionally in devising strategies to build and manage brands. She loves to explore mysticism and has travelled far andRead more