Advaita And Theism: An Oft Overlooked Clarification From Ādiśaṃkara 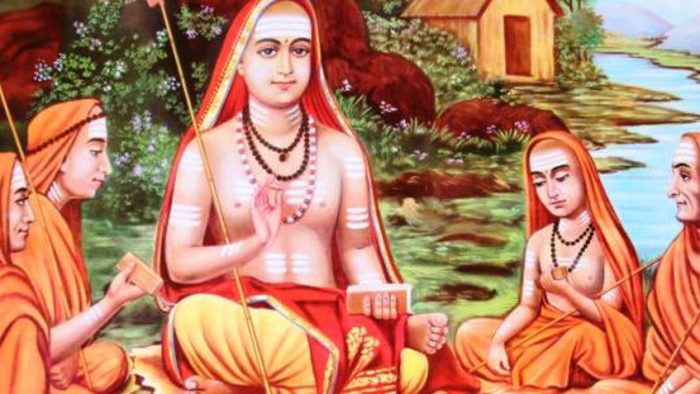 Advaitavedānta denies the absolute reality of the variegated universe perceived by the senses and characterised by space-time-causation, and declares that what is real is Brahman – the Indivisible, Infinite, Absolute; the true identity of the individual, who is but a part of that universe, will also invariably be that of Brahman.

In the light of such non-duality in which Īśvara (God) is only a relative entity-reality, and despite the fact that a student of Advaitavedānta could well do away with rituals and theistic worship to stick to vicāra (enquiry) alone as his/ her means to aparokṣānubhūti (direct realization of Nondual Truth), we find that there has not been a single important Advaita teacher that we know of, who has shunned bhakti (devotion) towards Īśvara completely; nor have we seen any of these teachers forbidding theistic worship to those who have an inclination towards it.

Contrarily, we find that all of them – be it the Advaitic saints of Mahārāṣṭra, or a Rāmakṛṣṇa Paramahaṃsa, or a Ramaṇamaharṣi – held on to a manifest form of Īśvara; none of them attempted overtly or covertly to impose a general ban on temples, idolatry or ritualistic worship, despite themselves being established in Nondual Brahman.

They saw spiritual gradations among seekers, laymen, and society at large, who need formal religion. This unmistakably has been the case since the time of Upaniṣhadic ṛṣi-s who though, likewise, were established in Brahman, were nevertheless also engaged in śrautayajña-s that appeal to the Vedic deities.

Yet, it is a fact that we very often come across arguments about the impossibility of reconciling the theistic practices of Hinduism with Advaitic precepts. In relation to this, and due to the lack of as many exact historical details about the life and works of Ādiśaṃkara as that of the Advaitin-s of recent several centuries, there have been strong claims that he totally shunned ritualistic worship in favour of intense jñānamārga, and also that the authorship of several hymns on various Hindu deities, ascribed to him is false.

Despite his clear explication of bhakti and its relevance to Vedānta in his commentary on the Bhagavadgītā, he has even been declared a pracchanabauddha (Buddhist in disguise) [1], owing to the closeness of the Ajātivāda promulgated by him with some schools of idealistic Buddhism, and thus that he was against theism.

The present essay attempts to bring to light an oft-overlooked or forgotten statement from the great master Ādiśaṃkara himself — in relation to theistic-ritualistic worship — which would tone down the vehemence of such claims. It also attempts to show that Śaṃkara was no different from recent stalwarts of Advaita towards the necessity of formal religion that sanctions theistic worship for the welfare of spiritual aspirants.

Further, this exposition is also imminent in the perilous wake of some followers of Abrahamic religions trying to equate, wrongly and without any insights, their own religion with that of the Upaniṣhad-s, which they claim presents only and only the worship of a formless God as final, and thus denigrate temples, rituals and idolatry as evil and unsanctioned by the Veda-s [2].

This purported equation easily attaches itself to Advaita than other schools of Vedānta since the latter have always followed theistic worship of some or the other deities, while Advaita emphasizes on discovering the Self through vicāra, which is intangible to the senses. Hence, an exposition on Śaṃkara’s stand towards theism becomes doubly imminent.

In his commentary on the Vedāntasūtra-s, Śaṃkara has undauntedly and thoroughly refuted the tenets of several schools of philosophy, within and without the fold of Veda-s, which stood in opposition to the doctrine of Vedānta.

In that process, while refuting the Bhāgavata school of philosophy in the commentary on the sūtra ‘utpattyasaṃbhavāt’ (Brahmasūtra 2-2-42) of the Utpattyasaṃbhavādhikaraṇa, he is dismissive of its theory of four vyūha-s – Vāsudeva, Saṅkarṣaṇa, Pradyumna & Aniruddha [3] – which ascribes an actual birth to the individual self from the Paramātman (Vāsudeva) through successive stages.

Śaṃkara’s primary contention against this, verily in accordance with Ajātivāda and the relevant Vedāntasutra, is the logical untenability of any birth being ascribed to the Self which is ever birthless.

Amidst deliberations of pure and high philosophy at this stage, we stumble upon a statement from Śaṃkara, much to the startlement of those who claim Advaitavedānta being inconsistent with theistic religion, which demonstrates the all-encompassing, compassionate breadth of the true tradition of Vedānta to which he belongs:

“We (the Vedāntins) do not forbid the doctrine that the being Nārāyaṇa (spoken of here by the Bhāgavata School), who is beyond Avyakta (the unmanifested state of the universe), the self of all, and the Paramātman (Supreme Self), divides himself into manifold forms, for it is so ascertained from various Śruti-s such as, ‘He manifests himself into one form, three forms’ (Chāndogyopaniṣat 7-26-2). As regards their (Bhāgavata School’s) opinion that Bhagavan’s (Lord Nārāyaṇa-Vāsudeva’s) worship should be constantly done with a concentrated mind, featuring (the practices of) abhigamana etc., we (the Vedāntins) do not forbid this either.”

The (fivefold) practices spoken of as abhigamana etc., described in the Pāñcarātrāgama are:

In some traditions, the first two elements form the routine of the morn, the following two of midday, and the final one of the evening.

This is an extraordinary statement coming from the proponent of an idealistic philosophy in which the individual and God are identical in a Tertium Quid that transcends both, and who as thoroughly dismisses absolute reality of the universe as he does all possible theories of creation of it.

While Śaṃkara has not mandated these practices, and while it always holds that vicāra in the tradition of the Adhyāropa-apavāda-prakriyā is the way of an Advatin, it is extremely important to note that he has unambiguously made it clear that tradition is not against theistic religion.

Such an inclusive tradition spearheaded by Śaṃkara can to this day be witnessed in the families of his followers and in the spiritual centres believed to be established by him in the four cardinal directions of Indian mainland.

It can also be easily conjectured that his teachers’ tradition of Govindapāda and Gauḍapāda would surely have had a similar disposition towards theism. Hinduism, as it stands today in a vibrant theistic culture of temples, is verily in conformation with this vision of Śaṃkara.

Such inclusiveness stems from the direct realisation of the Advaitic Truth that what appears to be the universe, and its forms, are Brahman in reality, as declared in Upaniṣhadic revelations, such as, Sarvaṃ Khalvidaṃ Brahma is (Chāndogyopaniṣat 3-14-1).

The iconoclastic practices in Abrahamic religions are attributable to the glaring lack of such completeness of vision, thus resulting in isolation of God from the world and limiting Him only as the efficient cause thereof; hence, they cannot be equated with the holistic vision of the Upaniṣhad-s.

In the light of this clarification from Śaṃkara, we may, with a fair degree of certitude, draw conclusions that are affirmative of:

Raghu is a former IT professional interested in Indian philosophy, Sanskrit, and everything classically Indic.