When God Incarnated As Man-Lion 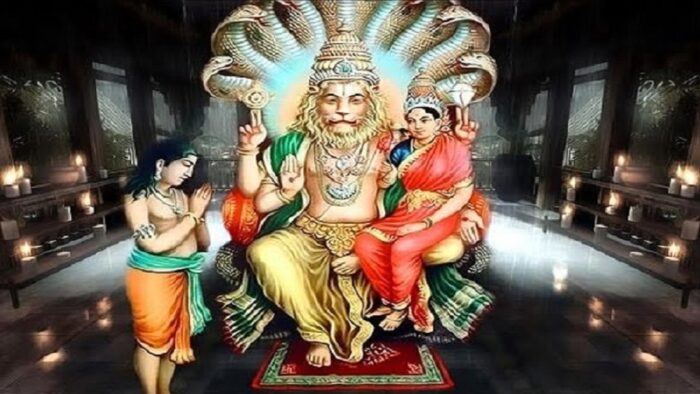 Translation: I salute to Lord Narasiṁha, who gives joy to Prahlada and whose nails are like chisels on the stone like chest of the demon Hiraṇyakaśipu

One of the unique elements of Hinduism aka Sanatana Dharma is the concept of Avatara (incarnation). Hindus believe that God, which is called as Brahman, is not only transcendental in nature, it is also immanent.  More importantly, Brahman assumes various forms and takes Avatara for the sake of devotees and Dharma. This taking of Avatara from time to time, makes it possible for people to establish a direct connection, an intimate relationship with the Lord. 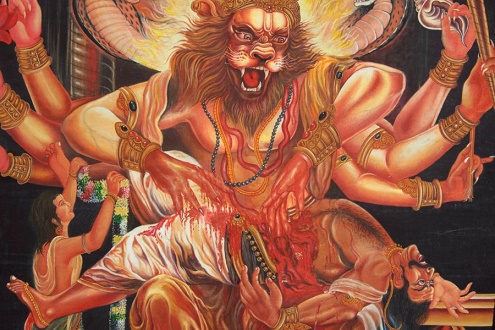 Among all the innumerable incarnations that Brahman assumes, the Avatara of Narasimha is unique not only because the deity has a unique form- half lion, half man, but also because the entire account of the incarnation imparts many important lessons about Vedanta, Bhakti, and Dharma. Detailed accounts of Narasimha Avatara are present in various Puranas- Bhagavata, Agni, Matya, etc., Valmiki Ramayana, Harivamsa, and briefly in Mahabharata as well.

The Puranas are by definition accounts of the past- that includes, human history, cosmology, genealogy, cosmic cycles, metaphysical accounts, philosophy, etc. The purpose of the Purana is not only to serve as a document for human history and genealogies, but also to impart important life lessons about Dharma, Jnana, Bhakti, and Moksha through various stories and accounts- both historical and metaphysical- that would help the reader/listener to attain Spiritual emancipation. Thus, even in the account of Narasimha Avatara, one can find various important lessons incorporated within them.

One of the most important lessons that the incarnation of Narasimha teaches is the fact that Brahman or God is not only transcendent, but is also immanent. In fact, Brahman exists as the Atman-innermost Self of all objects- living and non-living and all these objects derive their very existence and strength from Brahman. Thus, Prahlada says to Hiranyakashipu:

“My dear King, the source of my strength, of which you are asking, is also the source of yours. Indeed, the original source of all kinds of strength is one. He is not only your strength or mine, but the only strength for everyone. Without Him, no one can get any strength. Whether moving or not moving, superior or inferior, everyone, including Lord Brahmā, is controlled by the strength that One (Brahman)” [1]. This statement is a direct reflection of the Upanishadic statement [2]: “Lord exists here everywhere in all the objects of this Universe”. The same is reiterated by Lord Krishna (Gita 15.15), when he says he exists in the heart (Hrdaya) of all beings.

Prahlada continues and says that Brahman is Ishwara- the Supreme controller of the Universe, and He using his own power manifests, maintains, and annihilates this universe [3]. This statement again is the reflection of how the Upanishads describe Brahman [4]. Thus, contrary to the popular assumption (rooted in Abrahamic notion) that God or creator is separate from his creation, Hinduism puts forward the concept of Brahman being the only reality and hence is both transcendent and immanent. Further, Brahman manifests, sustains, and absorbs back the Universe within himself.

The account of Prahlada powerfully imprints these concepts into the minds through its description of how Lord Narasimha emerged from a mere Pillar- which is a non-living entity. People, similar to Hiranyakashipu, imagine that the material world is the ultimate reality and they reject any notion of God as being the ultimate all-pervading reality. They, in their arrogance, ask, where is God? If God indeed exist why cannot I see him? Does God exist in this object, in that animal? Etc. The story powerfully brings forth the fact that God indeed pervades everything and is the source of strength of all life. In fact, the Puranic account [5] itself says that Narasimha emerged out of the pillar to prove as true the assertion of Prahlada that God inhabits everywhere. In other words, the very purpose of the incarnation of Narasimha was to demonstrate that He (Brahman) is the all-pervading Reality.

The only reason that most people, just like Hiranyakashipu, fail to perceive this all-pervading Reality is because they are too ensnared by ego and the six internal passions- lust, anger, greed, illusion, pride, and jealousy- and as a result of this, they fail to develop Bhakti that is essential for perceiving and realizing God. This is reiterated in Prahlada’s address to his father: “My dear father, please give up your demoniac mentality. Do not discriminate in your heart between enemies and friends; make your mind equipoised toward everyone. Except for the uncontrolled and misguided mind, there is no enemy within this world. When one sees everyone on the platform of equality, one then comes to the position of worshiping the Lord perfectly.”

Thus, if people today fail to perceive the presence of God, it is because of their own attachment to material pleasures. On the other hand, if one were to give up material desire and develop devotion towards Brahman, then one will not only perceive Brahman as a deity, but will also realize Brahman as one own innermost Self- one’s true nature. It is for this reason that Adi Shankara in his Vivekachoodamani (Verse 31) says that for attaining Moksha, Bhakti is the highest tool available.

Hiranyakashipu, therefore, serves as a good representation of most people who are attached to material desires and spend their lives in pursuit of sex, wealth, and power, without a care for Dharma. Prahlada, on the other hand, is a personification of Dharmic life- a life full of truth and righteousness, knowledge and devotion.

Another important lesson from the account is how God protects his devotees. When in trouble, people usually go to their family or friends. But, often these people are able to help only to a limited extent. But, the account shows that, Brahman, who is the source of all power, is infinitely powerful and at the same time, he is infinitely compassionate as well. Brahman himself incarnated as Narasimha to protect Prahlada, who was innocent and righteous and who took refuge in Brahman. Thus, the account is trying to show the fact that Brahman alone is the true refuge of the world and He always protects the righteous and the innocent. And hence, people should practice devotion and take refuge in the Lord, so that one may travel in the path of Dharma and attain overall well-being.

The account of Narasimha is particularly interesting because it serves as an example of what the scriptures term as ‘Viparita Bhakti’ (reverse devotion). Though, Hiranyakashipu considered himself as the Lord of the Universe and refused to acknowledge or recognize Lord Vishnu or anyone else as being higher than him. Hiranyakashipu hated Lord Vishnu so much that his hatred consumed his whole being. His thoughts, his words, and all his actions were directed towards Lord Vishnu. And in this sense, and very much inadvertently, he dedicated his body, mind, and speech to Lord Vishnu. This dedication of Hiranyakashipu was so intense that Lord Vishnu himself was forced to incarnate and grant him freedom from mortal existence. Thus, Lord Narasimha incarnated not only for protecting Prahlada and destroying Adharma, but also for granting freedom to Hiranyakashipu, who had worshipped the Lord through his intense hatred. This is a unique concept, which is not found anywhere except in Hinduism. This is a recognition of the power of Bhakti, which even when done in a reverse way, will bear its result.

Then, the very manner in which Hiranyakashipu was killed is also very illustrative. Lord Narasimha cut open his stomach and killed Hiranyakashipu. The stomach is the seat of Manipura Chakra and the entire story symbolically represents how the worship of this particular form of Brahman i.e. Lord Narasimha will facilitate the attainment of Moksha by making the Kundalini rise instantaneously from Manipura Chakra to Sahasrara. 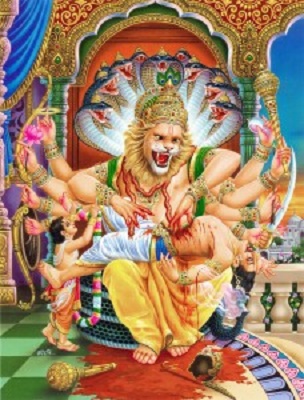 Thus, the incarnation of Lord Narasimha is very unique and imparts very insightful lessons. The most important lesson being- Brahman pervades the whole Universe and He is the last and only true refuge for everyone. People should imbibe these lessons into their minds and inculcate righteousness and devotion in their daily life, so that they can attain overall wellbeing.

Oh Great God Lakshmi Nrsimha, I am drowned in the ocean of day to day life, Please protect this poor one, oh, Lord, Oh treasure of compassion, Just as you took a form to remove the sorrows of Prahlada, and so, Please give me the protection of your hands. – Sri Lakshmi Narasimha Karavalamba Stotram by Sri Adi Sankaracharya