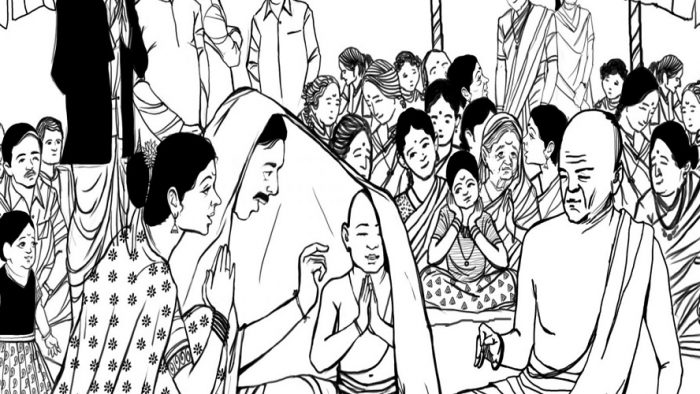 We are all aware about Yogacharya T.Krishnamacharya being a pioneer in using yoga (specifically asana and prANAyAma) for therapy and well-being. But little did we know that he was a great scholar of our sacred knowledge and traditions. One of his long-standing students Raghu Ananthanarayanan has put together an interesting note about how can one use yoga as a tool for deeper fulfillment and meaning in life? He has used the device of an innocent conversation between a young, curious child, Chiku who is Gayatri Iyer, and an elderly teacher Rita, just like the dialogues that used to take place between student and teachers at ashrams. In my discussions with Raghu who is Rita in the writings, I learnt how symbols and rituals of our Hindu culture have been misinterpreted for long and once you know the real meaning, you can only marvel at the profundity of the entire meaning and how it is part of the larger divine order.

The meaning of Upanayanam

upanayanam is the time when a boy stands on the threshold of going on this inward journey.     उप upa means to be clos  or close to a teacher or the path of learning about truth. नयनं nayanam means to lead towards, the child is therefore led to the point where he understands that there are many things in life which he has now to look at for himself and find out the right way to live. He starts preparing for the life of a householder where he starts becoming self-reliant and searches for himself that which is called Truth & Light and what is called Brahman. The one who starts on this journey and can discover his own insights, his own intelligence, his own inner stability is called the dvijan “twice born”. This is however only the first step. When he masters the learning, he is called a “viprA’ and it is only when he really discovers the Brahman within, is he called a “brahmin”.

Chiku: A few years back I had attended a thread ceremony of a cousin of mine and I wanted to know why is it being done? My aunt said that it was customary for boys to do it before they get married. Is that all this tradition is all about?

Rita: Let us not try and look at this ceremony as some ancient ritual that people are trying hard to hold and revive. This does have a deeper meaning in today’s context.

Chiku: Yes, I want to know the deeper significance of these rituals and what does it mean for me today?

Rita: First response would be to the ritual part; our mind has a large portion of what is called reptilian brain and then a mammalian brain, above that is the frontal cortex. The reptilian brain is supposed to respond to basic rituals or dances that signal transition, instinctive responses etc. Every animal has it and so do we. Thus, many of these rituals bring a certain grounding and quietness along with a sense of collective identity. These rituals are very important for human existence.

In the Indian thought, there are clear transition points in a child’s life- both in terms of physical and psychological capabilities. Some of our traditions create important social events around these transitions, so that the context and the child understand these shifts. There are even names for the child at each stage like bAlayam, tanuNam, brahmacharyam, yauvanam etc. With such rituals, there will be a deeper impact sooner or later. The person should also start owning up to the growth, changes and makes meaningful decisions.

Chiku: What happens when there are no rituals?

Rita: Absence of rituals causes certain problems Chiku. Imagine that you are 20 and you continue to behave like an adolescent not taking responsibility for your actions etc. Without owning up to these transitions neither the individual nor the social context makes the effort to socialize and acculturate. Especially at the onset of puberty this lack of education is costly both to the person and to society. The west marks these events through a graduation ceremony etc.

Chiku: What are the various age transitions for a person?

Rita: My teacher Krishnamacharya used to say that the growth of a child is broken up into two stages –

After 12 or 13 there is a clear understanding between what is inside home and outside I.e. there is something called family and people outside of family.

Chiku: Is there a specific age for the upanayanam to be performed?

Rita: There is no fixed age but Krishnamacharya used to say that one should look out for indications when the child starts asking questions about the nature of the world outside. This is a clear shift and must be acknowledged.

Chiku: What kind of questions?

Rita: Questions can be on the roles people play in a family, curiosity about the outside world or behavior of other people unlike one’s community and so on. In the upanayanam ceremony questions are asked to the child like ‘who would you want to become in society?’ There is also a preparation in the ceremony leading to the question and a set of rituals after the question has been answered.

Chiku: Wow! This is well thought of

Rita: Unfortunately, today it is just a mishmash of various rituals and activities without giving a proper meaning to the ceremony.

Chiku: What is the preparatory phase all about?

Rita: It is done to help the child get into a more reflective state of mind to answer the question

Chiku: Once he answers the question then what happens?

Chiku: But can a young child delve deep into such questions?

Rita: Well, see the child has a sense of where his interests lie. Whether or not it is coming from his depths is not the point, the significance here is the process of enquiry or thinking about the answer. The importance of the question is emphasized. The push to start going inward and deeper is very interesting in my opinion.

Chiku: These questions are lifelong no?

Rita: Correct, the initiation to start reflecting on the possibilities and answers is the journey. The child needs to have a sense of why is he/she here? The purpose of being born. Else, you will never take responsibility of your birth and only live instinctively. The purpose of one’s birth must be taken seriously for an upanayanam to be a meaningful ceremony. The cycle of birth will continue until the truth is discovered.

The older form of the ritual comprised of a choice making aspect. The child was taken to the edge of the village/ to the bank of the river and a wise relative spoke to the child about the possible choices. He was then left alone to ponder. When the child comes back and says that ‘he wants brahmo padesam’ i.e. he wants to enquire into truth and go deeper into the self or the search to brahma he is told how to go about it. The process starts by telling the child the story of Vamana, which is by far the most interesting part of the upanayanam. Vamana is an avatAra puruSha, the manifested form of Vishnu in the form of a dwarf and he is supposed to defeat the asura Bali. Bali is very tough to defeat because he has conquered both the worlds and he is also very generous. However, he has become very self-centered and egotistical. Vamana gets many gifts to help prepare him for the journey of going inwards.

Because the journey is a big one, for which one needs a lot of Shakti each of the Devas came forward to give gifts.

Chiku: But one still needs to put in the effort, right?

Rita: Of course, tapas is very important to overcome your ego.

The dwarf with these gifts went up to Bali at the end of his yagnya when Bali had to give away all his wealth to the guests as was the custom in the days of yore. Vamana was the last guest, and Bali had given away everything. “Since your coffers are empty, give me as much land as 3 steps would cover” He asked Bali and Bali said yes even while his teacher Shukracharya warned him. The Vamana grew very large and covered all the earthly lands that Bali had conquered in his first step. In his second step he covered the lands of the devA that Bali had conquered and for the third step Bali offered his head. Vamana stepped on him and thus, ended Bali. The three steps are symbolic of one’s body, ones emotions and ones sense of self. Vishnu was called Trivikrama after the conquest of Vamana.   The three steps of Trivikrama symbolise the three aspects of man:

These three kept free of residues and vAsanA through tapas is the path of Brahmacharya. It is only through gaining a mastery over these three without becoming vain and self centered like Bali can one be a dhArmic person.

So, after being given these gifts during the upanayanam the boy is asked to put his feet on a stone and asked to be as persistent and strong as the rock and steadfast in his journey so that he can come out victorious. He is also warned now you have woken up to this effort, do not be lazy, act ceaselessly. He is taught the Gayatri mantram by his father, this is called the Brahmopadesham

The first person to nourish him after he is taught the Gayatri by the father is his mother when he asks her भवति भिक्षाम दोही “bhavati bhikShAm dehi”:  “Mother give me alms”. This signifies the end of his boyhood when he was nurtured and fostered merely by virtue of being a child of the home. He must now walk the path, deserve the offering and become capable of earning his livelihood and place in society.