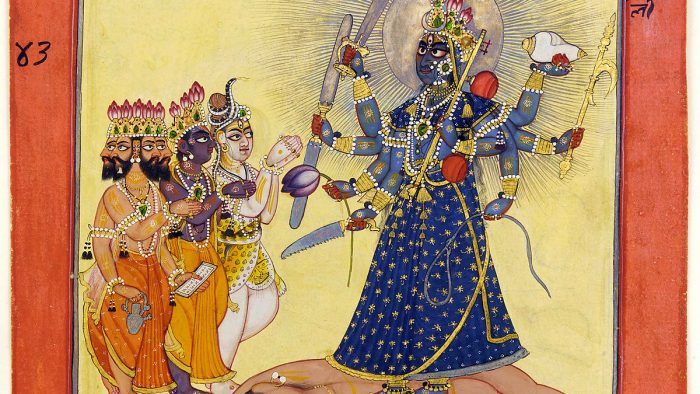 “Tantra is bad” … “Isn’t tantra harmful?”….. “Tantra is done to cause harm”…. “Tantra is not the right path”. These are some of the many comments that motivated me to write about Tantra! I realized people just listen to what others are expounding and add their layers of fear and confusion in relation to things they do not understand. As a result, stories that are misconceptions and sometimes, a total misrepresentation of the concept and entity become popular. The same subjective layering of fear and confusion have warped the story of tantra.

So, then what is Tantra? I started my journey understanding Tantra from the South of India in Kerala in 2016 and ended up learning about it all the way to the Himalayas and then in Eastern India by end of 2019. I have travelled to over 500 temples across India understanding what is it that a temple does? Why it exists and what happens there? Who and what is a deity, Is the deity a god…and what does this all mean? Some questions crop up in general: Why are there so many spiritual disciplines if all of them lead to the same goal? Which was propounded first: Vedanta or Tantra? Among them, which is better? While there seems to be very little criticism of Vedanta, why is Tantra widely criticized? In answer to the first set of questions we may say that this is distinctive of the Indian spiritual tradition. Every human being has the right to choose his or her spiritual path; there are as many paths as there are people…to each his or her own!

There is no one way of spiritual righteousness in the Indian traditions and it creates immense heterogeneity and acceptance of a wide variety of belief systems and practices. On the outset, tantra does not shun the physicality and nature of existence. There is nothing that is polluted or out of bound in Tantra; essentially, Tantra is laid on the foundation that what binds you is what releases you! Hence, desire, fear, anger, guilt, shame, overcompensation, attachment and grief are all embraced with equal fervour.

The human condition is accepted as is in all its flaws and fatalities and movement towards divinity is made possible through physicality. The plethora of experiences a human goes through are considered all valid and real allowing for several highs and lows to occur so ultimately the highs and lows of human experience fade away paving way for equanimity to set in and to understand that there are no highs and lows! A natural progression from duality and physicality towards phenomenological understanding of perception and co-creation is fundamental to tantra. The practice of duality to ultimately reach equanimity in non-duality is characteristic of tantra.

Tantra is an ancient thread of human evolution that embraces physicality, sexuality, emotional upheaval, turmoil, trauma and confusion commonly known as ‘paapa’ and creates space for human consciousness to break through and emerge out of darkness. Generally, Tantra is considered the most difficult path of spiritual progress as the sadhaka has to engage with life in entirety. One has to come face to face with their shadows, and engage with inner darkness through meditation, japa, kriya, mudra, nyasa, yajna and other appropriate rituals. In fact, majority of rituals used in the Vedic traditions in contemporary times are Tantric in nature.

What I understood is that Tantra is a vast body of methods that are employed to expand human consciousness into the universal consciousness. Ancient traditions have been passed down through various schools of lived experiences. The vast body of knowledge has mainly been passed down as ‘Agama’ and ‘Nigama’. Agama corresponds to the extensive literature of Tantric procedures, rituals, temple construction, energy work and maintenance etc. Nigama corresponds to the Vedic literature that goes hand in hand with Agama. Agama refers in literal terms to ‘that which has come down from eternity’. Agama is considered to be spoken by Shiva and listened to by Shakti and Nigama is believed to have been spoken by Shakti and listened to by Shiva.

The knowledge systems of Agama and Nigama have no beginning and no end and have always existed since ’anadi’ i.e eternity, and are eternally existent, ‘nitya’; they have always been there and they will always be there! I learned this eternally existent knowledge is also ‘apaurusheya’ meaning it is unauthored and impersonal in nature and beyond subjective interpretation and is revealed as spiritual wisdom to those that have developed the capacity to receive it. Tagore famously scripted “All that belongs to you, you will receive if you develop the capacity to hold it”. This led me to reflect and understand that the purpose of life is to develop this capacity to receive unauthored and impersonal wisdom and hold it. So, essentially the approach to apaurusheya wisdom is the clearing of unrequired trauma within us so as to create space for the spiritual wisdom to flower and expand within us.

However, what apaurusheya means in the Vedic traditions is very different from how the Tantric traditions understand it. The Vedic tradition takes it literally to understand that the Vedas were seen by the rishis who then passed it on further. In the systems of Tantra, Agama is apauruseya because the sadhaka engages with their karma and memory in the form of trauma by raising their Kundalini for Shakti to meet Shiva at Sahasra thereby creating capacity for apauruseya wisdom to be revealed through the initiation by a Guru. Hence, Tantra is also considered the difficult path as one has to engage with their shadows and unresolved emotions to create capacity within themselves.

Tantra then is one path of developing such a capacity; the word literally means expansion into eternal. The Sanskrit word ‘tanu’ refers to a weakened state of spiritual awakening. Tanu is a Sanskrit word that means “attenuated or restricted”. Tanu is one of the four stages that a person has to pass through in dealing with and overcoming the mental states known as kleshas, which cause suffering and are obstacles to spiritual growth. Tanu is the weakened state in which a klesha or suffering exists in the subconscious, without agitating the mind. The kleshas as described in the Yogasutras are: raaga (attachment), avidya (delusion), dvesha (repulsion), asmita (egoism) and abhinivesha (will to live).  Tanu, then can be referred to as the confusion that envelopes and keeps us engaged in trauma and unresolved emotions.

The verb root in Sanskrit is ‘tan’ and it refers to expansion or stretching. The suffix ‘tra’ refers to an instrument; so, essentially Tantra refers to the instrument of liberation or expansion into universal consciousness. Another etymological interpretation says, Tantra is so called because it expands on the topics of mantra and the principles of reality via tattvas, and thus it liberates us from the cycle of suffering.

Finally, comes the question of the origin and antiquity of Tantra. Since, it is considered that Tantra is apauruseya; Tantra is eternal! The physicality of Tantric literature gets manifested from time to time in different ways. Western researchers have time and again tried to establish that tantra was developed in the 5th or 6th century CE. However, the Buddhist scripture Lalitavistara in its seventeenth chapter mentions that the Buddha had denounced Tantric rites and rituals belonging to Brahma, Indra, Katyayani, Ganapati etc. This establishes that tantra was practiced in pre-Buddist era. The Shantiparva of Mahabharata mentions Shiva Shrikantha as the founder of Pashupata, a sect that later went on to become the foundational basis of Tantra in north India. So, it bodes well for us to assume that there were Tantric schools of lived experience from antiquity and new ramifications and sub schools were added all along from time to time. Majority of Western researchers only talk about Shakta and Kaula marga when they talk about tantra and establish the development of Tantra to 5th or 6th century CE when there is a plethora of other schools that have existed since possibly human consciousness has taken the original bungy jump to merge with universal consciousness. This fragmentation due to a false narrative and misrepresentation created by various segments of documentation has derailed the narrative of Tantra.

No matter which definition and understanding of Tantra we choose, it is now clear that it is a system of learning that facilitates a lived experience expanding all our limitations and imposed conditioning towards liberation or moksha. There are several schools of tantra that have existed since time immemorial. Saurya, Shaiva, Shakta, Vaishnava, Ganapatya, and Kaumara are the major forms of Tantric schools of learning and lived experience of sanatana dharma. 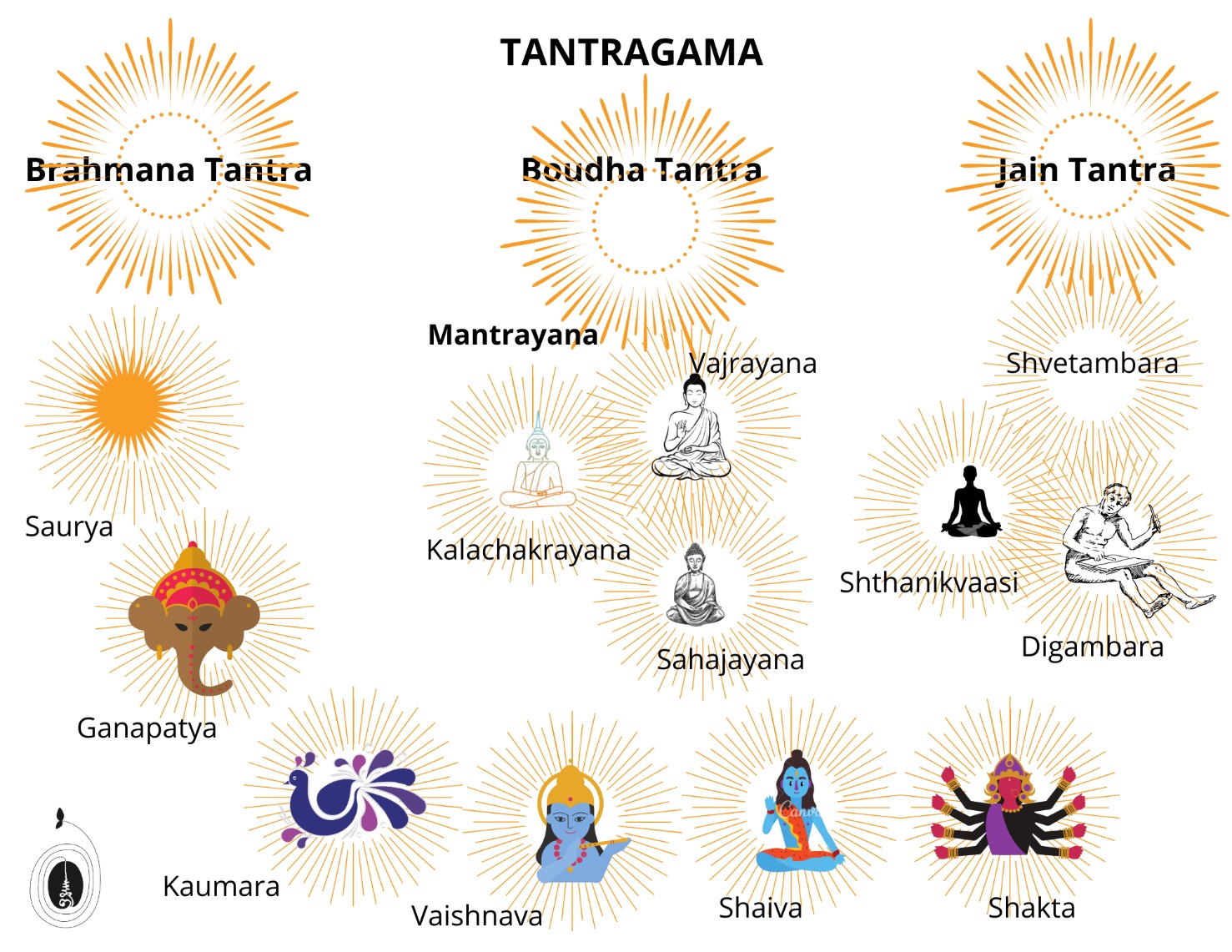 Saurya and Ganapatya schools of Tantra are now more or less absorbed into other systems. Kaumara system is still prevalent in the South of India. Predominant systems of tantra during contemporary times have been Shaiva, Shakta and Vaishnava. The Buddhists and Jains too created their own schools of learning. Tibetan Buddhist schools developed their own system consisting of Vajrayana, Sahajayana and Kalachakrayana Tantra. Vajrayana Buddhist Tantric systems are very closely linked to Shakta schools of Tantra.

Each of these Kranta have 64 Tantras in their fold as described below:

The term ‘Agama’ has been derived in the Svachchhanda Tantra as ‘agatam shiva-vaktrebhya gatam cha girija-mukhe’ meaning the sounds uttered from Shiva’s mouth and absorbed into Shakti’s intellect.

All available Agamas are voluminous and contain content that can be classified into ‘Vidya­pada’ section dealing with metaphysics. Followed by ‘Kriya­pada’ section dealing with rituals; ‘Yogapada’ section with modes of spiritual disciplines. The fourth section ‘Charya­pada’ prescribing the daily routine of a spiritual seeker; it is this section that led to the possible notorious reputation of tantra with its exposition on satkarma or magical rites. Some Agamas of the Shaiva Siddhanta tradition, also contain description of Vaastushastra, temple architecture, and Murti Nirmana Shastra, sculptures of deities etc.

There are various rites that followers of Tantra are required to perform according to their temperament. This temperament is believed to arise due to prior life experience and engagement with the rites, essentially what comes natural to a person is what they have practiced over life times. The seven important classes of rites include Vedachara, Vaishnavachara, Shaivachara, Dakshinachara, Vamachara, Siddhantachara, and Kaulachara. There is another tradition called Samayachara, involving the worship of Shodashi or Srividya. This system was followed by ancient masters like Sanaka, Sanandana, Sanatkumara, and Shukadeva, and was especially developed in Kerala. The followers of Samayachara meditate on Anandabhairavi and Anandabhairava in the lotus of the Sahasrara. Samayachara approach is rooted in Kundalini awakening and requires an adept Guru to give diksha to the disciple and requires consistent hand holding through the process.

Thus, the philosophy of union of Shiva and Shakti can also be called as Tantra; its primary goal is to elevate one from a dual identification towards non-duality. The word ‘Tantra’ brings mixed feelings into most minds; people become doubtful and feel uneasy about its efficacy as a spiritual practice. Most consider tantra synonymous with witch craft and black magic when it is not at all the case. This ancient and great philosophical knowledge system was misinterpreted and misrepresented by the opponents of the Tantra system through false propaganda. This article has been an honest attempt to clear such false assumptions and misrepresentations about a knowledge system that has been coming down for thousands of years through the Guru-shishya parampara. 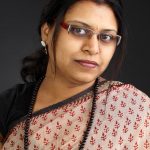