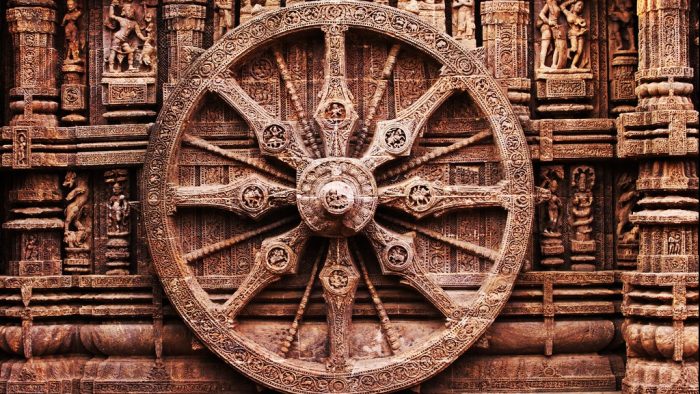 (This is the fourth part of a series of articles on Hinduism. Here are the earlier parts, Part One, Part Two, and Part Three .)

True realization of value takes us closer to the Vedic concept of ṛta. The word ṛta has no equivalent in English but can loosely be translated as the ‘cosmic order in the universe’, ‘divine law governing the universe,’ or ‘gnostic order that is inherent in the universe.’

The word ṛta is derived from the root word ṛ which means ‘dynamism,’ ‘vibrancy,’ ‘seasoning,’ and ‘belongingness.’ In the Vedas, ṛta is often held supreme. The Vedic god Varuṇa identified with water and the oceans is frequently referred to as the protector of ṛta. The symbolism of water and the ocean in connection with ṛta is profound.

This awareness infuses immense gratitude in our hearts. This indebtedness—akin to guilt but without the negativity—that arises in a sensitive mind is called ṛṇa. (In common parlance, the word ṛṇa refers to ‘being in debt’ – of a physical, monetary kind.) In the Vedic conception, every human being by birth carries this baggage of ṛṇa. This baggage is not something mystical but rather straightforward.

Every birth is a miracle – the entire universe conspires to make it happen. Therefore, it is an unwritten duty to clear this debt to the universe. Without this, one will not achieve his or her life’s purpose. Those who ignore the debts they are born into are merely breathing, not alive. The way to clear this debt is by adhering to dharma. Thus, the awareness of ṛta leads to the realization of ṛṇa, which in turn motivates one to pursue dharma.

Having realized that adherence to dharma is the ideal way to live, the question arises: how to practice it? The action plan of dharma is given in the pedagogy of yajña, dāna, and tapas.

Yajña is a specific term for the Vedic fire ritual. In general, it refers to worship of any form. Metaphorically, yajña refers to ‘an act of self-dedication,’ ‘service above self,’ or ‘respecting the divine presence.’ The word yajña comes from the root word yaj, which means ‘respect,’ ‘belongingness,’ and ‘sharing.’ Respect cannot last without a sense of belonging and this belongingness is not feasible without selfless offering.

A beautiful story in the Vedas will illuminate the true meaning of yajña:

The asuras (demons) – the elder brothers of the suras (deities) – went to their father Prajapati, the creator, and complained bitterly that they were often humiliated in comparison to their more illustrious younger brothers. They urged their father to find a solution to this problem and give them a better place. The great god Prajapati smiled and said, ‘O my children, you don’t know the essence of yajña and you don’t practice it even a bit. That is the reason you are compared with the suras and contemptuously dismissed by the wise.’ Needless to say, the asuras disagreed with his observation.

They dared Prajapati to give any test to the two groups of brothers and see who comes out as the winner. Prajapati agreed and so did the suras. He made all the suras and asuras sit on the floor and had a delicious meal kept in front of them. He asked them to eat, but with one condition, that they should not bend their elbows. The asuras were absolutely clueless; they failed miserably. How can you eat without bending your elbows?

But the suras were wise. They rearranged themselves so that they faced each other, keeping a distance of an arm. Then they fed each other, of course without bending their elbows. Then Prajapati told the asuras in a compassionate voice, ‘O my deprived children, this is the secret of yajña. Help the world without any expectations and share your prosperity with the rest. You will in turn be helped and enriched!’

When yajña comes into action for the welfare of mankind, it is known as dāna, or offering. The literal meaning of the word dāna is ‘giving,’ ‘charity,’ or ‘offering’ but the real import of the word is ‘philanthropy.’ While engaging in this act of giving, one must not be insecure, or have the feeling that one is losing something. This demands mental and physical preparation.

The training that leads to internal and external conditioning is called tapas. The term tapas translates into ‘penance,’ or ‘austerity,’ but mostly refers to a single-minded focus on work. Thus the threefold path of yajña, dāna, and tapas leads us to dharma.

The Nature of the Self

All of us, without exception, want to be happy – at all times and at all places. Happiness is our highest goal. All our suffering, struggle, and effort invariably are exercises towards the attainment of happiness. Happiness is the one point where all our diverging natures converge.

The means by which one attains happiness varies from person to person. What constitutes happiness also varies similarly. In general, the source of happiness is considered to be one or more of the following: health, food, beauty, materials, money, fame, power, social status, art, travel, family, knowledge, love, etc.

Needless to say, what brings happiness to one might bring misery to another. But the very nature of happiness, the value, is not divergent. Our own experience reveals that happiness is a state of completeness where no inadequacy is felt. This state of fulfilment, though lasting for a moment, is essentially the same for everyone.

Leo Tolstoy starts off his novel Anna Karenina with the words: ‘All happy homes are alike. But every unhappy home is unhappy in its own way.’ Joy has an absolute form while its opposite, sorrow, has many forms – and at a deeper level, they are all illusions.

This absolute state of joy is similar to the blissful experience of sound sleep. During sound sleep, all demands, desires, and differences disappear. Even the maladies of the body cease to exist during that time. This suggests that joy is innate but sorrow is externally thrust upon us. Our over-indulgence in the world brings sorrow.

Indeed, joy is also a product of external influences. But the happiness that we gain externally is short-lived and eventually leads to sorrow because it operates in the material world. But the bliss that we realize internally does not lead to sorrow. It is also interesting to note that sorrow cannot be generated internally, for our true state is bliss and not agony.

Light, like happiness, is a positive entity whereas darkness is a negative one. Darkness doesn’t exist as an independent entity but rather, it is the absence of light. Sorrow, like darkness, has no independent existence. It is just the absence of joy.

Don’t these instances reveal that existence, awareness, and happiness are natural states of every living being? Even in the physical world, we see concepts such as equilibrium, valency, and steady-state, pointing to a similar truth.

Irrespective of our physical or mental condition, we wish to live on forever, learn everything, have everything, and become fulfilled. The dying one seeks the elixir of life, the weakest one desires the gold medal, and the dullest one desires the top prize. All these are not merely desires driven by external forces but it is our inner nature that motivates us to seek wisdom and joy through these means.

In sum, our ultimate ambition is eternal existence, eternal awareness, and eternal happiness. Further, nobody truly wants to be a subordinate to another; in fact, everyone wants to dominate over the others. This desire for absolute freedom and absolute authority accelerates one’s zeal for eternity. This is the quest after perfection, as Prof. M. Hiriyanna calls it.

Sanātana dharma identifies this desire in a sublime way, considering this to be inbuilt in us as the very nature of our own selves. Absolute existence (sat), absolute awareness (cit), and absolute bliss (ānanda) that are independent of external factors constitute the nature of the self (ātman). The very nature of ātman is sat–cit–ānanda.

The pursuit of attaining sat–cit–ānanda through materialistic paths leads invariably to corruption and annihilation. Those who seek existence, awareness, and bliss from outwardly sources try to establish authority over others. They declare their own freedom at the cost of other’s freedom and invariably become tyrants, blemishing humankind. Sat–cit–ānanda is not something to ‘attain’ but it is something to ‘realize,’ for it is always within.

Sanātana dharma clearly distinguishes these two paths in the attainment of self-supremacy. It has always advocated the spiritual path, which is essentially inwardly and has shunned the path of materialism, which is always outwardly. However, we must remember that although sanātana dharma takes such a firm stand, it doesn’t take refuge in a utopia. It recognizes the materialistic world and gives it its due but encourages the evolution into the spiritualistic.

Materialism is an instrumental value, in that it is only a means and never an end in itself. This is why in the conception of the puruṣārthas, the idea is to manage demand (kāma) and supply (artha) by the global compromise (dharma) in order to attain liberation (mokṣa). Materialism is inevitable but when pursued for its own sake without adherence to dharma and without the larger goal of mokṣa, it leads to destruction of the self and the surroundings. Mokṣa is the ultimate value. Ānanda, which is the very nature of mokṣa, is the fundamental value. All others are secondary and instrumental values.

Hinduism not only crystallized the concept of liberation but also established its instantaneousness. Liberation or salvation is not restricted to a post-death stage but can happen here and now. This brilliant conception is called jīvanmukti – being liberated during one’s lifetime. The Upaniṣadic conception of salvation is not a post-dated cheque but a demand draft.

Let us look at the idea of jīvanmukti with the lens of modern scientific temperament. Such an idea presupposes the futility of heaven, hell, divine judgement, apocalypse, etc. The highest ideal – liberation – can be attained by anyone, anywhere, anytime. It is within our reach. This is a great teaching.

But Hinduism never ignores individual accountability and sincerity in practice. It has the two opposite concepts of pāpa (sin) and puṇya (goodness, virtue). Everyone is expected to reduce their pāpaand increase their puṇya. We may explain the material implications of these two concepts using entropy, which is the measure of disorder or chaos in the universe. What recklessly adds to entropy is pāpa and what sincerely avoids entropy is puṇya.

There is no need to invoke any scripture or authority of any kind to follow the various points thus far. The reason for this is simple. Every religion claims that it is the most superior one and uses the revelations of its scriptures as authority. The proof provided and that which is to be proven is one and the same.

This is absurd, because any book – scripture or otherwise – is the product of the human mind, which is in turn conditioned by its own spatio-temporal limitations. While on the one hand, there is no need to disrespect any scripture, on the other hand it is imperative to transcend all scriptures. We can realize the one underlying spirit in all existence only with the universal experience of oneself, not by reading a book or listening to a lecture.

(Adapted from the article Foundations of Sanātana Dharma by Śatāvadhāni Dr. R Ganesh and translated from Kannada to English by K B S Ramachandra.)