The Tragic Story of Dhaara Nagara 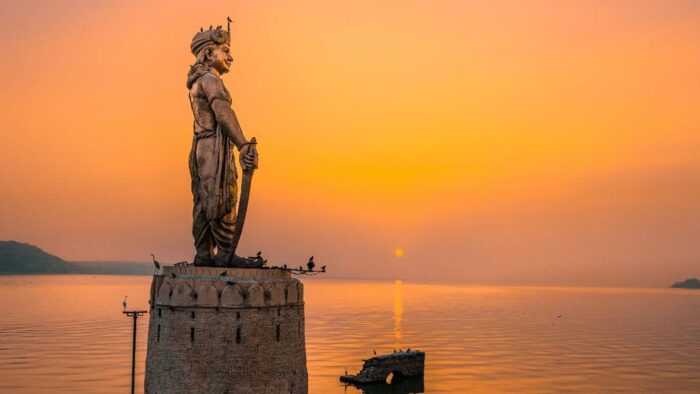 Dhar or Dhara Nagara was the capital of Malwa. Raja Bhoja, the legendary Paramara king of the 11th century had made Dhara the capital of Malwa. Bhoja was an extraordinary genius–a great scholar, an accomplished poet, a polymath, a philosopher, a consummate warrior and a great ruler. His extensive and erudite writings—84 in all—cover such diverse topics as philosophy, poetry, medicine, astronomy, ship building, civil engineering, yoga and medical sciences. Each of the titles conferred on Raja Bhoja became the titles for his books. He rebuilt the Somanath temple, which was ransacked and ruined by Muhammad Ghazni. Not only did he rebuild the temple, he successfully forced Ghazni to retreat beyond the Sindh desert. It was perhaps only Bhoja that Ghazni feared. Many legends abound about this great king.

Bhoja, the son of Sindhula was aged eight when his uncle Munja took over as the regent of the Malwa Empire following the older king’s demise. It was not long before greed for the throne seized Munja, and he ordered the eight year old Bhoja to be sacrificed at the altar of Vindhyavaasini. His trusted minister, Vatsaraja escorted Bhoja to the forest of Vindhyavaasini and confided in him the evil order of his uncle. The young lad, unfazed, nonchalantly wrote down on a piece of bhoorja (Birch) leaf the following verse:

The Emperor Maadhaantha, who adorned the Earth in Krutha Yuga, died. Sri Rama, the slayer of Ravana, the one who built the bridge on the ocean died; then Nala, Harishchandra, Bhagiratha, Dharmaraja and all great emperors have passed away. But, with none of these did Mother Earth follow to the heavens. But, oh Munja!  This earth shall unmistakably follow you to the heavens.

A stunned and moved Vatsaraja did not kill the boy. Munja was so deeply embarrassed when he read this verse that upon learning that Vatsaraja had thankfully disobeyed him repented and crowned Bhoja the King of Malwa. Raja Bhoja then gloriously ruled Malwa for 55 years, 7 months and 3 days. (panchaashath panchavarshaaNi sapthamaasaa dina trayam).

Indian literary history records Bhoja’s deep connoisseurship in poetry and the Arts with immense respect and reverence as well as the magnanimous patronage he gave it. Such was his munificence that he once rewarded seventy horses to Naagavarma, a Kannada poet, for making only an improvisation in his Kannada transformation (in the champu style) of Bana Bhatta’s Kaadambari!

Bhoja Raja’s capital Dhara Nagara was the city of Saraswathi or Vagdevi, the Goddess of Learning. It was a city of learning and a city for the most learned. He ordained that no one, not even a Brahmin found wanting in erudition should be permitted to stay in Dhara.  It was said that only after passing a tough test of knowledge at the city gates was anyone allowed inside. It was only appropriate that Bhoja had built a wonderful temple to Vagdevi in his capital.

Given this, it was natural that when we visited this selfsame Dhaara Nagara, we were indeed filled with a high sense of reverence, pride and anticipation. Anticipation that we would be partaking of history of one of the most celebrated Kings of India in his very own Bhoja Shaala. But the Dharaa Nagara of today almost immediately dealt a telling blow to our Hindu sensitivities.

Although we were well-aware of the controversy surrounding Bhoja Shaala, it was an entirely different feeling to experience it in person. Bhoja Raja’s Saraswathi temple is now a mosque. The once grand temple has been reduced to a bare, fallen quadrangle. The pillared corridors of a monumentally grand temple now stand as mute testimonies to barbaric vandalism. Not a single human figure remains there today. Perhaps it’s blasphemous to offer namaaz to or amidst human idols. Fridays are reserved for namaaz and Hindus are forbidden from entering the temple during this time. A huge dargah has imposed itself upon the entrance of the temple. Although this ‘temple’ is now under the Archeological Survey of India (ASI), it wasn’t the well-pruned signature lawns of the ASI or the usual information boards about the place that had greeted us. Instead, a huge instruction-board at the entrance warned (the Hindus) not to carry any articles of worship into the ‘temple’ except ‘two’ flowers and less than a handful of rice. It is therefore no surprise that all the advice and the warnings displayed there were only meant for Hindus. ASI, which otherwise does a very commendable job in maintaining its sites, has hardly a visible presence in  Bhoja Shaala. The ‘temple’ is hardly maintained, and the absence of even the usual information plaques and placards of the ASI is conspicuous. The Saraswathi (Vagdevi) idol, which once was the main deity, is now just another exhibit at the British Museum. It is evidently a matter of pity, and national and cultural shame but it is also unsurprising that the Government, since the time of Nehru, has made no effort to bring back the Saraswathi idol. The main quadrangle. The central pit, which some believe was a huge yagna kuNDa.

It is undeniable that Dhaara Nagara awakened in all of us a strong sense of revolt and dejection. This was the glorious city of Raja Bhoja, where he composed his elegant Champu Ramayana, which contains such gems as the following: kishkindha kaanDa.

“The light(n)ing had ceased. The orchestra of the thunder had ended. The cloud-curtain had been lifted. The lady (of the) monsoon thus departed.”

We had to soothe our anger and helpless anguish by recalling this. What’s even more amazing is the fact that Bhoja composed the Champu Ramayana in one night, even as he was fighting a war with Muhammad Ghazni! The Yuddha kaaNda remained unfinished. He had famously declared that the Yuddha KaaNda would be ‘enacted’ the next day on the battle field. Unfortunately, he did not live to complete the Ramayana.

The lady of Dhara Nagara, Saraswathi herself too had thus departed. The cloud-curtain may have been lifted, but the Sun did not shine on Dhara Nagara again. The orchestra and the lightning had indeed ceased.

It is ironic that Bhoja’s stellar achievements in the fine arts have overshadowed the valour and sacrifice of the king, ‘Raja’ Bhoja. In a tragic sense, we ourselves were the samples of an accurate representation of the average Hindu psyche of today. Kshaatra, or the Warrior Spirit of which India has a great tradition has been forgotten with criminal disdain. Bhoja himself, the perfect epitome of the Kshaatra spirit, is remembered less today for his military valour than for his accomplishments in learning and literature. We may blame the Marxists’ distortion of history and their systematic brainwashing of at least three generations of Indians. However, it is equally our failure that we have enabled the Marxists their perverse success. It is indeed sad that we, instead of proudly cherishing and celebrating our history, our kings, our traditions, our culture, our Gods, our arts and our land, have to first salvage them from the contempt and disregard from our own people.

A measure of the timelessness of Raja Bhoja is the fact that every drop of water that the city of Bhopal drinks today is from the tank that he built (at Bhojpur)! This is meaningful at several levels: for a thousand years, the dhaara (flow) from this tank has remained unceased. Yet, the gratitude that Hindus of today show to Bhoja is merely an unkempt Bhoja Shaala that we have to cringe to lay claim as ours and offer prayers amidst a posse of policemen.

When Bhoja fell, Dhaara Nagara lost its support, became niraadhaara. Saraswathi herself lost her support. Everywhere, scholars and the Learned were subjected to humiliation and contempt.

And so, the Dhaara which lost its strength, support and its very bearing in the 11th century has not regained it in a thousand years. It is a telling testament to how we treat our own history and culture. We are today indeed a “nation that forgets its history is doomed to repeat it.”

The Saraswati temple is definitely not a mosque in disguise. It is impossible not to see that it is a Hindu temple that has been reduced to this state only to facilitate namaz. But, we are so confused and helpless, we don’t know how to act or react to this. How do we reclaim it? Or should we?  If yes why? If no, why not?

We only know that if and when we go to Dhaara Nagara again, we will remember not to go on a Friday. And we will carry no more than two flowers.