The Need For A Kshatriya Mindset: Part I 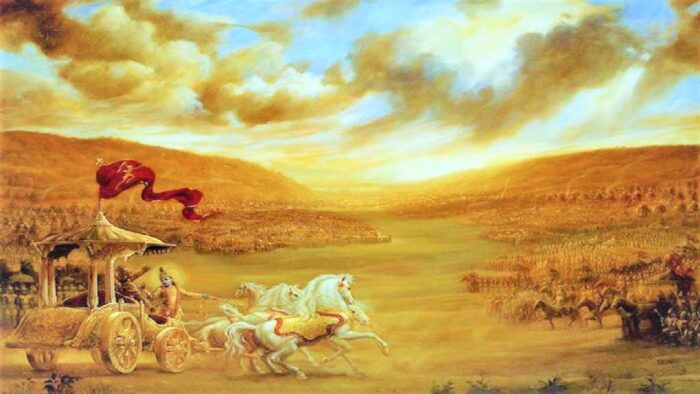 When you think about Krishna’s life, it is full of difficult moments that for most ordinary people would have led to a life full of suffering and disappointment. And even after his life’s work is done, Krishna has to watch silently as His family and clan, the Yadavas, destroy themselves.  At the very end, Krishna has to face an ignominious death.  He sits at the base of a tree, and is shot in the foot by a hunter who mistook His feet for a deer.  This is how He, one of the greatest avataras of Iswara in our tradition, departs from this world.

When we look at the bare facts of Krishna’s life, we think, what a life of hardship, of incessant sacrifice that is never rewarded, of separation, sorrow and suffering.  We think this is not a life worthy of a hero, let alone a god, the most beloved god of many Hindus.  Where is the glory of His deeds?  He spends much of His life running away, first from Kamsa, then from Jarasandha.  The war for which He is remembered, He is remembered for breaking the dictates of war.  He is constantly separated from His family, His friends, His loved ones, His consort.  Rama faced pain, too, but He had to his credit Rama Rajya—a reign of unsurpassed nobility, righteousness, peace and harmony; Krishna, on the other hand, presided over the end of one era and the dawning of a darker era; He wrought and presided over the most destructive war this world has ever seen, a war that led to the demise of the greatest heroes of that time, a war that resulted in a hollow victory that brought no joy to its survivors.

Still, it is Krishna who is considered the purna-avatara, the complete avatara, amongst the bhakti movements of India.

Now, we turn to Arjuna.  Arjuna was certainly a valorous hero of the Mahabharata.  He was the son of Indra, the highest among the devas.  He was an unparalleled archer and warrior.  But he was also very human.  He was proud, impetuous, and did not possess the steadfast, thoughtful wisdom of his elder brother, Yudhishthira.

He was also the best, and the most special friend of Krishna. But the Mahabharata war changes all this. To be more specific, the revelation of the Bhagavad Gita turns this sweet friendship into something different and deeper, something extraordinary.

And so we can now turn to the Mahabharata war.

Krishna violated (and instructed others to violate) many of the norms of warfare in order to win the war.  Nowadays, a number of modernists largely brainwashed by Abrahamic categorical concepts of right and wrong are uncomfortable with the Krishna of the Mahabharata.  They try to whitewash Him by disparaging His actions but proclaiming that it was justified in this one special case because the war of the Mahabharata was somehow a special war, a just war, a war that had to be waged and won for the welfare of humanity.  And therefore, while Krishna’s actions viewed in isolation, according to these people, would be reprehensible, it can be excused in this instance as a special case because of the importance of this particular war.  They miss the fundamental ethos of the forest religions of India, which have always been grounded in a constantly mutating situational ethic which nevertheless is grounded in a higher eternal principle of truth.  This was not about the ends justifying the means but about acting in accordance with Dharma, which is based on a subtle and intricate framework of situational ethics.  This is why Sanatana Dharma ever changes but at its core never changes and the ever changing is never different from the never changing.

What was the Mahabharata war really all about?  It was a dispute over a measly bit of land between rival sets of cousins.  Through a complicated network of alliances and other rivalries, just about every kingdom in Bharatavarsha (at the time geographically much, much larger than the current India / Pakistan / Bangladesh) became involved.  It became a war of huge proportions, but it was triggered by one small intra-family dispute.  It is rather similar to World War I, which was also catalyzed by a petty dispute but then pulled in all the nations of Europe through various alliances and concern about imbalances in power on a continental and global scale.

We rightfully think of the Pandavas today as heroes.  And so perhaps it seems to make sense that a whole nation should come together to wage war on their behalf.  But in their times, the Pandavas were not great heroes. They were misfits of shadowy parentage; pariahs who were alternately exiled and in hiding for long stretches of years; five brothers who brought disgrace and dishonor upon themselves by gambling away their wife to their enemy and allowing her to be disrobed, manhandled and shamed before the entire court.  Nor was Duryodhana an altogether terrible villain.  He was an administrator without peer and Hastinapur, his capital, was eulogized for being a well-administered kingdom. Duryodhana was widely and justly regarded as a competent and fair king.  Balarama, Krishna’s elder brother, actually favoured Duryodhana and his brothers over the Pandavas in the great war.

Still, Krishna orchestrated this war and made sure that it was fought and won by the Pandavas.  Surely, he did not come to the Earth just to help five misfit brothers reclaim their kingdom and dispatch some other demons on the side.  No, there is something much deeper than that.  The Mahabharata is all about wheels within wheels in terms of lessons to be learned as to how to live an ethical and principled life under complex circumstances—not too different from the complexity of life situations that many of us are facing or will be facing in the near future.  Through this seemingly simplistic war over a bit of land, something much greater was happening, something that was necessary for the overall harmony of the universe and the smooth turning of the wheels of time.  An age was coming to an end and a new age about to begin—the Dvapara Yuga was drawing to an end and it was time for the advent of the Kali Yuga, the fourth Age of the Universe.  The Kali Yuga is the lowest of the four yugas in the cycle of time in Hinduism—it is an age of increasing darkness and disorder. It was time for the great heroes of the earlier era to pass from this world and leave the world to the humans of diminished faculties and energies.  A very large part of Krishna’s role was to usher in this new age of increased degradation in the most harmonious way possible and, in the process, to teach us how to live and make spiritual progress in this new world.

It was also a pointed lesson to us that in this age of tamas (one of the three gunas, the main characteristics of which are sluggishness, darkness and ignorance), we must always be vigilant against the tamas that creeps up within us, that deludes us into inaction and apathy.

Krishna comes to us in a world that is increasingly grey than black and white, as the Semitic religions (Judaism, Christianity and Islam) sometimes rather simplistically portray it to be.  Arjuna’s lament at the beginning of the Gita finds resonance within us.  It is a difficult task that has been laid upon his shoulders.  And this is part of what Krishna wants to show us, that in our times, things become more complicated, and thus what is right and wrong is harder to discern.  Our world is not as simple as it once was.  Our roles and responsibilities are not as prescribed.  Arjuna always knew he was a Kshatriya—but we live in a world of multiple identities.  Still, Krishna’s lesson to us is that a clear path of dharma can be revealed to us when we follow the principles of the Gita.

It is also a powerful reminder that we must always fight for what is right, even when the stakes are seemingly minimal. Perhaps the Pandavas and their armies thought they were only fighting for a little piece of land, but in reality, their war gave us the Bhagavad Gita, the instruction manual of Dharma for our times, and enabled the smooth passing of one yuga into another.

Continued in the next part