These are six branches of learning whose knowledge is considered a pre-requisite to learning the Vedas. They are: Kalpa (ritual), Vyākaraṇa (grammar), shikshā (phonetics), Nirukta (Etymology), Jyotisha (astronomy) and Chhanda (Prosody)

Shikshā is one of the six Vedangas, treating the traditional Hindu science of phonetics and phonology of Sanskrit.

Its aim is the teaching of the correct pronunciation of the Vedic hymns and mantras. The oldest phonetic textbooks are the Prātishākyas (prātiśākhya, a vrddhi abstract from Sanskrit prati-śākhā), describing pronunciation, intonation of Sanskrit, as well as the Sanskrit rules of sandhi (word combination), specific to individual schools or Shakhas of the Vedas.

The Prātishakhyas, which evolved from the more ancient padapāthas around c. 500 BCE, deal with the manner in which the Vedas are to be enunciated.

Several others known to exist till recent centuries have been lost. A manuscript of Maitrāyaṇīya Prātishākhya existed till a few decades back for instance. Likewise, the Bāshkala Prātishākhya belonging to Rigveda is found quoted in literature.

Will be dealt in future articles.

Kalpa Sūtras are systematic and practical, aphoristic treatises laying down the procedures for the performance of Vedic rituals for its adherents. The Kalpa sūtra are typically aligned to one of these recensions or Shākhās of the Vedas. For instance, the Baudhāyana texts are aligned with the Taittiriya Samhitā, Taittiriya Brāhmaṇa and the Taittiriya Āraṇyaka. So is the case with the sutras of Āpastamba, Bhāradvāja, Hiranyakeshin, Vaikhānasa and so on.

Types of the Kalpa Literature
1. Shrauta Sūtras: The Shrauta rituals are very complex Vedic rituals requiring the use of the 3 Vedic fires. They employ Vedic mantras in their liturgy and often require a team of specialist priests for their performance. The Shrauta Sūtras often form the core text of the entire Kalpa Sūtra, and the following Grhya Sūtra etc., presuppose their existence.
2. Grhya Sūtras: Deal with the domestic fire rituals. The Grhya rituals are comparatively simple, and can be performed by a householder without the aid of priests. They employ only one fire and their liturgy consists of collections of verses taken from various Vedic texts.
3. Dharma Sūtras: These are like the laws of Manu, being codes of conduct. The Dharma sūtras are manuals of ethical instruction. Unlike the Shrauta and the Grhya sūtras that restrict themselves to the parent Vedic school, the Dharma Sūtras are more general in their sphere of instruction. They cover the duties and the rights of people belonging to different stages of life and castes, contain instructions on ritual purity, morals, atonements for various sins, and the kārmic result of various sinful and virtuous actions and so on.
4. Shulvasutras: These are mathematical/geometrical treatises dealing with the construction of altars of various shapes and sizes for the performance of Vedic sacrifices. They are often included in the Shrauta Sūtras.
5. Pitrmedha Sūtras: Treatises on cremation of the dead. They lay down the correct procedure for the funeral ceremony, for adherence by the son or a close relative of the deceased person. Often included in the Shrauta Sūtras or appended to the Grhya Sūtras. The surviving texts in this class are those of Āpastamba (or Bhāradvāja), Baudhāyana, Gautama
6.Pravara sutras: List of various lineages, and clans and their progenitors of these clans and so on.
7. Other miscellaneous texts: Parishishtas, snāna sūtras and so on.
The following chart gives some of the major surviving Kalpasutras related to the different Vedas: 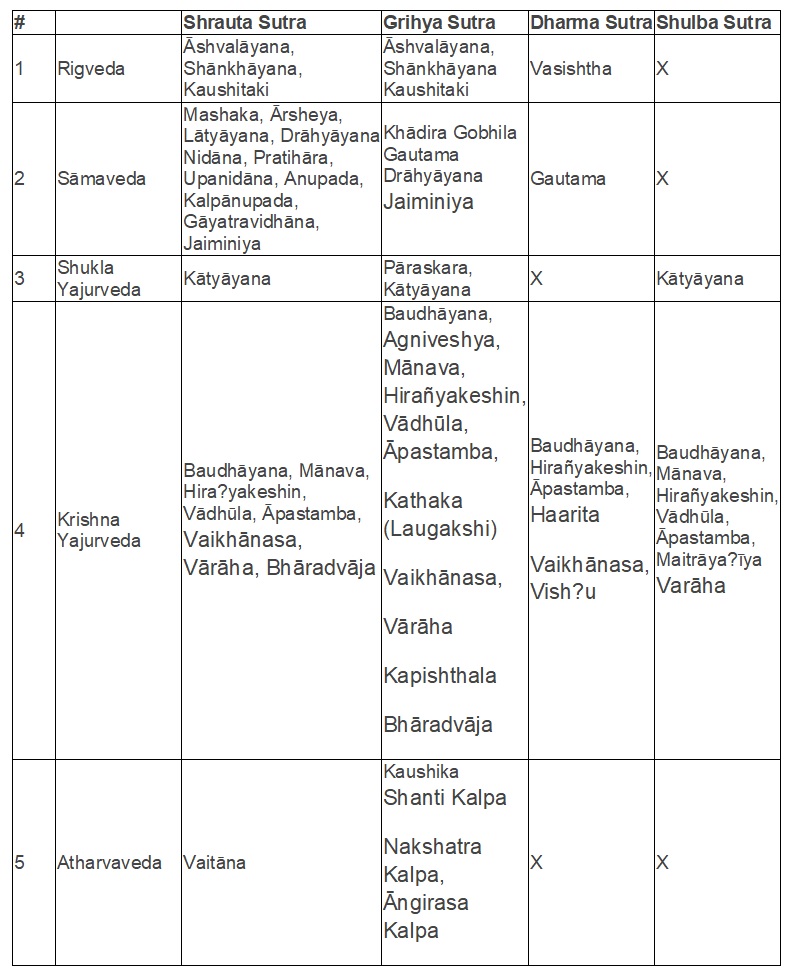 Many of these Kalpa Sūtras have commentaries written on them by later scholars, and therefore form a vast literature in themselves.

Unlike later texts on Jyotisha which deal mainly with Astrology, the Vedanga texts of Jyotisha deal with astronomy. The division of time in smaller units, planetary motions and positions and so on were of vital importance to plan and execute Vedic rituals per a pre-determined schedule and per the proper procedure. The Rigveda and Yajurveda have a Vedānga Jyotisha authored by Rishi Lagadha whereas the Atharvaveda Jyotisha is authored by Rishi Kashyapa. In later times, the astrology aspect of Jyotisha became a very popular tradition in the Hindu society and dozens of texts belong to astrology exist. However, texts on astrology do not strictly fall within the Vedānga category and should be studied separately because they do not have any direct Vedic connection.

This Vedānga deals with derivation and etymology of Vedic words and supplements Grammar. It comprises of a lexicon called Nighantu and a commentary on it by Rishi Yāska called the Nirukta. In the tradition of Atharvaveda, a Kautsavya Nirukta also survives. Many older works in this category by Shākapūṇi, Upamanyu etc., have not survived but are found quoted in existing works.

Much of Vedic Samhitas comprise of verses that have a fixed number of syllables arranged in particular order. The oldest surviving work on Vedic Meter is by Pingala Muni, who is said to be the younger brother of the great grammarian Panini. This subject matter is also dealt with in several ancient surviving works such as the Chhandovichiti of Patanjali and the Rik-Prātishākhya of Shaunaka.

The main principle of Vedic meter is measurement by the number of syllables. The metrical unit of verse is the pada (“foot”), generally of eight, eleven, or twelve syllables; these are termed gāyatrī, trishtubh and jagatī respectively, after meters of the same name. A Richa is a stanza of typically three or four padas, with a range of two to seven found in the corpus of Vedic poetry. Stanzas may mix padas of different lengths, and strophes of two or three stanzas (respectively, pragātha and tricha) are common.

In the Indian tradition, it is customary to know three things about each mantra : The devatā (deity), the Rishi (the speaker) and the Chhanda (the poetical meter). It is forbidden to study the Vedas without knowing these 3 things about the mantras. All good editions of the Vedas explicitly list these 3 for each mantra at the beginning of each chapter, sūkta (hymn) and so on. Many of the meters of the Vedic verses (like Ushnika, Gayatri, Jagati etc.) are actually mentioned in some mantras of the Rigveda, Atharvaveda etc., implying that knowledge of prosody was presumed by the Rishis of these mantras.

The term Upaveda (“applied knowledge”) is used in traditional literature to designate the subjects of certain technical works.  Lists of what subjects are included in this class differ among sources. A commonly accepted list is as –