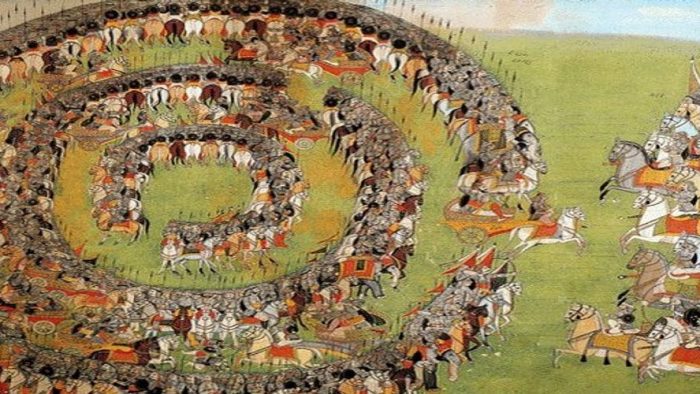 Read part I and part II.

The nuanced details of the 18 days war is quite interesting. Elaborate details of the Vyūhās (troop formations) on each day of the war are provided. For example, details of troop positions of responsibility in the Vyūha, number of soldiers in vantage points and from which kingdom they were, position in the Vyuha of important warriors and who protects them and so on and so forth. Breezing through this maze of details –

14th day – Sakatā and inside this, Padma Vyūha and hidden inside this was the Suchi (needle like) Vyūha by Kauravās (this special formation was master-minded by Dronā to protect the Sindh king Jayadrathā, whom Arjunā had vowed to kill before sunset on the 14th day)

b. The idea of Sena vyūha was given by Thowmyā, the purohit of Pāndavās

c. At noon on the 6th day, Abhimanyu forms Oosi Mukha vyūha to split into the Kauravā army

d. This vyūha looks like a junction of 4 roads

f. Krupā positioned in the right leg was surrounded and protected by soldiers from South India

g. This is a peculiar vyūha master-minded by Salyā. It was decided by Duryodhanā that the entire Kauravā army will move and attack the Pāndavās in pairs.

Micro-details about Vyūhās – some examples 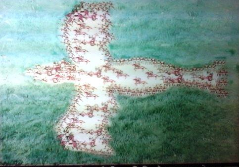 Krouncha (heron) vyūha by Yudhishthirā on the 2nd day had the following troop positions:

Krouncha is a bird (heron) with a sharp pointed beak

front of the right wing – Abhimanyu and Sātyaki

Garuda (eagle) vyūha by Bheeshmā on the 2nd day: 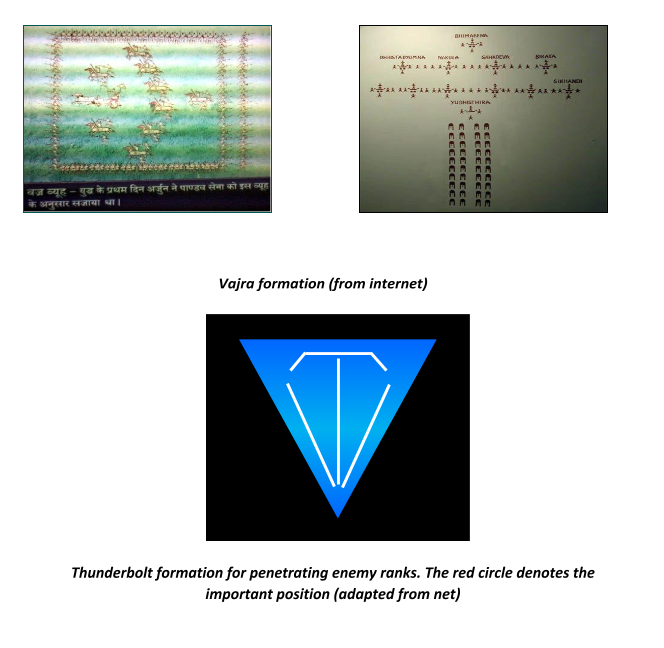 This formation is considered very difficult to penetrate. The Pāndavās countered it by Vajra vyūha. 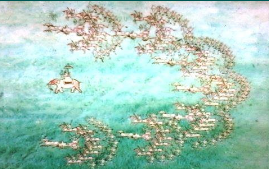 Sarbatomukha vyūha (safe on all sides)

This formation is considered very difficult to penetrate. The Pāndavās countered it by Vajra vyūha. 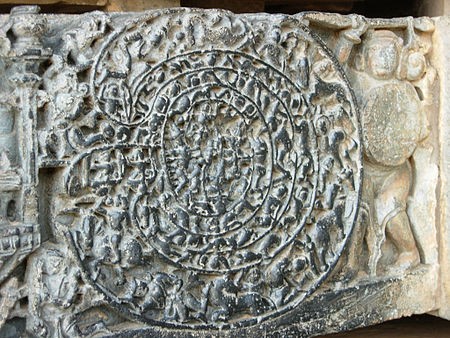 Dronā strategised this formation on the 13th day. This formation by Drona had 6 concentric circles under the guard of 6 Mahārathis – Karnā, Dronā, Ashvattāmā, Duhshāsanā, Shalya and Krupācharya. Duryodhanā was positioned at the centre with different warriors at the various layers. Jayadrathā and his army were gate of this vyūha. In this formation, the warriors formed concentric circles and the enemy had not only to penetrate all the layers to reach the centre and defeat the key opponent but also to come out after that. Abhimanyu penetrated the formation successfully and reached the centre but was killed.

Vyūha by Drona on the 14th day

Dronā formed a triple layered vyūha on this day.

2nd layer – padma vyūha, which was taken charge of by Durmarshana, brother of Duryodhanā

10th day – Arjunā used Parjanyāstrā to produce water from the ground for Bheeshmā lying on the bed of arrows.

14th day – Dronā used Divyāstrā against Sātyaki and to counter this Sātyaki used Vārunāstrā. Yudhishthirā used Shakti astrā against Dronā who in turn used Brahmāstrā against Yudhishthirā. This reduced the Shakthi astrā to ashes and Yudhishthirā used Brahmāstrā to counter this. Sātyaki and Bhurisravā used the technique of ‘Prāndham and Uthprāndham’ to fight with each other. These refer to ways of handling/rotating the sword. Arjunā used Aindrāstrā against the Kauravā army. Arjunā used both his hands to aim arrows (he is the only one who can use both his hands to aim arrows. It is for his ability to use both his hands that he is also called Savyasātchi. It is mentioned that he is swifter with his left hand).

It is mentioned that on the 17th day, midway through the day, Bheemā had in his chariot the following weapons left – 12,000 Ballās (sharp arrows with spikes); 60,000 Bānās/arrows; 2,000 Nārāsangās (arrows with saw-like teeth); 3,000 Pradhārangās, swords, spears and other weapons.

* It is mentioned that this is equivalent to Indra’s Vajrāyudhā. It has 6 wings and can travel very swiftly at great speed. It is considered equivalent to Vishnu’s Chakrā and can cause great damage.

Names of the Bows

Names of the charioteers

On the 14th day, Krishnā arranges for a chariot with a flag with Garudā as the symbol to be fully laden with all kinds of weapons. Later that day, Krishnā blows his conch in the “Rishaba Swarā” to call his charioteer Tārugā and asking him to drive the chariot to Sātyaki to help him and give him all the weapons.

* It is interesting to note that the flag (Dhwaja) of the Pāndyā had mountain (named Malayam) and not fish as is known to be the symbol of the later Pāndyā kings.

Conches of some important personalities

These different conches are known to produce different swarās or notes. This helped others in different parts of the battle field to identify the person blowing the conch.

* Story of how Arjunā obtained this conch is explained in detail in Mahābhāratā.

Three teachings which are considered the essence of Mahābhārathā are mentioned by Vyasa. They are Vishnu Sahasranamam, Bhagvad Gita and Sanathsujātheyam. It is mentioned by Vyāsā that these three are meant/addressed to people with three different qualities, implying that dharma have to be told in different ways to different people to be understood and appreciated properly. For example, Dhritarāshtra with Tamo gunā was told Sanatsujātheyam by Sanatsujāthar. Arjunā with Rajo gunā was told Bhagvad Gita by Krishnā. Yudhishthirā with Sattva gunā was told Vishnu Sahasranāmam by Bheeshmā, from his death-bed. It is pertinent to note that Vishnu Sahasranāmam told by Bheeshmā to Yudhishthirā is till date recited and heard in many homes, especially in South India. The details provided above have been taken from abridged versions of Mahābhāratā by Vyāsā leaving one wondering how much more details would have been in the original version.

Other assorted information and connections

Two of the Pāndavās, Nakula and Sahādeva are known as experts in handling cows and horses, respectively. In fact, during living incognito during the last year of the vanavās, they worked in cowshed and horse-stable, disguised. Mrga Ayurveda, a branch of Ayurveda, mentions two books on Gava (cow) and Ashva (horse) Ayurveda written by Nakulā (book – Vaidyaka Sarwaswam) and Sahādeva (book – Vyādhi Sindhu Vimardhana). In Ayurvedic ithihās, Punarvasu Atreya is mentioned as the student of Sage Bharadwaja. Agnivesha who authored Agnivesha Tantra (which is now known as Caraka Samhita) is the student of Punarvasu Atreya. It is interesting to note that Drona’s father was sage Bharadwaja and Drona’s teacher’s name was Agnivesha. There is also a book by the name Agnivesha Rāmāyana.

Family history of the Pandavas and the Kauravas

Family history from king Nahushā onwards is shown. The ascendants to the throne are highlighted in red. The numbers indicate the succession order. Since the focus is on the kings who ruled, some names are not mentioned. For instance, Karna, the eldest son of Kunti and Mādri’s sons.

Mahābhārata also narrates details of the lives of some kings – whom they married, how they lived, how they ruled, happenings during their reign, etc. For example – Sage Bhrigu’s son is Richikā, whose son is Jamadhagni. His wife is Renukā and their son is Parasurāmā. It is mentioned by Vyāsā that Sage Parasurāmā in his killing spree of the Kshatriyās was asked to give land by sage Kashyapā. While Parasurama went to the southern tip, Kashyapā took charge of the rest of the land. This includes the beautiful mountainous region in the Northern part. It came to be called Kashyapa Meru. It is now known as Kashmir from the word Kashyapa Meru.

Mādri’s sons and their families

Kunti’s sons and their families

Karna had four sons, all of whom died in the war.

Page 42 – “The Mahābhārata, which mentions……….Vavravahan, the son of Chitrangada by Arjuna……It is also said that Vavravahan, while fighting against Arjuna, ‘raised his standard which was decorated most beautifully, and which bore the device of a lion in gold’ ……….This standard displaying a lion appears, therefore to have been the one used by the Naga kings of North Ceylon (Naga and Yakkas…before arrival of Vijaya and later Tamils)……the standard of the lion, which appears to have been the emblem of the Nagas of North Ceylon, continued to be the flag of the Ceylon king till the Island was ceded to the British in 1815 AD.”

Bheeshmā administered the medicine by name ‘Visalyakarani’ to Duryodhanā on the 7th day to relieve him of the pain caused by the deep wounds and to cure his wounds.

Mention is also made of river Saraswati. Vyāsā had lived in its banks. It is mentioned that at the end of the 17th day, the surviving kings on the Kauravā side (Salyā, Chitrasenā, Sakuni, Ashvattāmā, Krupā, Kruthavarmā, Sukshenā, Arishtasenā, Dhruthasenā, Jayathsenā and Duryodhanā) went to the banks of Saraswati (two Yojanās from their camp), drank water there and discussed the situation. The mention of river Saraswati is interesting because it is archaeologically shown to have dried up around 2000 BC.

Naming of the daughters

The daughters were named after their (king) fathers and/or their state. Examples:

Naming of the sons

The sons on the other hand were referred to after their mothers. Examples:

Many of the kings also bore names after their kingdom.

Another interesting point is how married men were referred to – they were associated with their wife’s name. Few examples –

This article was first published on Indiafacts and has been reproduced here with permission.

The author is in the Department of NMR, All India Institute of Medical Sciences, New Delhi.