On Behalf of Polytheism 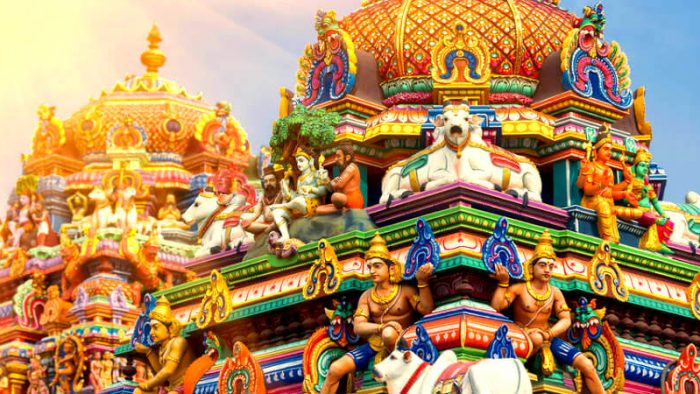 The most fallacious argument in the field of study of religion is the assumption that monotheism (one-god-ism) is either somewhat superior to polytheism (many-god-ism), or polytheism invariably leads to monotheism as the nescient intellect evolves. Polytheism is but an also-ran and a mere curiosity in the mainstream of theological beliefs dominated by monotheism.

A lot of ink and blood has been spilled in the history of mankind over trying to buttress this assumption. In this five-part article, I will examine:

“Those who can make you believe absurdities, can make you commit atrocities”— Voltaire, Questions sur les miracles.

“The most important compliment that monotheism has ever paid itself is that it is the religion of justice. According to the widely held conviction of the monotheistic religions, morality and law first came into the world with belief in a single god.” [1]

The belief in a single God alone was perceived consistent with the unifying reason. John Locke, an Enlightenment thinker commonly known as the Father of Liberalism, penned The Reasonableness of Christianity and ‘proved’ how biblical miracles and divine revelation were consistent with reason. He also implied that individual liberty is protected best with belief in a single God, thus ironically belittling the individual liberty of millions who looked at the Divine differently.

Immanuel Kant, my favourite Western philosopher otherwise, argued in his Religion within the Limits of Reason Alone that one single mind, God, alone can ensure the achievement of Summum Bonum (the highest good). Chateaubriand’s words are representative of the Western view[2]:

The Christian religion, of all the religions that ever existed, is the most humane, the most favorable to liberty and to the arts and sciences…the modern world is indebted to it for every improvement, from agriculture to the abstract sciences.

He argued that even the meanest of Christian man was more moral than the most eminent of the philosophers of antiquity. Hegel argued that the Hindu people were utterly sunk in the depths of an unethical life. They did not have any freedom, humanity, morality or understanding of God. [3] Clearly, an insensitive ignorance of karma, dharma, nirvana, nishkama karma, anekant-vaada, etc.

These were not some random thinkers. Hegel, Kant and Locke count among the most influential of thinkers of all time. However, none of them provide any sound syllogism to base their claim on. Their arguments for the pre-eminence of monotheism proceed by way of analogy and not logic. Fallacies like begging the question, circular reasoning, appeal to authority, straw man, etc. are central to their claim of superiority of one-god-ism.

Monotheistic chauvinism was commonplace when Christianity first encountered the so-called Third World. Later, Islam, a more fundamentalist form of monotheism advanced the very notion more aggressively in furtherance of its political agenda. Monotheism was the norm, polytheism the primitive, undifferentiated other.

Truth was the exclusive trademark of these religions and was revealed to humankind once and for all via prophet(s). The many-god-ism was easily stereotyped as being a result of benighted intellect. Lies continued unabated even when the invaders and colonisers encountered much-advanced civilizations like China’s.

Narratives were adjusted but the basic premise of the superiority of Abrahamic religions (viz., Judaism, Islam, Christianity—major monotheistic religions) remained the same. As Homi K Bhabha theorizes that ambivalence and mimicry are central to stereotyping [4], this religious stereotyping too was replete with lies, ambivalence and equivocacy.

When justice, morality, liberty and reason are so narrowly and arrogantly defined then it becomes alright to enforce this sense of justice, often violently. Pagans, heathens, idolators and polytheists (monotheists’ choice of words for all others) need to be rescued, often from themselves. Since a particular view of looking at God has sanctioned it, what otherwise is a crime against humanity becomes a sacred duty.

Mass murders, religious persecution, rapes, enslavement, temple-breaking, books burning, etc., are glorified as Holy War. Fanaticism aside, religious colonialism is sought to be (and continues to be) enforced on the benighted non-believers. An example is Indian Subcontinent, especially parts west of river Indus (i.e. Pakistan and Afghanistan as well as Kashmir), that was once an expansive theatre of incredibly rich practices & faiths and vastly superior ancient civilization, but was reduced to a theatre of unspeakable crimes against humanity by Believers’ (God’s?) army. Over time, the people who were once the victims of Arab colonialism began singing praise of the very same alien faith. V. S. Naipaul narrates his experience of this very alien Arab colonialism as the following[5]:

Colonization results in deracination of self and identity, and a long-term hurt to collective psyche. The language is twisted to make a case for religious colonialism. Early Christians used the word “pagan” to describe anyone who refused to recognize their Only True God. The Latin roots of the word pagan carries the sense of a “village slacker” or a “country bumpkin”. But is monotheism really superior to or has independently originated from paganism?

Are their sacred books really word of God, and therefore superior? Evidence says no; belief is another matter. Monotheism pronounces its existence to revelation but actually builds on primary religions and yet denounces them as paganism, idolatory and superstition. [6] Ibn Warraq, writing about origin of Islam, a monotheistic religion, in Why I am Not A Muslim, argues [7]:

Muhammad was not an original thinker: he did not formulate any new ethical principles, but merely borrowed from the prevailing cultural milieu… And yet Muslims in general continue to hold that God is the source of Islam—to find a human origin for any part of it is not only vain but also meaningless and, of course, blasphemous… Perhaps Muslims have the unconscious fear that if we can trace the teachings of the Koran to a purely human and earthly source, then the entire edifice of Islam will crumble. But as Renan used to say, ‘Religions are facts; they must be discussed as facts and subjected to the rules of historical criticism.’ ” [99]

This derivation from polytheism is evident in the basic vocabulary of these secondary religions. The most popular Islamic name for God, Allah, owes itself to pre-lslamic literature where Allah is mentioned as a great deity.[8] “We also have the testimony of the Koran itself where He is recognized as a giver of rain, a creator, and so on; the Meccan’s only crime was to worship other gods beside Him. Eventually, Allah was only applied to the Supreme Deity.”[9] The same is true for Yahweh, Hebrew name of God used in the Bible.

“Yahwism was neither the original monotheism nor originally monotheistic; it represented neither the beginning nor the end of the evolution of monotheism, but instead an important rung on a boundless ladder.” [10] Elohim, another name of God in Judaism, itself means gods and not God. Interestingly, the very word ‘God’ itself owes to polytheistic roots. The root of the present word God is the Sanskrit word hu or huta or hotṛ which means to call upon, invoke, implore. Nonetheless, it is also interesting to note the strong similarity to the ancient Persian word for God which is Khuda. [11] God is that who is invoked. And in the Sanskrit Vedas, you not just invoke God but gods too.

Richard Dawkins opens his book The God Delusion with the following lines [12]: The God of the Old Testament [monothesistic version of God] is arguably the most unpleasant character in all fiction: jealous and proud of it; a petty, unjust, unforgiving control-freak; a vindictive, bloodthirsty ethnic cleanser; a misogynistic, homophobic, racist, infanticidal, genocidal, filicidal, pestilential, megalomaniacal, sadomasochistic, capriciously malevolent bully.

A revealed religion and a transcendent god do not represent natural proclivity of human curiosity to understand the Supreme Being. Nor do they equip one to deal with emotional and difficult existential crises/issues. Therefore, they need to be ‘enforced’ on non-believers in the name of the stamp of approval from prophet(s) and God.

The theories of justice, reason, etc. are distorted to accommodate these premises. The Holy War has a stamp of approval from no less than God Himself. Polytheism, on the other hand, is a human cultural norm; primary and original expression of faith; in fact, the very term “polytheism” may not fit well as Jordan Paper argues [13]:

It is quite evident that the assumption that monotheism is somehow superior to alternative modes of beliefs is shaky. This assumption that there is only one true god and that all other gods are false has caused more violence in history than either world wars or any other upheaval.

The stricter the version of monotheism, the more horrifying has been its espousal. I shall like to conclude the article with the following words of Page duBois [14]:

There have been many polytheisms, both extinct and flourishing, and they do not, as some fundamentalist monotheists might suggest, fail any more than monotheisms in the domains of ethics, theological sophistication, and a politics engaging tolerance of others. Polytheism is characteristic of many traditional cultures, and a loyalty to many gods can mark resistance to colonization and its demand to convert, to accept the conquerors’ one god and abandon the deities, the ancestor-gods, and the ancestors. The prejudice against conquered peoples’ religious practices, be they animism or polytheism, has often been linked to forms of racism, the view that phenotypically different human beings are racially inferior, their skin color along with their religions markers of primitivism and backwardness. Conquest and sometimes brutal and relentless religious conversion are justified as means to rescue such benighted souls from their darkness, to draw them into the security of the imperial embrace.

In the next article, I’ll examine the reasons behind the resilience of India and its traditional faiths/religions that saved them from getting extirpated in the face of a severe monotheistic chauvinism first from the medieval Islamic invaders— so severe that the Belgian orientalist Koenraad Elst categorized its magnitude same as that of Nazi extermination policy— and then from the Portuguese in form of Goa Inquisition.