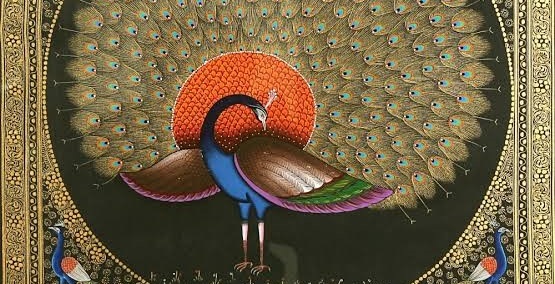 Most motifs used in Indian art served more than one purpose. They were not merely means to decorate a fabric or a surface, but also had a deeper, symbolic meaning. Some motifs were harbingers of fertility and prosperity to the wearer, while, some like the Vyala and Gandabherunda served as protective charms, warding off evil. Motifs like the peacock reflect stories from our scriptures. The peacock is also a symbol of our deep communion with nature as a civilization. The peacock possesses grace, beauty and symmetry that has made it a favorite of the artists across India for more than five millennia!

Yapperungalam, a 12th century text on Tamil prosody, written by a Jain monk Amritasakaran, describes the city of Kanchipuram as peacock shaped with the Varadrajaswami Perumal temple as the head of the peacock, while Siva Kanchi forms its body. 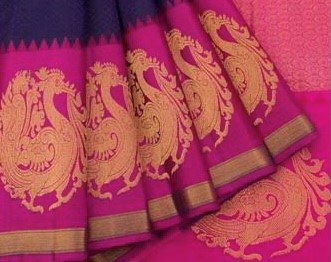 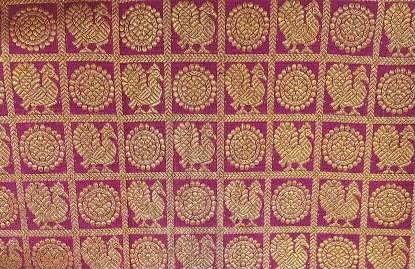 In the Paithani saree of Maharashtra, the peacock motif occupies a pride of place, with the bangdi-mor design, or the peacock inside a bangle design being the most prized one as it is the most complicated motif to weave. 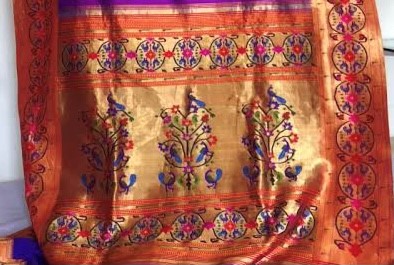 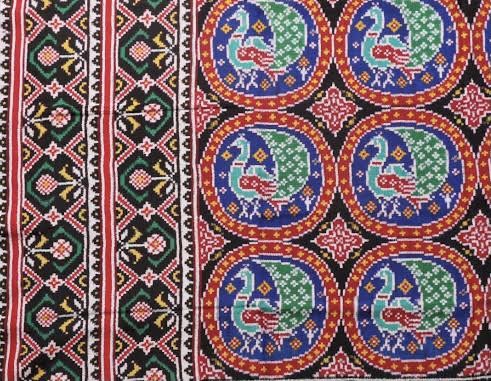 In the famed double ikat Patola of Patan, the peacock is often featured in combination with other motifs like the parrot, the elephant or a butterfly. A design called MorPatangyaBhat features alternating peacock and patangya or butterfly motif. A dancing peacock symbolizes coming of the rains and prosperity, while the butterfly symbolizes beauty. In another design called the PopatMorBhat, parrot and peacock are alternated. Parrot is the symbol of beauty and peacock is the symbol of fertility and prosperity. 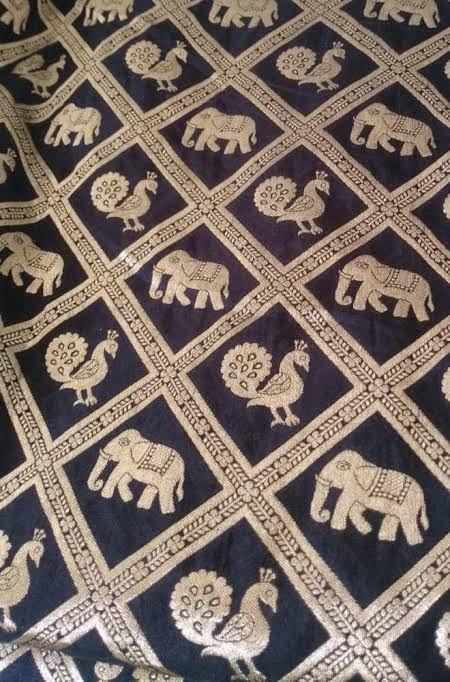 In the brocades of Banaras, where geometric, floral and abstract motifs were preferred over animal motifs by the mainly Muslim weavers, the peacock continued to be a favored motif, especially for borders, due to its beauty, grace and magnificent plumage.

As seen earlier, the peacock has been an integral part of the artistic traditions of India. It signifies beauty, royalty, love, rebirth and passion. The peacock motif has been widely adopted as a motif in the various embroidery techniques used in different parts of India. In the phulakari embroidery of Punjab, the peacock is often embroidered on the dupatta of a new bride. 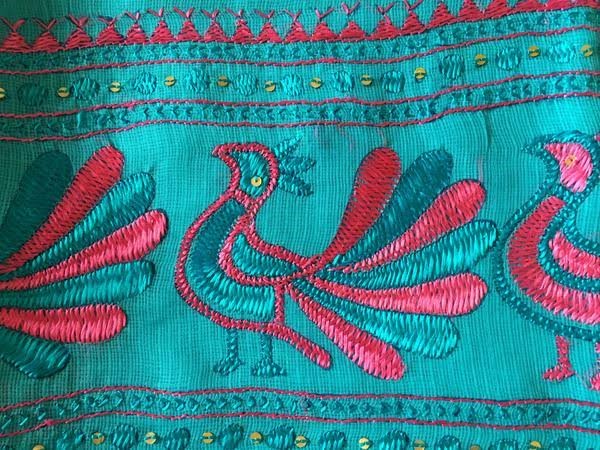 In the embroidery of Karnataka, a geometric peacock is often used on the sleeves of a young girl’s blouse and on the pallu of a saree of a new bride, as it is a motif strongly associated with beauty and passion. 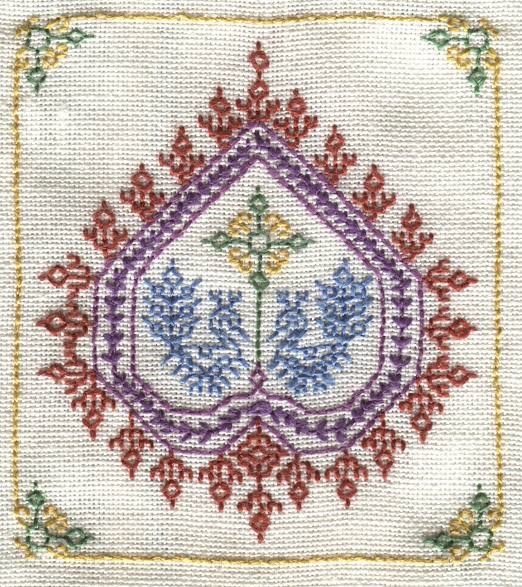 In the Rabari embroidery of Kutch, the peacock motif is often embroidered with mirrors to decorate the lower hem of the ghagro or the skirt of women, so that when the skirt catches the sunlight, the motif sparkles like diamonds. 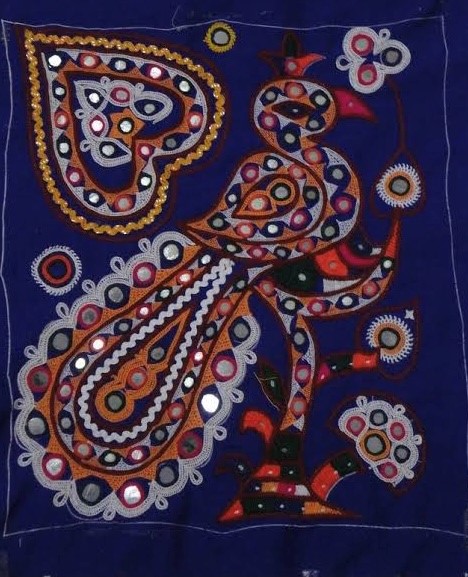 In the Kantha embroidery of West Bengal, simple running stitches are used to embroider the peacock motif. 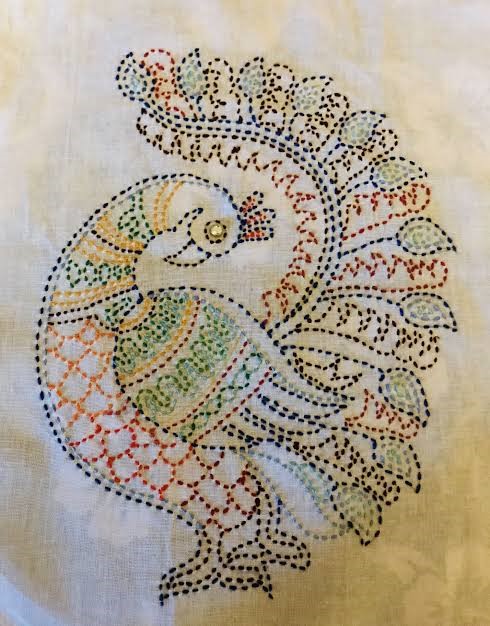 In the zardozi embroidery much favored by couturiers these days, the peacock is favorite motif used to decorate everything from blouses to lehengas. 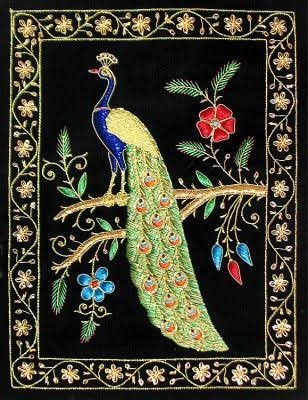 While the peacock was considered a sacred bird by the Hindus, Jains and Buddhists, the Islamic rulers of India were enamored by the bird because of its sheer beauty. In Islamic art, the peacock became the symbol of luxury, decadence, wealth and royal pomp.

Emperor Shah Jahan built himself a Peacock Throne. The throne was fashioned out of solid gold encrusted with rare jewels like rubies, garnets, pearls, emeralds and diamonds. Two magnificently carved enameled peacocks crowned over the canopy of the throne. French traveler to India, Tavernier who had an opportunity to see the throne had valued it at six million pounds sterling at the time. The Peacock Throne was later carried away as spoils of the war by Nadir Shah of Iran. 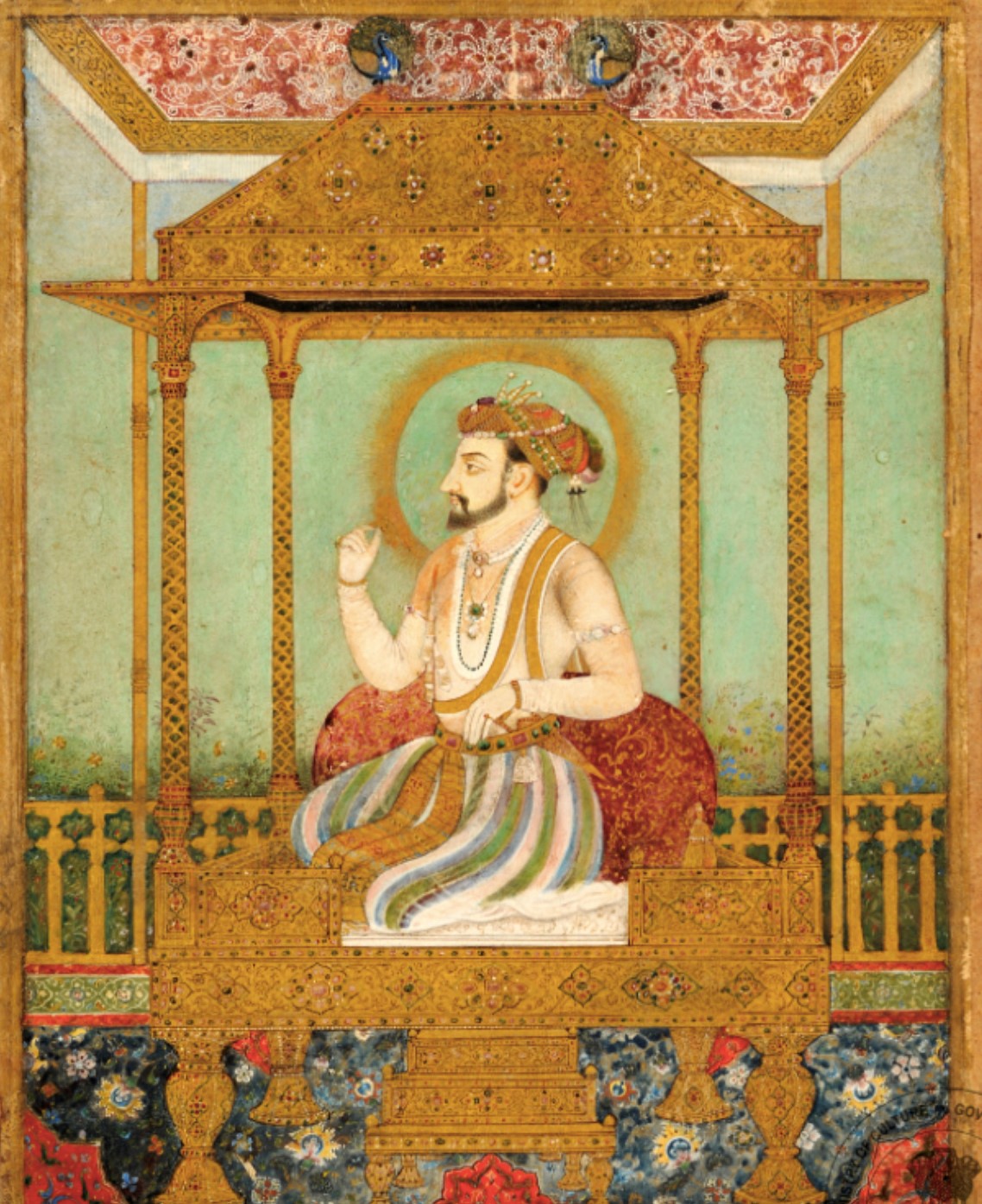 The peacock was a favored motif used frequently in Islamic architecture, despite the religious taboo against using animal motifs. Even today, you see the peacock as a motif decorating many Indo-Islamic buildings. 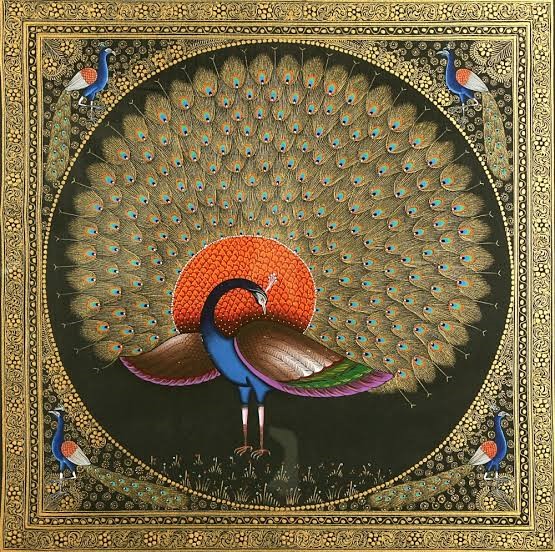 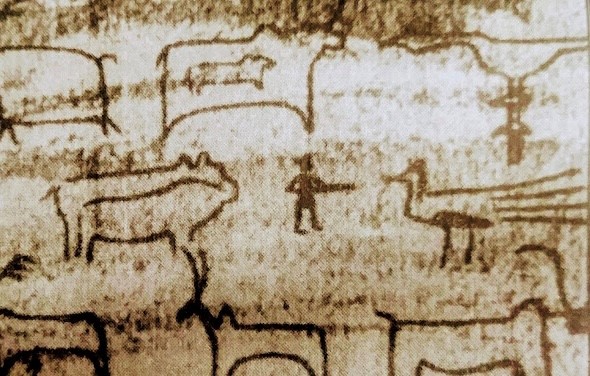 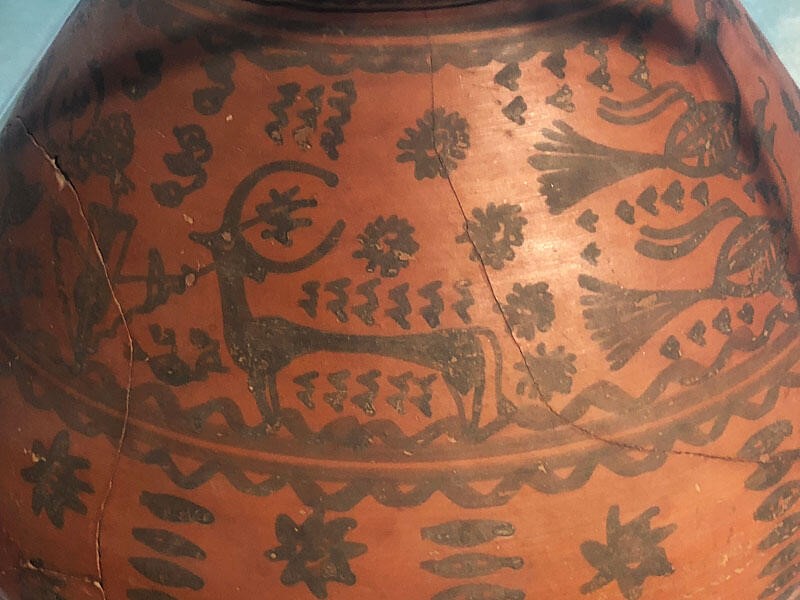 Some archeologists like M S Vats believe that this was burial pottery and these human figures inside the peacock’s body represent the ‘sukshmasharira’ i.e the microscopic ethereal body of the dead, which these birds are supposed to transport to the other world. The peacock, thus, becomes a symbol of rebirth.

The peacock features frequently in Indian miniature paintings as a part of the scenery, especially in the Ragamala painting series. RaginiKakubha and RaagMalhar are especially depicted with a pair or more of peacocks flanking the anthropomorphic figures of the Ragas and Raginis. 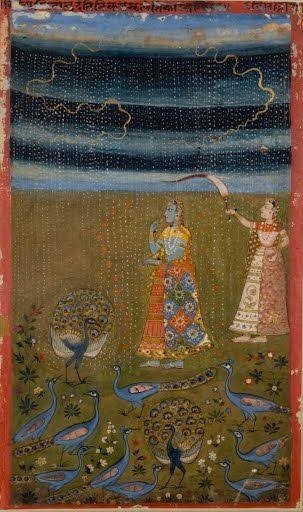 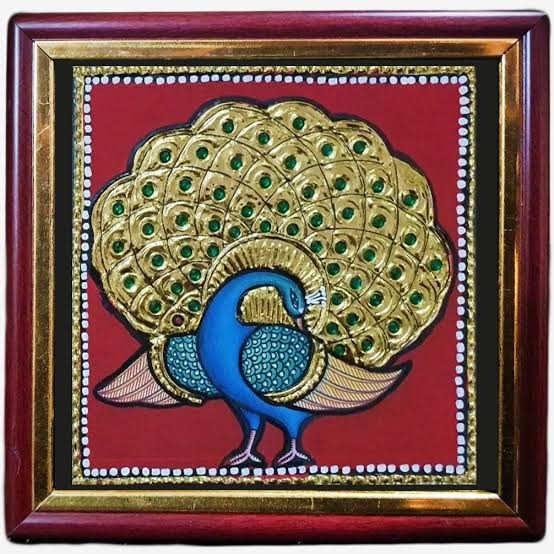 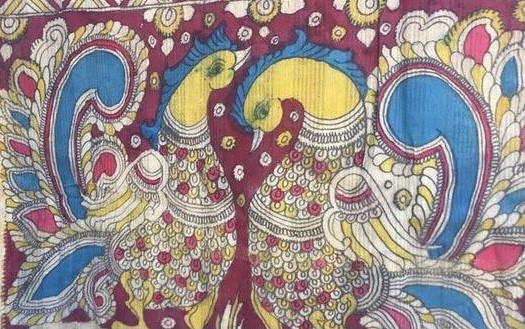 The peacock is painted often in the Kalamkari art of Srikalahasti, where it is considered a symbol of peace, passion and prosperity.

Peacock is a favorite motif of Indian craftsmen who create objects out of metal. The brass lamp makers of Thanjavur in Tamil Nadu create a special lamp called Mayil Vilakku that is used for the worship of the Divine. The Dhokra artisans of Bastar cast brass boats that are shaped like a peacock’s tail to illustrate Shri Ram’s crossing of the Sharayu river. The peacock being a sacred motif, provides the sanctity for objects that are meant for worship. 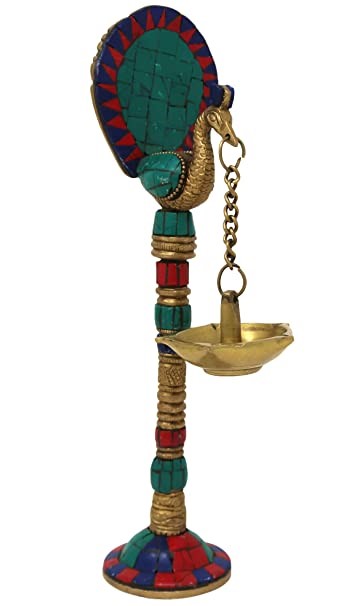 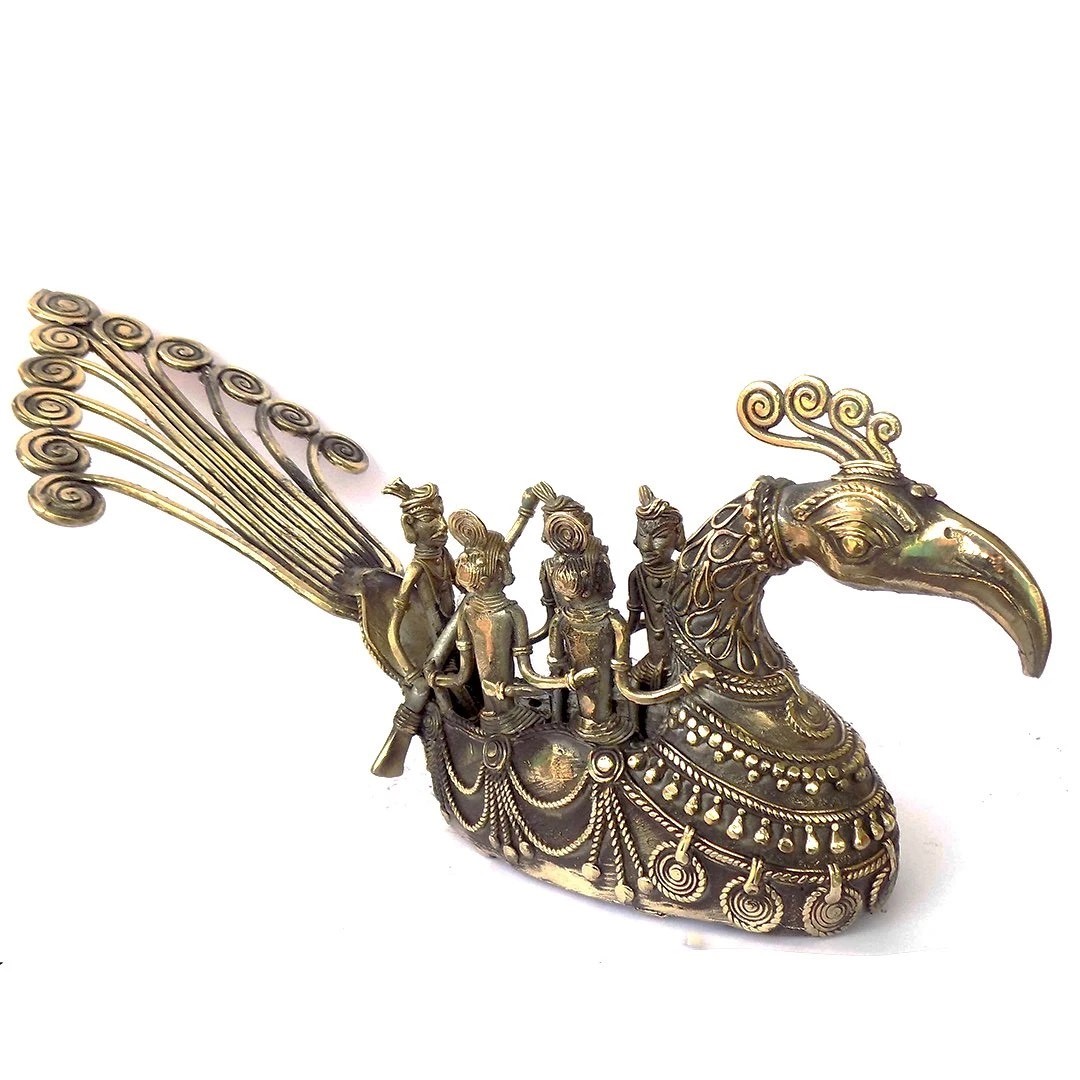 The Mori clan of the Bhils of Central India, worship the peacock as their ancestral totem. The Gonds revere the peacock and often paint the bird under the tree of life as a symbol of prosperity and fertility. 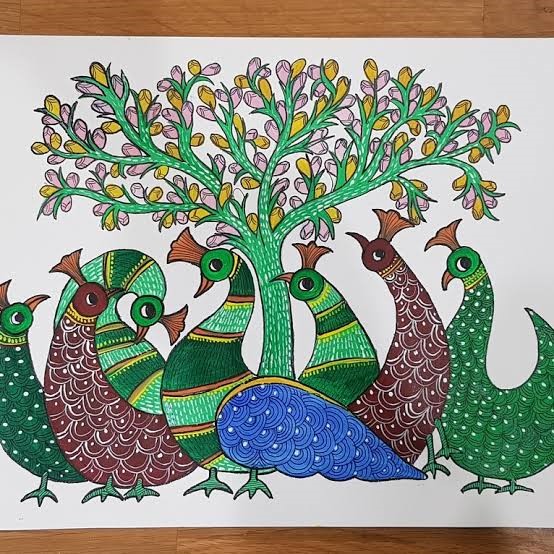 The Warli tribe of Maharashtra associates the peacock with their deity, Hirva, who is the Lord of forests, nature and all sentient beings. Warli paintings often feature the peacock exhibiting its full plumage. 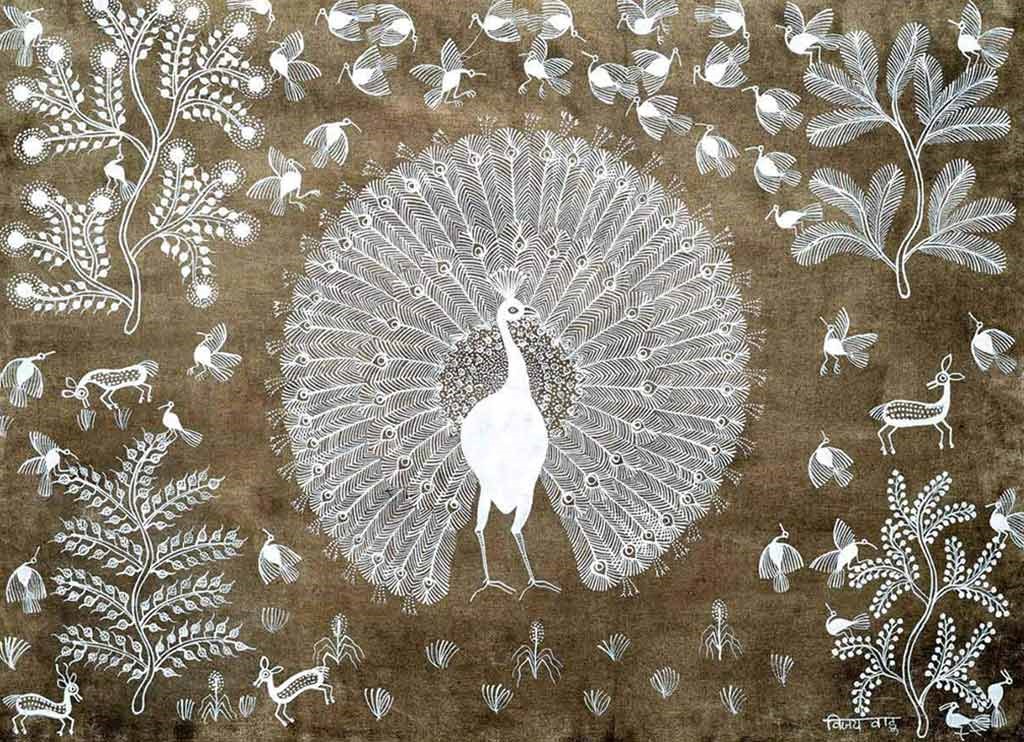 Contemporary fashion in India is incomplete without the peacock motif. 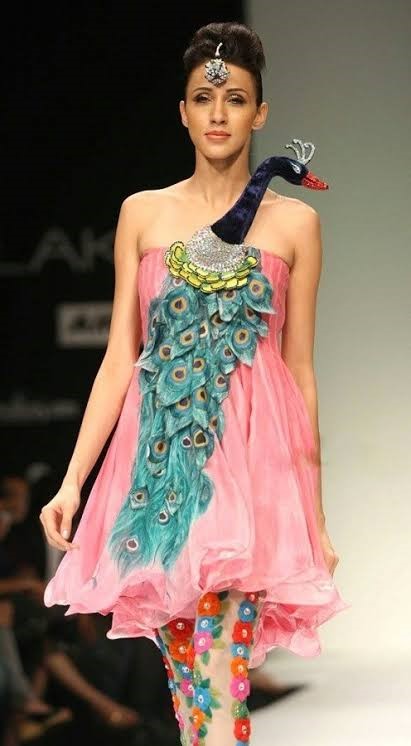 You can see the peacock motif in jewelry, in high street fashion, in Mehendi tattoos as well as in accessories like footwear, handbags and other objects. Peacock is perhaps the only motif that enjoys such a wide application in Indian fashion and contemporary culture. 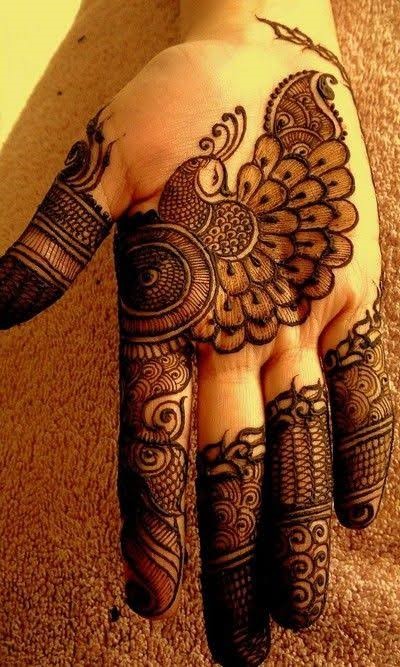 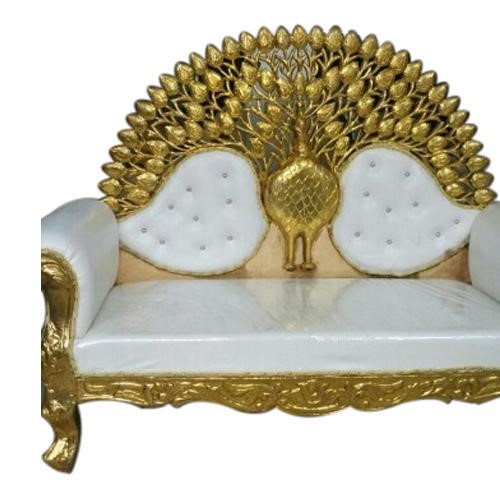 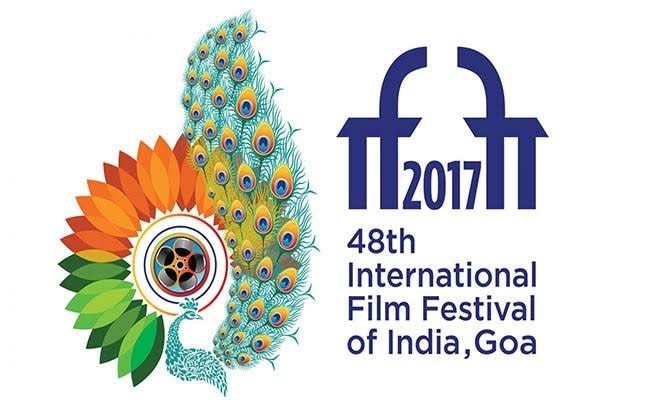 The peacock is a favorite motif of truck owners. Seldom will you see a truck in India that doesn’t have a floridly painted peacock on it. Truck drivers believe that that peacock brings them good luck and keeps them safe from road mishaps. 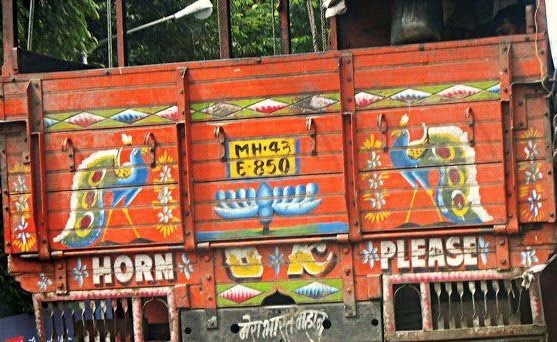 From the prehistoric cave paintings of Bhimbetka to the contemporary folk art on the back of trucks, the peacock has been one enduring motif that has been present in Indian art scene for thousands of years. The history of Indian art and culture is the history of the national bird of India, the beautiful peacock. The peacock crossed Indian borders to attain global popularity, but it remains an enduring symbol of the Indian civilization.

Kadgaonkar, Shivendra – The Peacock in Indian Art and Literature, Bulletin of the Deccan College Post-Graduate and Research Institute