Jiva and Brahman – a Vedantic perspective 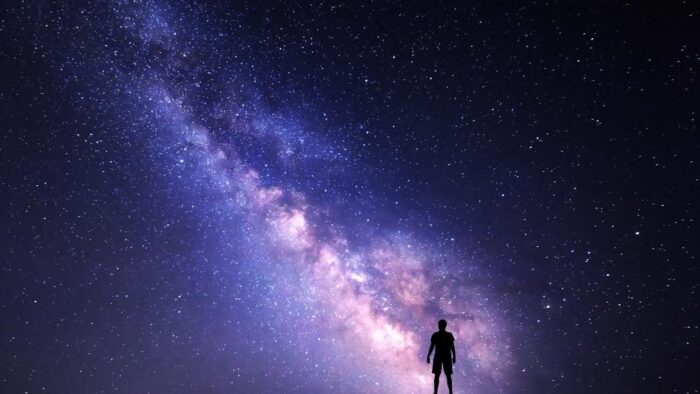 A typical answer when asked this question is, ‘Yes, I am aware’.

I can move around, do physical action. I can sense and perceive the objects around me – I can see, smell, hear, taste and touch. I can sense the motion of my breath and pulse. I can think, feel, understand and reason out through my mind and intellect. So, ”Yes, I am aware.’

So is this awareness a pure consciousness or what we know as Brahman?

A person with some level of exposure to Vedanta would say, ‘Yes – I can observe my body, my prana, and even what goes in my mind and intellect, and hence I am aware. This awareness may not be my permanent state, but it is the pure consciousness.’

The Upanishads say, ‘No’,

The Kena Upanishad points out,

Let us try and understand this further.

Swami Vivekananda said, “In one sense Brahman is known to every human being; he knows, ‘I am’; but man does not know himself as he is.”

The awareness which we think we are, is not the pure consciousness. What we experience as awareness is the Reflected Consciousness, which is the awareness in our minds, and goes by different names such as Chitchaya or Chidabhasa.

Consider this example, at night when there is no sun, the sky gets lit up with moonlight. We all know and have read in school that the moon does not have light of its own, so how does it light up the sky?

It can do so because the moon has the ability to reflect the light of the sun. The moon reflects the sun’s light and illuminates the night sky with a beautiful moonlight. To an observer, the moon appears as a self-luminous body, but in reality it is not.

Similarly, our minds, though insentient and inert, have the ability to reflect the pure consciousness on account of its very subtle nature, and hence appear sentient.

Now if there is a borrower, there must be a lender. So who can lend consciousness? Only that which is sentient – the Atman, the Self, the Witness, the Pure Consciousness, which is our true self and the non-material principle (Chidrupa).

The mind borrows consciousness from the Atman and appears as sentient or alive. It is on account of this borrowed consciousness that the mind is able to perceive objects through the senses, command the functioning of organs of action (Karmendriyas), think, feel, understand, will, analyse, and so on and so forth. This delimited reflection of the eternal consciousness in the mind-stuff (Antahkaran) is called Reflected Consciousness (RC). The Reflected Consciousness assumes a reality to itself and develops a notion of “I” and is called the ‘Jiva’. Thus the Jiva is a label given to consciousness, defined by the principles constituting individuality. It denotes the embodied being limited to the psychological and physical states.

The basis of the Jiva is Brahman, which is the substratum of all creation, but the arrogation of reality to itself by each form of the reflected consciousness becomes responsible for the notion of the ‘I’ in everyone. The Jiva, tremendously influenced by its perception of objects and through repeated mental conditionings, confers an objective reality to this world. Perception, inference, doubt, sleep, memory, and the forms of error such as ignorance, egoism, likes, dislikes and the fear of death together with an intense love for life, are the principal psychological associations of the Jiva. 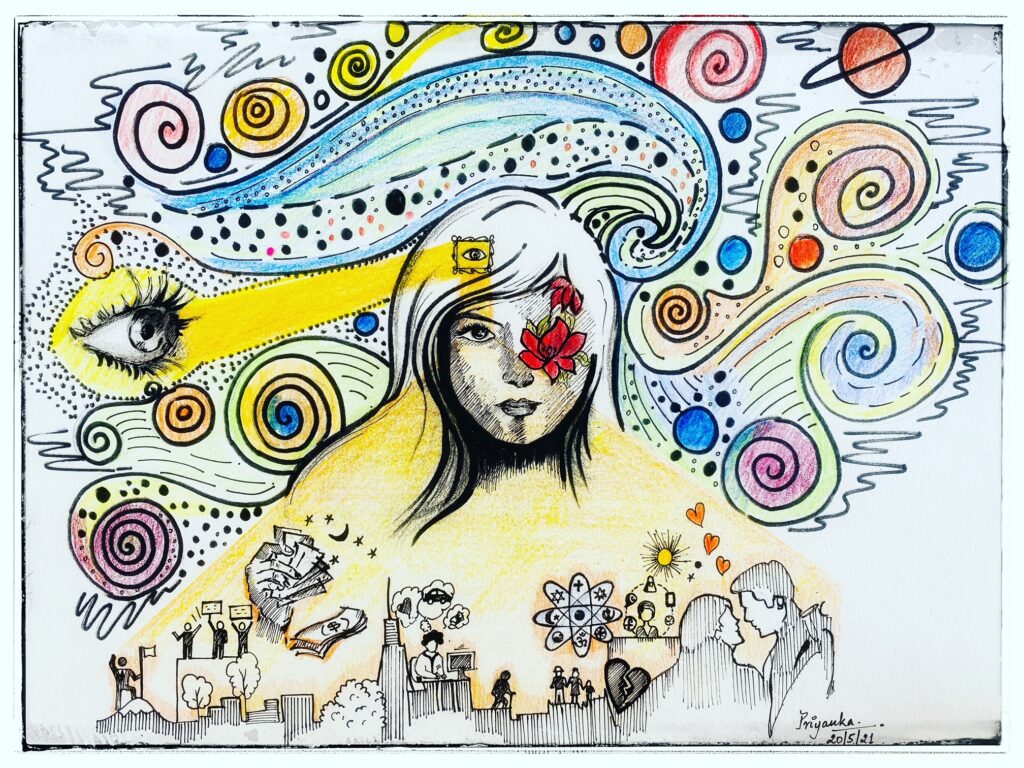 Let us understand this with an example of a mirror. A mirror, as we know, is a reflecting surface. When you see yourself in the mirror, what you see is a reflection of your true self. Your mind, in a similar way, acts as the reflecting medium just as the mirror, and reflects ‘You’, the pure consciousness or Brahman. The reflection of Brahman is the Reflected Consciousness or the Jiva which just appears as sentient, but in reality is not. You as the subject, the Atman, the witness, can never see your original self, but only your reflection which forms in the mind, just as eyes can see everything except themselves.

Though the Jiva appears as the subject, the seer, the experiencer, it is not really the metaphysical subject. It is a limitation (Pariccheda) as well as a reflection (Abhasa) of Brahman. As restricted to the body, the senses, and the mind, it is Parichhinna or limited, and as an image of the highest consciousness, it is an Abhasa.

Brahman cannot be experienced for if it is experienced it becomes an object and there is someone who is now experiencing it, and so, one has to go beyond the faculty of mind to realise Brahman. It is like deep sleep – one who says I am sleeping is not really sleeping.

Relationship of Jiva and Brahman

The Reflected Consciousness with the notion of “I” or ego is the Jiva.

Let us try and understand how under the influence of ego, the Reflected consciousness identifies with the Brahman or the Self.

In this life process, the ego develops three types of connections – first with the Reflected Consciousness (RC), second with the Body, and the third with the Pure Consciousness.

The Reflected Consciousness (RC) when confers a reality to itself, becomes completely identified with the Ego. Just as a ball of iron heated in a furnace becomes red hot by acquiring the element of fire and iron, similarly the RC identifies with the notion of “I” (ego) and seems to be one and the same, which we know as Jiva.

Thus the relationship of the Ego with the RC is Sahaj or natural. Just as the mirror and the reflected face have a natural connection – the moment there is a mirror, there is a reflected image. So, as long as there is a mind/ego (Antahkaran) there will be RC.

The second connection that ego has is with the body, and the nature of this connection is born out of Karma (KarmaJanma). According to the law of Karma, each body is a result of its past Karma. The body continues as long as there is Karma, and if the body continues, the ego will be connected to the body.

When the physical or gross body dies, the subtle body along with the notion of individuality (Jiva) transmigrates to take up another body and says, ‘Now I am this body’. It continues to exhaust previous karma in the new body and in effect also generates fresh karma. Thus the cycle of birth and death continues as long as there is clinging to individuality and the idea of doership and enjoyership born out of desires exists in the mind of the Jiva.

Ego is just a notion born out of ignorance. It is a delusion. The Yoga Vasistha, a powerful text of Vedanta, says there is nothing apart from Brahman or Self. Even if one assumes the substantially of the world to be real, there is no relationship between that and the Self. The senses function as senses, the mind exists as mind, and the body as body; Pure Consciousness is untouched by any of these.

How to cut these relationships and realize Brahman

The second relationship between the ego and the body can be cut off only by exhaustion of Karma. It’s a zero sum game. When the balance sheet of Karma and its effects are balanced out, the body will cease to exist.

The third relationship between the ego and the Pure consciousness is what matters. It is born out of ignorance and hence can be cut only by Knowledge – the knowledge of the Self, of who you really are. In reality there is no connection. The Jiva in essence is not different from Brahman.

There is the same inexplicability about the relation of Jiva to Brahman as of Brahman to Maya, and appearance to reality. As long as the delusional concept of doership and enjoyership exists in the Jiva, and there is clinging to individuality, Jiva will remain separate from Brahman and in the transmigratory process of birth and death. Once this notional individuality is dropped, the Jiva merges with Brahman.

The Atman or the witnessing Self is the ground of the Jiva, though in itself it is absolutely free from the ignorant limitations of the Jiva. The ignorance is of the mind which is a result of mental conditionings. These conditionings or constructs of mind are like layers and layers of dirt and muck that accumulate on top of the mirror such that the reflected image becomes blurred. It is when the dirt is removed by polishing the mirror (purifying the mind) that the self shines bright through it. Thus, when the limiting conditions are withdrawn, the Jiva turns back to its source, the Brahman, which is the light of eternity.

Note: Pure Consciousness, Brahman, Atman, Witness and Self are the same and are used interchangeably in the article. 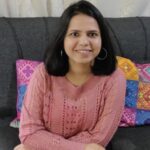