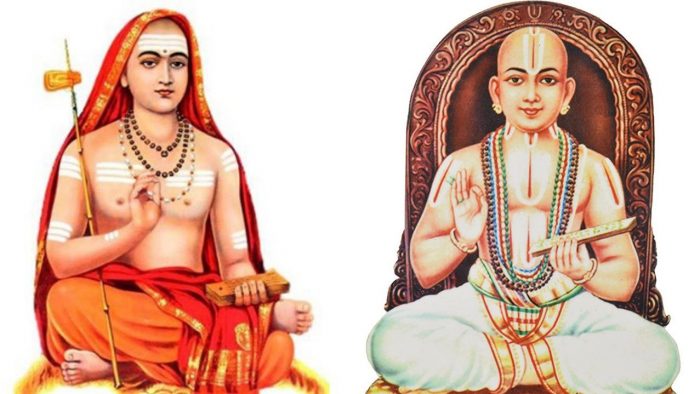 The Iśā Upaniṣad is one of the most widely known Hindu scriptures. Being one of the eighteen Principal Upaniṣads, and a part of the Prasthāna trayi, it enjoys a central place in Vedānta literature, and has been commented upon by ācāryas in all the great Vedāntin traditions – the most prominent among whom are Śaṅkara, Mādhva, and Vedānta Deśika.

This article is an attempt to dig deep into this short poetic Upaniṣad, with the assistance of the commentaries of two great Vedāntins –

This comparison is worth undertaking as it illustrates the deep philosophical differences between the two Vedantic schools, particularly in relation to the attitudes of the two āchāryas towards the role of Karma and Jñāna in aiding liberation. Are the routes of Karma and Jñāna mutually exclusive, or can we combine them to advance towards self-realization?

Ādi Śaṅkara and Vedānta Deśika address this conundrum very differently as we shall see by studying their commentaries on select verses from the Iśā Upaniṣad.

So, what are the eighteen verses about? Mysore Hiriyanna in his 1911 work on Iśā Upaniṣad (working with Śaṅkara’s commentary on the Kanva recension) thinks of this small work as comprising of four parts. I am paraphrasing him below –

Verse 1: Directed to those who are capable of true Jnana and withdrawal from the world to realize Brahman (the True Self)

Verse 2: Directed to those who cannot seek the Self as suggested in Verse 1, and hence the emphasis for them is to engage in Karma.

Verse 3-8: Describes the nature of the True Self. These verses are directed to the same audience as Verse 1

Verse 9-18: Commends the simultaneous practice of Karma and upāsanā for persons referred to in Verse 2.

But this particular organization is something that is in line with Śaṅkara’s Bhāṣya. Not necessarily with that of Vedānta Deśika.

Before we get to the verses, let us briefly examine how Śaṅkara and Vedānta Deśika introduce the Upaniṣad.

The introductions are strikingly different. One thing to note about the introductions is that both commentators are conscious of the uniqueness of this Upaniṣad – in that it is a concluding part of a Samhita text, unlike other Upaniṣads. It forms the 40th chapter of the Vajasaneyi Samhita of Shukla Yajurveda – a text that deals primarily with the performance of various karmas and sacrifices.

So how does Śaṅkara introduce the Upaniṣad? Despite its association with Samhita, Śaṅkara urges us to view it as a mainly philosophical text, that should not be used in any Vedic ritual. I quote from his introduction –

“The verses beginning with Īśāvāsyam are not utilized in ritual, since they explain the true nature of the Self which is not subsidiary to karma.”

“The true nature of the Self, as will presently be indicated, is purity, taintlessness, oneness, permanence, bodilessness, omnipresence and so forth, which being inconsistent with karma, it is only right that these (verses) are not used in ritual”

Having said that, we do see the 18th verse of the Upaniṣad (shared below), used in Vedic ritual in our times, at the time of pradakshina around the sacred fire.

Vedānta Deśika, who comes from a very different spiritual lineage (that of Rāmānuja), states in his introduction –

“All (actions) prescribed in the Samhita could be utilized on account of separate injunction for knowledge; this addition (anuvāka) at the end of the Samhita is for pointing this out clearly”

So while Deśika is not spelling out if the verses that follow can be used for ritual, he is not making a very clear distinction between the seeking of Self (Jnana) and Karma – in a manner that Śaṅkara does. The “Action vs Knowledge” dichotomy is less evident in Deśika’s bhāṣya

Translation (Swami Lokeshwarananda): In this changing world, everything is subject to change, yet everything is covered by the Lord (Iśā). Practice renunciation and be strong in the consciousness of the Self. Do not covet the wealth of others

What is Śaṅkara’s take on this verse? As reproducing the bhāṣya can be a long read, let me make an excerpt (with Hiriyanna’s translation)

“The Lord is the Ruler and the real Self of every creature”
“By one’s own Self,— the supreme Self—which is the sole reality, all these unreal (things), both movable and immovable, have to be covered over”

“Just as bad odour in a piece of sandal, arising from moisture, is overcome by true fragrance when the (sandal) piece is rubbed, so will all the variety of the world, superimposed on Self, disappear at the perception of the (one) really existent Self”

“What a person, that is so full of the conception that the Lord is the Self of all, ought to do is to renounce the three-fold desire for offspring etc., and not (be engaged in) karma. In tena tyaktena, tyakta means renunciation”

So what do we gather from Śaṅkara’s comments above? We notice a very strong non-dualistic orientation as one would expect from Śaṅkara. We also notice Śaṅkara saying that the one who indeed seeks to realize the true self must renounce desire and not engage in Karma.

What is Vedānta Deśika’s take on this verse? Firstly we note that Deśika differs from Śaṅkara even in the interpretation of the first two words of the verse – “īśāvāsyam”. While the Lord in Iśā is interpreted by Śaṅkara as the true Self – the one unitary Brahman that is the ultimate reality, Deśika views Iśā differently.

Īśā : Implies the all controlling Puruṣottama, entirely different from the individual soul. As evident from the Śvetāśvatara Upaniṣad which talks about the distinction between the “knower and the ignorant”, “the Lord and the non-Lord”

Vāsyam : Implies that which is “fit to be pervaded”

Unlike Śaṅkara who views vāsyam as the veiling or covering of all the unreal things in the world by the Supreme self (sole reality), Deśika discusses how Puruṣottama dwells everywhere , and also how everything dwells in him.

This is interestingly reminiscent of the first two names in the Vishnu Sahasranāma – viśvam and Viṣṇu. The interpretation is also in line with Sri-Vaishnava philosophy that views the “real” universe as a part of the Supreme soul’s body. (Śarīra ātmā bhāva)

Deśika agrees with Śaṅkara’s understanding of renunciation, but unlike Śaṅkara he does not contrast renunciation with Karma, nor does he state that the seeker of the true self must not be engaged in Karma. So it is a very distinct interpretation.

Now let’s move to Verse 2 of the Upaniṣad.

Translation (Swami Lokeshwarananda): A man may wish to live for a hundred years, performing his duties as prescribed in the scriptures. If you do your duty this way, then the results of the work you do will not cling to you

“Do you not remember the aforesaid antithesis between jñāna and karma?
The man who seeks to live must perform karma and the man who does not, must give up all desire. There are two paths – the path of activity and the path of withdrawal. Of these two, renunciation is higher (citing Taittirīya Āraṇyaka)”

So Śaṅkara is making a distinction not just between the “path of activity” and the “path of withdrawal”, but is also saying that these two paths are for different sets of Jivas. The Jivas who seek true realization must pay attention to Verse 1. And those who are not capable of it and seek to live, must engage in Karma.

Deśika’s take is radically different. Let us do an excerpt –

“Now, if it be asked, will there not accrue bondage to the knower of Brahman, since there is the performing of action (karma), the teacher says – “Action does not get smeared over man”.

“Brahma vidya is so powerful so as to prevent any action from staining man, and therefore no expiation is needed, but what is established in the case of those who practice brahmavidya, is that the only sins which do stain them are those performed inattentively”

Again it is a striking contrast. Deśika is not exhorting the brahman-seekers to refrain from Karma, but is only rebuking selectively against karmas performed without care / attention.

So the first two verses which set up the rest of this Upaniṣad are remarkable in the degree of variation in interpretation that they have provoked. Now let us look at a third verse (Verse 15), among the remaining 16, to round up our analysis.

Translation (Hiriyanna): Truth’s face is covered with a golden lid; remove that, O Pūṣan, so that I, Truth’s devotee, may see It.

This is perhaps the most popular verse in Iśā Upaniṣad that is very widely known in India today. Largely because of the famous Surya namaskāra āsana – a very popular Yoga āsana that begins with the chanting of this verse. It belongs to the concluding section of the Iśā Upaniṣad, the section that consists of upāsanas.

“The Brahman residing in the solar disc is covered by a seemingly golden lid. O Pusan, remove the lid for me, who is meditating on you – the Truth”

So Śaṅkara bhāṣya on this verse is pretty brief.

Deśika has a bit more to say on this verse. To him, the golden vessel (hiraṇmaya pātra), is a vessel full of rajas (passion) and rāga (attachment) which obstructs activities related to the Supreme Self.”

Deśika also describes “golden” not as denoting a color, but as denoting a group of “enjoyable things” which are dependent on action (karma). Also interestingly Deśika totally discounts the mention of Pusan and gives a metaphorical commentary where the verse represents the need to conquer the tendencies towards “rajas” that exists in all of us.

One hopes this discussion of three of the eighteen verses in Iśā Upaniṣad, gives a good flavor of the import of this most philosophical of all Hindu texts. The fundamentally different treatment of the Upaniṣad by the two great preceptors on the issue of karma- jñāna samuccaya tells us that the dichotomy between the “path of action” and the “path of contemplation / knowledge” is an age-old one, which belies an easy resolution.

A study of this Upaniṣad with the assistance of the two bhāṣyas reminds us of the remarkable intellectual diversity in this country even among Vedāntins.

We thank our consulting editor Surendranath C. for the contribution of this article. 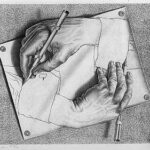