Indology: The Origins of Racism in the Humanities – Part 2 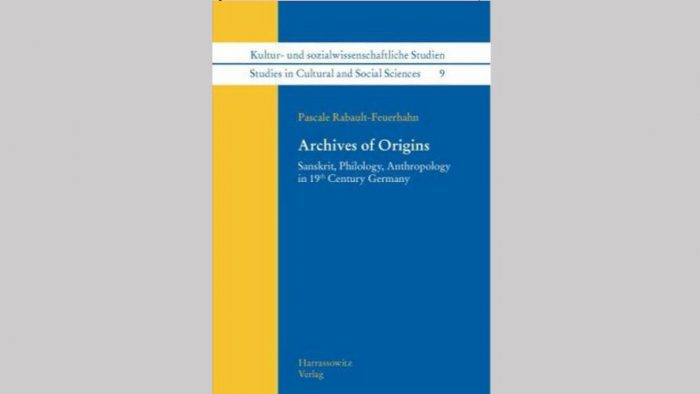 The Attempted Rehabilitation of Indology

In The Aryan Myth (1971), Léon Poliakov famously claimed that “the division of the European population into Aryans and Semites was originally based on a confusion about the nature of men (races) and their culture (languages)” (Poliakov 1996 [1971]: 2). He argued that, mediated via comparative philology and Indology, German strivings for nationhood and the Enlightenment’s anthropological discourse had led to the Holocaust. With Archives, R-F has provided the anti-Poliakov, apologetic response. Although she does not cite Poliakov, her book clearly has him in view: “The core of the questioning is the link from Indological philology to anthropology. In the discriminating [sic], lethal uses that have been made of the terms ‘Aryan’ and ‘Indo-Germanic’, what is at stake is indeed the collusion of linguistic and racial typologies” (23). Not only does R-F argue, against Poliakov, that “the link between Indological philology and anthropology does not necessarily take on the aspect one would expect. When it is reduced to some kind of collusion between language and race classifications, then the diversity of Indological philological practice disappears” (24); she has also undertaken the most extensive rehabilitation of Indology since Margarete Dierks’s tendentious biography of the Nazi Indologist Jakob Wilhelm Hauer (Dierks 1986). Seeking to exonerate Indology of Poliakov’s charge that “the confusion between language and blood [is] a permanent feature of German history” (Poliakov 1996: 7) by displacing its anthropological interests several decades forward, R-F has produced what can, at best, be described as a carefully curated account of German Indology in the period 1800–1890.

R-F’s thesis, however, does not work. She only succeeds in creating the impression that anthropological concerns were absent or, at least, only in the background in the beginning of Indology because she deals with the evidence selectively. As we saw, she elides several key texts—not only F. Schlegel’s Über die Sprache und Weisheit der Indier and A.W. Schlegel’s “De l’Origine des Hindous” but also Lassen’s Indische Alterthumskunde. She also does not address any of the critical literature on the subject—most surprisingly, Poliakov himself, whose The  Aryan Myth is mentioned only in the bibliography. I already noted the other significant omissions from her work, including Römer, Arvidsson, and Benes. Key topics like the emergence of comparative linguistics from comparative anatomy, its dependence on an organic metaphor, its self-conscious imitation of (the methods of) the natural sciences, and the Indologists’ own anthropological interests are not addressed.

In a lesser scholar, these omissions could be attributed to an unfamiliarity either with intellectual-historical contexts or with the sources or with the methods and evidentiary standards of critical scholarship. In a scholar of R-F’s rank, they raise questions about a work that claims to be as concerned with comprehensivity and objectivity as Archives.

For all its claims to trace the emergence of linguistic comparativism, Archives does not actually shed light on it because of its ignorance of its sources in nineteenth-century biological science.

R-F’s claim that “the time gap between the development of linguistic comparativism (as early as the first decades of the 19th century) and that of physical anthropology (in the second half of the 19th century) shows that one cannot prejudge the intentions of linguistic comparativism actors. It also brings to mind that we are dealing with two disciplines in the process of formation, whose still-unstable definitions gave rise to large debates on a European scale” (23–24) is erroneous. First, as we saw, no time gap exists. Linguistic and anthropological concerns were intertwined in the Schlegel brothers’ work. If anything, anthropological concerns had priority, since, as Abreu has shown, F. Schlegel invoked the distinction between inflected and non-inflected languages only in order to make a distinction between two orders of humans—in Timpanaro’s words, “the one group ‘divine’; the other […] ‘feral’ […] a kind of Manichean, potentially racist, mysticism which splits the human species into two” (1977: xxxiv–xxxv). Likewise, we saw that his brother August Schlegel only turned to language to validate his preexisting racial prejudices. Second, as Foucault was the first to note, “the constitution of historicity in the sphere of grammar took place in accordance with the same model as in the science of living beings” (Foucault 1994 [1970]: 280). Far from a relationship of temporal succession, linguistics and anthropology are co-constitutive of a new “historical”
understanding of man. The idea of a linguistic science independent of an anthropology is therefore chimerical. Third, the order is precisely the reverse: physical anthropology, as it emerged with Blumenbach and Soemmering, first gave rise to ideas of language comparison and classification. Fourth, contrary to R-F’s thesis that, “Indologists and comparative philologists had already started to react in the 1870s” against “the hegemonic pretensions of physical anthropology,” which were found to be “intrusive and embarrassing for specialists in comparative grammar” (195), the biological and anatomical approach dominated well into the 1880s, as the following comment by Oldenberg (1886: 399) illustrates: “The boundaries between hymns existing alongside each other were repeatedly forgotten and masses of these hymns were welded into seeming unities; expressions that were modern, smooth, and easy of comprehension replaced the rare phrases and archaic word forms—often the most valuable monuments for the researcher, whom they assist in understanding the history of the language the way, from fossil remains, a natural scientist reads the history of an organic life.”

R-F’s central thesis that racial anthropology arose as an unfortunate consequence—and unintended byproduct—of a strictly scientific comparative linguistics is not only false; the debt actually ran the other way. Rather than comparative linguistics giving rise to anthropology, the former borrowed its methods and ideas of science from comparative anatomy, botany, and paleontology. Comparative linguistics developed as an adjunct to racial anthropology: its founders were acquainted with and approvingly cited Soemmering’s, Meiners’s, and Blumenbach’s racial theories. Both Schlegel brothers were personally acquainted with the leading theoreticians of race of the day; A. W. Schlegel called Blumenbach one of “only two thinking men” in Göttingen (the other was the physicist Georg Christoph Lichtenberg); “the rest” allegedly being “just fungi growing on the walls of the university library” (A. W. Schlegel 2016: 200; italics in original).

The new science’s distinguishing characteristic was not its attention to “history” (as though previous generations had been ignorant of language’s temporal quality), but its insistence on language as specifically a man-made creation or invention. The emphasis on the “historical” analysis of language (now considered the sole “scientific” approach) was therefore tantamount to calling for an “anthropological” contemplation of language, that is, a consideration of language as it both engenders and is engendered by human developments. The idea that one can “analyse, in the light of the institutional and discursive data, how an academic discipline was constructed” (23) without attention to its underlying philosophical contexts is fundamentally erroneous. As I have argued, in the nineteenth century, linguistics and anthropology were not separate fields of inquiry. Rather, they were originally united in the concept of “history.”

Archives not only obscures this original unity as Indology’s founders explicitly conceived and developed it; it also prevents a critical reevaluation of the humanities as they developed in the Enlightenment—a development that, far from neutral, but holds the key to the great genocides of the twentieth century. Rather than vainly seeking to absolve nineteenth-century Indology of its complicity and to reestablish an unproblematic science in its original “rigour and simplicity,” we should seek to understand what this “century of history” (not coincidentally, also “the century of genocides”) has to teach us. It may be that we shall find that all our humanities are shot through with the same doubling of perspective characteristic of A. W. Schlegel, that is to say that, beneath the interest in fine arts, belles-lettres, classical languages, and poetry, lies a pervasive racism. As the malformed discipline par excellence, Indology serves as the perfect index—but only an index—of this.

Such a lengthy criticism of R-F’s work would not have been necessary were greater issues—ethical and philosophical—not at stake. By adopting categories from the natural sciences, the humanities have sought to legitimize and justify themselves. Tragically, this has crippled them in three ways. As a “science,” Indology has failed to provide either objective criteria for its investigations, or a clarification of its methods, or a logical argument for its conclusions. As a discipline in the humanities, it has failed to provide a reliable, objective history in either the Rankean sense of restricting oneself to documents alone or in the Burckhardtian sense of providing pedagogy. The histories of texts as important as the Mahābhārata provided by the Indologists proved to be so many fictions (Adluri and Bagchee 2014). Finally, Indology has also betrayed the humanities by failing to cultivate ethical values and aesthetic appreciation of texts and to enable the education or formation (Bildung) of all members of society. While claiming to be a “historical-critical” discipline, Indology has failed to provide an honest and critical assessment of its own history, above all its role in fostering the nascent discourses of race and nationalism (Wilhelm 1961; Rocher 1995). Indologists have indulged in a false and self-serving
dichotomy between the professor-expert and the most ignorant layman. But surely, the argument for a doctor should be more than that, unlike the layman, he knows cold weather is not the cause of the ’flu. Above all, Indology has failed to provide a coherent episteme, to correct for its prejudices, and to demonstrate its value to humanity. Some of these issues were raised—honestly, if inadequately—by Said in his classic Orientalism (2014 [1978]). I suggest we begin there and make the critique more pointed and accurate. Marchand, et al. have not answered the critique; they have merely dodged it by taking refuge in the fact that Said “left the Germans out of his analysis” (Marchand 2009: xviii), that he imposed “a totalizing, global view” on “European-oriental relations” (ibid., xxv), etc. But neither Marchand nor, as I have shown, R-F has examined the work of the Indologists themselves. Their analyses of the German scholars’ “scientific” contribution are based, for the most part, on the Indologists’ own self-assessments or the equally gratuitous praise of their successors. Marchand critiques “those who have followed Said’s lead and adopted the Foucauldian tactic” for “analyzing only the surfaces of the
texts they study,” but herself acknowledges that she “was not trained as an expert in any part of it [the field of oriental studies]” (ibid., xxi and xxix). Yet, without an accurate assessment of the Indologists’ scientific achievements, every “contextualization” remains superficial and contributes to the very Germanism that Schlegel sought to promote. The only form in which Indology is possible now is as a critique, above all of outdated notions of scientificity and “disciplinarity.” R-F’s work, if Marchand really thinks it means “At last […] we are getting beyond the subtlety-destroying, individuality-denying, anti-intellectual Saidian presumption that all European utterances about the ‘Orient’ are equally uncomprehending and pernicious—or uncomprehending and pernicious in exactly the same way” (2010: 230–31), should give us pause. Go on with what? How? And in whose name? The discipline must first reckon with its epistemological and ethical shortcomings, its responsibility for creating and perpetuating a painful logic of othering, and demonstrate how it wishes to rectify and rethink its place in humanities. Without such a statement, “getting beyond” has all the blindness and horror of “make America great again.”

This is the second and final part of the review titled ‘Indology: The Origin Of Racism In The Humanities’ earlier uploaded on the authors’ academia page. Please refer to the paper on the academia for the full article along with the citations and references.

Vishwa Adluri is Professor in Religion and Philosophy at Hunter College, City University of New York, USA, where he specializes in Ancient Philosophy, 20th CenturyRead more