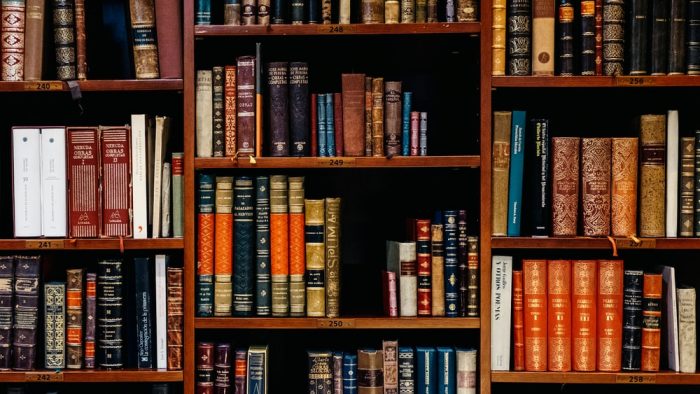 Books and knowledge have been the cornerstones of the Indic Civilisation. Historical findings tell us Bharata had some of the World’s best Universities and large library of manuscripts. Given the ingrained studious nature of the average Indian and the large number of Dharmic texts as well as texts relating to various other fields such as architecture, medicine, mathematics, astronomy and literature available, it was but natural that with advent of mechanised systems of printing, Indians too would gravitate towards the same. Publication of books took off majorly after Indians lost to the British in 1857. By 1880s there were number of self-publishing as well as publishing houses being set by industrious Indians. To monitor the burgeoning publishing industry in 1867, the British brought out ACT XXV of 1867 and later reinforced it with ACT X of 1890. Per these Acts any press was required to register every book, periodical or pamphlet published by it with the Government which compiled the records quarterly and published them it in the Gazette 1.

Despite such censures, independent and intellectual thought swelled through these publications. Among notable of the publishers of those times were Venkateswar Steam Press started in 1880, Bangiya Sahitya Parishad in 1893, Hindi Granth Karyalay in 1912, Gujarati Sahitya Parishat 1905 and others. Some of these publishing houses have survived despite all odds, first braving the British and then later, the Leftist movement which has attempted to stall the development of the Indic Civilisational thought process. For instance, the Gita Press has been a torch bearer in publishing spiritual thought and probably have the unique distinction of being researched by the Leftists and being labelled as militant in nature.

Despite less than favourable circumstances, publishers like Gita Press, Motilal Banarsidass and Chaukhamba took on the noble task of publishing and printing several texts, becoming Sarathis in the spiritual journeys of millions of readers over the years. We reached out to these publishing houses to understand how these businesses have survived over a century while facing hostile circumstances continually.

In the year 1892, a family moved from Sidhpur, Gujarat to the sacred land of Varanasi with the dream of preserving old Sanskrit texts and taking them to the common people. Led by Shri Haridas Gupt, they set up Chaukhamba Publications. Eleven years later, another family-run publication began its journey. Motilal Jain borrowed Rs. 27 from his wife to start a bookshop to sell Sanskrit books, named after his eldest son Motilal Banarsidass. Around 1918, during a baseless imprisonment by the British, Hanuman Prasad Poddarji decided to dedicate his life to the study and propagation of the Bhagavadgita. Inspired by great minds like Balgangadhar Tilak, Poddarji started the Gita Press. Today, all three have made names for themselves in the world of Indic texts. Chaukhamba are currently one of the leading publishers of Ayurvedic and Indological texts, Motilal Banarsidass are well known to students of Indology and Sanskrit for their texts and dictionaries, and just about every Hindu household has had some introduction to Gita Press, often in the form of an immaculately printed Bhagavadgita or a pocket-sized Hanuman Chalisa. 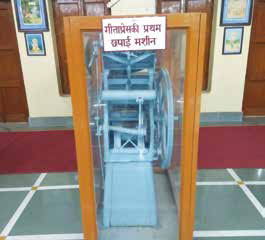 However, there were many difficulties in their paths. As Shreyas Gupta from Chaukhamba says, “In those days, for printing, wooden blocks had to be assembled for each word. As you can imagine, publishing and printing a single title would often take years! The upside to this is, our family grew close with authors who trusted us with their work. They would often stay at our residence when they visited.” Poddarji, in the initial days of the Gita Press, had to destroy two batches of Bhagavadgita copies because they were riddled with spelling errors before he set up his own press. In 1911, Sundarlal Motilal, one of Motilalji’s sons, started a branch in Amritsar but following the untimely passing of Banarsidassji, he had to move back to Lahore to run the shop there. The Amritsar branch had to be shut down. In addition to the practical difficulties of setting up and running a press in those times, the political climate too proved to be a challenge. During the Partition, a riot burned the Motilal Banarsidass shop in Lahore to the ground. The family had to relocate to newly Independent India, initially staying in Bikaner and Patna, before setting up shop in Varanasi and then moving to Delhi.

Despite these challenges, the publishing houses moved forward. Years of hard work and perseverance brought them many successes. Chaukhamba has, for example, published over 5000 books over the decades and is currently the preferred publishing house for Ayurvedic texts. “We believe in getting constant feedback from students of Ayurveda so that we can keep improving our books. We try to best understand what they want so they can learn better.” says Shreyasji. He also notes that Chaukhamba has always given priority to Indian languages, something that students appreciate. Over the years, Motilal Banarsidass has become one of the largest publishing houses in India to have their own in-house printing unit. In recognition of their dedication to Indic studies, Shantilal Jain, the only son of the Lala Banarsidassji, was awarded the first ever Padma Shri for community service through publishing in 1992. The Gita Press have since their inception sold over 1400 lakh copies of the Bhagavadgita, more than 1080 lakh copies of the Ramcharitmanas and over 250 lakh copies of various granthas like Puranas and Upanishads. 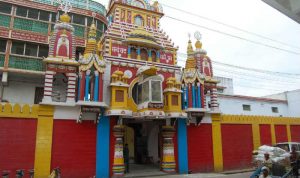 The entrance to Gita Press in Gorakhpur, inspired by architecture from Ellora and the Meenakshi temple in Madurai

What has kept these businesses going all these years? A clear vision from the start can act as a guiding force. For example, Poddarji of Gita Press was very clear that he aimed at taking the Gita and other Hindu texts to the masses. Right when the Press began its work, scholars of different languages were recruited for translations to all the major Indian languages. The Press was also keen on publishing and printing works in different languages, for example Kamban Ramayana and Andal’s Tiruppavai in Tamil and Potana Bhagavatam in Telugu. In the case of Chaukhamba, there has always been a focus on preserving the knowledge of learned scholars in print. At the beginning, rare manuscripts were collected from and edited by Pandits. These were published as fascicles every month. As the business grew, they went from publishing monthly fascicles to full books. Mahamahopadhyaya Gopinath Kaviraj, as early as 1937, observed that Chaukhamba ran the business “out of a patriotic resolve to give to the world rare and valuable Sanskrit works, hitherto available only in manuscripts and to a very limited circle.” Support from inspiring figures too has played a role in keeping these businesses going.

Dr. Rajendra Prasad, the first president of Independent India, for example, inaugurated the Gita Press in 1923. At his suggestion, Motilal Banarsidass opened a branch of the shop in Patna in 1937. The support of learned scholars and readers too are invaluable. Chaukhamba, in addition to receiving help from Pandits, reached out to many Sanskrit colleges for their publications. Rajendra Prakash Jain, a descendant of the founder of Motilal Banarsidass, currently running the publishing house, says, “Several of our foreign scholars, patrons, customers and so many academic and spiritual organizations have been instrumental in supporting MLBD to a large extent.” He also suggests that their business being family run for the past 118 years is an important factor. “The foremost reason for MLBD’s survival all through, in spite of so many ups and downs, has been its strong bond of joint family business which is the only strength and alternative for several multinational business empires that have fallen apart over the years. Many Business Schools like the Indian School of Business (ISB), Hyderabad base their teachings on such principles in India.” he says. Chaukhamba too is a family-run business and is currently run by the fifth generation of Haridas Guptji’s family. 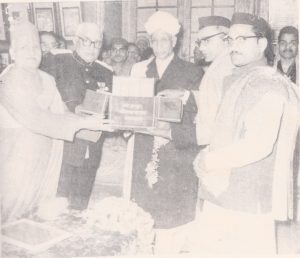 What about the future for these publishing houses? “We hope to take our texts to the general public. Right now, our readers are still mostly the ‘scholarly’ type. We’d like to make our Sanskrit and Indological texts accessible to the layman.” says Shreyasji of Chaukhamba. Rajendra Prakashji of Motilal Banarsidass Publishing House tells us that MLBD has always given priority to research. “Apart from the leading international academic books on Indology, we also bring out books collaboratively based on research and study conducted at organisations such as the Indian Council of Historical Research (ICHR), Indira Gandhi National Centre for the Arts (IGNCA), and Indian Council for Cultural Relations (ICCR) as well as Indian Council of Philosophical Research (ICPR). In the past, we have published and reprinted several research works from University Presses in USA and UK, etc.” In line with this culture of research, the publishing house set up an NGO in 2016 called MLBD Research and Resource Foundation to promote Indic studies among newer audiences. After carrying out various seminars, conferences and workshops under the Foundation, they will shortly be unveiling an e-journal, The MLBD Journal of Vedic Renaissance. Rajendra Prakashji also believes that the teachings of Indology have great relevance to modern readers. “Indology also has a lot to offer to the layman, who may not be an Indic scholar. Indology presents valuable information on ancient spiritual values relevant more than ever in today’s stressful, confusing and changing times. These eternal values like compassion, forgiveness and gratitude can play a major role in self-transformation. Indological subjects like Yoga, Meditation and Ayurveda are of particular interest to modern readers.” 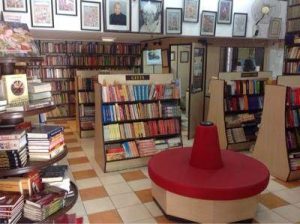 The Motilal Banarsidass shop in Delhi

He also notes that scriptures like the Bhagavadgita and the Upanishads continue to be popular reads. “For children, Indology has stories from ancient narrative traditions, like Trishastisakalapurush Charitra, Jataka Tales and Kathasaritsagar, to offer. The MLBD Research and Resource Foundation is focusing on Yoga for Children, Values for Children, Vedic Mathematics for children as well as Sanskrit for children. We hope to spread much needed information on the importance of vegetarianism in this COVID era.” he adds. Using technology too is important to reach out to modern audiences. “We at Chaukhamba hope to take our Sanskrit and Ayurveda resources to the digital platform, perhaps through an app in the near future. Starting e-books is also one of our goals.” says Shreyasji. On the subject of using technology, Rajendra Prakashji says, “We are in the process of collaborating with an American Indian digital platform to spread Indic wisdom among contemporary audiences world-wide. Future generations who are feeling imbalanced due to the pull of technology, social media and work pressures can certainly benefit from reading the Vedas, Upanishads and the Bhagvadgita.” The Gita Press too has been making use of the digital platform for their texts. Many of their publications and several issues of their magazines are currently available on their website as free e-books.

Publishers like Chaukhamba, Motilal Banarsidass and the Gita Press have shaped Sanatana Dharma as we know it. By making our texts available to the general public, they have brought the message of our vast culture into the current age, starting in times when everything went against Indic thought. As we move forward into an increasingly digital age, these publishers are transforming themselves and will no doubt find new ways to bring Indic wisdom to the people. Decades of unwavering dedication, hard work and innovation find for these publishers a special place in the history of our country.

(This piece has been authored by Aditi Gopinath and Dr. Yogini Deshpande)

Dr. Yogini Deshpande is a practicing Civil Engineer by profession. She is the Editor-in-Chief of Indic Today. Aditi Gopinath is a student of Bharatanatyam andRead more