How To Learn-Use Gita As A Book Of Yoga Science Research Guidance? 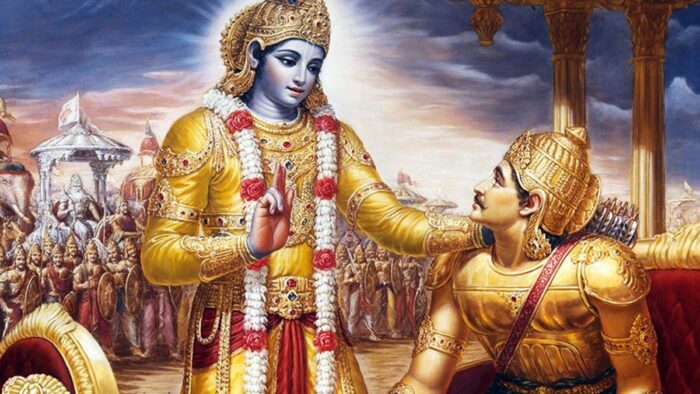 Srimad Bhagavad-Gita is an important Yoga-science research resource documented in language: Samskrutham. This aspect of Gita–yoga science research is overshadowed in the current period, mainly due to the following reasons:

(1) Overwhelming projection of Gita as ‘Hindu – the equivalent of Holy Book Bible’ from the perspective of religion, theology, cultural faith belief perspectives.

(2) Intimidating use of Gita as the anchor of teaching by schools of philosophy.

(3) Interpreted reading of text and language of Gita as

(i) Language of religion

The yoga-science technicalities of the language of Gita seem to have been lost sight of. Due to this loss of teaching-application tradition, the current audience of yoga-practitioners and science researchers seem to be losing out in gettinggita-yoga-science benefits.

In this article, an effort is made to place some pointers to make further deliberations and bring together a dialogue between modern science researchers and traditional yoga-science researchers, using Gita as the anchor.

Gita is a self-declared book of Yoga – science: How does Gita describe itself, in plain and technical samskrutam terms? What is the relation between yoga and science? What stands distinctly apart from Gita yoga connection to mysticism and philosophy? The term vijnana is a special term that covers multiple dimensions of science. Science is special and specialized knowledge in a chosen field.

The sixth chapter of Gita sets out that a yogi should explore the practice in the domain of knowledge and science in a unified way, to get total satisfaction. This is a mandate. It is not a passing suggestion!

How does a yogi pursue yoga-science, yoga in a scientific way? What are the suggested directions and guidelines within Gita? The discourse in the 7th chapter sets the framework of this exploration.

The opening verses (7-1, 7-2) set the reference, the frame of total exploration, which needs to go on till all doubts are cleared, understanding is total, and the seeker has full knowledge of what is being sought for. The teaching is meant to unify the knowledge and science stream through yoga.

Each term is conveying specific guidance to follow: asaṅśayaṅ = without leaving any trace of doubt, validations, affirmations, confirmation, samagraṅ = totally; māṅ – yathā jñāsyasi = The object being explored scientifically, the investigation methodology to engage with and explore the Supreme Divine and other manifestations; jñānaṅ tē.haṅ savijñānamidaṅ vakṣyāmi- aśēṣataḥ

Four dimensions of yoga-science: The chapter conclusion provides four dimensions of this yoga-science exploration (7-29 and 30): adhibhuta, adhi-daiva, adhiyajnam, adhyatmam. The schools of yoga-vedanta have prioritized teaching of adhyatma as ‘vedanta’: an intellectual deliberation on the nature of self and Self.

The practice tools are prioritized as ‘yoga-meditation’ for the final goal marked as ‘self/ Self – Realization. Taking the technical directive verbs: ‘yat’-‘jnatva’-

Many modern consciousness science researchers have made serious engagement with the yoga-science resources, yoga-practitioners, and yoga-masters to figure out matter-mind related footprints of consciousness-dynamics (chitta-vrutti) to develop socially beneficial applications that can be delivered through the networked agencies to the communities.

The paper plans to address the challenges science teams have faced due to the adaptation of ‘inappropriate and incorrect translations, models, and expectations’ in relation to the primary yoga-science resources.

Clarity of samskrutam language models used by science and technology researchers of yore, more specifically in Vyakarana and Nirukta ported to Nyaya-Vaisheshika school (NV YS) can provide useful hints to understand gita yoga-science and model of consciousness presented in Samkhya, Meemaamsaa, and Vedanta.

Yoga-science technical terms: Seeking the ultimate truth of the individual self, the Universe, and the processes relating self and universe for a ‘fulfilling life’ is given a technical name: atma-darshanam (Gita 6-20) where research becomes ‘subject’ focused.

The term ‘Brahma-jijnyasa’ is used when the research focus is the transformation of ‘self’ and is related to the ‘individual self with a physical material body’. This approach in its highest form is presented as ‘science of consciousness in vedanta’ (Gita 18-50 to 54; 4-24). There are multiple definitions of ‘Brahma’- the technical term from yoga. For the purpose of this paper, a specific flavor of definition anchored to Gita: 15-7 is used.

The term ‘padartha- jijnyasa’ is used when the research focus is on the outcome of consciousness which transforms as ‘self’ and self-related constituents’ yielding an ‘individual self with a physical material body’. This approach in its highest form is presented as ‘science of consciousness in texts of Ayurveda (the application of Vedas)’.

The language-technicality, models, and instructions for yoga-science research on consciousness is unique to each perspective of analysis in the above three models. This unique nature of guidance is to be used for appropriate investigation and experimental design in consciousness research.

The stepping stone towards the padartha-jijnyasa model of yoga-science research in consciousness begins with the school of Nyaya-Vaisheshika Yoga-science. This school addresses the theme of ‘Consciousness- Matter- Relations’ (Chit-Padartha) logically. The starting point is to postulate the entirety of Subject/Object, Mind/Body Unity into nine categories called ‘Dravya’ – better translated as ‘Conscious-Matter’ (chit-Padartha).

This school marks an improvisation over two other schools postulating: (a) Consciousness is a fall out of material processes and chemistry (charvaka school) (b) Consciousness is an illusory perception with no ultimate reality (Buddhist, Jain schools, called non-Vedic science, avaidika, naastika).

In terms of research investigation on consciousness by modern science teams, the ‘padartha jijnyasa’ framework of gita-yoga-science would be most appropriate and relevant for fruitful investigation. This needs a clear upgrade of Subject/Object, Mind/Body Unity from the locks of ‘matter-chemistry-energy’ limited to the listed entries in the periodic table and fundamental particles, which exclude the ‘consciousness’ factor.

Exploration of this postulate is a clear examination of the model provided in gita 7-4 starting with Nyaya-Vaisheshika school analytics and practical of Ayur-Veda (linked to Yoga and Samkhya).

In view of this, the author submits that a primary dialogue initiation needs to be made between Yoga-science and modern science researchers to figure out matter-mind related models anchored to Gita 7-4, starting with Nyaya Vaisheshika school.

This would help to get clarity on footprints of consciousness-dynamics (chitta-vrutti) in Patanjali Yoga-Sutras, to develop socially beneficial applications that can be delivered through the networked agencies to the communities.

This clarity would help to spread the yoga-science message from Gita to understand the first framework of subject-object- mind-body unity in the pairing of ‘science and Scientist’ before advancing to the portals of Samkhya (2nd chapter, meemaamsaa(3rd chapter) and Vedanta (Gita 15-15).

Summarizing–Conclusion: The tradition of learning, using gita-yoga-sciences needs to be restored for the following reasons. (a) It is necessary to understand the true total message of Gita and get the full benefit of yoga for society, to have ‘living Krishna as yogeswara amidst us’. It is learning-using Gita as visioned and narrated by Sri Krishna, as stated in Gita (18-75) by Sanjaya, the direct witness of the event.

Sanjaya says that the entire Gita is the direct teaching of yoga by yogeswara Sri Krishna. The social benefit of practicing gita-yoga-science can be tested out using four checkpoints derived from (18-78): Wherever is Krishna, the Yoga-Master, wherever is Arjuna the seeker –practitioner yogi, there shall be abundance of (i) ethical sacred spiritual and (ii) material prosperity, (iii) victory (iv) inner contentment and happiness in the bounds of the firm polity. (b) the yoga-science research needs to be restored. (c ) modern science research in the areas of cognitive science and consciousness, social science, and ethics needs to be tied down to yoga values for global welfare. (d) the relation of yoga to religion needs to be expanded and elevated to Yoga-Dharma.

This needs gita yoga-science (yoga-vijnana) research to be restored to yoga and samskrutam studies. The pointers for this model of academic work begin with the scientific study of the 7th chapter of the Gita.

Dr. BVK Sastry (Bevoor Venkatakrishna Sastry) is the Founder –President of Yoga-Samskrutham University’, Florida, USA. The vision and mission of University is to facilitate higherRead more