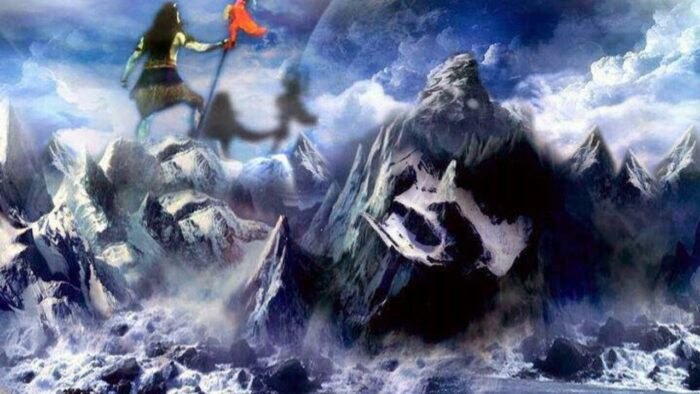 The Brihadaranyaka Upanishad which is a part of Satapatha Brahmana of Yajur Veda tells us how the Vedas and other scriptures manifested. It says that Vedas (and all scriptures) have sprang forth from the mouth of the Supreme Being via his breath.

Now, it doesn’t mean to say what it literally says. What it actually means is – from the Vak of the Supreme Lord, manifested all these Vedas. In other words, it is the vaikhari Vak of the Supreme Being which pronounced the Vedas out. Vaikhari Vak works through the medium of breath, hence here the breath of the Parameshwara is said to be the origin of the Vedas.

“As clouds of smoke proceed by themselves out of a lighted fire kindled with damp fuel, thus, verily, O Maitreyî, has been breathed forth from this great Being what we have as Rig-veda, Yagur-Veda, Sama-veda, Atharvâṅgirasas, Itihâsa (legends), Purâna (cosmogonies), Vidyâ (knowledge), the Upanishads, Slokas (verses), Sûtras (prose rules), Anuvyâkhyânas (glosses), Vyâkhyânas (commentaries). From him alone, all these were breathed forth”.

The Mokshadharmanusasana Parva which is an upa-parva of Santi-Parva of Mahabharata has a discourse by Vyasa about the creation of the Universe. He clearly states that the entire universe including its mobile and immobile creation takes its form and shape from the blueprints which are hidden in Vedas.

Even the great rishis and their names pre-exist in Vedas and later on when they take birth, their names are assigned as per the blue-print present in Vedas.

“Indeed, the Īśvara, in the beginning, created all things from the words of the Vedas. Truly, the names of the Rishis, and all else that has been created, occur in the Vedas”.

Vedas are nothing but a collection of mantras (also called riks, yajus, samans, etc., depending upon their groupings). All, these mantras are a combination of matrikas (alphabets) alone. This is why the Para-Vak (the Tripurasundari) who is also called Matrika-Devi, is said to be the mother of all the Veda Mantras in Suta Samhita.

We have already seen the non-duality between Shiva (Prana) and Shakti (Vak) in previous sections. The same is being affirmed once more by Suta Samhita as follows. It says that as Shiva appears as two viz. Shiva and Shakti; similarly the Vakrupi Matrika Devi also appears in the twofold form.

“As the Supreme Shiva appears in twofold form as Shiva and Shakti, in the same manner, Matrika Devi also exists in the twofold state”.

“Through one form she denotes Shakti and through another one she denotes Shiva. Therefore, she who manifests through the word (pada), the path to attain the paramapada is verily this vidya alone”.

However, through these Vedas alone we can know him, that is – Shiva created Vedas by transforming his Vak from apada (speechless state of silence) to pada (speech i.e., śabda-braḥman); and by using the knowledge contained in these Vedas, one transcends this state and reaches the apada state and attains oneness with the Turiya-Shiva.

“That shiva who is beyond the reach of speech hence is called apadam (no-speech i.e., turIya), with the help of his own Shakti assumes the state of pada (word i.e., speech) and pada (word or speech) again leads us to that state of apada (Shiva beyond speech). One who understands this division of apada and pada he verily sees (i.e., he becomes Brahman)”.

Originally the vāg-rūpī Tripurasundari remains in the unmanifest state of Brahman and there she has no distinction from Shiva. That state of Shiva (or Shakti) is the state of original mātrika viz. a-kāra; and then Shiva desires to become many and from that original letter “a” (akāra) expands other syllables. The same is mentioned in Aitareya Aranyaka of Rig Veda as cited below.

“He who knows this speech of which this (the mahaduktha) is a development, he is clever. ‘An (akāra)’ is the whole of speech, and manifested through different kinds of contact (consonants) and of wind (sibilants), it becomes manifold and different”.

This is the actual meaning behind the phrase of Bhagawad Gita (BG 10:33) verse which says “aksharanam a-karo ’smi |” which means, “among all the letters I am the letter A”. The same is voiced by Suta Samhita about the Matrika-Devi (who is identical with Shiva) as follows.

[Well, the purport on BG 10:33 is not over with this revelation alone; here we have only discussed why akara is chosen among all the alphabets and the reason is clear that akara is the origin of all the alphabets. Now, the second part – that is – the Bhagawad Gita verse (BG 10:33) speaks about Lord Shiva alone, would be clear by the end of this article, when we see how from the vowels and consonants Shiva creates the entire universe.]

“The one single Matrika for the benefit of the worlds became many”.

Now, let’s see how Matrika divides herself into manifold combinations. What we hear is the vaikhari part of supreme vak alone. This vaikhari alone produces the Vedas and creates all the mobile and immobile creation.

Then Matrika Devi transforms herself from sixteen vowels to thirty-two based on nasal and non-nasal forms. Then the thirty-three consonants manifest from her and finally, she exists in the twofold form of – vowels and consonants.

“Matrika’s sixteen forms of vowels become thirty-two based on the division nasal (sānunāsika), and non-nasal (niranunāsika). Then it again becomes thirty-three consonants, therefore it remains in twofold form viz. vowels and consonants”.

These Matrikas (letters) manifest as the Matrika Goddesses of Hinduism. The seven primary vowels (excluding the long ones) viz. – “a, i, u, ē, ō, aṁ, aḥ” are the ones spoken as the Supreme “sapta matrika” i.e, seven mother goddesses viz. – “brāḥmī, vaiśnavī, māhēśvarī, kaumārī, indrānī, vārāhī, and nārasimhī”.

Scriptures also classify Matrikas into eight forms and call them “ashta-matrikas” i.e, eight mother goddesses. These are the manifestations of the seven primary vowels (excluding the long ones) plus the samaṣṭhī (collection) of all the vowels grouped together (ach) viz. – “a, i, u, ē, ō, aṁ, aḥ” + “ach-group”. These eight divine goddesses then are named as – “brāḥmī, vaiśnavī, māhēśvarī, kaumārī, indrānī, vārāhī, nārasimhī and chāmuṇdā”.

These Eight matrikas are again said to group eightfold ways amongst them and thus from those combinations get created the sixty-four methods of worship, sixty-four sciences, and sixty-four classes of “yōginī” goddesses. Thus states the Brahmanda Purana regarding these sixty-four entities.

“She who should be worshipped with sixty-four offerings, She who has sixty-four sciences, and She who is being worshipped by the sixty-four kōti yōginīs in the nine different charkas”.

These are classified as follows:

“The Virāj is of thirty-three syllables; the gods are thirty-three – eight vasus, eleven rudras, twelve Adityas, Prajapati and vashatkāra (Indra)”.

“This then becomes perfect as a thousand of Brihatî verses. Its vyanjanāni (consonants) form its body, its ghōṣaḥ (svaras i.e., vowels) the Soul, its sibilants the air of the breath”.

(Therefore the interpretation of Shankara-Bhashya on Bhagawad Gita verse (BG 9:25) by Vaishnavas is totally wrong. We’ll cover that in detail separately in Appendix (Section 9) of this article)

Similarly, the Pancha-Bhutas, Jnanendriyas, Karmendriyas, Tanmatras, and all the tatwas are the manifestation from the alphabets of the “varṇamālā” only. Sri Vidya tradition followers and mantra shastra experts would know the corresponding verses from scriptures. We’ll not discuss those details here since we are going to discuss the entire creation theory through “akśarās” in the below section using the secret messages of Maheshvara Sutras!