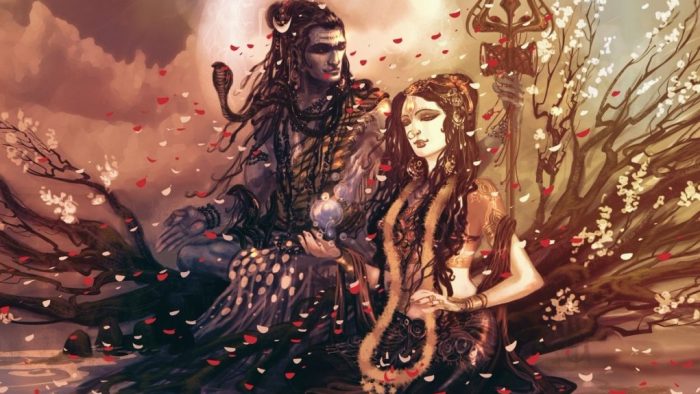 In entire Hinduism, there are only two divine beings that have been hailed as possessing an “akśara” form meaning a form composed of alphabets of the “varṇamālā”. They are Bhagawan Shiva and mother Lalitambika (who is the non-dual consort of Shiva).

The term “akśara” has another meaning as – “that which doesn’t perish (kshara)”, and in that meaning, this word has been commonly applied almost on all the godheads viz – Vishnu, Skanda, Ganesha, Surya, and even Ashini-Kumaras as well.

But in the former meaning, it has a special status, the status of being the original Supreme Being’s attributes; and scriptures have given that special status to only Shiva and Shakti!

Puranas have beautifully depicted Shiva and Shakti in their akśara form in numerous places. We’ll see here one by one, the depiction of Lord Shiva’s ‘akśaramālā’ form and then we would see Shakti’s form of akśaras.

Shiva Purana has a discussion between Brahma and Narada where Brahma narrates to him an old story of when the first time Brahma and Vishnu had witnessed lord Shiva in his magnificent akśara-svarūpa! Here is the extract of the introductory-narration from the mouth of Brahma.

“That moment the sustainer of the worlds viz. lord Vishnu started witnessing along with me (Brahma), a very beautiful and magnificent form (of lord Shiva). Hey Muni! He had five faces, ten hands, was as white in complexion as camphor, blazing with numerous types of auras, and decorated with various ornaments. He had an enormous belly, was blazing with splendor (veerya), and had all the characteristics of being a Supreme Purusha. Seeing such a form I and Hari became filled with gratitude”.

Then Brahma narrates further, how he and Hari had witnessed lord Shiva’s form composed of akśaras. These verses paint lord Shiva in such detail that anyone can visualize that akśaramālā form of the lord right in one’s own mind!

Lord Shiva and Shakti (both being one) are the actual Supreme Brahman because they assume a form and stay in Kailasha just for the sake of all of us, but otherwise, they are the formless, limitless, Supreme Being devoid of attributes. Those who have understood their nature, have nothing else left to understand!

The heart of that Yogi, the great God is ‘ma’ syllable and the seven syllables ranging from ‘ya’ to ‘sa’ are the seven elements of that lord called as vibhu. His navel is the ‘ha-kāra’ and ‘kṣa’ syllable is his fragrance”.

Even Suta Samhita of Skanda Purana has a beautiful hymn on lord Shiva’s akśaramālā form. There that hymn is composed and sung by lord Vishnu. That hymn is a pretty detailed one and it sings the attributes of lord Shiva from “akāra” to “kshakāra” entirely. Keeping the length of that hymn in mind, I’ve cited only few verses from that hymn here just for gaining an overall understanding.

“Salutations to you whose body (form) is composed of matrkas (akara to kshkara alphabets). You are the witnesser of the triad (triputi) named ‘pramaata-pramana-prameya’. Through the matrka-mantras it is you who are obtained. You are great (58). You are alone the adhara (foundation) of even matrikas. Even the original form of matrikas (i.e., a-kara) is also you.

It is you only who are denoted by pranava (omkara) etc., mahamantras. Salutations to you, who are the great Brahman (59). Existing in the two fold division of vowels and consonants, the mahamantras denote you alone. It is you alone who take up all the positions, but (in reality) you are devoid of them. Salutations to you who are such a great efficient lord (60)”.

The “akāra” to “kshakāra” – which is the set of all groups of alphabets, is called as “mātrikā”. All these alphabets are the parts of the body of Shiva. The way entire “rūpa prapaṇcha” (sum total of all forms in the world) is the form of Shiva, similarly, “nāma prapaṇcha” (sum total of all names in the world) belong to Shiva only because all names are composed of śabdas and all śabdas are composed of mātrikās. This is clearly called out in the below verses which are spoken of Vishnu. Hence there is no doubt that all the names including – ‘nārāyaṇa’, and ‘viṣṇu’ – belong to Shiva and Shakti alone.

“Although you are nishkala you have made yourself appear in the eightfold form of eight sets of alphabets; you’ve assumed the form of all words and innumerable meanings (61).

Although you are obtained through the help of words (śabda), yet you have no relation with śabdas (words) [means you are beyond the reach of words]. You are alone the one who shines with your own self effulgence, salutations to you who are such (62)”.

Brahmanda Purana has two very important hymns which are much celebrated for encompassing the entire Vedantic and Yogic knowledge in a cryptic manner within themselves. They are the hymns called ‘Lalita Sahasranama Stotra’ and ‘Lalita Trishati’.

Out of these two, the ‘Trishati’ is the most secret hymn and is not supposed to be given away to an unworthy devotee. Trishati means three-hundred names, where it is a matrix of twenty names per for fifteen ‘akśaras’, thus making them – three hundred.

“O pot-born sage, for each of the 15 akśara-s beginning with ka, there are 20 names describing them in this 300 names (trishati) which will bring fulfillment and completion to everything”.

These names look like simple names outwardly but they have the very secret ‘panchadasākśarī’ mantra which is also called as ‘panchadśī’ mantra. That mantra of fifteen syllables itself encompasses the form of Devi in terms of ‘akśaras’.

The entire hymn is praise of her from in the aspect of ‘akśaras’, hence it would not be practical to cite the entire set of three hundred verses. I’d therefore cite only the beginning few verses for references.

“Devi! You are represented by the alphabet ‘Ka’ (since you are identical with Shiva who is the creator of the universe in the form of ‘Ka’). You’re Kalyani (Being auspicious and bestower of the highest happiness of brahmananda)”.

“Devi! You are represented by the alphabet ‘ē’ (which stands for Shakti identical to Brahman). You’re mono-syllable (a-kāra which is the seed for all the ‘akśaras’ and represents the state of Brahman)”.

Similarly, the hymn Lalita Sahasranama Stotra depicts Lalita Tripurasundari as the one possessing the form of ‘akśaras’. It calls her as the one whose form is composed of ‘mātr̥kās’ as follows.

“(Lalita) whose form is of the form of varṇamāla i.e., alphabets from akara to kshakara”.

Lalita Sahasranama, after describing her physical appearance and acts such as killing of Bhandasura next it goes on to describe the subtle nature of her form which is composed of alphabets and says as follows.

Devi’s lotus-like face represents the divine vāgbhava group which is a group of five syllables in the panchadśī mantra.

“She, whose lotus-like face represents the divine Vagbhava group”.

From throat to the waist, she represents madhyakūṭa which is also called as kāmarājakūta which is a group of six syllables. Sri Bhaskararaya adds a note to this point and says that – “kāma, the desire to create universe resides in her heart”.

“From throat to the waist, she represents madhyakūṭa”.

From waist downwards till feet she represents śaktikūta. This is a group of four syllables.

“From waist downwards till feet she represents śaktikūta”.

Now if we sum up the counts of the three sets of groups discussed above, which are- five, six, and four syllables respectively in each group, we get – fifteen syllabled mantra which is the very secret ‘panchadasākśarī’ mantra which is also called as ‘panchadśī’ mantra which is found encoded in Lalita Trishati.

The same mantra Adi Shankara had also secretly encoded in his masterpiece hymn ‘Soundarya Lahari’ in stanza 32 – That stanza if read normally, it would not depict any mantra to us, but the syllables from each name, when joined it, becomes the great mantra of fifteen syllables.

Further, Suta Samhita also very clearly sings the glories of Devi in her matrika (alphabetic) form as follows. It says Matrika-Parameshwari is the mother of all the mantras.

She being of a single form, she assumes diverse forms of alphabets and with each letter, she manifests various beings in the creation. Hence whatever exists as this universe in diverse forms and names, all are truly she alone!

“The one single Matrika for the benefit of the worlds became many”.

So, with this analysis, it should be clear that Shiva and Shakti assume the form of varṇamāla and from the syllables, in their vaikhari aspect, they create the universe with all its mobile and immobile creation. Let’s discuss the creation aspect through mātrikās in detail.