Epoch Of Bharata Age As Indicated By Direct Records 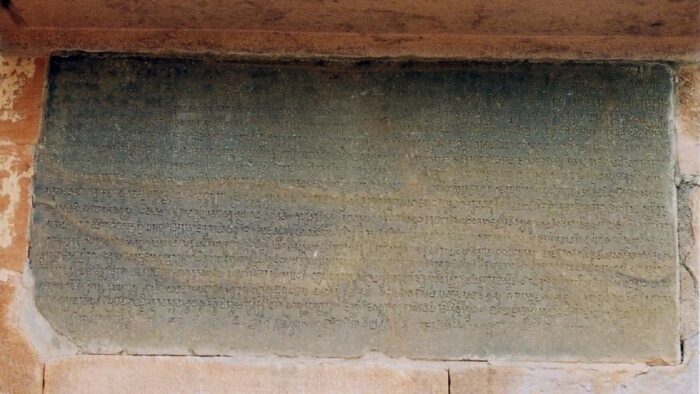 Readers will remember our observations from the previous article titled “Can Veda Shakha Pravachana rescue Bharata Itihas?” where a hoary antiquity from 3940BCE to 2860BCE for Veda Shakha Pravachana was established on sound scientific principles of precession of axis of earth. Also we had shown that the geographical descriptors of Veda Shakha Pravachana leave no doubt about their abode in the above said epoch to be centered around River Sarasvati. Let us further our studies by observing certain evidences:

Timeline of Bharata Itihasa as per Puranas[iv]

Note: As a first look at this list we have kept the list without emendations. We only show the most striking readings from Puranas.[v] Bharatas before Yudhishthira 3762-3109BCE. Physical Material of Hakra ware or Early Harappan or Ravi Phase is of this period. Lower layers of Kunal, Bhirrana have been dated to before 4000BCE. Early Shakhas like Taittiriya and Tandya are of this period. All the older references of Brahmanam texts are of this period or even before this, the period we may call Pre-Bharata. River Sarasvati is in perennial flow from Plaksha Prasravana to Vinashana. River Drishadvati is already a seasonal river. Bharatas and other clans of Veda and Puranas are seen to have spanned the whole of northern India from Gandhara-Sparshu-Aratta in west to Kashi-Videha-Kosala-Anga-Magadha in east. Karaskar-Kekaya-Uttara Kuru in north to Avanti-Matsya-Vidarbha in south. Central Region is of Kuru-Panchalas from Sarasvati to Ganga-Yamuna.

Bharata War or Yudhishthira Age 3109BCE. This is also the period of Krishna Dvaipayana Vyasa, Parikshit’s Birth etc. This period is also mentioned as Saptarshi in Magha. Many texts describe Kali as actually beginning here or 36 years afterwards after the death of Krishna. But this has no historical validity, but only a Dharmik relevance.

Magadha First Dynasty of Barhadrathas 22 Kings ~1000 Years. Period 3109-2109BCE. Physically this is Early Harappa to Mature Harappa. The evidences of human cultures across Ganga-Yamuna are not well studied and lot more needs to be done in this regard. Historically, Kurus have shifted their capital from Hastinapur on Ganga to Koushambi on Yamuna. Ikshvakus are also ruling in Saketa and adjoining region. Kashi, Videhas are also active regions in this period. Late Shakhas like Kanva-Madhyandina Vajasaneyas, Jaiminiya belong to this period. Last Pravachana of older Shakhas like Tandya, Taittiriya, Katha, Maitrayani, Aitareya and Koushitaki may also belong to the early part of this period.

Magadha Second Dynasty or Pradyotana 5 Kings- 138 Years- Period 2109-1971BCE. Physically this period denotes the end of Mature Harappa or Urban period. This suggests that Harappan Seals and Tablets of Unicorn and Wild Animals which we have conclusively shown to be commemorative of some Ashvamedhayaji dynasty of kings[vi] may be of Kurus who are contemporary rulers of the region of Ganga-Yamuna. Alternatively, Shudrabhiras mentioned in Mahabharata text as the cause of disappearance of River Sarasvati may be the owners of these Seals and the script may belong to them.

Magadha Third Dynasty or Shishunagas. 10 Kings-362 Years-Period 1971-1609BCE. Physically this is the Late Harappan period. Early Kalpa Sutras of Apastamba, Baudhayana and Ashvalayana may be in this period. Panini appears to be around this period by his closeness to Late Shakhas and his ignorance of Buddha. Shakyaputra Buddha of Ikshvaku lineage before destruction of Kshatriyas by Nanda is towards the end of this dynasty. This may be around 1700BCE. This estimate for Buddha Age is supported by certain Tibet traditions. Maitrayani Khila Text dated by Precession Method as shown before to 1900BCE is inspired by a dialogue between Bhagawan Shakayanya and Ikshvaku King Barhdratha. This is reasonable in our suggested Epoch.

Nanda Dynasty. 9 Kings-100 Years-Period 1609-1509BCE. Ochre Colored Pottery starts appearing representing this period or even might have been present from a long past in Ganga-Yamuna region. Historically, Mahapadma was a Shudraputra of the last Shishunaga King named Mahanandi. His epoch is variously mentioned as 1500 total years from Parikshit and also Saptarshi in Purvashadha. He is said to have ruled the whole earth and he destroyed all the Kshatriyas like another Bhargava Parashurama. The de-facto beginning of Kali Yuga in the sense of end of Vedic traditions and setting up of new or curtailed religious practices is ascribed to post-Nanda period. This may also be the time of Vararuchi Katyayana, the Vyakarana Vartikakara. Mimamsa of Jaimini and Badarayana may also be of this period. Late Kalpa Sutras like Hiranyakeshi and Katyayana referring to Badarayana may be of this period.

Maurya Dynasty 10 Kings-137 Years-Period of 1509-1372BCE. Punch marked silver coins from Kaushambi may be of this period. Lower Takshashila, Ahicchatra, Mathura, Varanasi all must be restudied in the light of this revolutionary Sheet Anchor of 3762BCE as Kali Age and 3109BCE as Yudhishthira Age. The so called Brahmi which should be better called Magadhi or Maurya Script appears here. But this along with Yavanani Lipi must have been existing in the Indian sub-continent for a few centuries at least before this period. But, it is possible that this art of writing and reading was restricted to certain class of people, usually dealing with Regal Court as was visible in India all the way up to pre-Printing Age when learned-ness began to be associated with reading and writing English. Literature of the Shloka form can be traced to this far only. Thus all the literature before this period is necessarily oral. This explains why we have Sutra style without Bhashyas in the texts of previous era.

Shunga Dynasty 10 Kings-112 Years-Period 1372-1260BCE. Physically this is the Painted Grey Ware period of archaeology which might be present from even older times in Ganga-Yamuna region. We must note that Pushyamitra, the founder of this dynasty has been identified by scholars as the one mentioned in Mahabhashya of Patanjali. But, alternately it could be Pushpamitras followed by Durmitra as mentioned after the Kilkila Yavanas of 3c. BCE. Also to be noted is the fact that these Shungas are mentioned as Brahman Vamsha while the later are Kshatriya or Rajanya Vamsha. This may not be really important to decide which one was mentioned by Patanjali along with Yavanas destroying Saketa, Madhyamika etc. We suggest that a further study will shed more light on this anomaly. Vedanga Jyotisha and Shloka Smritis slowly become abundant. Paper and other writing methods must have become popular and hence the archaeology of finer pottery is devoid of written records.

Andhras 30 Kings-456 Years- Period 1215-759BCE. This consists of famous Shatakarni and Haleya. Puranas have other confirmations of this period by counting Saptarshi Chara and giving total years from Nanda as 836 Years and in the 24th century from Yudhishthira Age.

This period is followed by a number of dynasties whose individual period is not mentioned. We see the number of kings and names of dynasties. Historically, we know that Gardabhila was the King of Ujjain who was destroyed by Shakas. From the discussion of Shaka Era, some important historical events and abundant epigraphic as well as numismatic material we can estimate the inner details.

Andhrabhritya 7 Kings/Abhira 10 Kings/Gardhabhila 7 Kings- 176 Years- Period 759-583BCE. This is the end of Yudhishthira Epoch of 2526 Years as mentioned by Garga as quoted in Varahamihira. This is also confirmed by historical records.

Shakas 16 Kings-Shaka Epoch of 583BCE became the civil year used as a scale other than Yudhishthira Epoch by Siddhanta Astronomers after Aryabhata. These Shakas or Scythians are mentioned as native tribal inhabitants by Greek Chronicles of 3c. BCE. They appear to have entered into NW India or Seistan long back in 1200BCE. This might explain the entry of Equus caballus or the 36 Rib horse in India. Like the present mixing of humped cattle of India by humpless imported breeds, the better horses of West Asia might have irreversibly damaged the gene-pool of 34 rib Indian Horse breed. This is a matter for paleo-zoologists to investigate. The genetics debate of R1a1 is also rendered baseless to decide ancient ancestry of Indians who are obviously very old natives of the land practicing various ways of life and a large genetic variety as is visible in Vedic and post Vedic literature of definite absolute dating as shown in the previous article.

Yavanas 8 Kings – These Yavanas are the North Western tribes near Nysa in Afghanistan near Mount Meru and Trikakud Mountain as mentioned by Greek Chronicles. They were the people where God Dionysus of Greeks was born and of whom 153 kings of ~7000 years are remembered by them. This legendary account suggests the ancient westward migration of Yavanas to Ionia.

Turushkas 14 Kings – These are Kushanas using Yona Script who later adopted Arya language as well as script as per Rabatak inscription of Kanishka discovered in 1993.

Gurundas 10 Kings/Maunas 11 Kings/Hunas 11 Kings. They also have a lot of historical support which all can be studied in due course.

Purana states that at this time there are Kilkila or Kolkila or Kainkila Yavanas along with many kings in different parts of the country. The period is around 330-320 BCE. This Kilkil is apabhramsha is clear from the various readings in Puranas with one unanimous statement that they are Yavanas. This leaves no doubt that Kilkia Greeks of Seleucid Dynasty are meant here. This province of present day Turkey is well known in Greek Chronicles of Alexander and was later in possession of Seleucus. Thus, Xandrames who was the King of Gangaridae as per Greek Chronicles of 1c. BCE may be referring to the last king of Andhrabhritya in Magadha called Chandra. It may refer to Chandramsha of Naga Dynasty of Vidisha who declares on the famous Iron Pillar of Mehrauli his victory over Bahliks and Vangas. Sandracottus of Palibothra is almost definitely Chandragupta I, the founder of Gupta Dynasty in 335BCE. The story of his annexation of Andhra throne through the Queen’s connivance and his killing the royal Heir Puloman as narrated in historical chronicles clearly suit the description of Greek Chronicles. It should be also noted that various accounts of Quintus Curtius, Diodorus Siculus, Pliny, Arrian etc. can be easily understood to be differentiating between Xandrames as contemporary to Alexander and Sandracottus in the times of Megasthenes. It is possible that stories for two different kings was confused and names mixed up. But one sure thing is that this period cannot be mapped onto Chandragupta Maurya by any stretch of imagination! In author’s humble opinion Kilikia Yavanas have turned the table for the European theory of Seleucus Nicator as the only reliable datable material in Indian History. Curiously, yes it is, but with a very correctly identifiable Indian contemporary as Chandragupta Gupta of Pataliputra.

Bahlika/Andhra/Koshala/Nishadha/Magadha. This is also the place of Pushpamitras of a Kshatriya Dynasty who performed many Vedic Rituals. This is contemporary of Yavanas and may be is the one mentioned by Patanjali Mahabhashyakara. Vindhyashakti is another well-known name from epigraphic records. Puranas also mention one Vishvashpurji in Champa in this period. A lot of epigraphic and numismatic record is available for this period. In the light of the present study, a complete re-evaluation of known records is necessary and we urge the Government to accommodate such studies.

Puranic account of Kali Age ends with the beginning of Guptas, who ruled the region up to Prayaga on Ganga.

Also note that Vikramaditya is yet to come and finds no mention in these Puranic list.

Thus, we have shown as a preliminary study, these Kali Age of 3762BCE and Yudhishthira Age of 3109BCE can help us resolve all the issues cited in the previous article and Bharata History appears to be an account of real events as any rational mind would expect from all the evidences available. 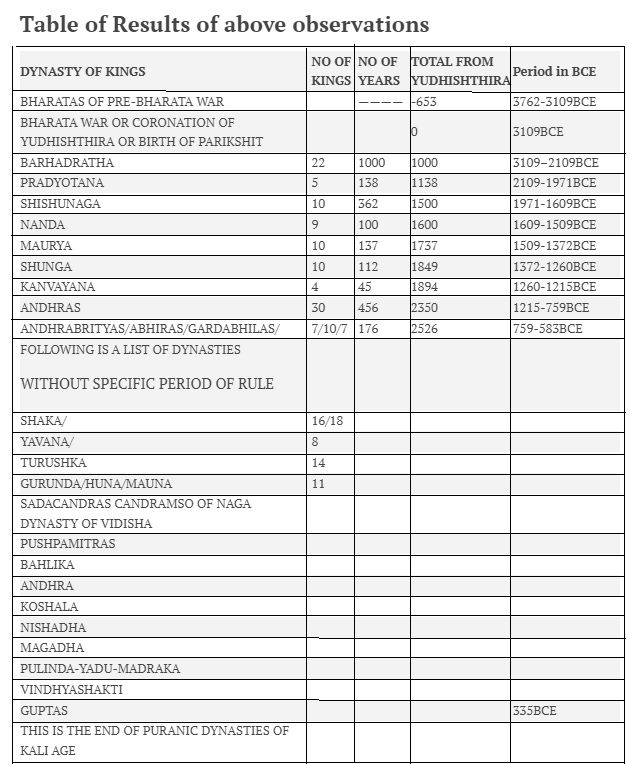 [i] Vedveer Arya: The chronology of ancient India: Victims of Concoctions and Distortions

[vi] Identification of Unicorn and Cult object. A paper by authors read at Intl. Conf. On Ancient History, Bangalore, June 2018.