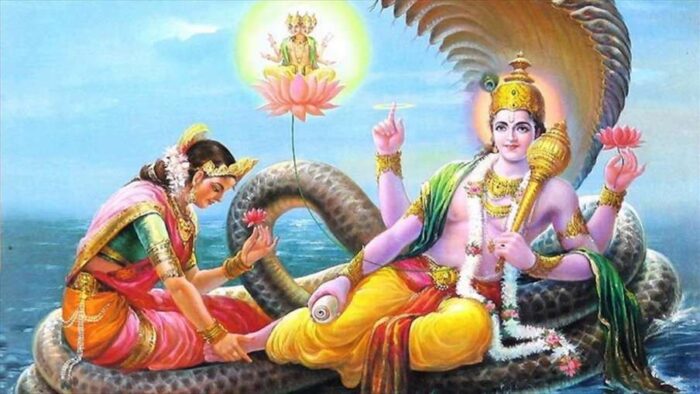 On this auspicious day of Ekadashi, we are beginning a new series highlighting the significance of each Ekadashi. Today we try to understand the essence of Shravan Maas Shukla Paksha Putrada Ekadashi

Ekadashi is a vrata I have been observing for almost twenty years. It is as simple a practice as it is powerful, and even when I have not been able to keep up with my daily puja and japa routine to the extent I would like, fasting for Ekadashi keeps me in balance and keeps the momentum of my sadhana going. There have been rough periods in my life when Ekadashi helps bring me solace and spiritual strength. It is one of the simplest vratas to observe and widely prescribed because it is universally beneficial. Simply through observing Ekadashi we can build tapobala and strengthen our spiritual practices. The blessings that come help us deepen our bhakti and purify us physically, psychically and spiritually, shedding loads of negative karmic baggage.

To observe Ekadashi, one simply needs to abstain from eating legumes and grains (and, if part of one’s diet otherwise, refrain from consuming nonvegetarian food, onions, and garlic). The fast is kept from sunrise on Ekadashi to the scheduled window of time the next day according to the panchang one uses, generally in the early morning during the first third of the day. (Sometimes the Ekadashi fast is observed on Dwadashi, depending on the timings.) There is a Vaishnava calendar that sometimes differs on dates/ timing from the general Hindu calendar. Both can be easily looked up online; I use ISKCON for the Vaishnava calendar and Drik Panchang for the traditional Hindu panchang.

Fasting can vary from nirjala (eating nothing and not even drinking water) to phalahara (taking fruits, fruit juices, and water) to simple abstention from legumes and grains. If for medical or other reasons it is not possible to completely fast, e.g., in the case of individuals with diabetes or young children or elderly family members, then one can take items like sabudana (tapioca pearls), quinoa and other fasting foods that are filling but still compliant with the vrata. What is important is to keep the diet as simple as possible so that one’s energy and mind space is turned towards devotional practice and meditation as much as possible. Sometimes when ‘fasting’ for Ekadashi, we get so obsessed with making special recipes for elaborate dishes that we lose the forest for the trees.

There are more advanced practices that can also be followed, such as staying awake all night during Ekadashi, observing special related fasts on days surrounding Ekadashi, etc., but if one simply follows the fasting practices set forth above, to the sincere best of one’s abilities, and spends time in Hari smarana (the remembrance of Hari) then that is all that is needed. For a more detailed study, Ekadasi Mahatmya, produced by ISKCON in English, is a wonderful book, freely available online.

Every single Ekadashi, the day that occurs on the eleventh day of the lunar cycle, both in the Shukla phase of the moon (the period from Amavasya (New Moon) to Purnima (Full Moon)) and the Krishna paksha (the period from Purnima to Amavasya), has its own significance, associated rites, lore, and rasa.

Today is the Ekadashi that occurs during the Shukla Paksha of Shravana Masa. This particular Ekadashi is known as Pavitropana Ekadashi and also as Putrada Ekadashi. The Bhavishya Purana narrates the katha associated with this Ekadashi, which unfolds through a dialogue between Yudhishthira and Sri Krishna.

Sri Krishna recounts that at the dawn of Dvapara Yuga (the third of the four yugas before Kali Yuga; a yuga that is twice as long as Kali Yuga where Dharma in the form of the bull has only the two pillars of truth and compassion to stand on), there was once a king by the name of Mahijita, who ruled over Mahishmati. He was married but had no son, which made him very unhappy.

He shared his concern with his advisors. He told them that he had committed no sin; he had never stolen money or looted the offerings to the devas or brahmanas. When he fought wars and conquered kingdoms, he followed the rules and regulations of warfare and protected his subjects as if they were his own children. He goes on to say that he would even punish his own relatives if they broke the law, and if his enemies were well-intentioned and dharmic, he would embrace them. He wanted to understand why, despite living a lifestyle ordained by the Vedas, he was still sonless.

As an aside, from this brief speech uttered by the king, we can understand what a dharmic and principled ruler he was. This gives us a glimpse into the raja dharma envisioned by our rishis and acharyas and provides a model of what good governance means. How much stronger would our societies and nations be if our political leadership followed these dharmic observances!

The king’s advisors wanted to help him. They visited various rishis at different ashrams. After some time, they came upon the exalted Lomasha Rishi. He was a rishi of such attainment that his life span matched that of Brahma. He knew the past, present, and future. After each kalpa passed, one single hair would fall out of his body. One kalpa is equal to twelve hours of Brahma’s day, which in our time, equals 4,320,000,000 years. Lomasha Rishi was also a wonderful storyteller who narrated many of the stories found in the Puranas and the Mahabharata. He spent time with the Pandavas consoling them during their forest exile.

The rishi assured the king’s advisors that he would do everything he could to solve their problem. He said that sages like him have only one interest: helping others. The advisors praised him, saying there was no better sage in the entire world. They described the plight of the king, which afflicted them with sadness as well.

Lomasha Rishi heard their sincere request and meditated deeply for a moment. He immediately understood the problem. He explained to the advisors that the king was a merchant in his past life who traveled to many villages to trade his merchandise. Once, he was thirsty and went to a pond to drink water. Just as he was about to slake his thirst, a cow and her newborn calf arrived. The cow and calf were suffering from the heat and dehydrated, but when they started to drink, the merchant pushed them aside and selfishly drank the water first.

Lomasha Rishi explained that this offense against the cow and her calf resulted in the king being bereft of a son. But on account of his other good deeds, he was made ruler over a great kingdom in this life and his reign was peaceful.

This, too, gives us a nuanced view of karma. Dharma cares for all sentient beings, all life forms, and puts as much value on the wellbeing of animals and plants as it does humans. This one act that we would brush off as a harmless nothing today was enough to deprive the king of a child in his next life; that is the reverence with which cows and all sentient beings are held in our tradition. Yet, because he was also meritorious in other ways, he also was destined to become a great king. Individuals are not evil or good; they are a combination of good qualities and bad qualities, of virtuous conduct and ill-considered lapses of judgement, and the fruits of their karma are borne accordingly to reflect that mix.

The advisors said that in the Vedic tradition, whenever there was an act of demerit, a commission of a wrongdoing, there was also prayaschitta or a form of penance to overcome that demerit. They asked what could be done now to overcome the karmic obstacle for the king.

Lomasha Rishi said that on the Putrada Ekadashi that occurs during the Shukla Paksha of Shravana masa, the king and all of the advisors should fast and stay awake all night, observing all the rules of the vrata. The advisors should then transfer whatever merits they attained through the vrata to the king. In that way, he would be blessed in time with a fine son.

Sri Krishna concludes the story, “Whoever desires happiness in this world and the next should certainly fast from all grains and legumes on this holy day. Indeed, whoever simply hears the glories of Putrada Ekadashi becomes completely free of all sins, is blessed with a good son, and surely ascends to heaven after death.”

It should be noted that one does not have to observe this Ekadashi with the specific desire of bearing a son. For those who are spiritually inclined, it is enough to treat Sri Krishna as one’s son and to pray for the bond of devotion to be strengthened between ourselves and Ishwara.

Another custom related to Pavitropana Ekadashi is the placing of specially threaded garlands on deities of Vishnu on Dwadashi, the day after this Ekadashi. This is especially prevalent in the southern part of India. The placing of these garlands is meant to be a gesture of seeking forgiveness for seva aparadha (faults and shortcomings in serving the deity).

Also, starting with Pavitropana Ekadashi, the Jhulan Yatra festival is celebrated over five days until Purnima. A swing is decorated with beautiful flowers and creepers. Then, Srimati Radharani and Sri Krishna are placed into the swing and gently swung back and forth.